Jeremy went into work a bit late today in order to help me take Raelynn for a vaccination. Because all of this is in Chinese, my husband takes responsibility for paying attention to when she's had to go in the past and made sure all her shots are in order. Now it seems we only have to deal with this once a year, which is great because Raelynn is now of the age where she knows what's about to go down. Poor girl.

We get to the vaccination place and it looks a lot cleaner than I remember. Maybe it felt dirtier because there were more people in there on my previous visits though I haven't been in a while. Before Raelynn started going to school, my in-laws would take her. We waited on line to check in and a woman in front of us was asking a million inane questions. She was annoying everyone on line right along with us. It's hot in there and I notice with mild amusement, there's a wall unit A/C set to 26 Celcius and the window beside it is open. Brilliant. Only in Asia. As the idiotic woman with too many questions gabbed away, Raelynn began to realize what was about to happen and began to get squirmy and upset. I struggled to hold on to her, bribing her with the promise of ice cream in her very near future which seemed to do the trick. Temporarily. We finally finish checking in and then have to wait on the line for the actual vaccination.

In that room, they had the A/C set to 26 Celcius as well, but at least the windows were closed so it was a lot cooler in there. And again, Stupid-Asking-Too-Many-Questions-Lady was in front, asking more stupid questions, to the point that Raelynn and the 2 other children in line began freaking out because they definitely knew what was in store for them. The people behind us complained to my husband about this woman and how her prolonging the process for everyone was making the other children upset when it should really be a quick thing. I agreed. I had Jeremy restrain Raelynn while the nurse administered the shot. When she cried, I cried, because I'm 9 months pregnant and because I cannot stand for Raelynn to be in any pain. When she hurts, I hurt. So I hugged her and kissed her and assured her we were going home for ice cream immediately.

As we were leaving the hospital parking lot, Raelynn noticed a man just outside the parking gate with a big bunch of balloons. You see these guys everywhere here and I thought this guy's pretty damn smart to sit outside the children's hospital where many crying children come and go. What a brilliant way to sell off your balloons. Many times when we see these kinds of people at the shopping malls or beaches, we placate Raelynn with a "we'll see" but today seemed like a perfect time to give in and buy her a balloon. Jeremy pulled up to him and, at Raelynn's request, asked for the Spongebob balloon.

And now we had a happy kid again, completely forgetting the horrible sting moments before from her vaccination. She had a Spongebob balloon and she was going to get a big bowl of ice cream. Things were looking up.

We arrive home shortly after and as Jeremy and I frantically turn on both A/C units to full blast arctic cold, I notice something. The Spongebob balloon seems to have an unintentional wang. Seriously. 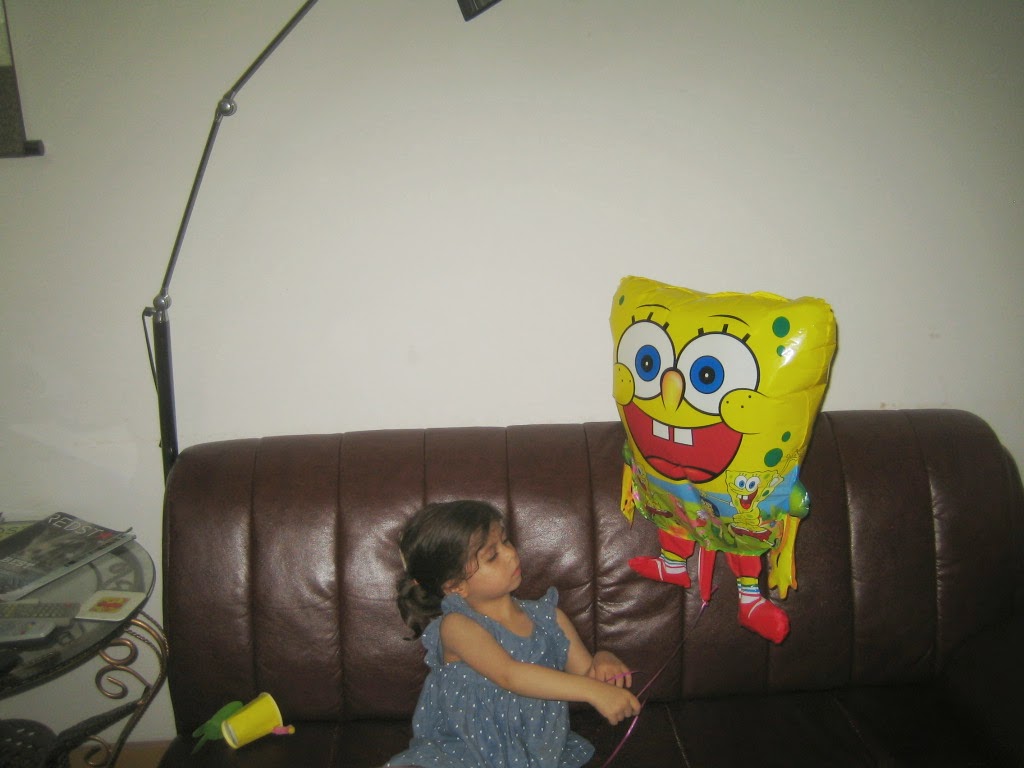 Raelynn almost seems to be wondering the same thing. Here's a better view of our indecently exposed Spongebob... 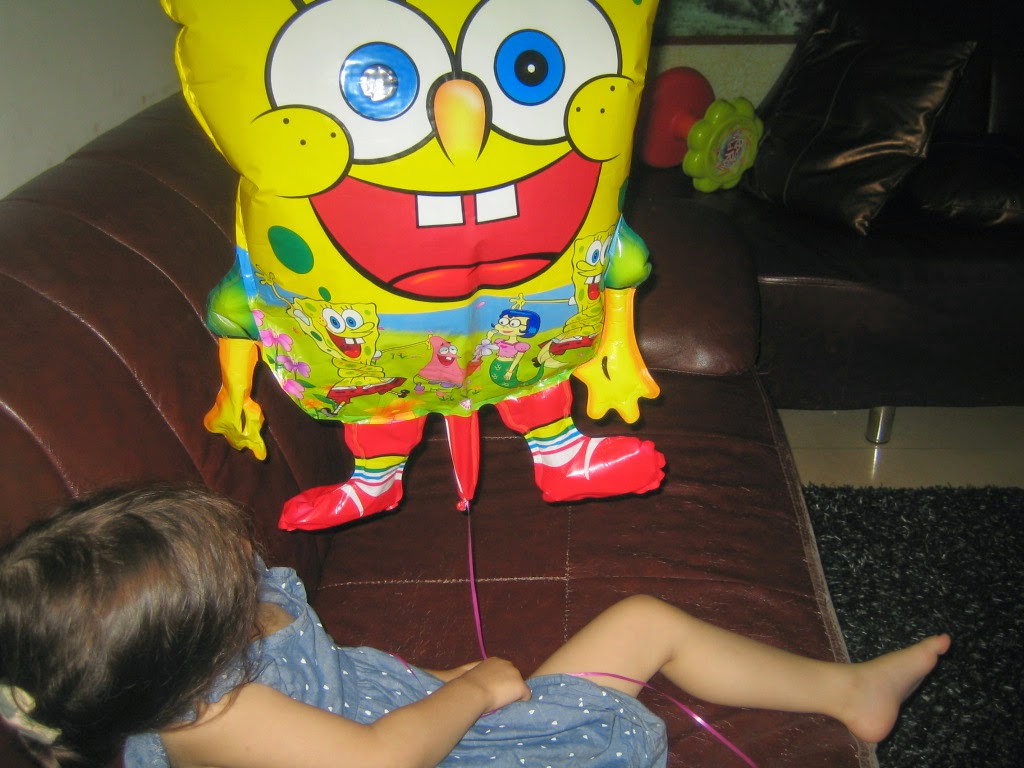 It was all we could do to not keel over and die from laughter once we realized it looked like Spongebob was hanging loose. Next time, we'll buy her a genital-free balloon.
Posted by JQ at 6:24 AM