Someone Made Me Eat This: Bizarro Edition

Something VERY strange is going on, you guys. MIL is actually being useful AND helpful. AND! She's actually making different foods for us daily.

I'm as shocked as you are, perhaps even more so.

Yesterday, she surprised me by coming to take Raelynn out for a few hours in the morning so I could spend time with Seoul and rest. And then she brought Raelynn home and didn't come back until dinner! For that dinner, I regret that I didn't take photos (camera needed charging after taking so many photos of Seoul) because she made us these really meaty pork chops that fell off the bone. They were good. So good, I couldn't believe she made them. She also made a shrimp dish and some soup I didn't care for much but is traditional to eat after a baby. It wasn't horrible but I would have preferred not to eat it. I only ate it because I was "trying to show my nice" as my husband puts it. Seriously, he says that. But I was eating it as a way of having leverage if she does overstep her bounds..."Hey Honey, remember the time your mom made that weird soup and I ate it even though I didn't want to and I didn't complain? Yeah, so here's the favor I'm calling in..."

Today, she tried to take Raelynn out in the morning but Miss Lazy apparently refused to get up! She slept the whole night in her room like a good girl and at around 6am, got up and came to our room. She snuggled up right next to me and after a long night of nursing a very hungry little piggy of a newborn, I zonked right out. MIL didn't stick around to annoy us either. When Raelynn couldn't be extracted from sleep, she left.

And she didn't come back until dinner time. I have to give her a huge chunk of respect for this evening's dinner because we had a huge torrential downpour. I figured she wouldn't show up until later because of the rain but she walked through that storm to our house just to make us dinner. How could I possibly be rude to her in any way after that? The storm didn't last very long - maybe 30 or 40 minutes. She could have waited but she walked in that mess. I salute you for that MIL, and for tonight's dinner.

No longer is she trying to force me to eat the kinds of foods she thinks are delicious all the time. Sure, I get food like that from her (like the strange traditional soup), but she's now finally realizing that I need foods that I find delicious. I'm beginning to really suspect my husband of having interceded on my behalf because this is what she made us for dinner... 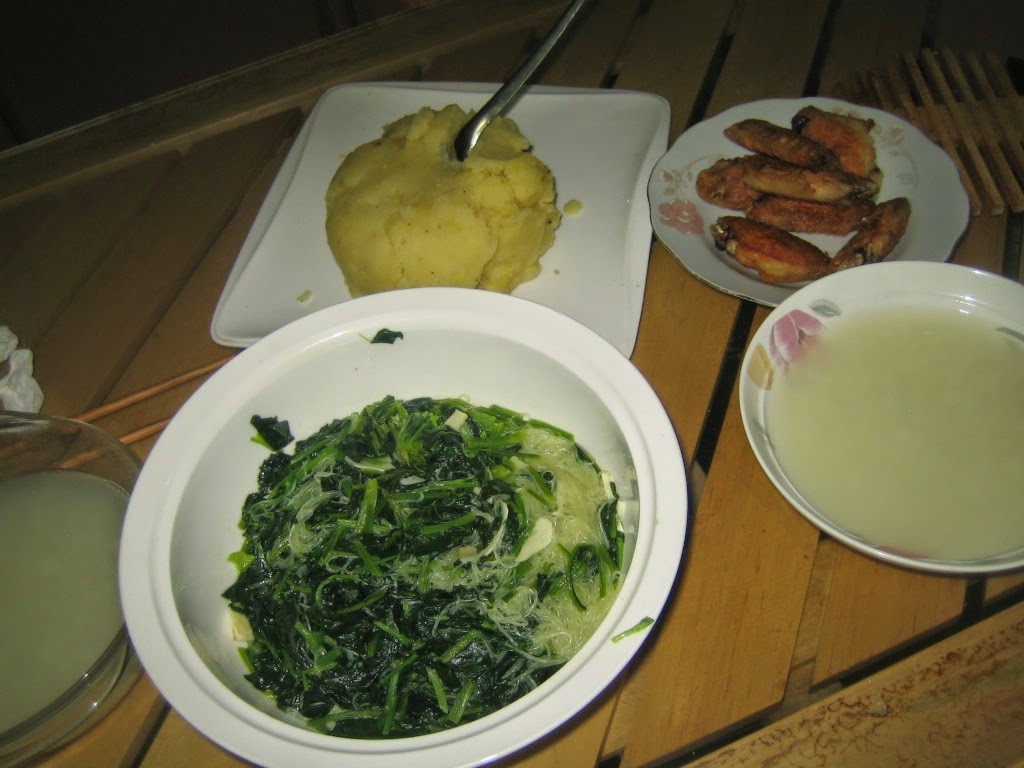 What do we have here? We have a spinach and garlic noodle dish which tasted way better than this photo lets on. Behind that, she made some sort of mashed potato wannabe thing which was a solid effort for her. Mine, of course, are way better, but I really appreciate her making this and that it actually tasted good enough that I didn't have to fake that I enjoyed it. Same with those chicken wings. The xifan - this kind is a soup of watery rice - was blah though. I took a few bites to be polite. Not pictured: the special soup from yesterday that she made just for me. Just as I was enjoying what I thought was a normal meal, here comes that damn traditional shit again. Urgh.

Maybe I'm just overtired from having another baby and am hallucinating normal-ish food. Is that possible?

Then again, my kitchen looked like this after so I think everything is back to normal... 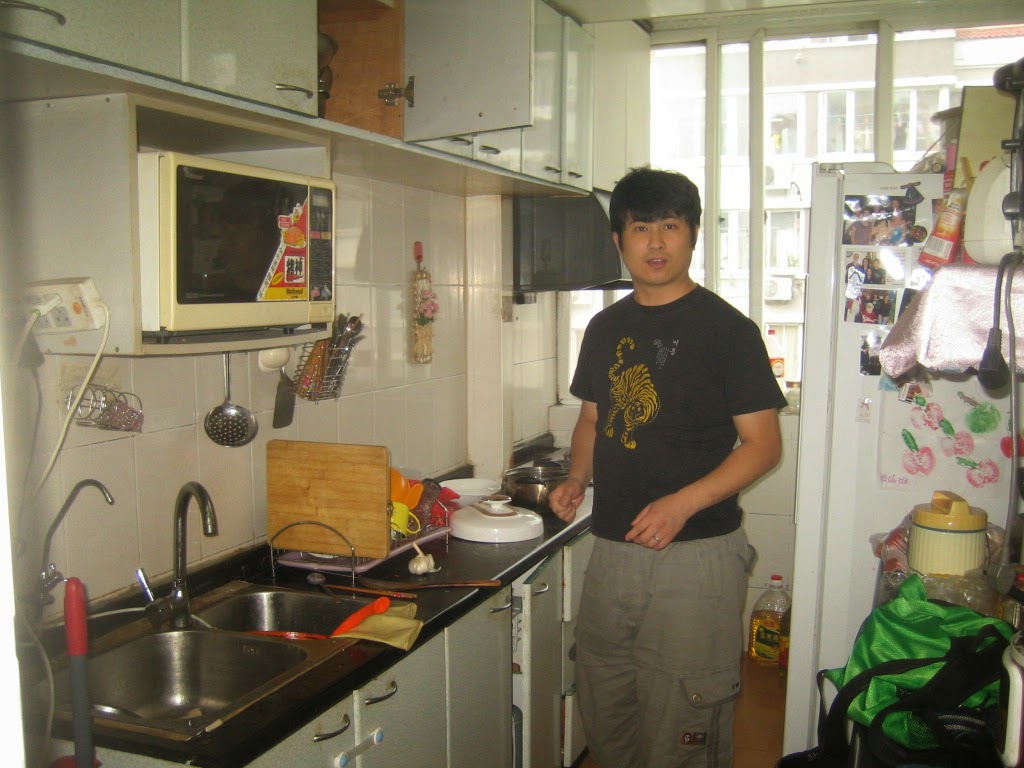 No worries. Jeremy cleaned it up. Maybe I am dreaming after all...
Posted by JQ at 6:36 AM