Apparently, MIL fancies herself a Martha Stewart of sorts. At least that is all I can possibly conclude after my discoveries today. Let's take a look at the lovely things MIL has done to our home while we've been toiling away the day... 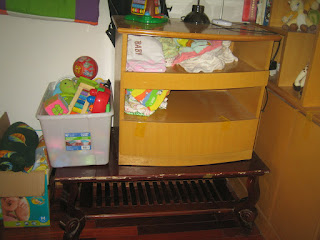 Yes, folks. THIS is what I come home to find in the baby's room. That little shelving unit plopped on top of that table. Let me first explain about this table. It was in our living room/dining area along the wall, out of the way. But over the Chinese holiday, it was bothering my husband because he felt it was taking up too much space. Not one to argue when it comes to decluttering, I didn't protest when he moved it. Until I saw he put it in Raelynn's room. He said he was only sticking it in there until his parents could come get it and bring it to their home (it was their table to begin with). It's been a week though and this damn table is still in Raelynn's room. And so, instead of moving the fucking thing OUT of the baby's room and OUT of our home, MIL has chosen to move it UNDERNEATH this stupid shelving unit. Because it's so safe to stack furniture on top of furniture in a baby's room of all fucking places. What a total moron! 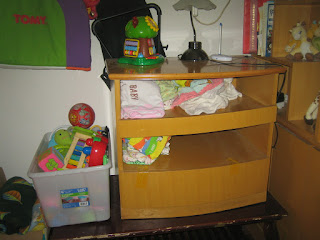 Here is another shot so you can see that it is now more difficult for Raelynn to reach her toys. Especially that treehouse thing on top, which she loves. Thanks MIL. 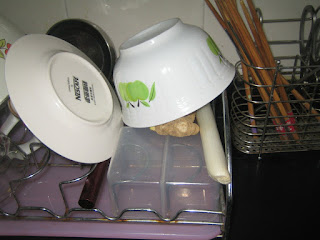 On to the kitchen, where MIL has decided to make the dish rack multi-functional. How? Why, by using it as a place to stick ginger root and green onions of course! Le duh! Martha Stewart would be so proud. 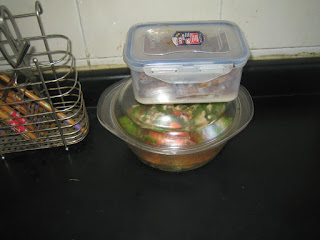 And finally, we have her favorite thing: unrefrigerated mystery foods sitting out for an undetermined amount of time. There is a shrimp dish on the bottom. Martha wouldn't approve of the ugly little heads still attached to them but oh well. She's cooked this with cucumber (why?!?) and egg. The other dish in the plastic container on top is pork ribs, which would be appetizing except for the thick layer of congealed fat and oil at the bottom. Like it's been sitting for a whiiiiiiiiiiiiiiiiiile. I asked MIL why she didn't put it in the refrigerator and she told me that she'd made it recently so not to worry and it was fine. I'm sorry but I have never seen fat and oil unite like that in a short amount of time. Her concept of time vastly differs from mine, evidently. Who's coming for dinner? Yeah, me neither. I'm off to make something that won't cause us all diarrhea now.
Posted by JQ at 1:56 AM