Once the smoke settles from the fireworks that were lit to celebrate the official start of the Chinese New Year the night before, you pry yourself out of bed and dress nice. Then, you take your hungover self out to visit all your older relatives. You start with the oldest and work on down to the younger ones, bringing each a gift of some kind. If you haven't yet read about last year's old people visits, better go here to check it out.

Each year, we have brought beer. It's always well-received. Chinese people sure love their beer. I can't say I blame them. MIL of course had the dumbest present of all. Well, I thought it was dumb. She would of course pick the lamest thing to give someone - a giant box of eggs. Yes, chicken eggs. They sell them in these huge, red boxes around this time of year. I think because she's a boring old lady, she has to give out a gift as dull as she is. Maybe the recipients are happy to get eggs but I suspect the beer is a much more treasured gift.

We went to pick her up from her and FIL's house, just a few blocks away. Jeremy went upstairs to get her while I waited in the car with Raelynn and Seoul. FIL had to stay at their house to receive the visitors that would come for them. MIL's 2 boxes of eggs were almost as large as our 2 cases of beer. She wound up having to ride with them on her lap in the front seat. I stifled a chuckle as she struggled to figure out the seatbelt. She has this problem EVERY time she rides in the car and Jeremy has to help her. I didn't realize seatbelts were that complicated, but there you go. 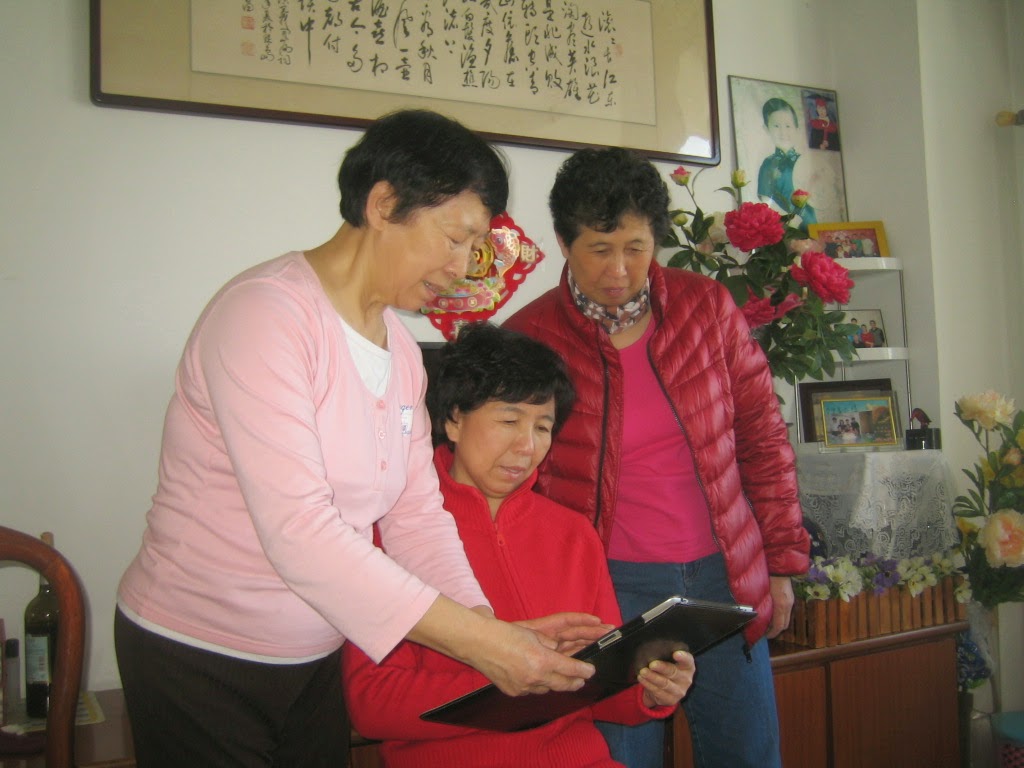 She's the one in the light pink on the left. Notice I said pink. MIL is wearing bright pink and I forget how the one in the middle wearing actual red is related to everyone. Keeping Jeremy's relatives straight is very difficult! 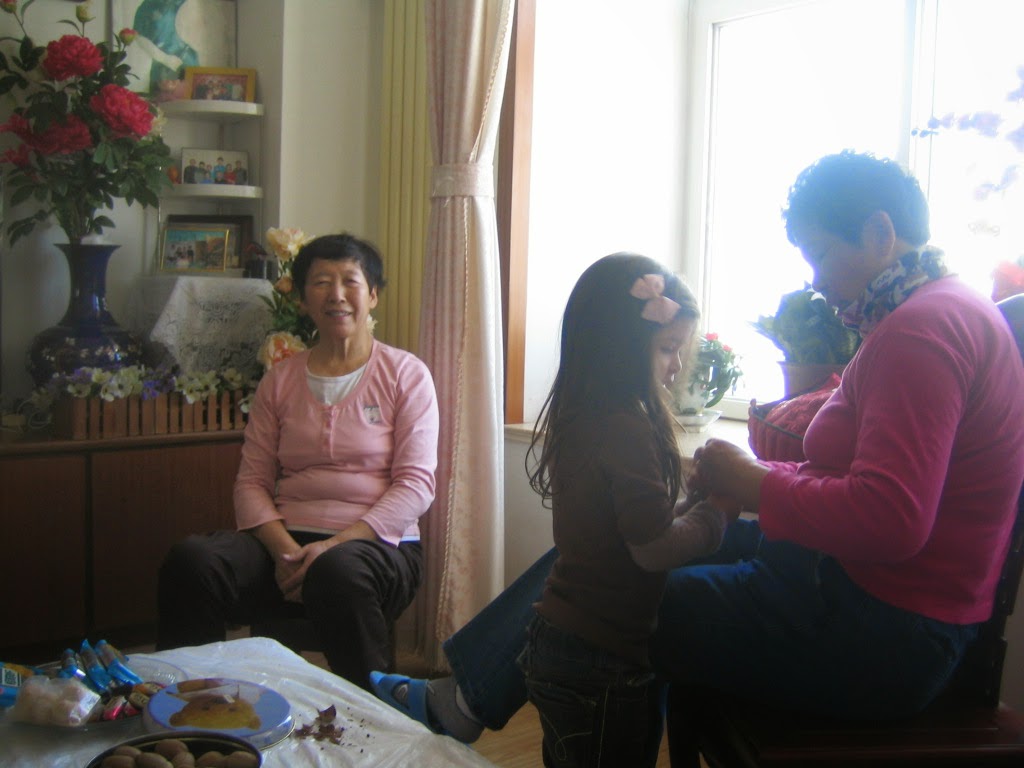 This year, the smog situation was much better. You could actually enjoy the view from their 19th floor apartment. 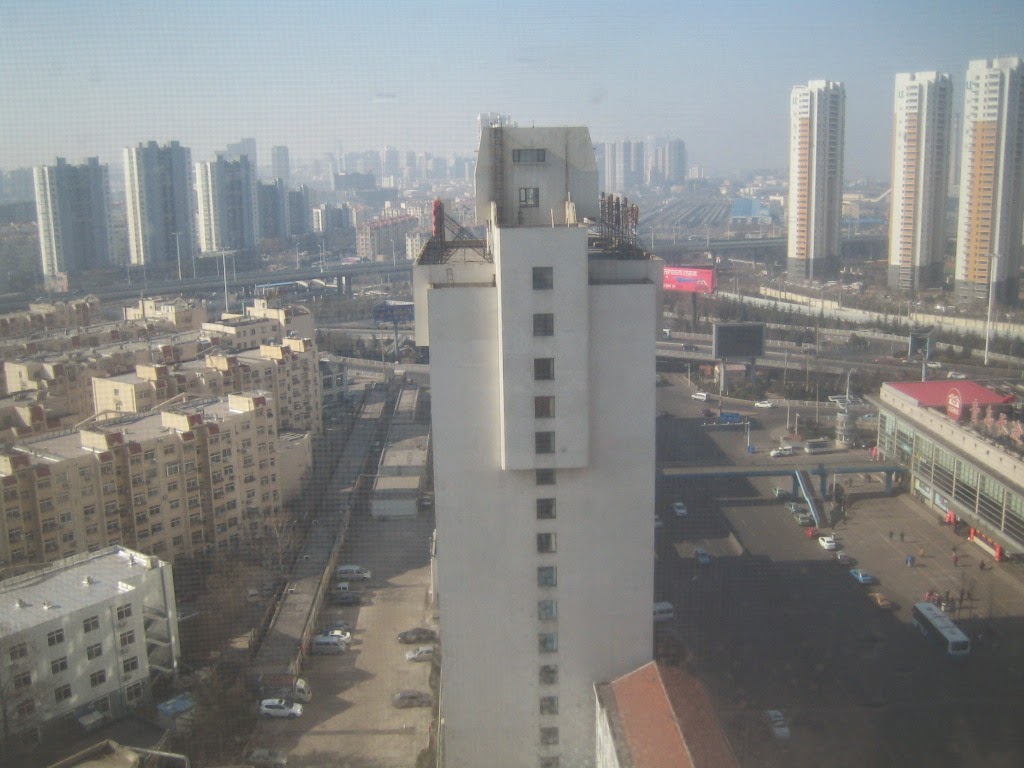 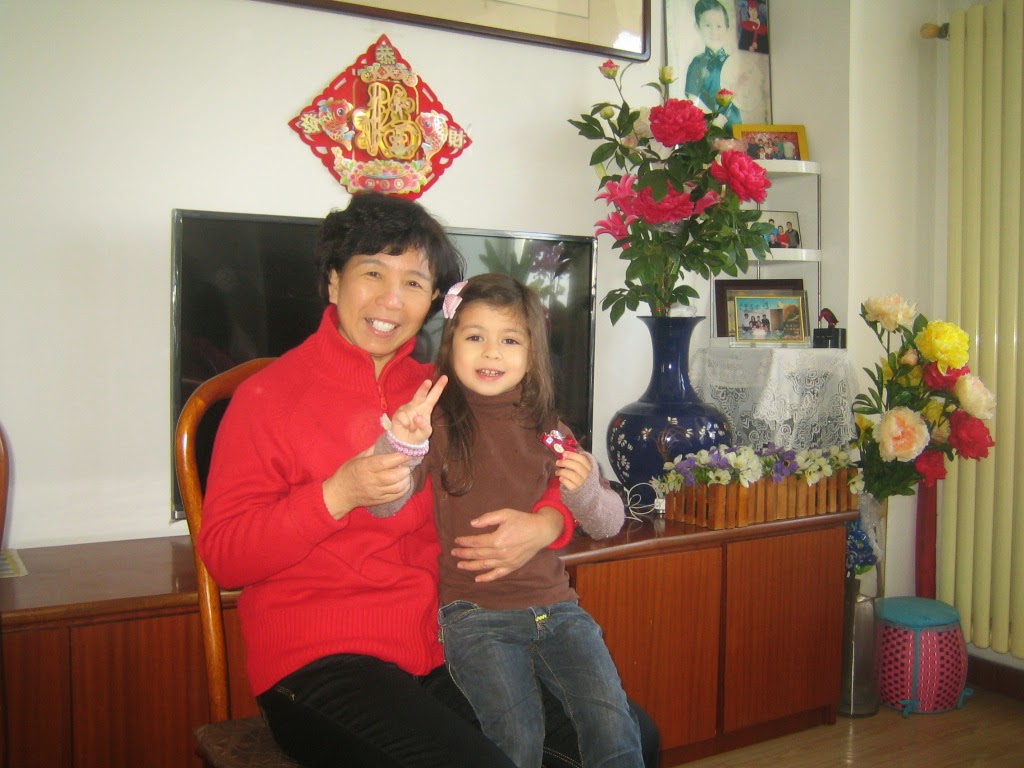 Unlike last year, Raelynn is now happy to pose for photos with the relatives. Good girl! 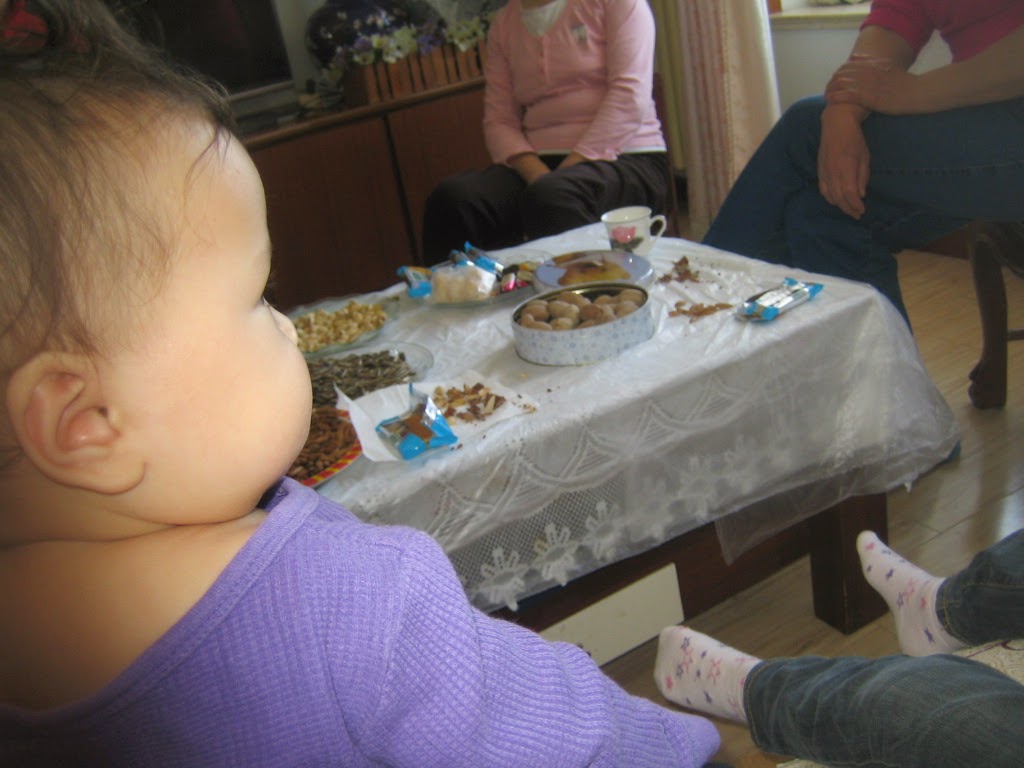 I kept having to restrain Seoul from trying to grab at the coffee table. It's customary to put out little snacks of fruit, nuts and seeds. Additionally, you serve tea to your guests. It's kind of nice.

After about an hour and a half, we then packed up and ventured to MIL's older brother and his wife Jumu's house. But this year, there's an exciting twist...they moved! Yes way!

See, Jumu grew up in the Taidong part of Qingdao. I've mentioned it before as it's a great place to shop. According to Jeremy, Jumu missed the Taidong area and wanted to move back. Never mind that her dumpy apartment was just 15 minutes away. In any event, now they're renting a new place. I'm not sure what they've done with the old place, which they own. Maybe they are renting it but I cannot even fathom who would be stupid or crazy enough to rent that place out. Yuck!

So, I bet you're wondering how Jumu's new place looks? Of course you are! Come see! 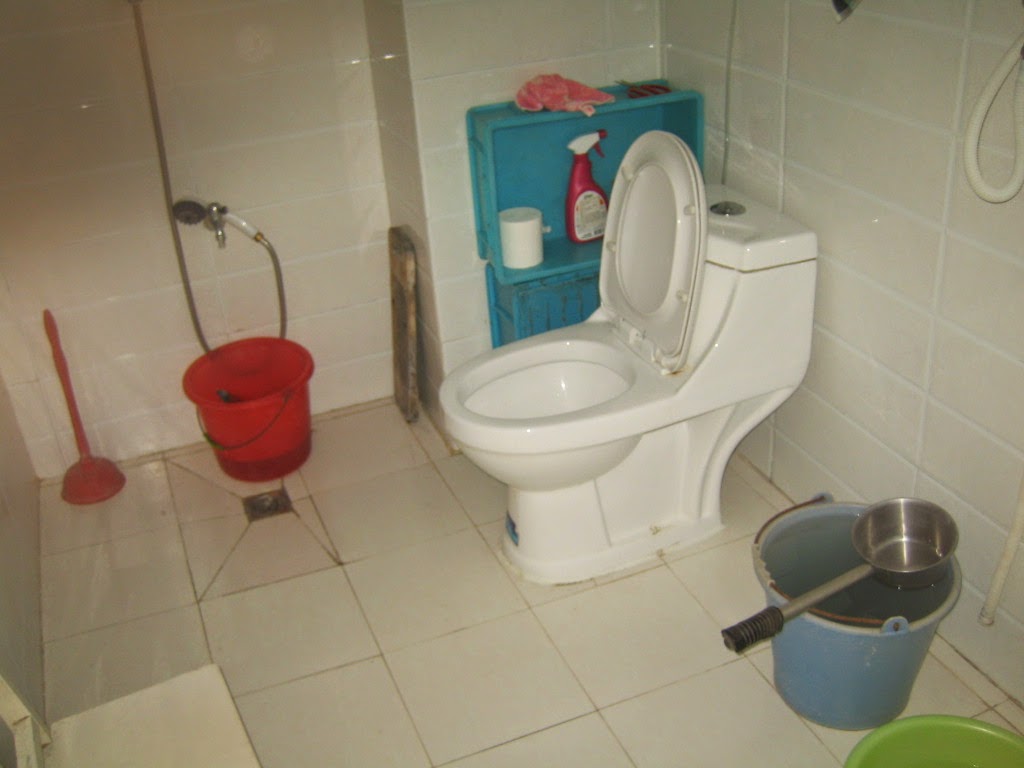 I'll start with the most shocking of all - they have a nice, big bathroom! A real toilet that flushes! Amazing! 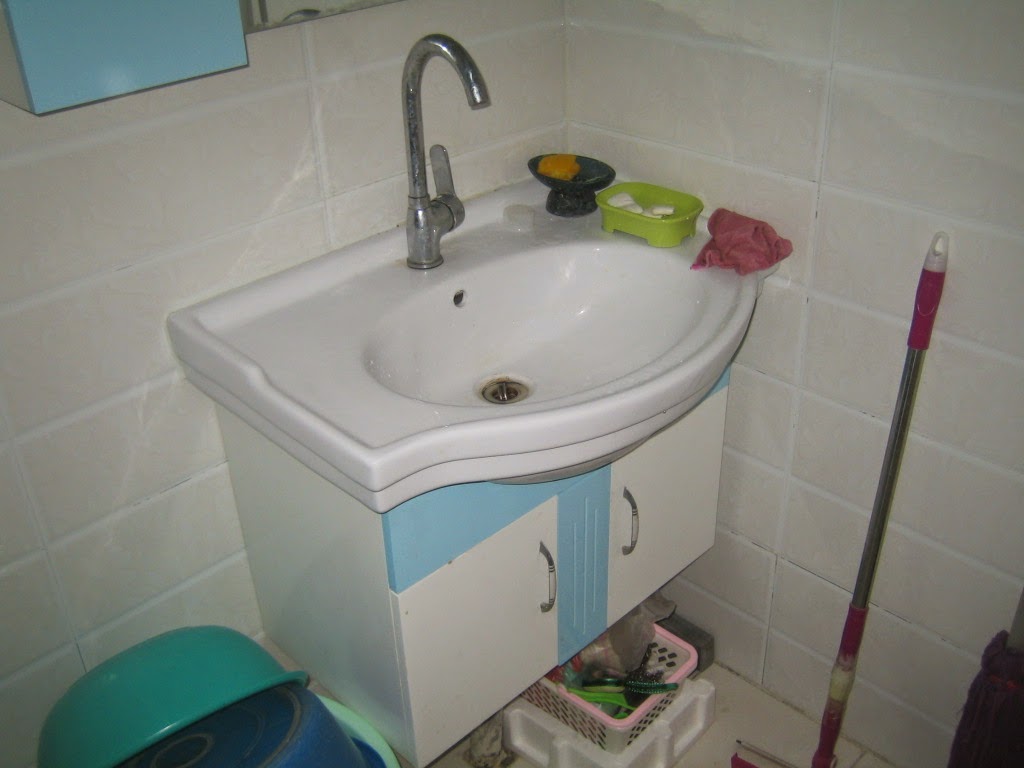 And a real sink. No bucket underneath it to catch the water. That's real plumbing! 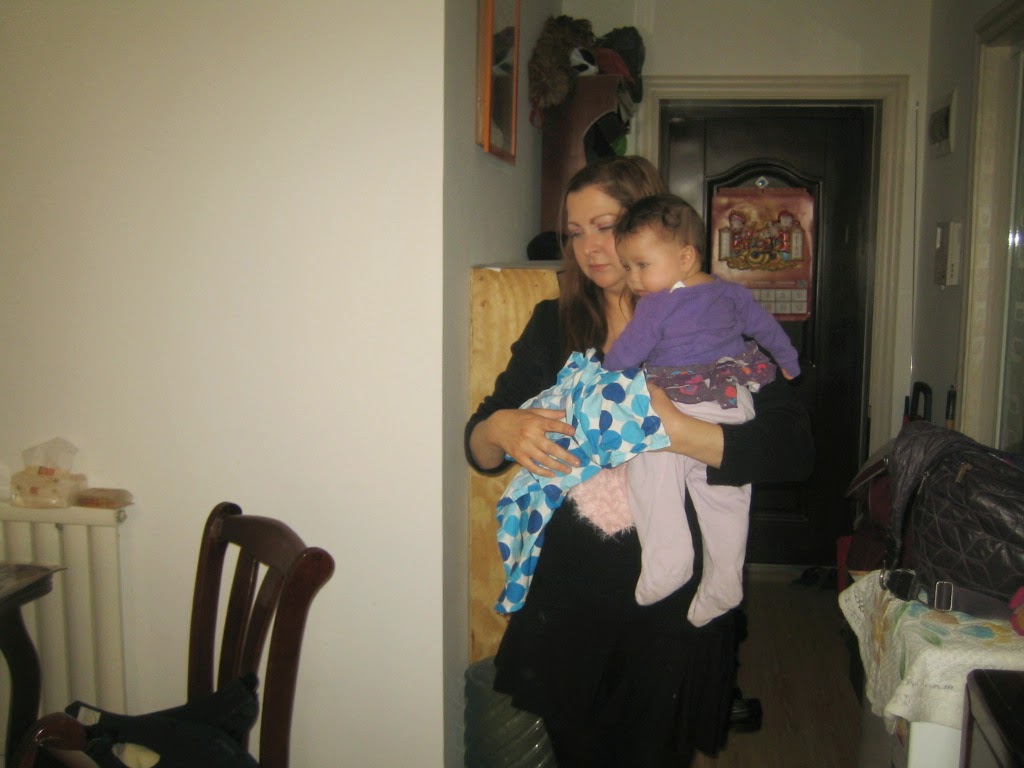 The entry behind me isn't too bad. So much better than what they had before. You could barely get in or our without smashing into the walls. 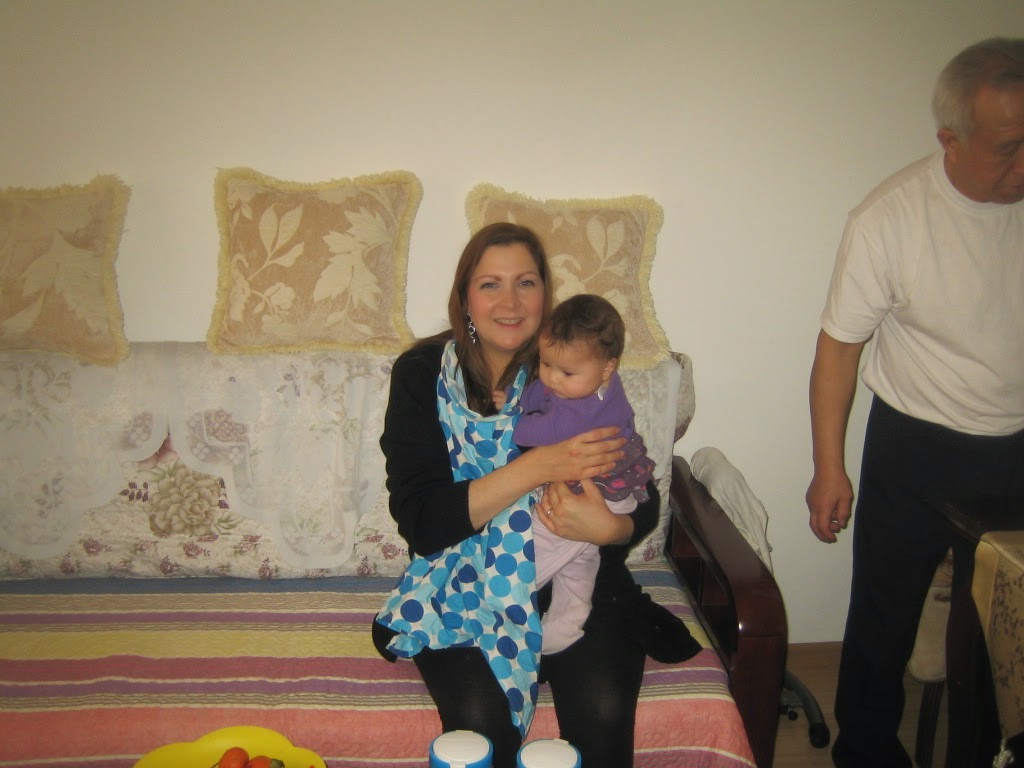 I believe this is a new sofa. Or new coverings for it. It was much cleaner than in their old place. 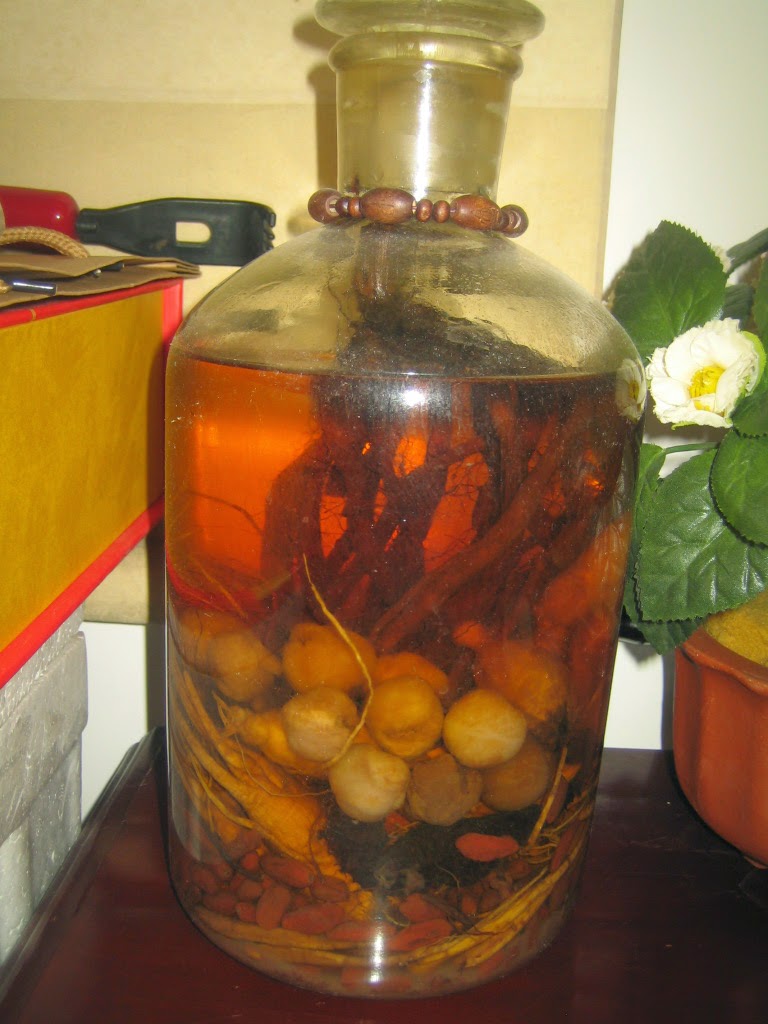 And now, feast your eyes on this! It's that special alcohol with ginseng and opium! I asked to give it a try. Jumu and her husband were happy to pour me a glass. You know I had to try it. As they poured me a glass, Jeremy explained that there was a seahorse somewhere in there. I kid you not. Still, I had to give it a whirl. Seahorse, a bunch of weird Chinese herbs and things, and supposedly opium.

How did it taste? It wasn't as bad as I was expecting. It was just a bit spicy in the way alcohol can be. How about the opium? Well, after a few sips of this stuff, I felt really pleasant and happy. I have no idea if it was caused by the opium or if it was just the alcohol (or the seahorse! aren't they happy?). Jumu kept offering me food to eat with it since Asians tend to eat food and drink at the same time. They find it odd that Westerners don't always eat while they are drinking.

Jumu also offered me cigarettes! Ha! I don't want to smoke, thank you, and even if I did, I would never ever EVER do that anywhere near my children. 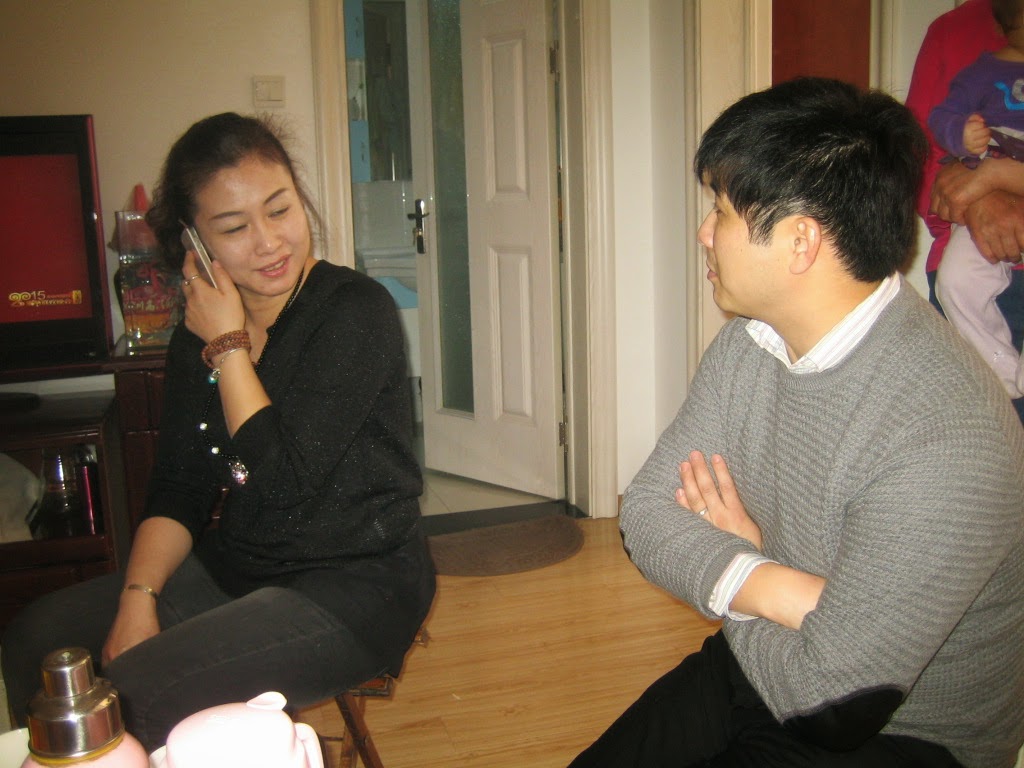 Jeremy chats with a cousin of his. 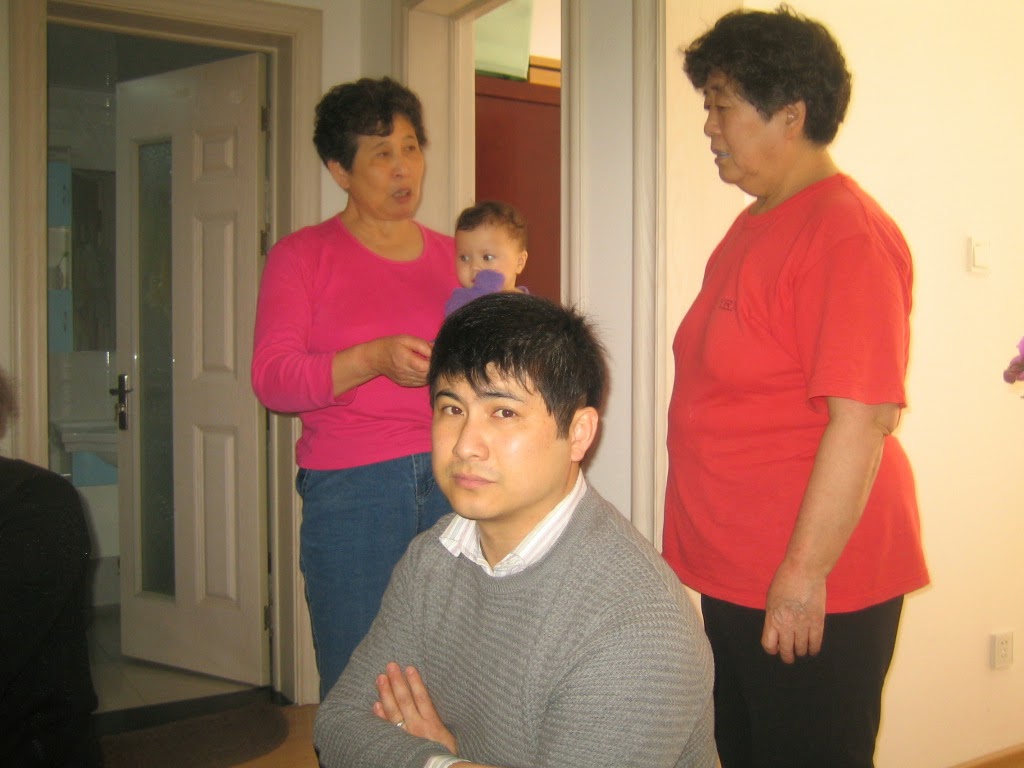 Now Jeremy gives me that I-know-you're-taking-photos-for-your-blog face. I think he's still upset about that haircut. 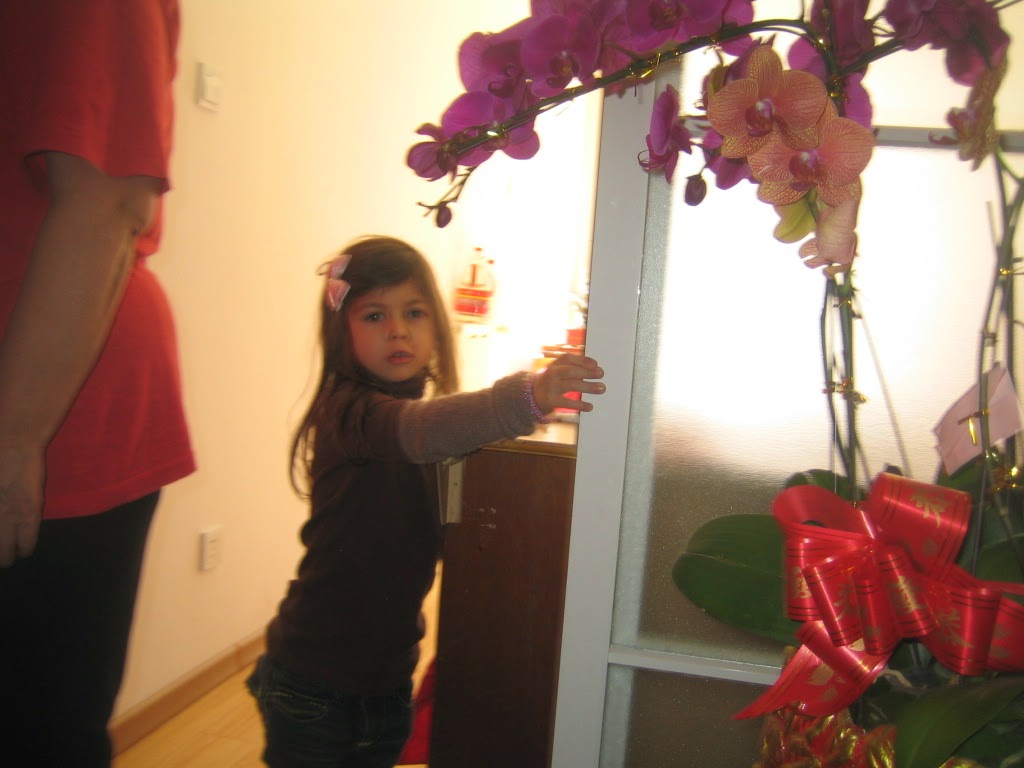 Raelynn plays with a sliding door to a room after ingesting more candies than we'd have liked. Everyone kept giving them to her. Sigh. 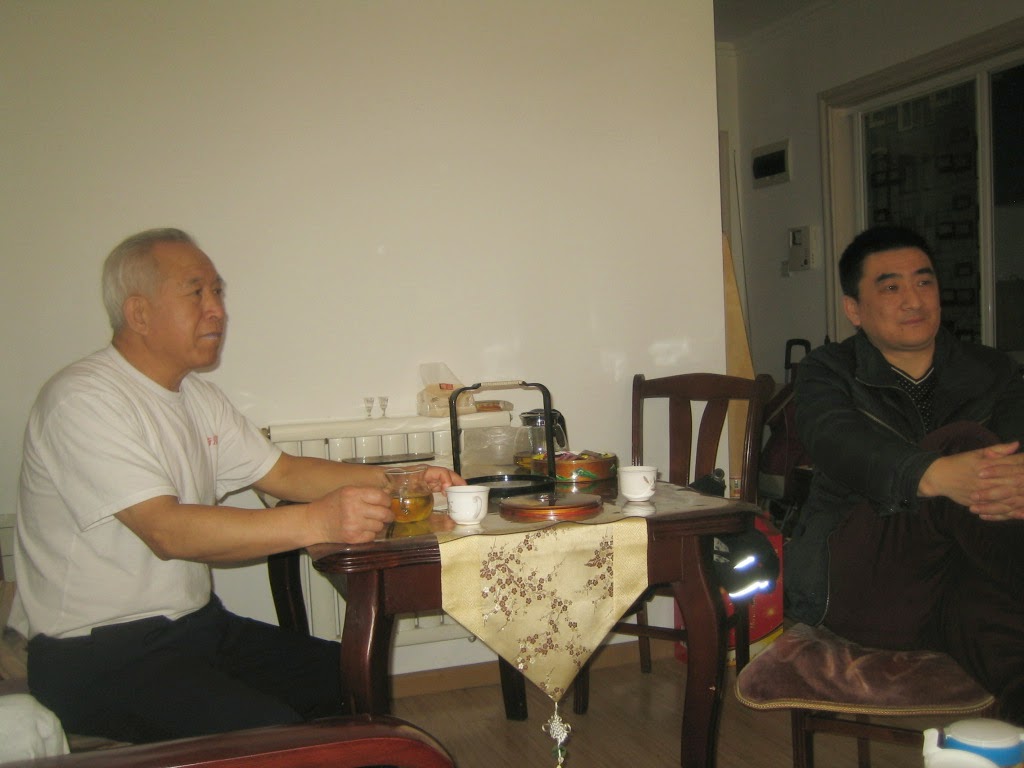 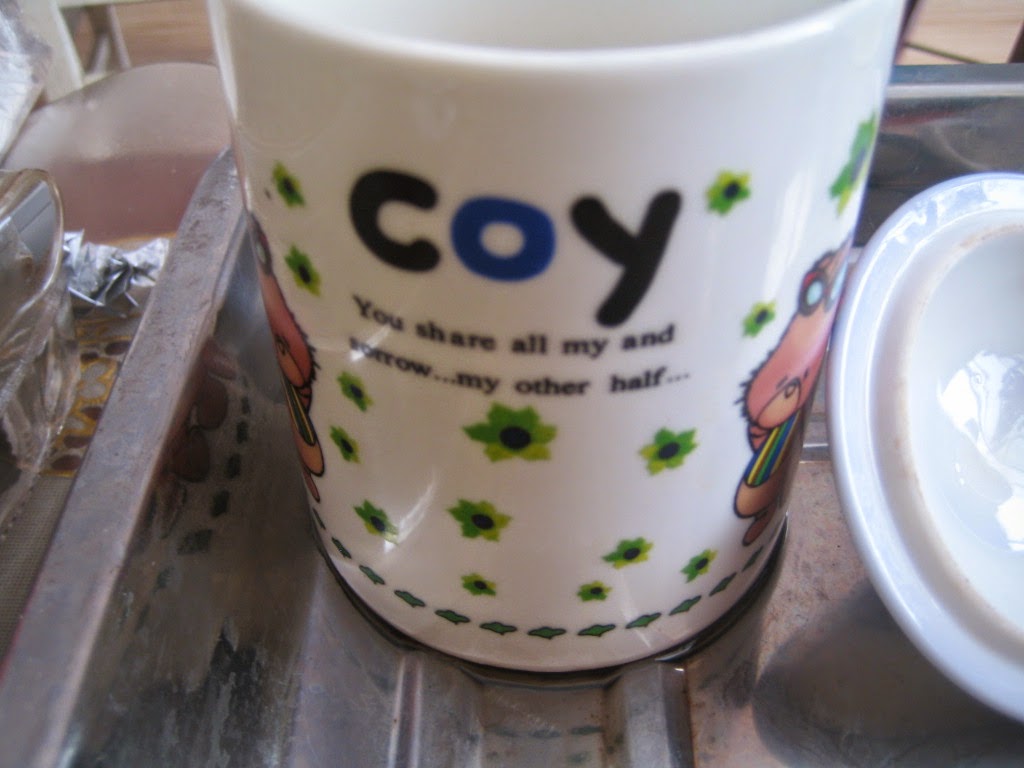 This mug made me laugh because of how completely far off from the real definition of "coy" it is. 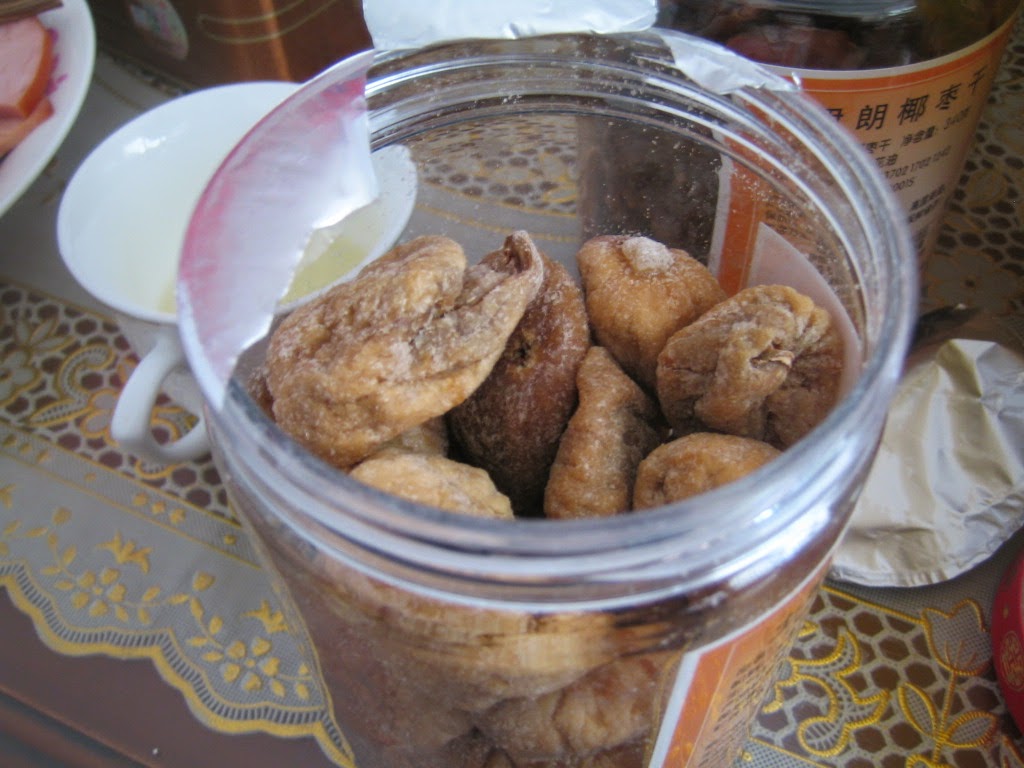 Shriveled testicles? That's what I thought when Jumu set this down in front of me. But it's something much more benign. It's dried figs! 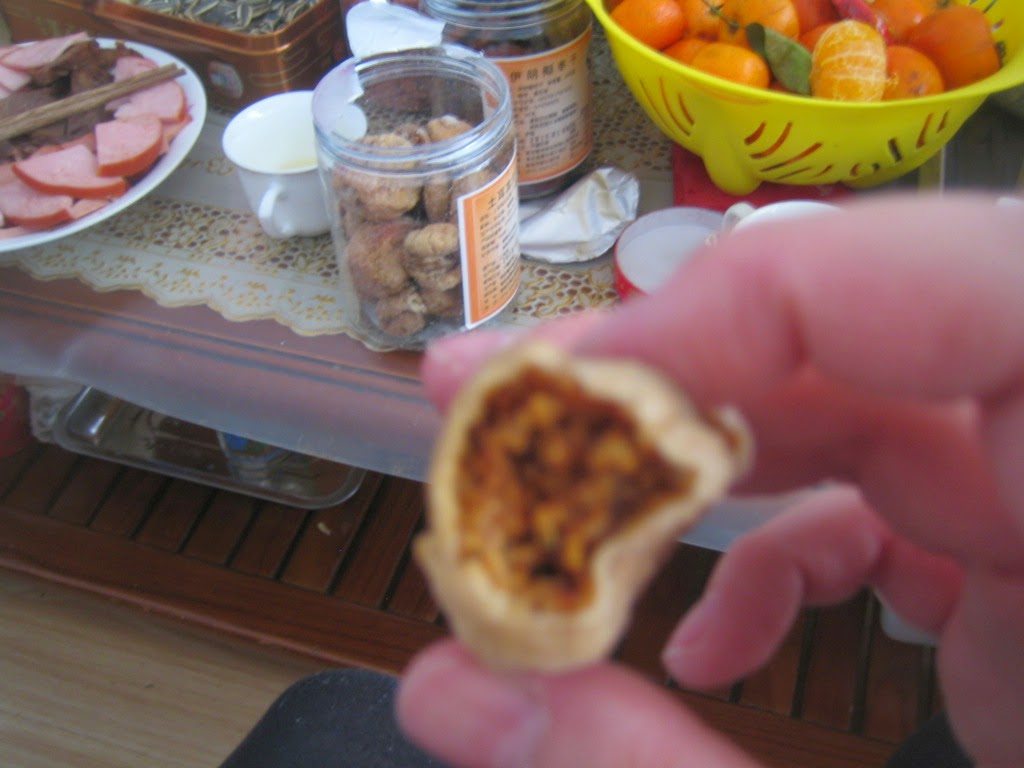 Hello, dried figs. I am so glad you're not testicles! 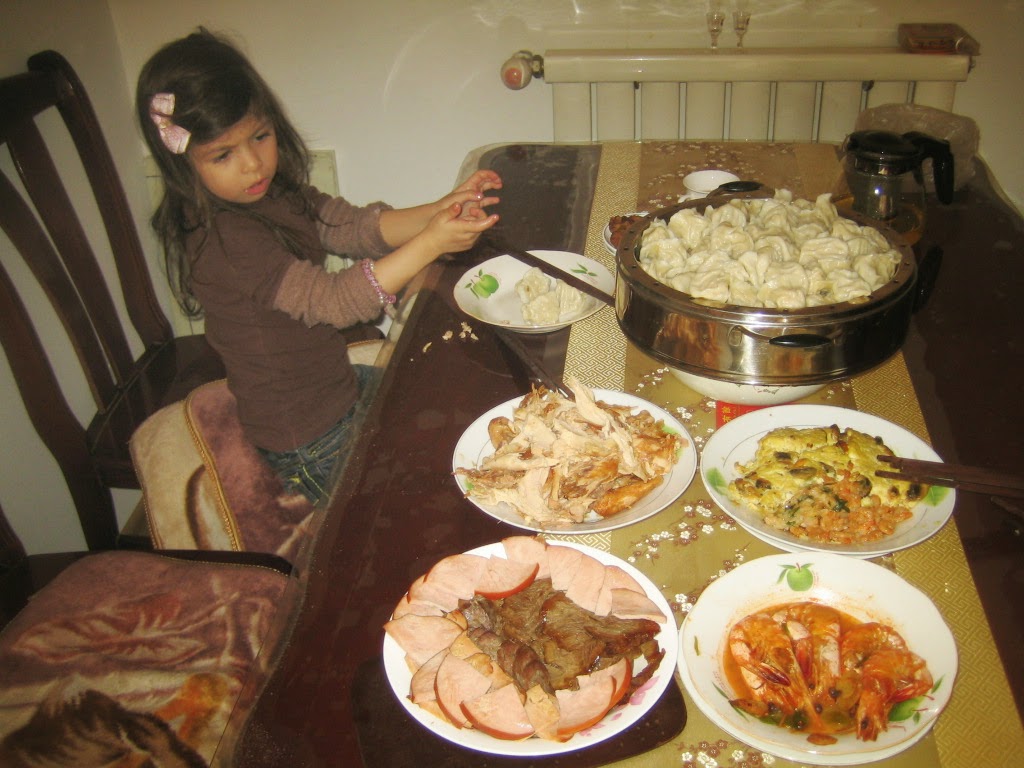 Raelynn's face here says it all. Remember the bad cook lady? Well, now Jumu has stolen the title of worst cook from her. The bad cook lady is in 2nd place, and MIL is now 3rd. Jumu insisted on feeding us. I had declined repeatedly, saying I wasn't hungry. And this is precisely WHY I kept declining. I had a feeling the food would be gross. I was right. Jeremy ate a few dumplings to be polite, as did I. And some of the chicken. I would not touch anything else. It's just all so nasty. You know it's inedible when MIL won't eat it. It seriously was the worst food I ever had. To top it off, crazy ol' Jumu put coins in some of the dumplings for good luck so she said to be careful eating them. She says this after I put dumplings on Raelynn's plate. Thank goodness she hadn't started eating before I cut them all open. None of them contained coins, thankfully. That's the most bizarre custom I've ever heard of here. Then again, this is Jumu we're talking about.

Finally, we get to leave and when we do, Jeremy takes us to KFC. I happily snarf down a sandwich and fries, and share a hot fudge sundae with Raelynn. We take MIL back with an extra sandwich to give FIL. But now we're being forced to go upstairs....noooooooooooooooooooooooooooooooo! I don't want to go there! Gah! Not again!

At least Jeremy had fed me KFC first or I would have been completely stabby. Now he was handing me a beer while MIL was trotting off to make gross food. But nothing could ever top the grossness Jumu served up, and for that I was grateful. 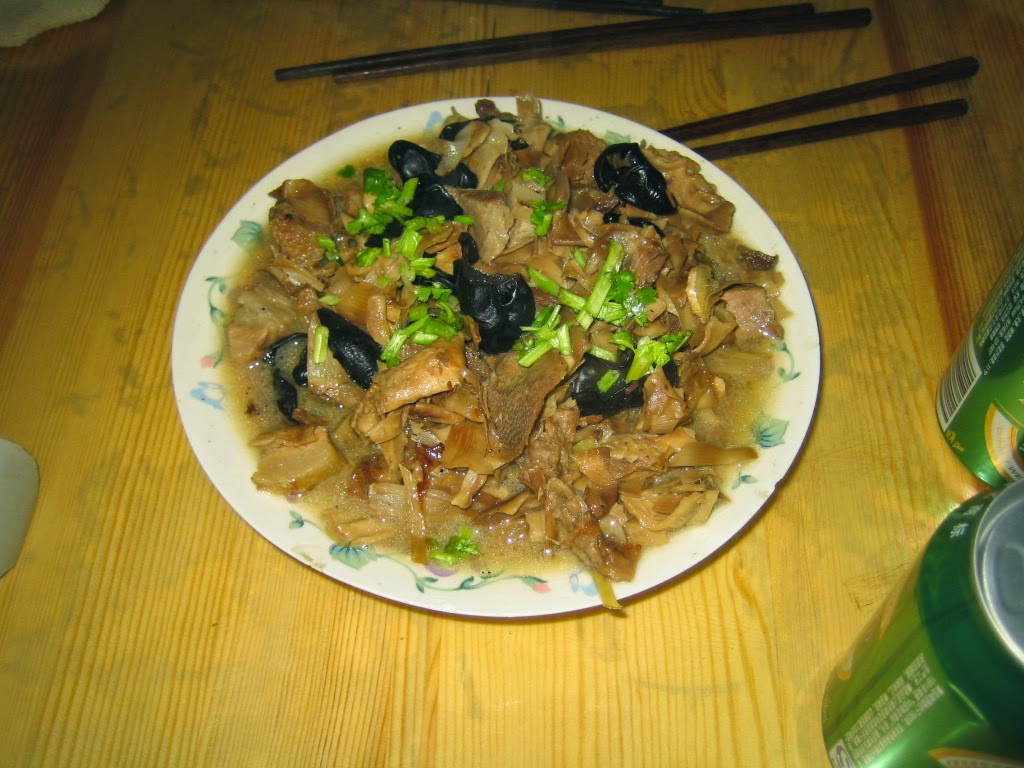 It's some meat dish with those rubbery black mushrooms and some other weird vegetable, perhaps bamboo? It wasn't too terrible but after KFC, I did not want this. 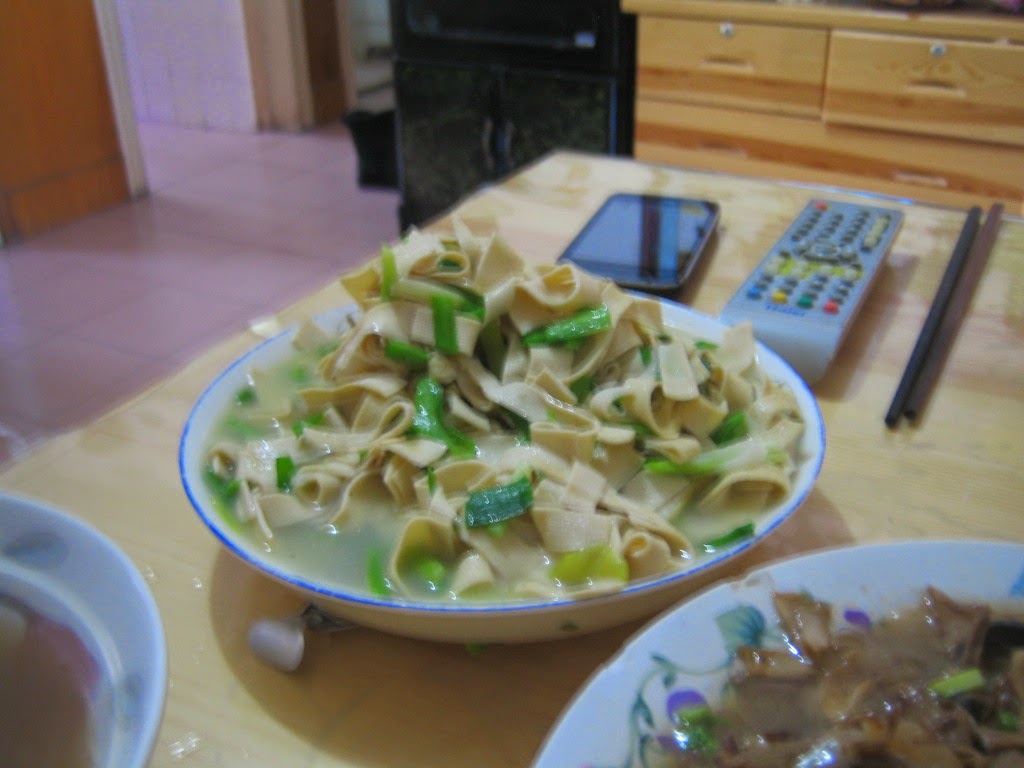 She served a xifan which she didn't offer me. She's learned I don't want to eat it. She's also served up tofu ribbons with bits of green vegetables in it...I think it was bok choy. This was so bland this time around. I hate when she makes something that looks good like this and tastes so blah. 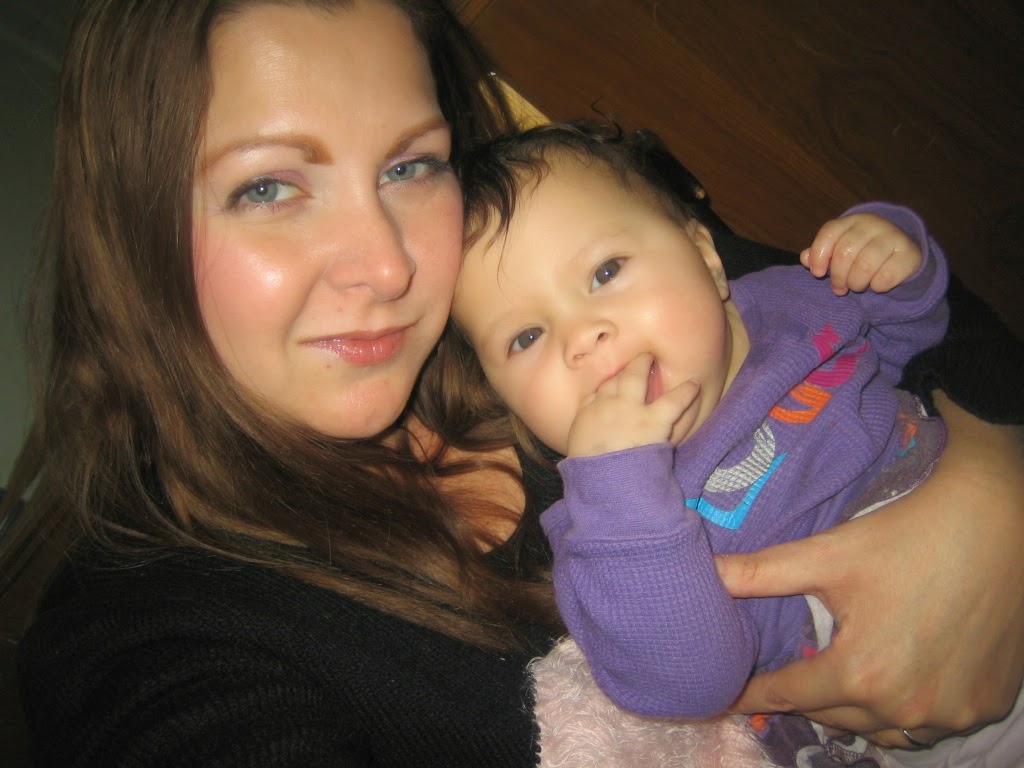 And then finally, we were able to go home. Seoul needed a nap, and so did Mommy.
Posted by JQ at 1:50 AM

Email ThisBlogThis!Share to TwitterShare to FacebookShare to Pinterest
Labels: Adorable Raelynn, Family, Holidays, Someone Made Me Eat This, Sweet Seoul