Last weekend, Jeremy had one of his weekly soccer games. I know it sounds nuts, but when he told me he'd be home around 2pm and he wasn't back yet, I felt like something was wrong. It's not far from our home and when he says he'll be done by a certain time, he always is. If he were to go somewhere afterward with his teammates, he would have called.

He comes in 30 minutes later, hobbling. He hurt himself again. Remember the last time? Except this time, he wasn't whiny. He was playing it off like it was fine. He had a business dinner to attend that night and he didn't want to gimp out on it, pardon the pun.

But this time, it seemed like he did much more than just sprain it. He hit his heel bone and detecting fractures there can be a bit more tricky. To be sure, an x-ray is needed. I tried my best to check him out, thinking of what my radiologist father would do. There was no swelling or bruising. He could rotate his ankle without pain. But if he tried to stand on the injured foot, he could not do it. I feared it was broken but told him that an x-ray would tell us for sure.

He went to the hospital alone, despite my pleadings to assist him. He didn't want me to be stuck in the unkempt hospital for an undetermined amount of time with Raelynn or Seoul. Lord knows that would have been a nightmare. So we waited at home for him to return.

After about 4 hours, he's back, with a plaster cast.

"So it is broken then?" I ask, feeling sorry for him.
"I don't know," he tells me.
"Um, but you have a cast on your foot. That generally means it's broken," I declare.
"No, they couldn't read the x-ray and then they wanted to charge me 300 yuan more to do some other scan and then..." and he keeps explaining but I'm stunned. I'm still stuck on the part where they couldn't read the x-ray. I say so and he agrees. "Well, that's why I got the plaster, because I need to stay off it anyway and if it is broken then I don't want to pay 300 more yuan AND get plaster on it. They're just trying to scam me by making me take more tests," he says. I completely agree.

In China, it's really very common for them to push useless tests, medicine or treatment onto you. I consider myself very lucky to have had Dr. Wang deliver both my children because she's one of the few competent doctors here. Too bad she isn't a radiologist. At the very beginning of my pregnancy with Seoul, I'd gone for a check-up on a day that Dr. Wang happened to have off. There was another doctor in there and we went ahead with the ultrasound. The ultrasound tech said the baby looked good and healthy. Here, they do not give you giant print-outs of your ultrasound like they do in the US. They print it very small on regular printer paper. So imagine our surprise when this doctor tells us, after briefly glancing at the tiny picture, that there's blood in my uterus and we need to buy this medicine for it.

She kept trying to bully us into it and scare us, but we're no fools. We didn't cave into her extortion and we did not ever, not even once, see her again after that throughout all our check-ups at the hospital. Thank goodness. I hope she was fired. We had briefly considered changing hospitals because of it but I wouldn't hear of having anyone but Dr. Wang deliver my 2nd child.

Anyway, back to Jeremy's foot. The most fascinating part of all of this was how they told him they couldn't read the x-ray. So I asked him to explain about that. And he said they told him it was too blurry. He'd need some other kind of a scan "to be sure." He was trying to tell me the name of the scan but he wasn't making sense. Sometimes, we get lost in translation. I'm thinking maybe he meant a CAT scan but whatever scan they wanted was definitely unnecessary. How is an x-ray too blurry? I've never heard of that before. Like ever. Perhaps this kind of bullshit works on the uneducated masses of China, but it doesn't work on my educated husband. Or his wife, the daughter of a radiologist.

So to avoid paying 300 rmb more to be told for sure if it was broken or not, he just got the cast. His thinking was that if it was broken, he's saved us 300 rmb because they'd just put a cast on it if it was. And if it's not, well, the cast will help him from putting pressure on it and causing him more pain.

The next day, we got some good news - it wasn't broken! The morons somehow figured out how to read the x-ray. I swear I'm not making this up. This kind of stuff could only happen in China. What infuriates me the most, I mean besides so-called medical professionals trying to fleece us for more money, is that they must do this to so many people who have no earthly idea what's what. And no one stops this. They just allow people who are supposed to care for the sick and injured to con them out of more money. What bastards.

Our story ends well - Jeremy got his cast off and his foot is feeling much better. 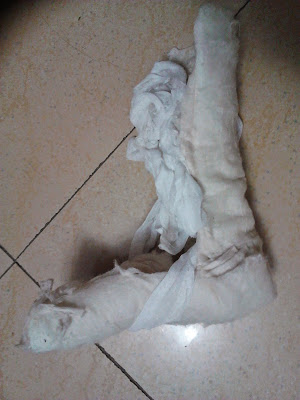 For Lord knows what reason, he brought home the cast after they cut his foot out of it. Maybe so I could blog about it.
Posted by JQ at 4:27 AM