Another Reason To Hate The People Upstairs

Back in May, I complained about our new upstairs neighbors. Maybe I should be happy that this unit is finally not being rented out to groups of noisy, filthy and rude migrant workers. That is a plus but this couple is maddeningly annoying. How so? Because since May, they have been randomly remodeling their apartment with no rhyme or reason. Or notice. Every time my husband has spoken to them about the noise, they promise they'll be finished by the next day.

But they never are. And this has been going on SINCE MAY. On Sunday, they were making an insane amount of construction-related noise and Jeremy went to take a look. They were putting hardwood flooring in. Which is funny because all the other noise they made truly sounded like they shattered ceramic tiles, rebuffed the floor, retiled it and then jackhammered that shit out of there. Anyway, they promised on Sunday that this was the end of it all and they would be done that day. Of course they weren't. They kept disturbing the peace through Wednesday.

Today though, it seemed quiet enough. My husband decided to work from home today. He's worried that as we approach the birth of the baby, if he's too far away, he can't help me. He'd been getting sent just outside the city on 2-hour drives lately and he requested due to our situation to stay close to home. So it was nice having him home even though we had to let him work. For lunch, Jeremy sweetly went and cooked for us. Raelynn was busy watching a new TV show she's gone crazy for on Nickelodeon, Peppa Pig. I have to admit it's kind of cute, plus, she's so hooked on it that it buys us 30 minutes of peace.

I took this opportunity to sneak away and check my email. Suddenly, the satellite went out, which isn't anything too unusual. It seems to happen more during this time of year than in the colder months. It's annoying but usually pops back up rather quickly. Raelynn begins screaming and crying for Peppa Pig so Jeremy goes to check out what's up with the TV. It's then that I notice that our WiFi has completely flatlined. And that's spooky because that NEVER happens.

Thinking it perhaps a fluke, I restart my computer. But it still has no connection. The WiFi is gone! Still cooking, Jeremy returns to the kitchen while I console Raelynn and try to explain to her that we have to call the internet people to help us. It takes a while but she finally chills out and I'm able to distract her with old Dora episodes on the iPad.

After lunch, Jeremy calls the internet company and after several back and forth phone calls, we finally get a service guy who comes right out to see what the problem is. We'd of course done all the usual things - restart everything, unplug and then replug the WiFi box - and were still not connected. The most troubling thing of all was that the WiFi box was blinking away like it usually does but we weren't able to connect to anything.

We began to suspect that the people upstairs might have something to do with it.

And wouldn't you know, they likely did? Though from the looks of it, the service guy felt it was probably accidental. This has happened to us 2 other times before but the other 2 times, someone deliberately sabotaged the line in the stairwell. This time, the service guy said it looked like someone snagged something on it and pulled it apart. With these idiots going up and down and up and down with all their remodeling tools, I'm not surprised this happened at all. Just annoyed.

Here's the piece the guy gave to Jeremy that came off our wiring. It was all mangled so he just cut it off and replaced everything. 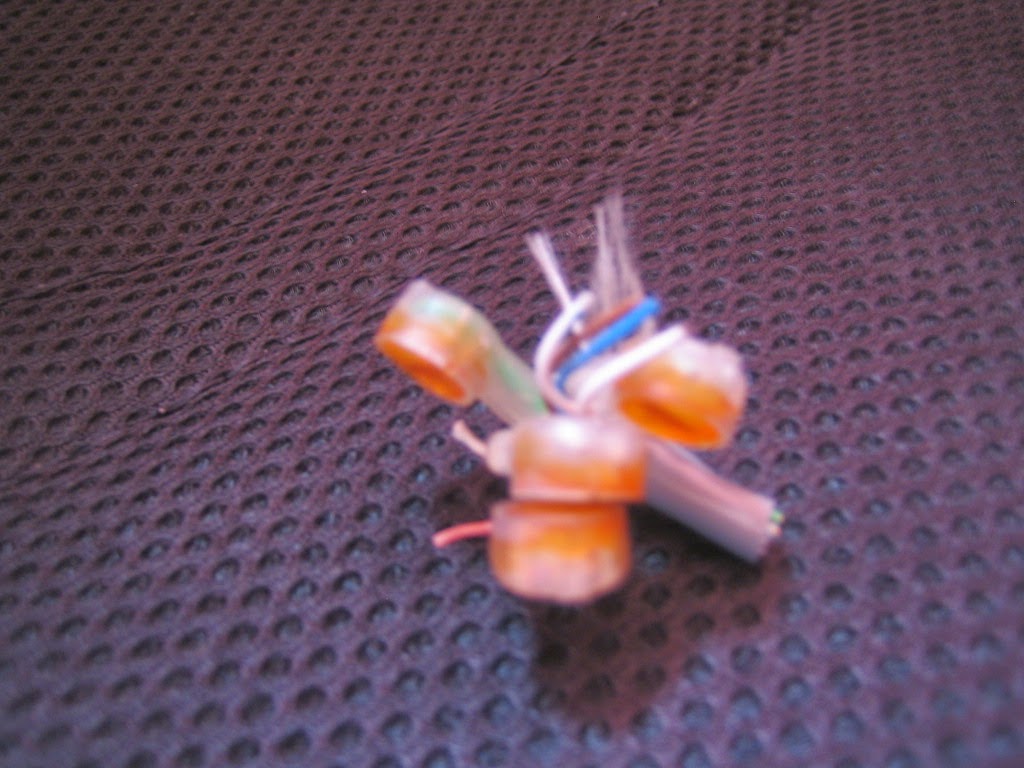 Thanks, idiots. At least we were spared a visit from the true village idiots today. MIL's sister was meeting her at their hillbilly house out at Laoshan Mountain. Good for her. She should be busy doing things for herself instead of meddling. I can't even imagine being forced to go out there right now though...they don't have A/C in that home. I was uncomfortable when we went and it was September. Imagine how sucky and hot it is there in July! Ugh!

In any event, we're hoping the buttheads upstairs will watch out with their shit in the stairs and not fuck up our cables again. Or begin another remodeling project. This pregnant lady can only take so much you know.
Posted by JQ at 6:01 AM

Email ThisBlogThis!Share to TwitterShare to FacebookShare to Pinterest
Labels: Chinese Home Repairs, Stupid People, Thanks For Nothing