Our First Outing As A Family Of 4

On Saturday, it marked one week that I'd been trapped in the house. Some of that was due to heavy rains from the outer bands of a typhoon, but by then, I'd truly had it.

Jeremy suggested we go to Taidong. I shuddered. Taidong is always crowded, plus it's the end of July which means it is disgustingly hot outside. And you see things there that are like the thing at the end of this post. He wanted to go to the discount baby store there and look for a baby chair. You might recall when MIL broke our Baby Bjorn Babysitter Balance chair, a very generous gift from a friend of ours that saved our sanity when Raelynn was small. While Seoul is a much easier-going baby, she still needs some sort of chair to chill in. We can't just have her lay on the couch or stash her in her crib. I didn't recall seeing any sort of baby chairs the last time we'd shopped there and I felt it might be a waste of time wading through the tourists all the while fighting off well-meaning-but-stupid-people who might want to touch the baby.

But my husband has a way of coaxing me out of my comfort zone. He reminded me that soon, we'd be making a trip to Guangzhou and we'd better get used to taking both children out with us. I couldn't argue with that logic. Or his offer to swing by the awesome little make-up store that sells Urban Decay and countless other fabulous things for super-cheap.

It was settled. But first, Mommy needed to fix herself up. Seoul had other plans. I smoothed on my foundation and just as I started blending it in, WAAAAAAAAAAAAAAAA! I hastily slather the rest of it all over and scoop her up. She falls right asleep again. I set her back down and grab my powder and brush. As I control the shine, WAAAAAAAAAAAAAAAA! Ok, kid, just chill. I pick her up again and just as quickly, she's asleep once more. This goes on with everything I apply to my face until finally, my husband emerges from taking an epic shit in the bathroom and I can hand off the baby to him.

Raelynn is the only one ready. For an hour, she taps her shiny silver princess shoes on the tiles, waiting for us to go.

As all this unfolds, I decide I will be much more relaxed hauling 2 kids around and trying not to punch any people that get too close if I drink a glass of wine. Only I don't so much drink it as chug it. But it does the trick. 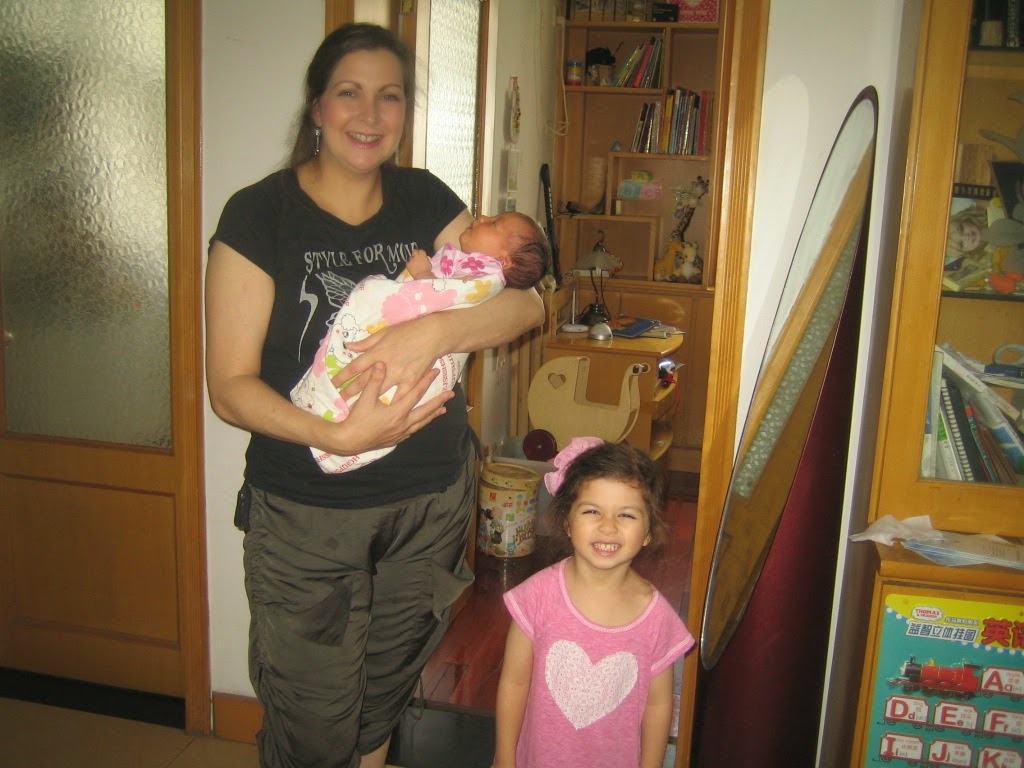 Not too shabby for sleep-deprived Mommy, eh? I'm also a bit surprised I look this slim just 10 days after having a baby. That was NOT the case after I had Raelynn.

Raelynn behaves while in Taidong, which made us quite happy. And just as I predicted, the discount baby store had no chairs. Raelynn continued to behave even in the make-up store. Which is basically a tiny little room that has no A/C. I'm disappointed as we walk up though. A couple owns it and the woman is so nice and helpful with finding me what I want. She wasn't there this time though...just her husband. He's nice too but he has no idea about make-up or anti-aging lotions. He remembers us though and welcomes us in. My husband translates what I'm looking for and the guy tries desperately to find the things I want. I finally find everything and realize Raelynn has been sitting quietly on the floor, waiting for us.

We wanted to buy her a big helium balloon for her good behavior but when we went out of the store and looked for one of the 3 balloon guys we'd seen while walking, they were nowhere to be found. We kept looking even all the way to the car. We'd parked by a Japanese restaurant and the last time we'd gone to Taidong, Jeremy promised me we could try it when I wasn't pregnant. He pointed at it and smiled. Want to take a try? Hells yes! Sushi for Mommy! We got it to go but Raelynn was losing her patience. Jeremy grabbed her an ice cream before we pulled out of the parking space. We drove around Taidong some more, desperately looking for the balloon guys. We surmised they must have floated away.

Raelynn saved her tantrum for when we got home, which sucked. But you know what surprised me? NO ONE tried to touch the baby! I heard a few people marvel over the "xiao bao bao" (small baby) but no one bothered us. Well, one nosy woman told us as we were walking that we should put a hat on the baby. No one asked you, lady! But hey, when Raelynn was a baby, everyone came from miles around to tell us stupid shit like that. And only 1 person looked like they were going to touch her and that was the lady we usually buy toys from in the discount baby store. I told her nicely to please not touch the baby and Jeremy quickly interjected  that the baby was sleeping. The woman, nice as she is, was cramming her mouth full of cucumber at the time. People here are so damn nice but so damn clueless.

The next day though, we were desperate for milk and other necessities in this household so after church, we braved a trip to the supermarket. First, we sat in traffic for what seemed like 100 years. Then, we sat in a line, inching our way into the underground parking garage. Raelynn was becoming impatient yet again so we were trying our darndest to hurry the fuck up. Once inside the store, we ran around as though we were on one of those sweepstakes shows where you get 10 minutes to grab everything you want and race to a finish line. Juice. Cereal. Milk. Bread. Into the cart it goes in record speed. We get to the prepared foods and as Jeremy waits for tudou bien (potato bread) I grab a Japanese chicken sandwich wrap near the sushi. As I'm reaching for a sandwich, some stupid lady tried to touch Seoul's little feet. I swiveled away quickly and shouted at her. What a total moron! Seoul was sound asleep too. Why people here think this kind of thing is acceptable is beyond me. Especially when the child is visibly sleeping.

While waiting in line to pay, the woman in front of us started to come up to take a gander and I scooted in close to Jeremy. She was much nicer though. She said she didn't mean to startle me and that she just wanted to take a look but I was on high-alert after my close encounter with that other woman. The people behind us in the line had a small boy who looked a little older than Raelynn. He kept coming around to look at us and I heard his mother telling him that it was okay to look but don't touch the baby. At least some people here have manners. All in all though, it seems like less people are reaching in rudely to touch the baby and more and more of them are giving us our space. We'll have to do some more research the next time we go out though of course!
Posted by JQ at 12:38 AM