While Seoul was napping, I managed to get a few moments in of cleaning before Raelynn came back from the park with her grandparents. I just kind of went around the house sporadically. It wasn't my intention...it's just that I seriously became distracted. I threw in a load of laundry and then attempted to get the dusting done. And then I would see something else and stop doing what I was doing until I effectively did little bits around our whole apartment.

One of those little things was to organize a shelf in Raelynn's room that had all her hair stuff on it. See, every morning when MIL picks her up, she puts Raelynn's hair into a ponytail. And then she puts 2 barrettes in to keep her hair from coming loose and getting into her face. But she picks the same barrettes EVERY day. Whether they match or not. Even though there are about 30 different barrettes she could choose. So I thought I'd tidy up the area and put all big bows and clips in one container; hair ties in another container; and barrettes in yet another container.

So as I was doing that, I could now see the rest of the shelf. Because as you know, MIL has to knock everything over and spill it and of course not clean it up. Once I put all the items in containers, I then discovered this: 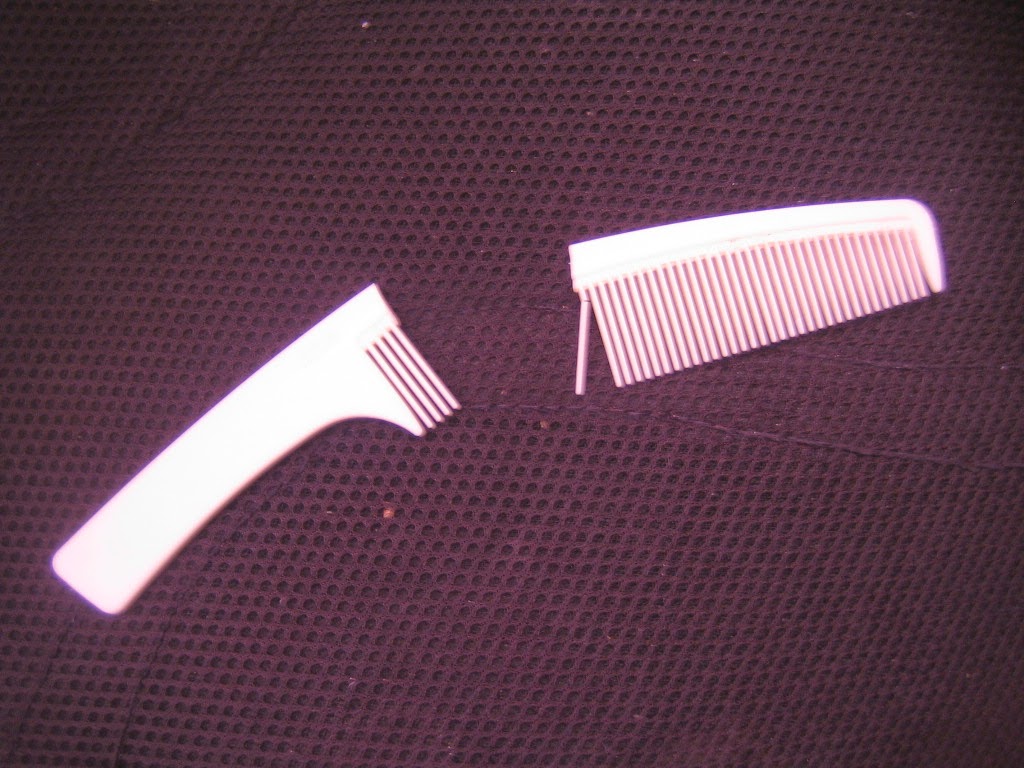 I knew MIL did it as soon as I saw it. I brought it to Jeremy though and asked him if he did it. Because if I outright blame her, he'll get defensive. No, he tells me, it wasn't him. He asked me if I thought Raelynn did it. While I'll concede that's a possibility as she's broken plenty herself, Raelynn NEVER puts a broken item back where it belongs. She leaves it out in the middle of everything. Or shoves it behind the couch. She has never once put a broken thing back in its' place. So I tell him this and I tell him I think his mom did it because she's the one who does Raelynn's hair in the mornings and instead of using the brush on her hair, MIL and her pea-brain always use the comb. Because of course!

Now, I know what you're thinking. But Jenn! It's just a fucking cheap-ass comb. Get over it! Oh sweethearts, please. I don't care about the comb. It's the principle of the whole thing. She breaks the comb and then puts it back on the shelf. Who could use this thing now? THROW IT OUT! Tell us you broke the comb. We have other combs. But no. She just puts it back on the shelf like nothing's the matter. She never says sorry when she breaks things either. Remember when she broke my 2 favorite mugs?!? And all the other shit she's broken. Like the Baby Bjorn chair! Not one sorry out of her. It's not in their culture which makes me angrier every time I hear that. You know why? Because I try very hard to incorporate some of the Chinese culture in my life. I'm not always successful but I do try because I want to make my husband happy and I want my daughters to embrace the Chinese part of their heritage as much as their American part.Why is it so hard for her to say "sorry" then? She could say it in Chinese and I'd understand just fine.

And honestly, if this comb was the only thing she had ever broken in our home, I wouldn't even give a shit. It's the culmination of broken things that have been put back broken over these last few years that just make me want to scream like a banshee before punching her in the throat as I tell her "OH COME ON!!!!! JUST FUCKING SAY YOU'RE SORRY! GAH!!!!" But my husband wouldn't be keen on that so all I can do is give her a dirty look and pray even harder that we can move home very soon. Oh and of course, use a different comb.
Posted by JQ at 11:19 PM

Email ThisBlogThis!Share to TwitterShare to FacebookShare to Pinterest
Labels: Cultural Clashes, Major Rant, MIL Problems, Oh MIL!, This Is Why We Can't Have Nice Things