You can check out previous S.M.M.E.T. (Someone Made Me Eat This) posts here.

Aha! I knew it wouldn't last. I'm just surprised she had such a long winning streak. And now I'm sad it's over actually. It was nice to sit down to dinner and truly want to eat what was served to me. Even last night's dinner was decent. Let's look at that first... 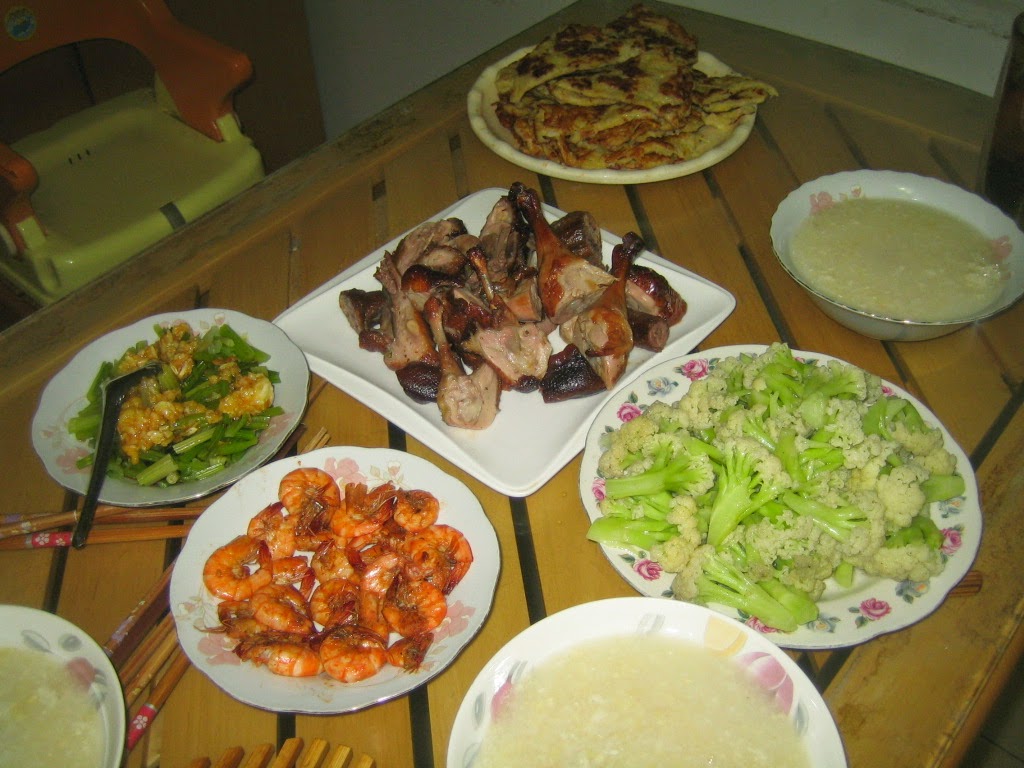 On the left, the dish with the green stuff is celery with tons of a garlic-soy sauce mixture on it. She served that recently. Not bad. Then in front of that, steamed shrimp, which is always good. In the center, a big plate of roasted duck. She didn't even pretend to make that (not like she did with the roasted chicken) as everyone here buys roasted duck. It's the equivalent of being in the US and stopping at the supermarket for a rotisserie chicken on the way home from work. In front of that, cauliflower (again). And off to the top of the photo, more tudou bien (potato bread) which I'm now getting sick of because she's served it so much lately. Oh, and check out the xifan. It's a white version with corn in it. Which would have been so much better had she 1) seasoned it and 2) made it less gloopy. It seriously reminded me of craft paste, but with a corn taste. Hey, that could be the tagline!

So maybe it wasn't the best meal ever. But it wasn't the worst. This next photo shows my nomination for one of MIL's worst meals ever. 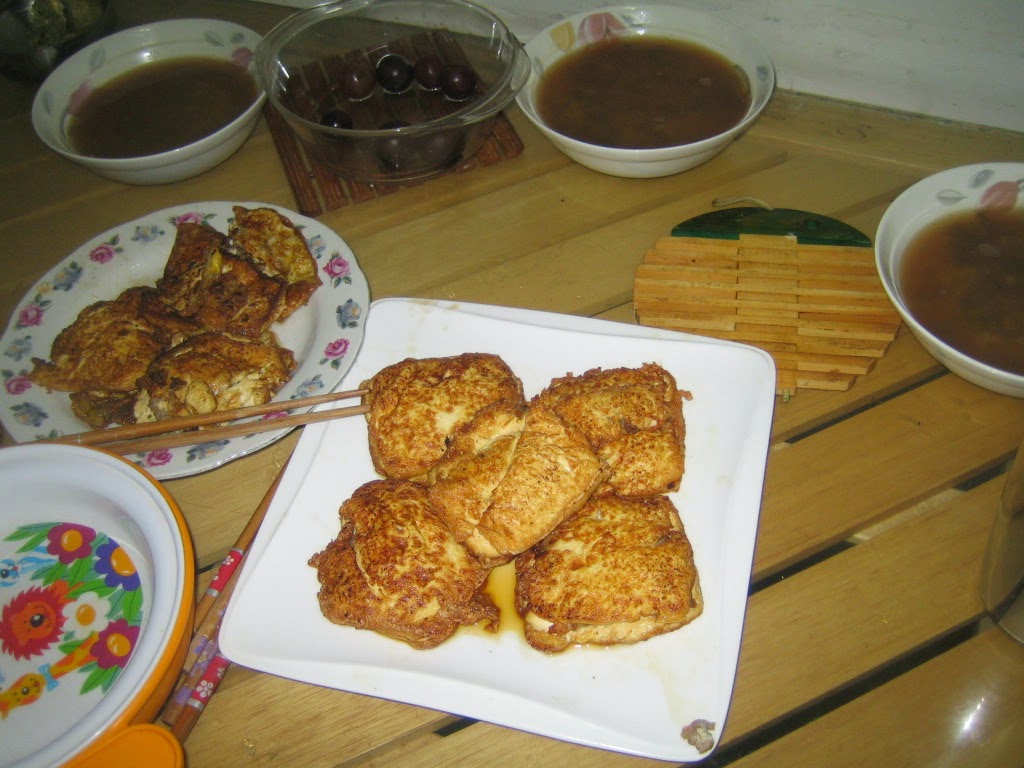 THIS was what she served us for dinner tonight. Ignore the glass dish with grapes in the back. Raelynn and I had been snacking on those a little while before dinner. THIS is our dinner. There are 3 bowls of the typical kind of xifan that she makes. And 2 plates full of this greasy, fried tofu patty. Just look at the oil on the plate! The tofu patty consists of 2 layers of silky tofu with a middle layer of some ground pork. This wasn't horrible but to be served just this and a bowl of shitty xifan pissed me off. Didn't Jeremy tell her to stop serving so much fried food? And where was the vegetable? She brought cucumbers, I later discovered. Why didn't she serve them?!? She also made a plate of dumplings but those were for Raelynn so I didn't take a photo of them. But they were gross too. She asked me to try one and I thought for one glimmering second that perhaps they would be good and I wouldn't starve after all but no. She put a filling in it that I cannot stand and I secretly wished we had a dog so I could throw it under the table to have snarfed up immediately. Then again, that would have been animal cruelty.

Even Jeremy was not very pleased with this meal. When he got home, I was already done with my xifan and forcing myself to eat 2 of those greasy messy things (and the one dumpling). I was starving though. To offset our hunger, he steamed us some potatoes and as I was attending to Seoul, I couldn't believe that horrid woman began eating the potatoes! You don't get any potatoes! Eat your oil-slathered crap and your fart-filled dumplings, you old bat! Gah!

Maybe I should market this as the MIL Diet. Food so gross you can't bear to eat it. Your extra weight from having that baby will just melt away! Of course, your stomach will start eating itself, so there's that, but hey, you'll look great once you can get past the sad shrieking sound that wails out from your abdominal area. Or, when she doesn't cook something properly (or doesn't clean the dishes with hot water), you can lose weight via diarrhea. That's fun too. Who's joining me on the MIL Diet? Anyone? No? Sigh. Thank God my mom is sending another package with food, glorious food. You rule, Mom. I love you!
Posted by JQ at 7:02 AM

Email ThisBlogThis!Share to TwitterShare to FacebookShare to Pinterest
Labels: MIL Problems, Someone Made Me Eat This, Yuck