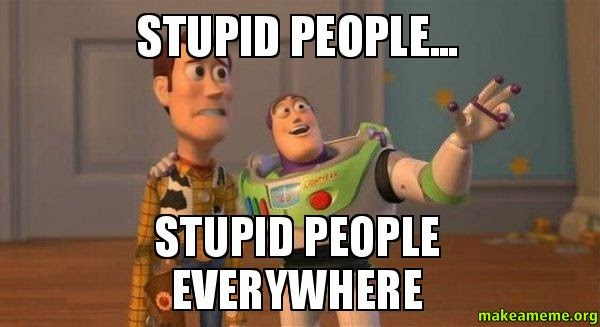 Dear China, we need to talk. There have been 3 separate incidents in as many days regarding some of your citizens aboard airplanes which leads me to believe that a severe outbreak of stupid is reaching epidemic levels in your country.

First, there was the flight from Bangkok, Thailand to Nanjing where 2 very selfish and moronic people engaged in an argument with a flight attendant and then threw steaming hot instant noodles onto said flight attendant. I believe I recall Xi Jinping imploring you folks to stop eating noodles whilst traveling. Which makes me insane for many reasons, but primarily because I cannot even fathom shelling out money for airfare and hotel in a new destination only to hide in my hotel room and eat some shitty convenience food instead of trying the food from another place. Something is wrong with you. Very wrong. Really.

Then, there was this selfish prick who wanted to get off the airplane faster so he opened the emergency exit, which in turn, deployed the emergency slide and caused the plane to be 2 hours late for take-off for its' next destination. Can I just ask you what kind of a moron do you have to be to not understand the words "EMERGENCY EXIT" printed in big red letters? It's in Chinese too for God's sake! It's just like the idiots who don't lock the doors to the airplane bathrooms on Chinese flights, even though it is in English AND Chinese. Hence, every single time I've had to use the bathroom when flying around China, I've walked in on someone using it because it says "VACANT" because the imbecile inside didn't lock it.

And today, I saw this one of some yokel who had never before been on a plane and of course did not listen to the safety instructions before take-off because he opened the emergency exit to get a breath of fresh air. At least this idiot opened the door over the wing so there was no emergency slide to deploy.

The level of stupid here is seriously astonishing. It deserves to be in the Guiness Book of World Records. "Most Stupid People Assembled in One Place at One Time." Congratulations, China. You're a winner!
Posted by JQ at 5:59 AM