Our Adventure At The Chimelong Safari Park 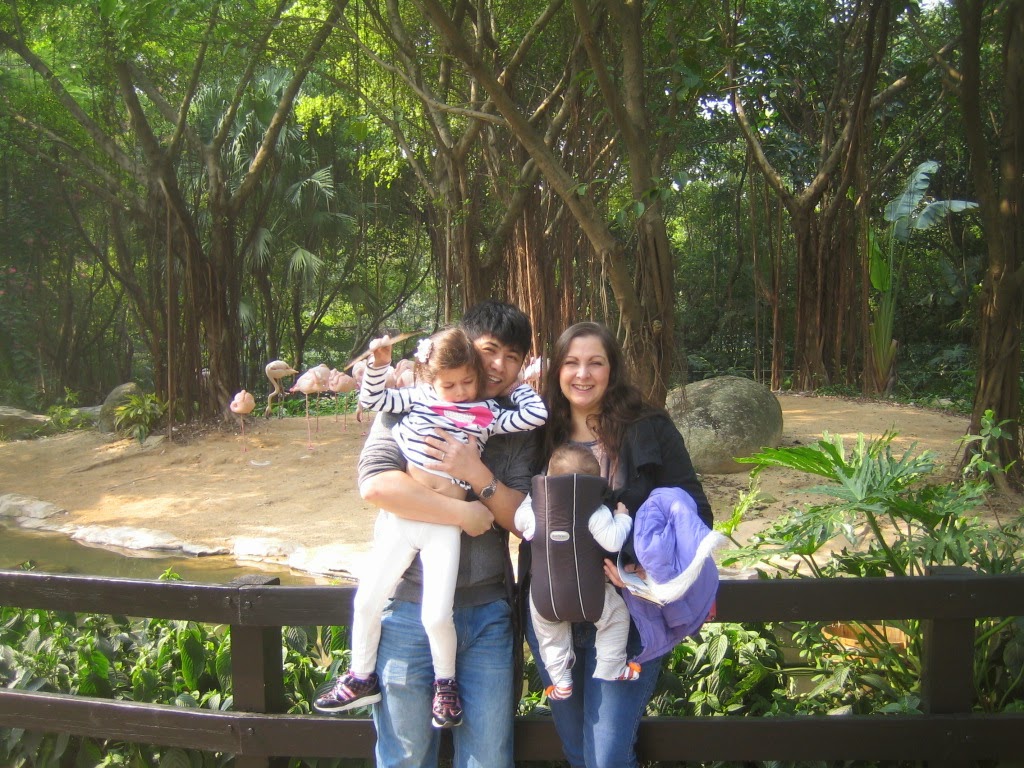 As I dive into the pile of writing I need to do for this blog, I thought I'd start with our trip to the zoo. Let me be clear - there is a stop called "Zoo" on one of the subway lines in Guangzhou. That is NOT this zoo. Jeremy says that that zoo is as horrid as the one here in Qingdao. We'd heard good things about the Chimelong Safari Park. We love animals and the last time we went to the zoo in Shanghai (which is also a pretty decent zoo), Raelynn was way too small to remember it. When we told her we were thinking about going to the zoo on this trip, she got so excited about seeing the animals that we knew we had to do this.

By the way, if you are traveling to Guangzhou and you plan to visit the Chimelong Safari Park, please heed this warning: watch out for the scammers at the subway exit! To get there, you take subway line 3 to the Hangxi-Chinglong station and get out at exit A. They will swarm at you like the locusts they are, promising you discounted tickets to the park and they will tell you that it takes 1 hour from that subway entrance to get to the park. My bullshit alarm went right off as Jeremy translated this. "Honey, remember, I'm from Miami. You can take the girl out of Miami but you can't take the Miami out of the girl." I knew something was up. Why in the world would they put a subway exit for this place and then make it an hour from the subway exit to the entrance of the park? Just go over the pedestrian overpass and you'll find a free shuttle bus that will take you to all the Chimelong things - the safari, the circus and all that jazz. We only had time for the safari so that's what we did. Also, those scammers want you to ride on one of their motorcycles (um, we have 2 kids...no!) or let them drive you in one of their rundown vans. I should also tell you this - it took perhaps 10 minutes from the subway entrance (once we pushed those lowlifes out of our way) to get to the safari entrance. A free shuttle bus had been right there, ready to roll. So if you get approached by those maggots, tell them to shove off and get a real job. I shudder to think how many tourists they rip off each day. Losers!

The tickets for adults on a weekday are 250 rmb each. That's not cheap, but I'll tell you, we felt it was truly worth the cost. There were very few people there, but perhaps that was because it was a weekday. We only encountered clusters of people in random places, like near the pandas. But that was it. I've always hated crowds. Imagine how much I hate them now that I'm in China where there are WAY more people than you can possibly comprehend. So when we find ourselves in a serene setting like this and there aren't hoards of people, I am absolutely thrilled. 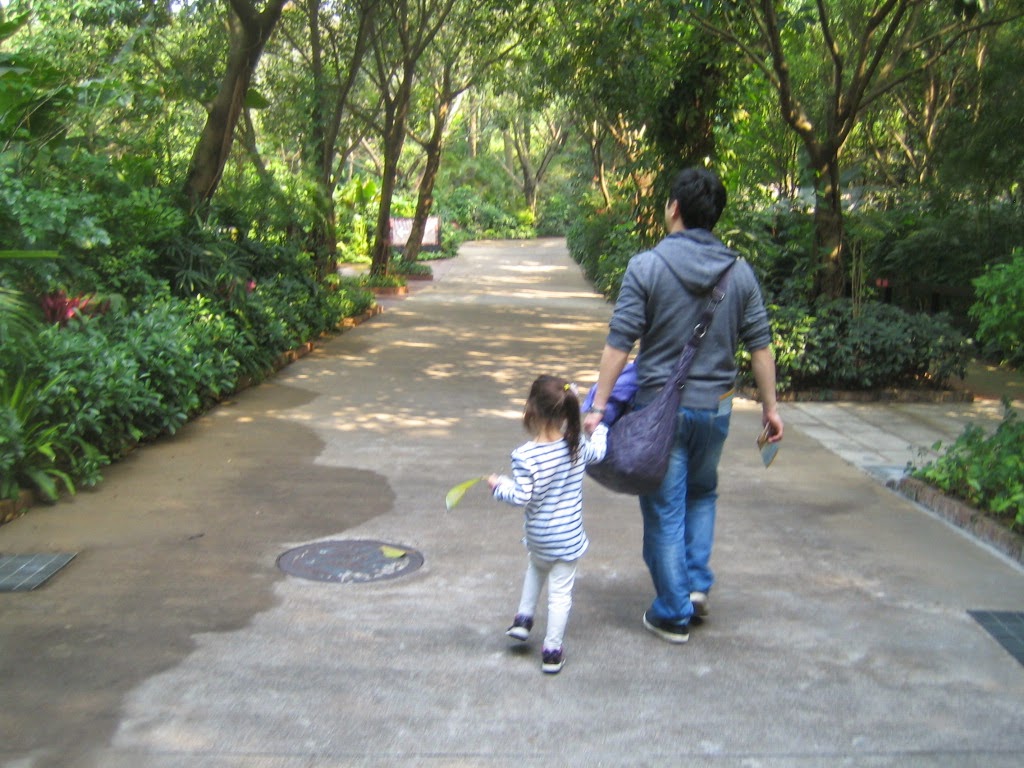 With the exception of a few of the exhibits, it felt like we had the zoo to ourselves the whole day. What a super feeling!

Another great thing is this - there is no charge for children under 1.2 meters. That meant that we paid 500 rmb total for the 4 of us to get in. Nice! Food was expensive though. We paid 15 rmb for a container of popcorn (which Raelynn spilled much of because she was being bratty and wanted to carry it herself) and 12 rmb for a sausage on a stick (we bought 2). 8 rmb for water. 60 rmb for a sub-par meal of chicken with vegetables and rice. You get the idea. But since they inspect your bags at the entrance for outside food, no one at this park can throw random food to the animals. And that is wonderful!

At the Qingdao zoo, people will throw candy and cigarette butts and all kinds of crap at the poor caged animals. At Chimelong Safari Park, they've smartly figured out that Chinese people in particular really enjoy trying to give food to the creatures they encounter so they have set up stations near just about every habitat where you can purchase the appropriate food to feed to the animals. Like the giraffes, for example. 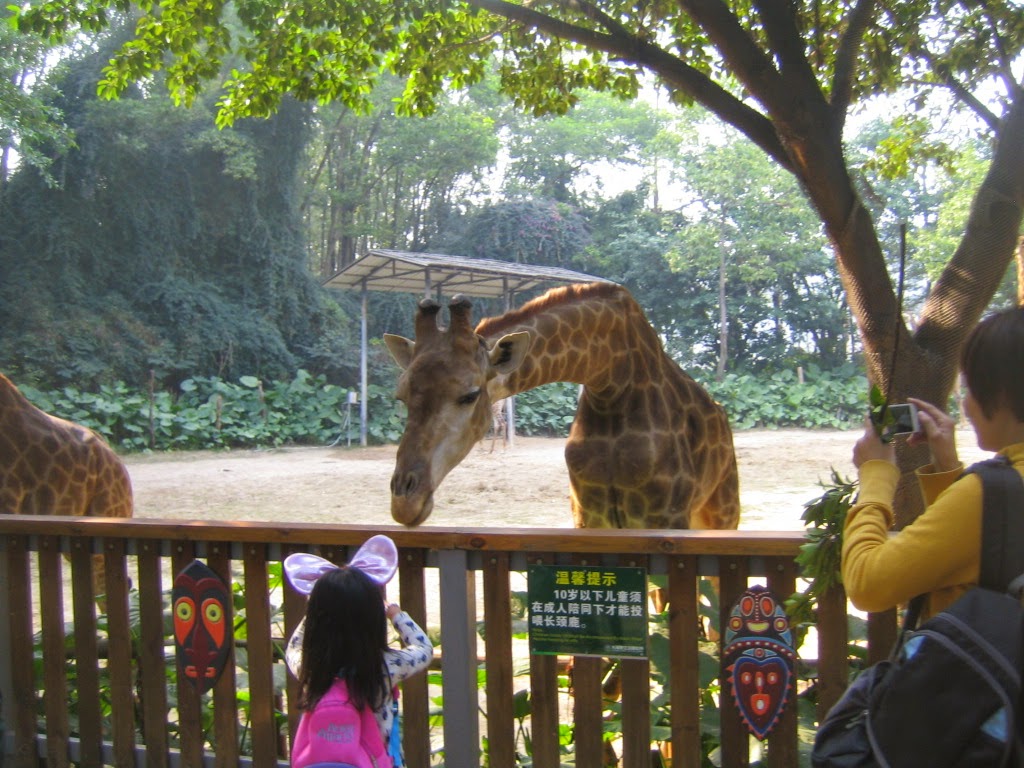 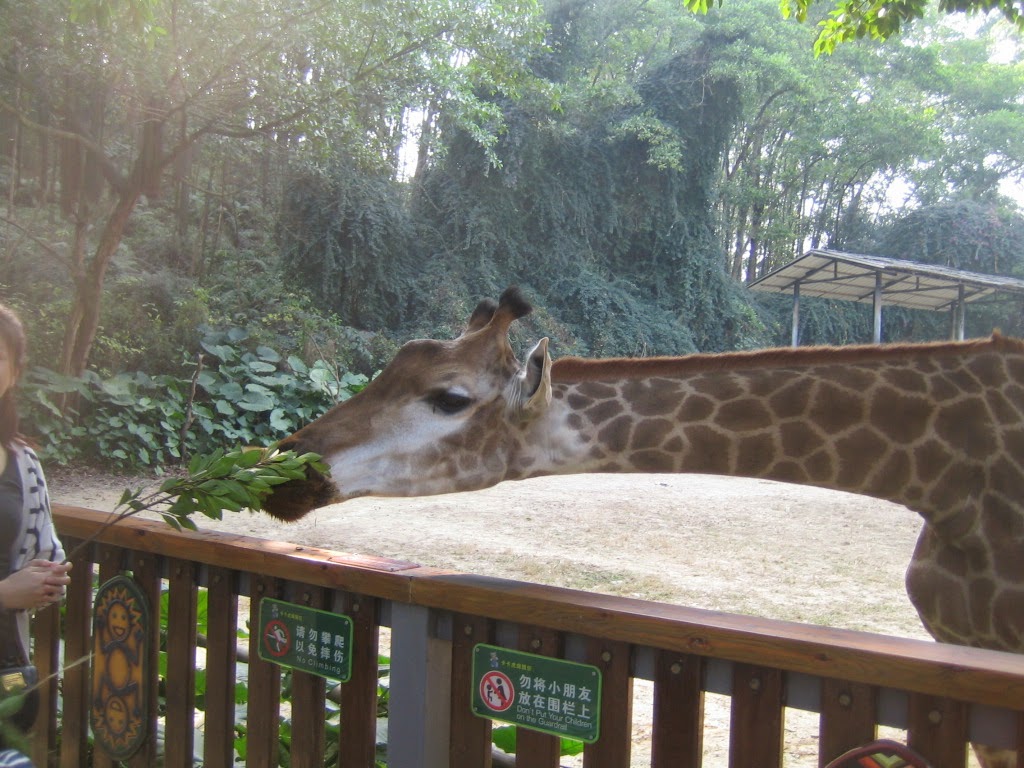 Jeremy became very childlike in his excitement and snagged a leafy branch off a nearby tree, not realizing that there were branches for sale. He held the offering up to a giraffe who gracefully bowed down to eat it. The giraffe slurped up the whole branch and then suddenly, made a disgusted face and threw up Jeremy's branch. It was so hilarious of a sight that neither one of us can stop laughing about it! Still! It's been a week! Anyway, right then, Jeremy realized that the leaves the giraffes were eating came from a kiosk right in front of the habitat. We lucked out when a small girl was too terrified to feed the giraffes and ran off, leaving a perfectly nice giraffe snack for us to hand out. Jeremy and Raelynn fed it to a different giraffe and this one didn't vomit, thankfully. 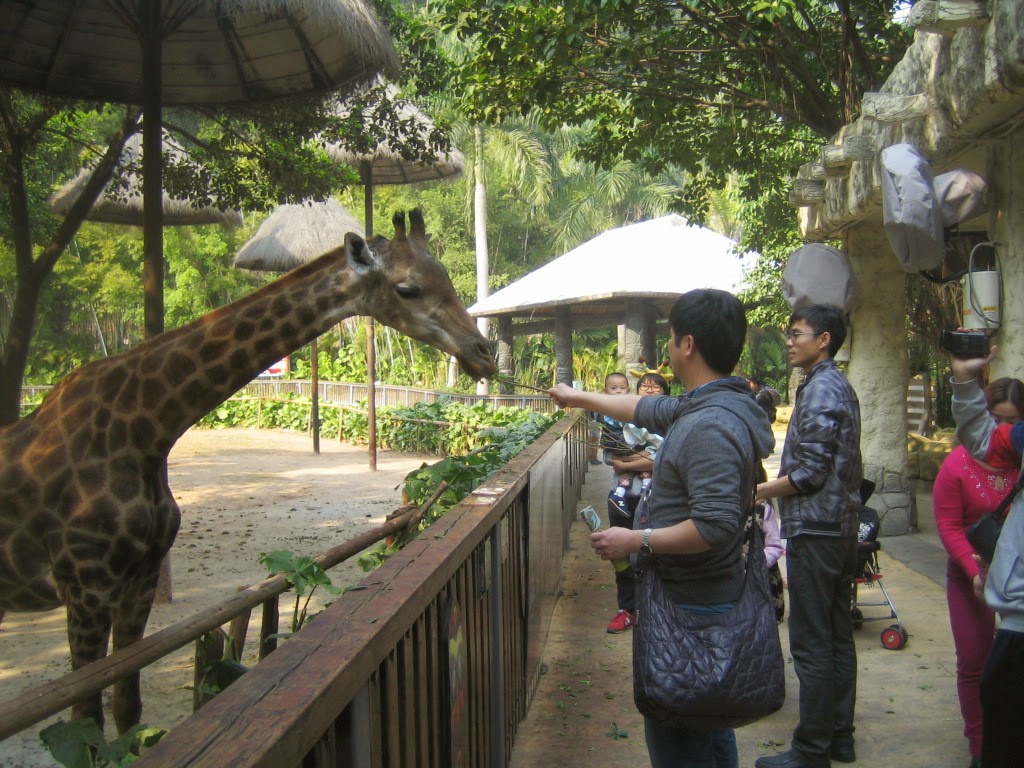 This is NOT the poor giraffe that barfed. 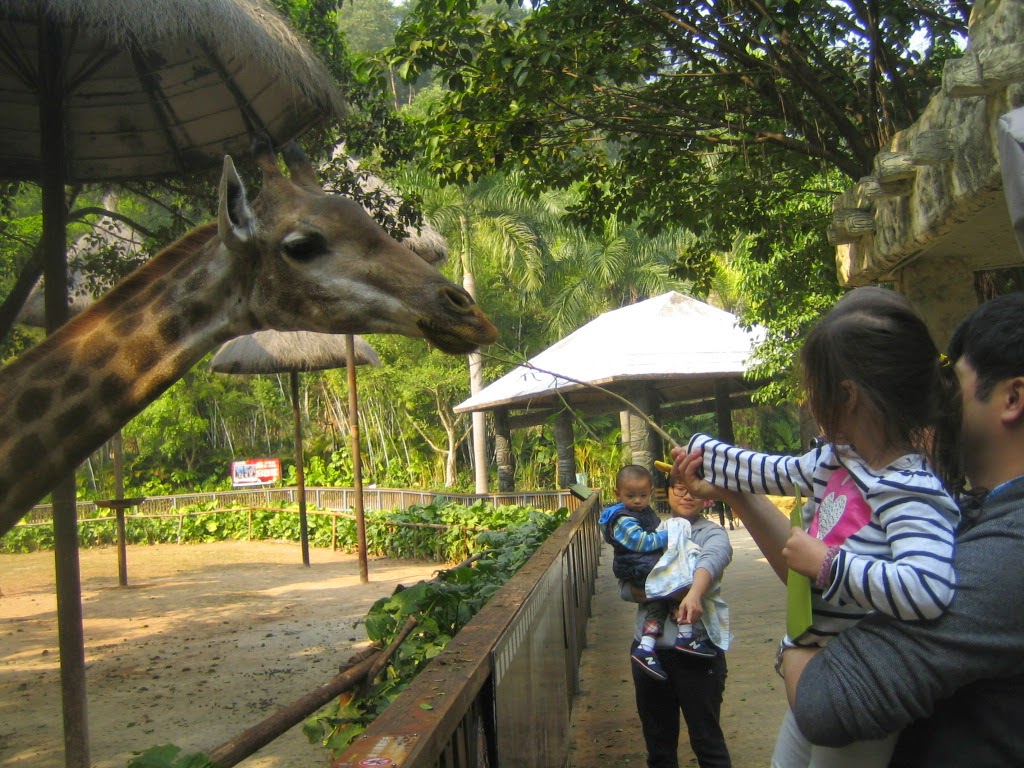 This zoo is also home to some very famous creatures - the only triplet giant pandas. There are baby pictures of these guys EVERYWHERE in the park. Adorable! But they aren't tiny little things anymore. Sure, they're small and cute, but they're getting bigger by the day. The park made a big deal about visiting the triplets, saying you needed a special ticket (which is free with your entrance ticket) to see the triplet pandas. You can also scan a bar code with your WeChat app to make an appointment. We got ours for 2pm. But when we got there, the employee guarding the entrance didn't even care to see our WeChat confirmation - she just waved us on through. We figure they probably keep tabs on how many people are back in the exhibit and keep a limited number of people going through at a time so the area isn't swarmed. In addition to the rare triplet pandas, they have a lot of other pandas. I love pandas so this was such a treat. Remember, Jeremy took us on a mini-honeymoon to Shanghai when I was pregnant with Raelynn and one of the reasons he took me there was so he could take me to see pandas. 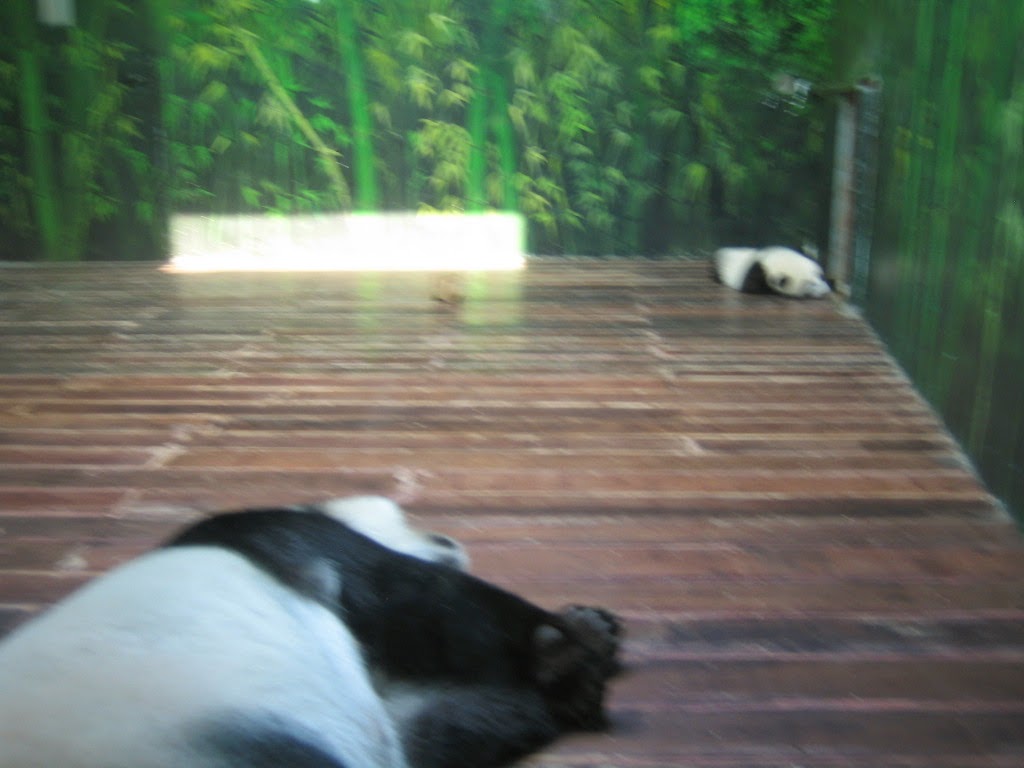 Mommy panda and one of the triplets. 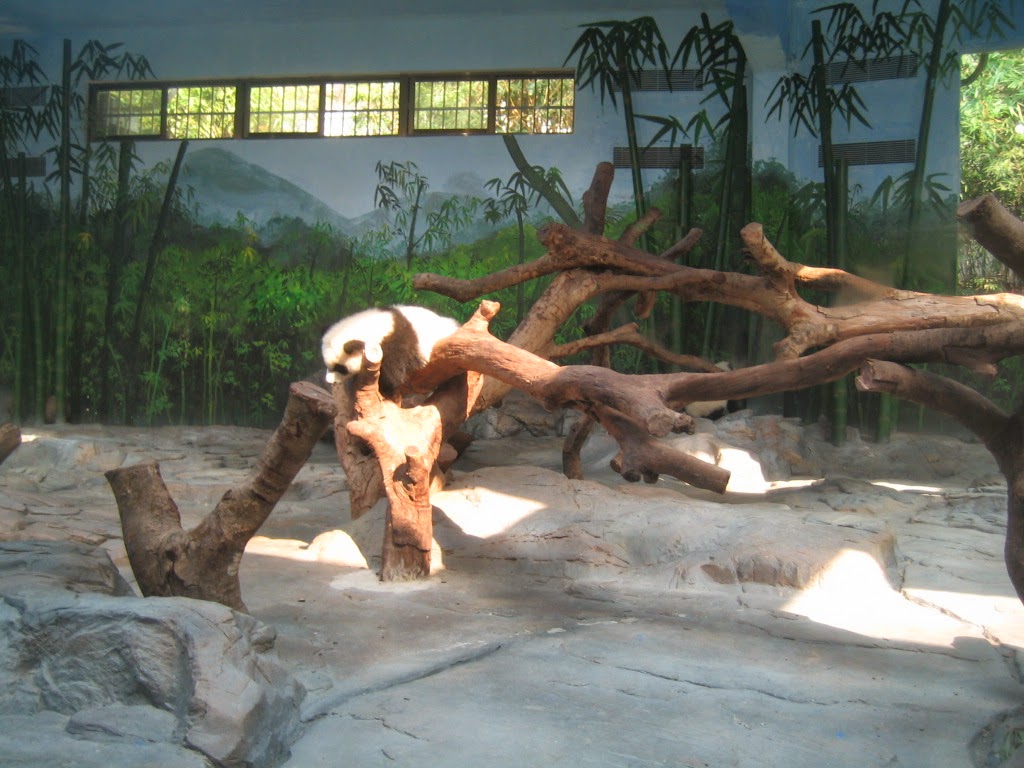 The other 2 triplets. The 2nd one is near impossible to see in this photo. 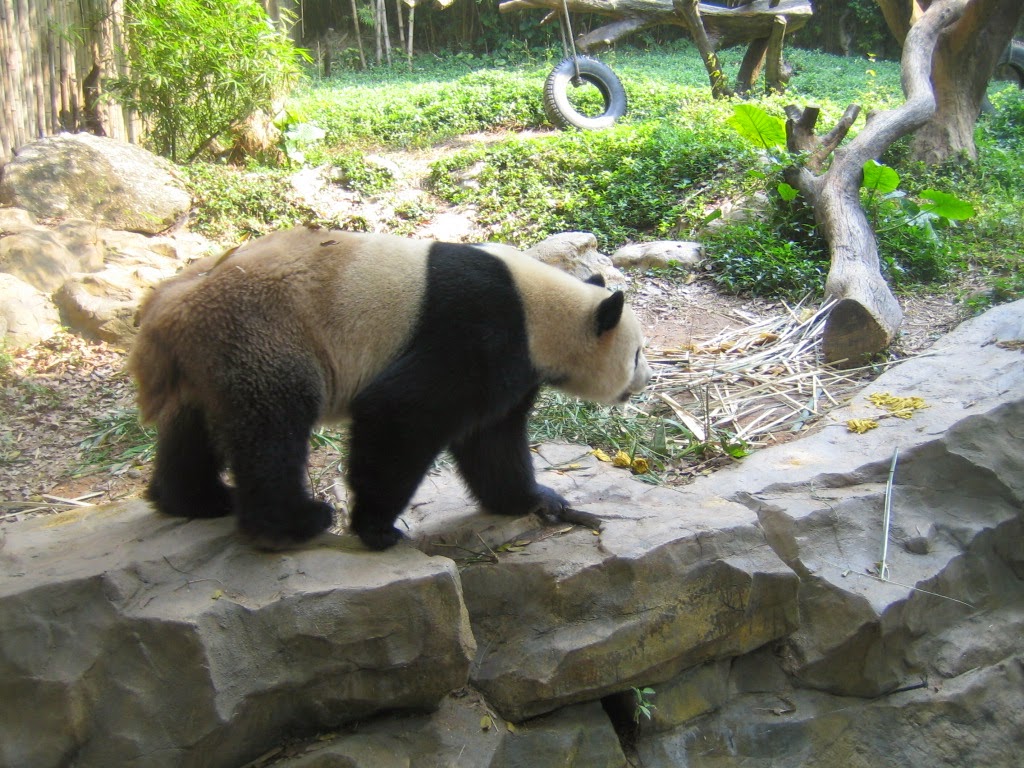 They also have quite a few koalas. I remember back when Miami Zoo was the Metro Zoo and they'd gotten a koala. My dad and I couldn't wait to see it. We drove all the way there to see it and all it did was sleep. That's when I learned koalas sleep about 21 hours a day. And many of these koalas were fast asleep. But there were several that were awake, happily munching their eucalyptus leaves. Jeremy kept yelling, "Lazy bones!" at the sleeping ones. They blissfully ignored him. 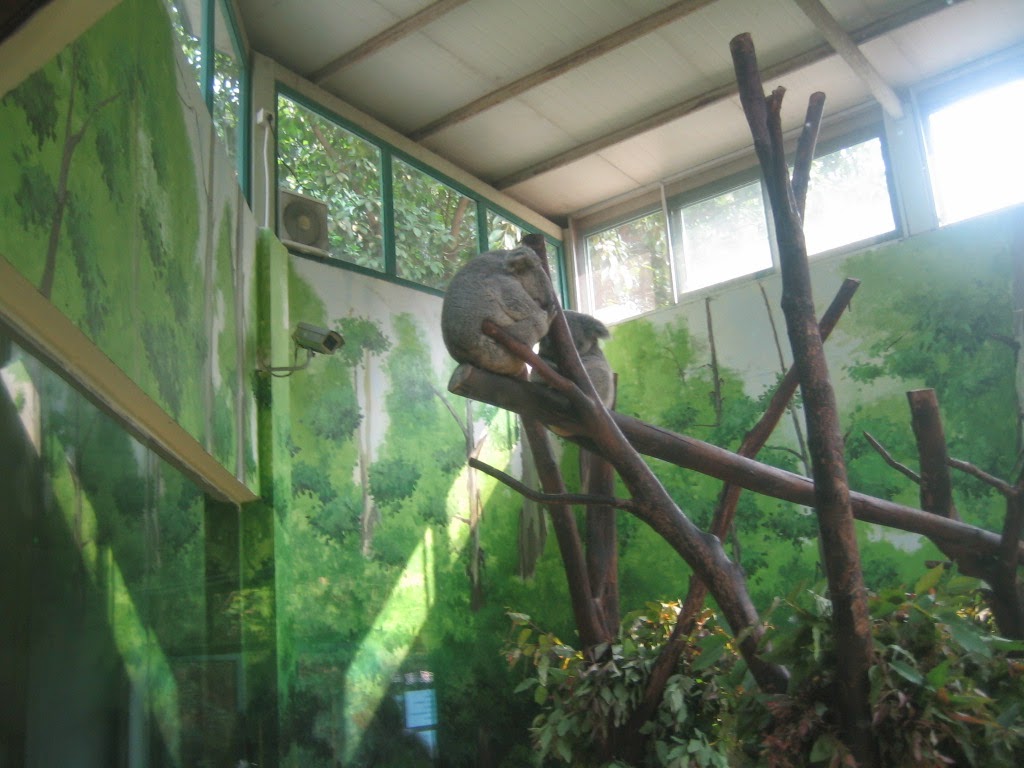 One really neat thing we saw was an elephant taking a swim and enjoying the water. I thought that was pretty cool. 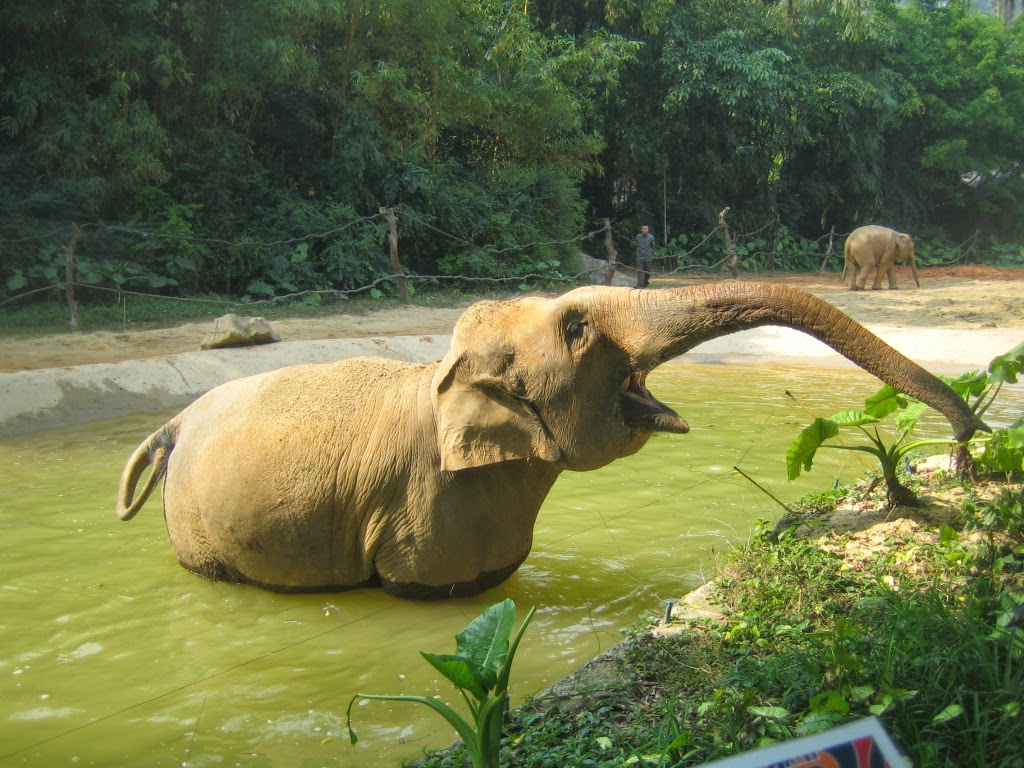 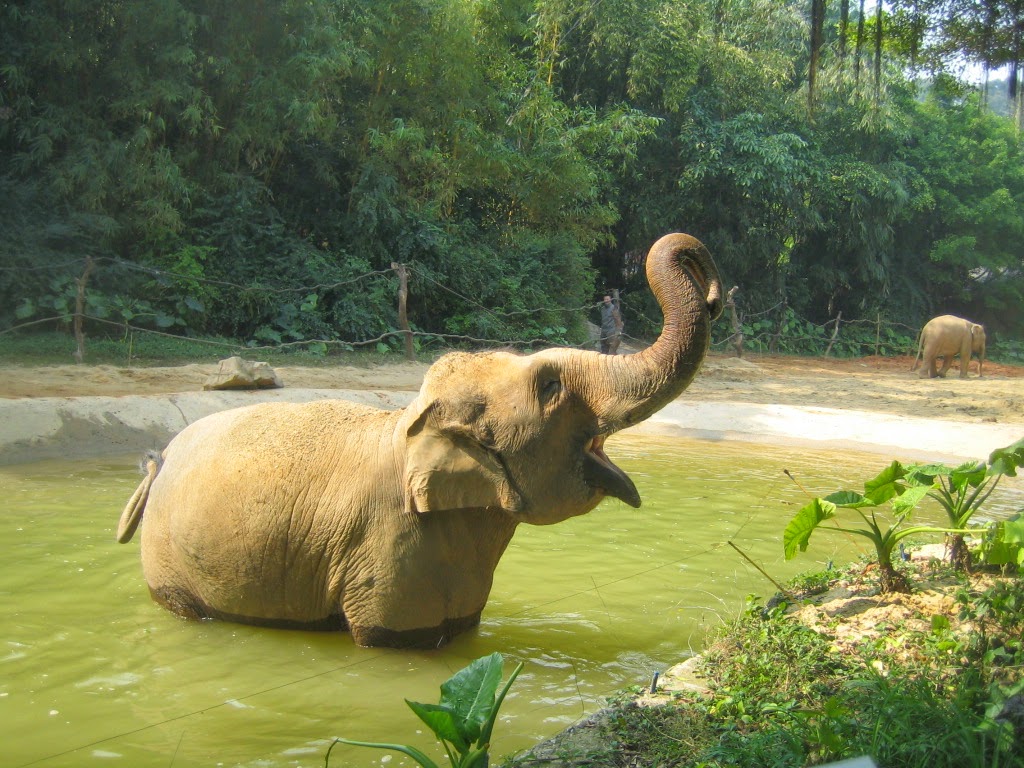 Jeremy was fascinated with the meerkats. He'd never even heard of them before. Look closely and see if you can spot them! 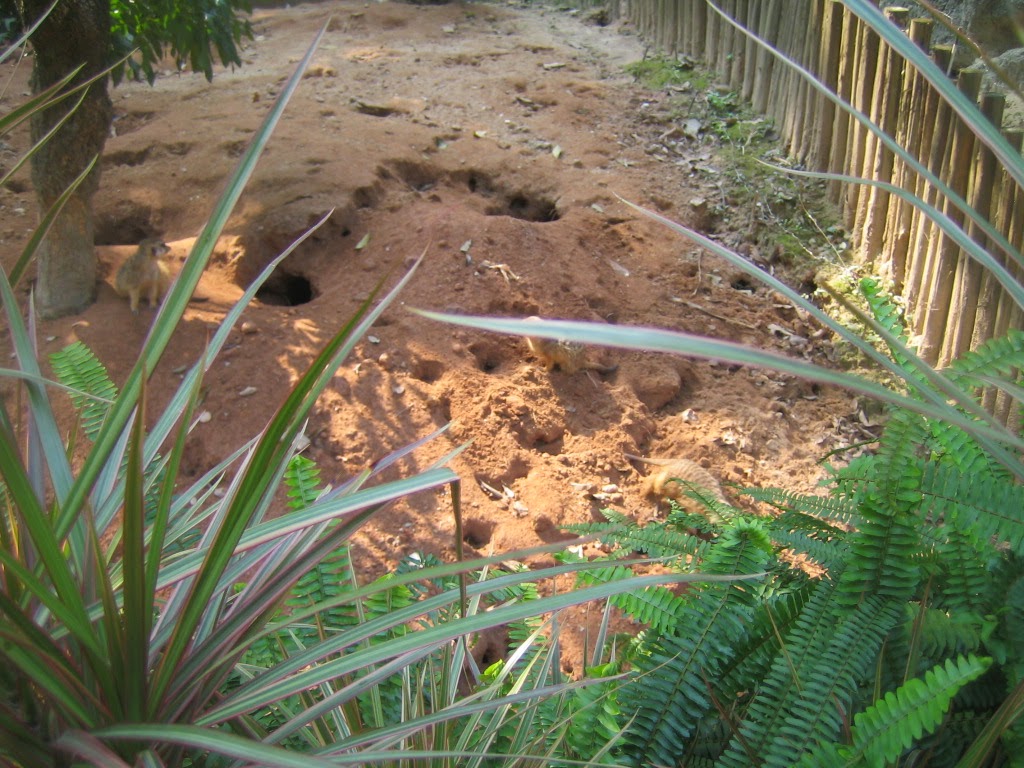 We all enjoyed the tigers too. Tigers are such beautiful creatures! 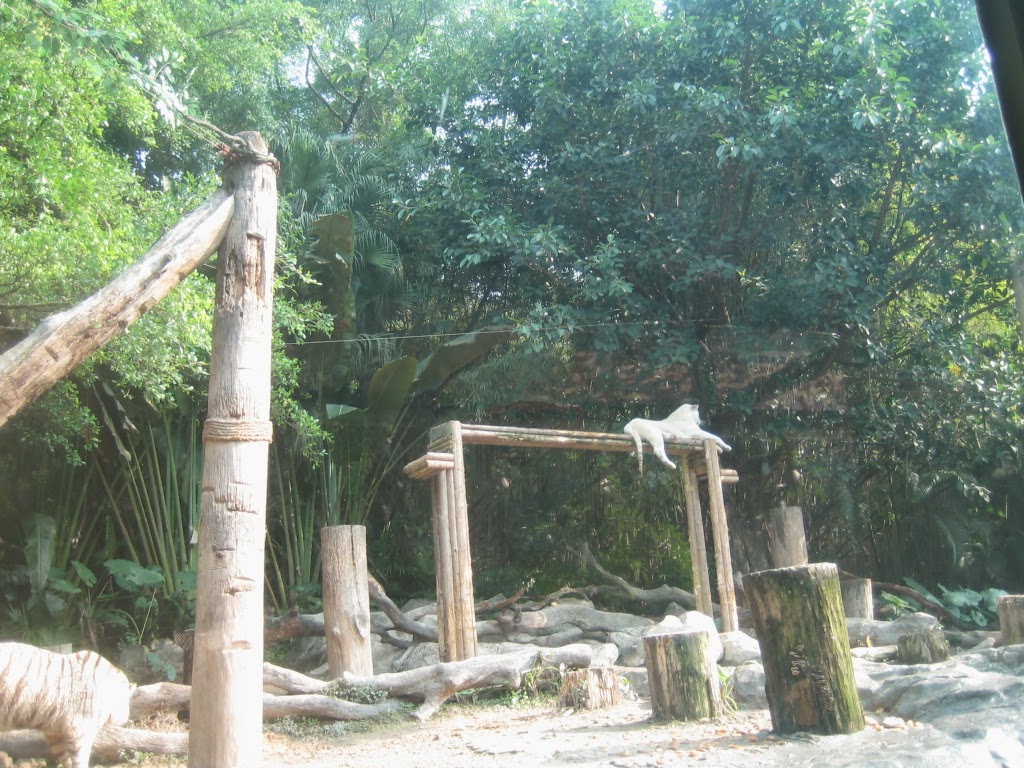 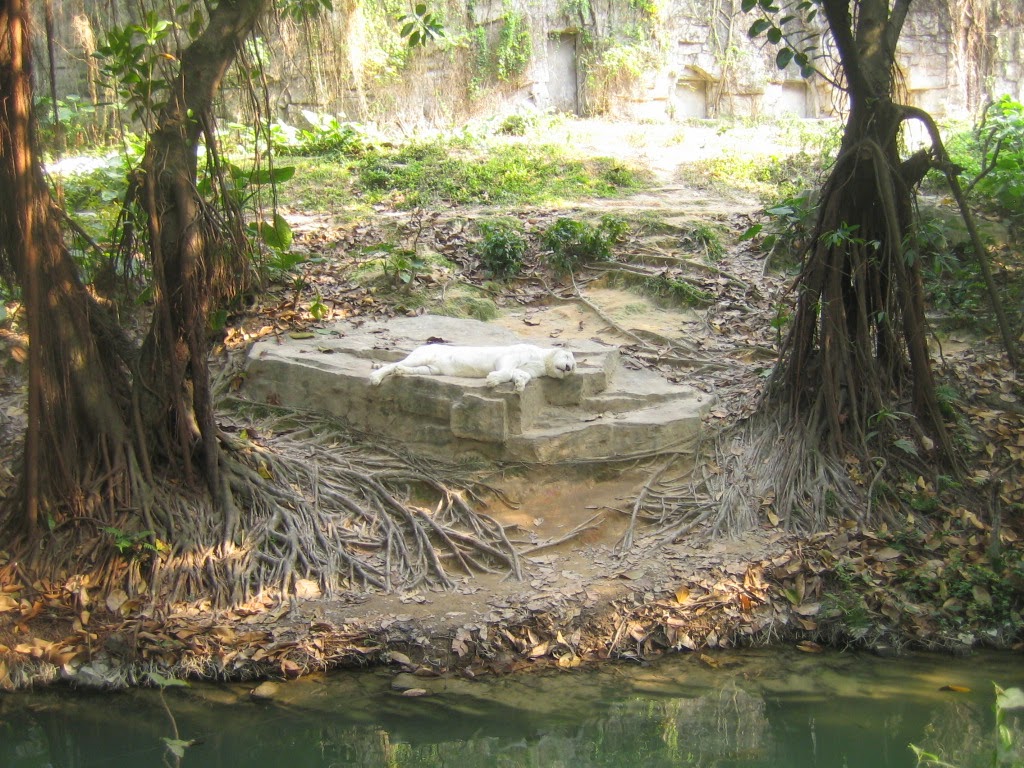 A great way to see some more animals here is to take a trip on the Safari on Wheels. By the time we'd walked all the way over there, my feet felt like they were going to come off. I was so happy to sit on that tram for the better part of an hour and watch the animals around us. 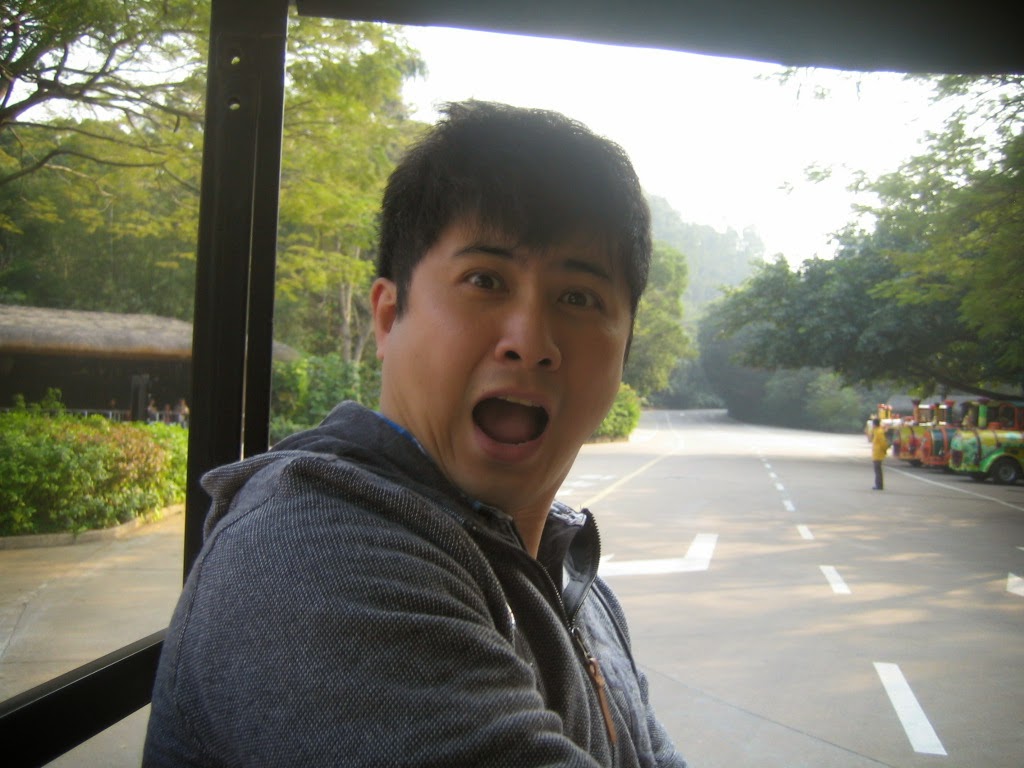 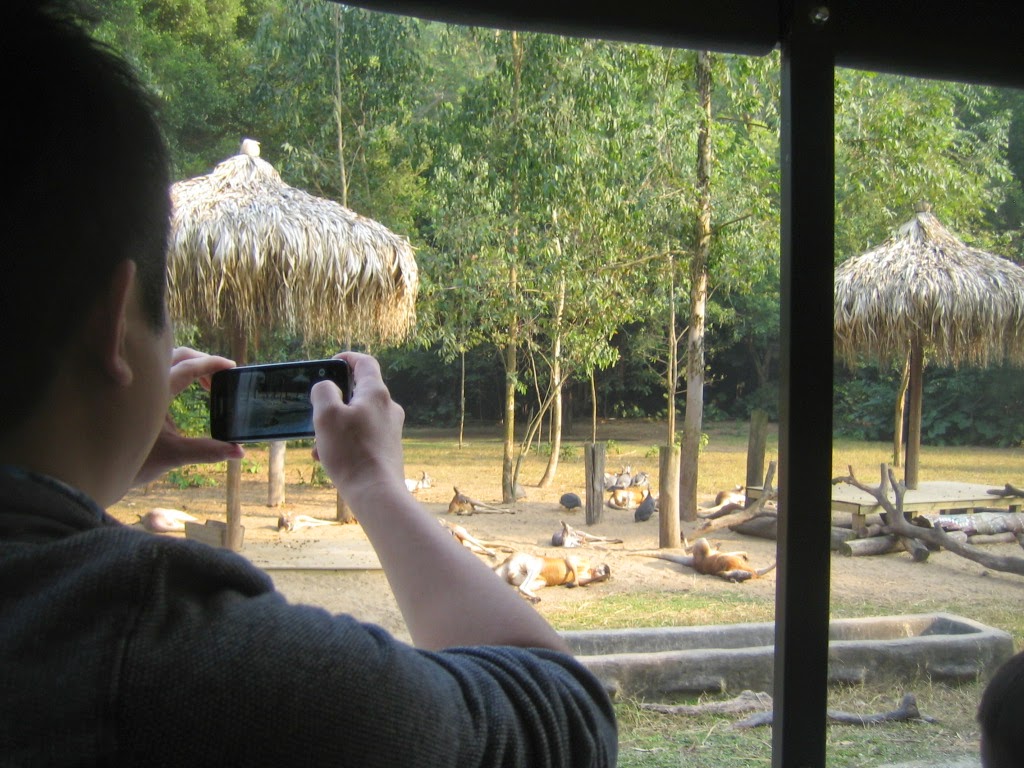 Jeremy snaps some photos of these lazy animals with his phone. 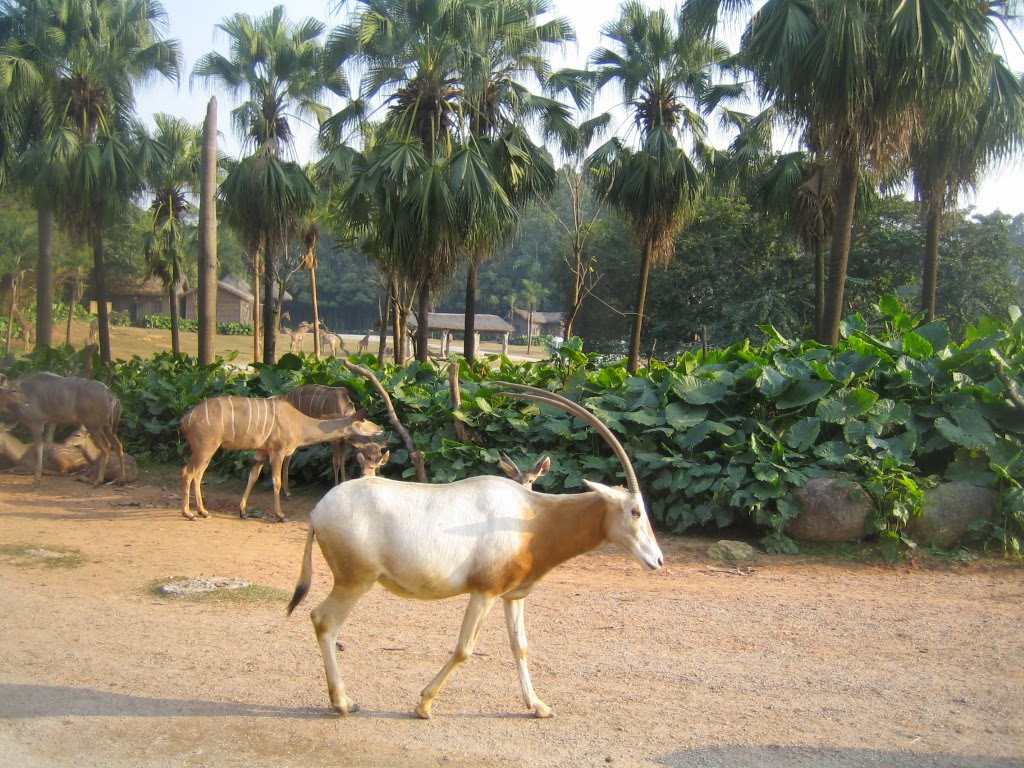 This antelope was just loping about. Is that why they are called antelopes? Hmmm... 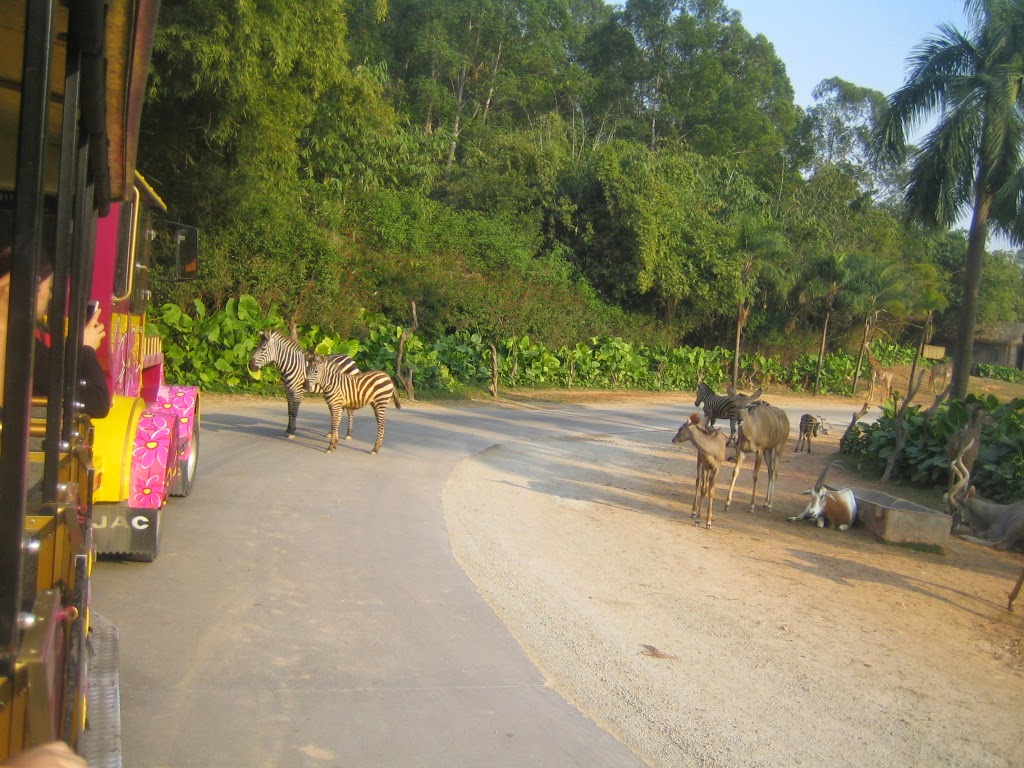 Zebras! As a child of the 80s, I will forever think of Fruit Stripes gum when I see these things though. 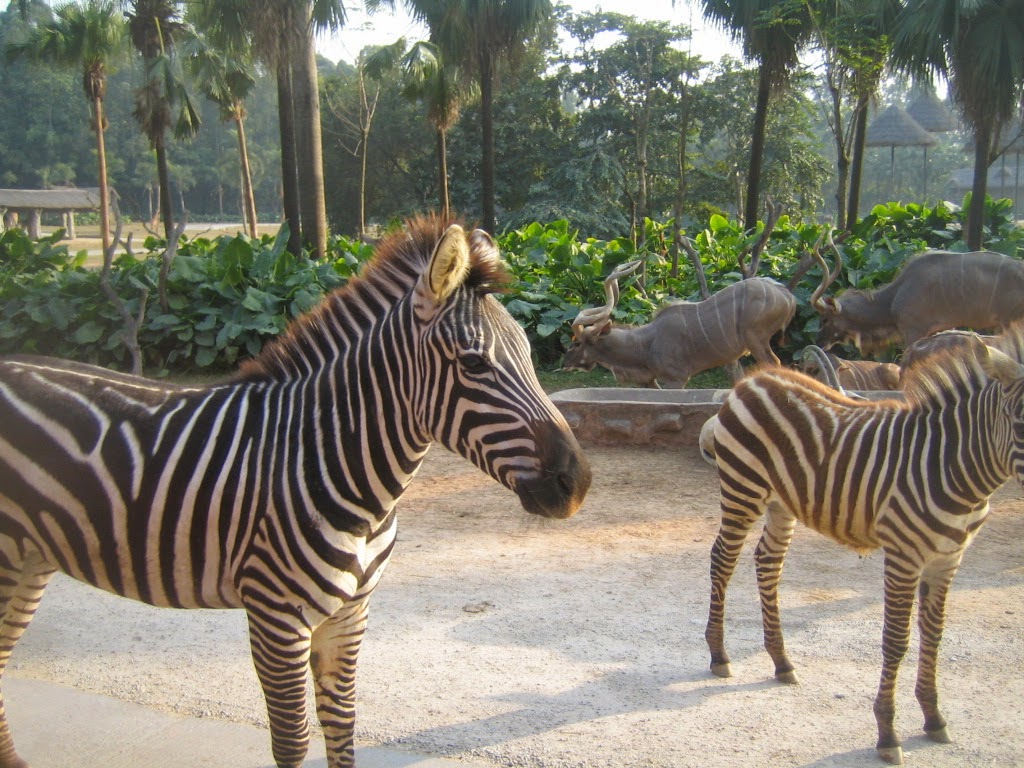 What was supremely cool was being THIS close to the zebras. This is not zoomed. I could have pet these guys from my seat. Could have. Holding Seoul was my #1 priority though. 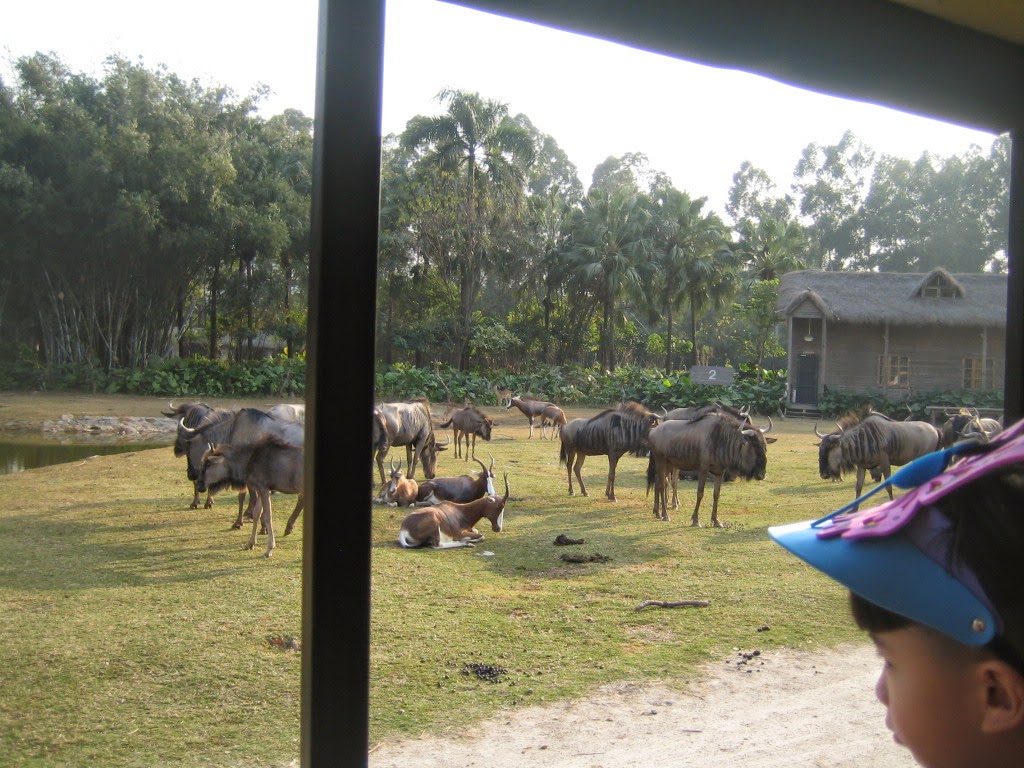 A boy in the row in front of us checks out the water buffalo.

All in all, an exhausting but absolutely worthwhile adventure. Check it out if you find yourself in Guangzhou. And now, I'll leave you with a few more family photos... 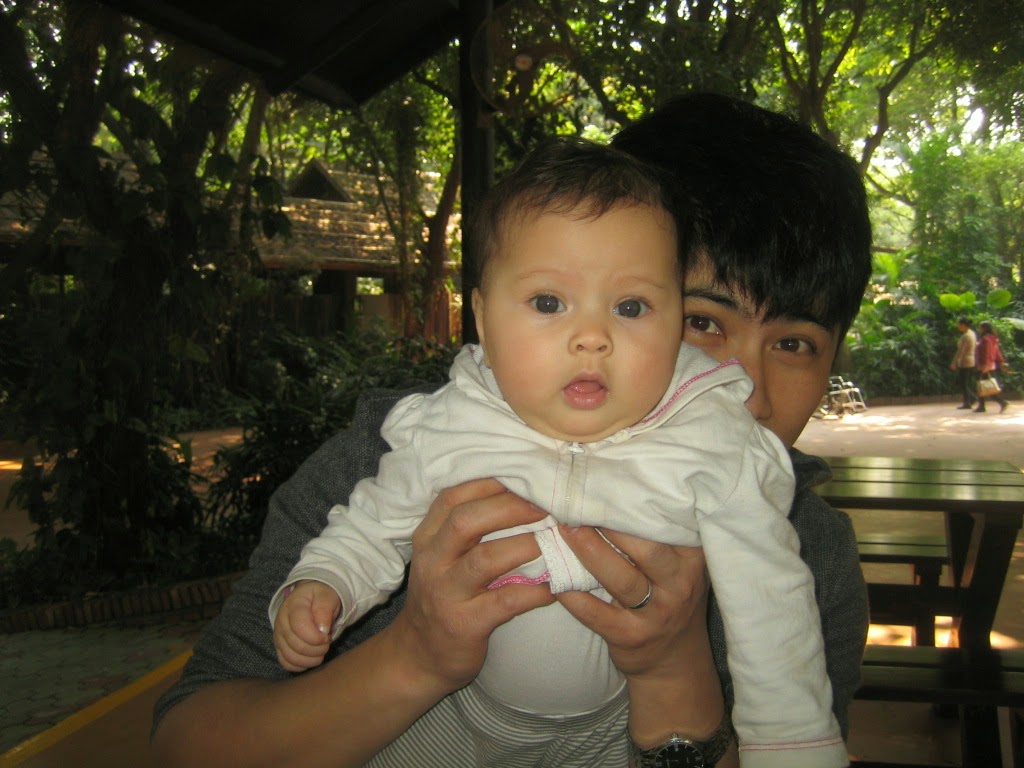 Seoul and Jeremy being cute. 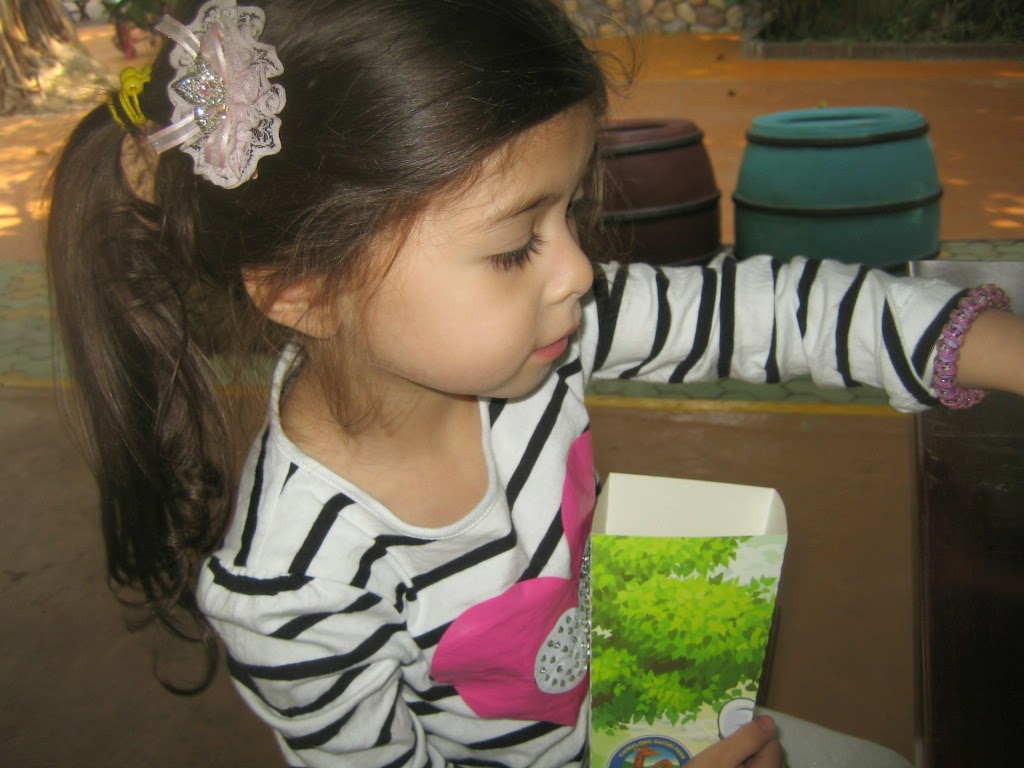 Raelynn with the infamous 15 rmb container of popcorn that she'd spilled half of. This is after she stopped crying. Oh the joys of creating memories with your kids! 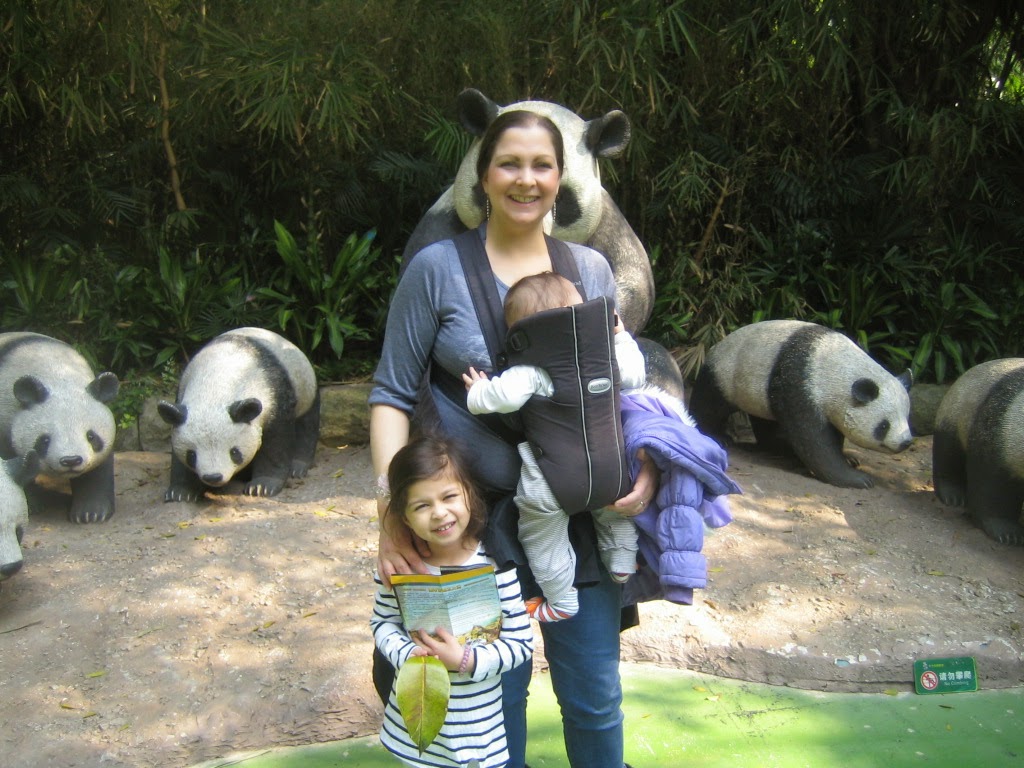 A tired mommy and her girls. 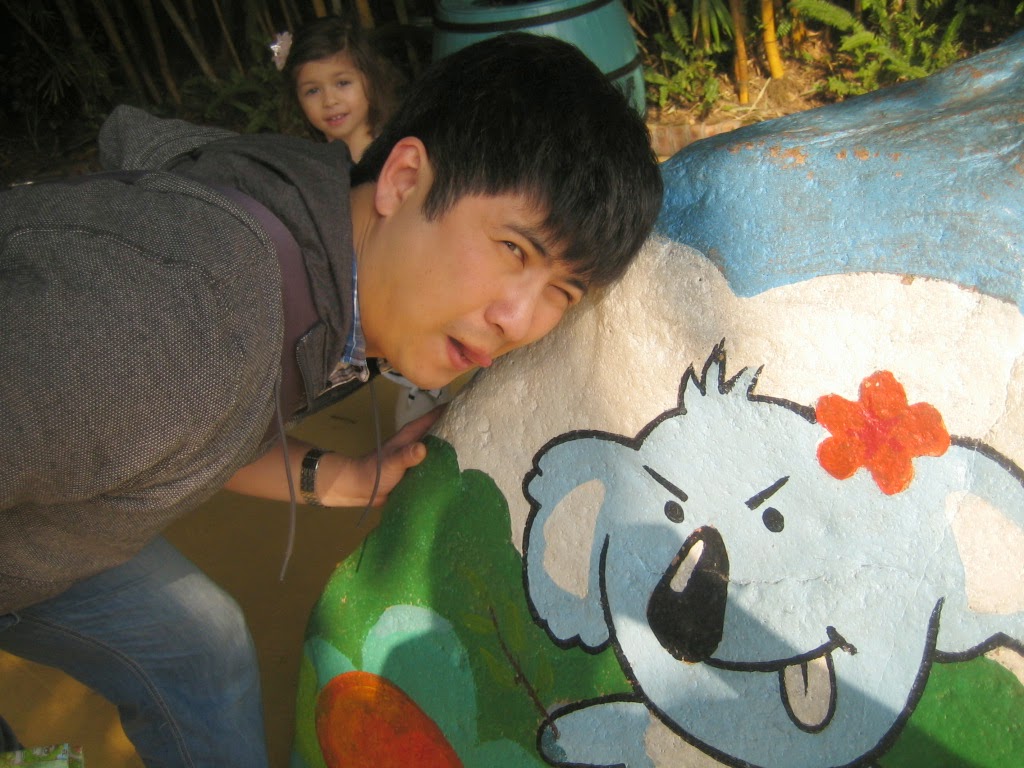 And lastly, Jeremy poses with a cracked-out koala painting, only to be photobombed by Raelynn.
Posted by JQ at 9:14 PM