Off With Her Head!

This evening, we went out for dinner at one of the restaurants on our street. We also enjoyed a couple beers with it while Raelynn watched episodes of Dora the Explorer on our Chinese iPad. It was quite nice. Until we got home and I was getting Raelynn ready for bed. That's when Jeremy tells me he has some bad news.

I should clarify here. The mug I am talking about had a cartoon yak on it. It said "Y is for yak" on one side of it. It was so adorably weird that I just loved it. 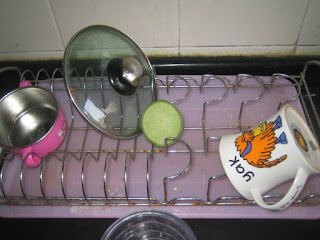 My beloved yak mug is pictured here in this photo I used a while back to show how MIL puts that damn luo bo radish thing everyfuckingwhere. RIP, yak mug!

I bought it in Korea at some discount store. They also had an "M is for Moose" which I'd bought for my brother. I kept checking back in hopes that they would have other letters and animals but no such luck.

I loved this mug because it was so unique. And now, it's gone.
But that wasn't all, apparently.

"Um, your Starbucks mug broke too."
"WHAT THE FUCK?!? How did this happen?!?!"
The look on his face said it all. I gasp. "SHE broke it! Your mother! GOD! That clumsy fucking oaf!"

You know why these mugs broke, don't you? Because that old troll stacks the dishes on the drying rack like this: 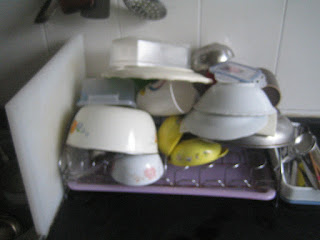 I'm just as pissed about the Starbucks mug, incidentally. It was just a plain red mug with "Starbucks" on the side, but it had been given to me with some coffee (which I never did get to enjoy as it was before we had a coffee pot at home, so I'd brought it to work and that skank girl from France that they hired after Genesis moved away drank it all without my permission. Whore!) by one of my favorite students last year, Ella.

I know mugs are cheap and I can easily get more of them. I'm just pissed that out of the 20 mugs in our home, the only 2 with sentimental value were massacred by a total half-wit. Jeremy tried to change his story and tell me he was responsible for the slaying of my mugs, but it was too late. I knew he was trying to cover for the old goat.

Lately, MIL and I had been getting along so much better. But this week, it seemed like she really wanted to reclaim her #1 spot on my shit list. All week, she kept putting this flower-patterned zip-up hoodie on Raelynn when she took her out. I should tell you that the hoodie isn't entirely hideous. Not what I would pick but paired with the right things, it's cute. And we all know MIL cannot pair anything correctly, even if her life depended on it. I noticed she used it 2 days in a row. So the next day, I made sure to lay out a different jacket (Raelynn has quite a few) so MIL would dress her in that instead. But she insists upon dressing my kid like a migrant worker by putting her in the same thing every day! Gah! She totally outdid herself though when she apparently hand-washed this fucking thing and then put it back into Raelynn's closet while it was still noticeably wet. THERE ARE 5 OTHER JACKETS IN THERE! USE THEM!!!!!!!!

So yeah. She's back at the top of the list of people I want to throat chop. Like you even thought she would ever be off that list for good. As if!
Posted by JQ at 6:44 AM