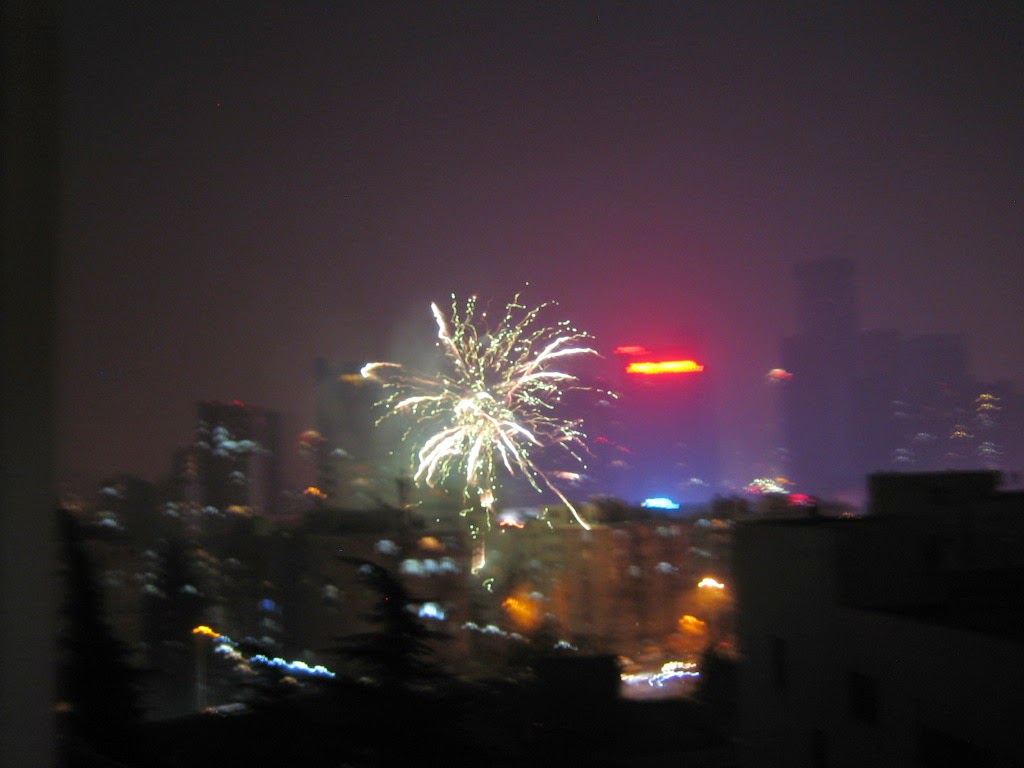 Last night was the Small Chinese New Year celebration. You might find this surprising but when it comes to Chinese holidays, particularly anything to do with Chinese New Year (CNY), I really don't mind my in-laws being around. They come here, which beats going to their house any day, because we've got Raelynn and Seoul. It's much easier to endure the holiday in the comfort of our home as opposed to the filth of theirs.

So how was this little pre-celebration of what is soon to be the year of the sheep - or goat, depending on who you ask...there seems to be a bit of debate about which creature it is and all the merchandise for this year's holiday reflects this confusion by selling calendars with goats on them and then sheep stuffed animals and all sorts of lanterns and decor with both animals on them...meh, enough about that! Let's talk festivities, shall we? 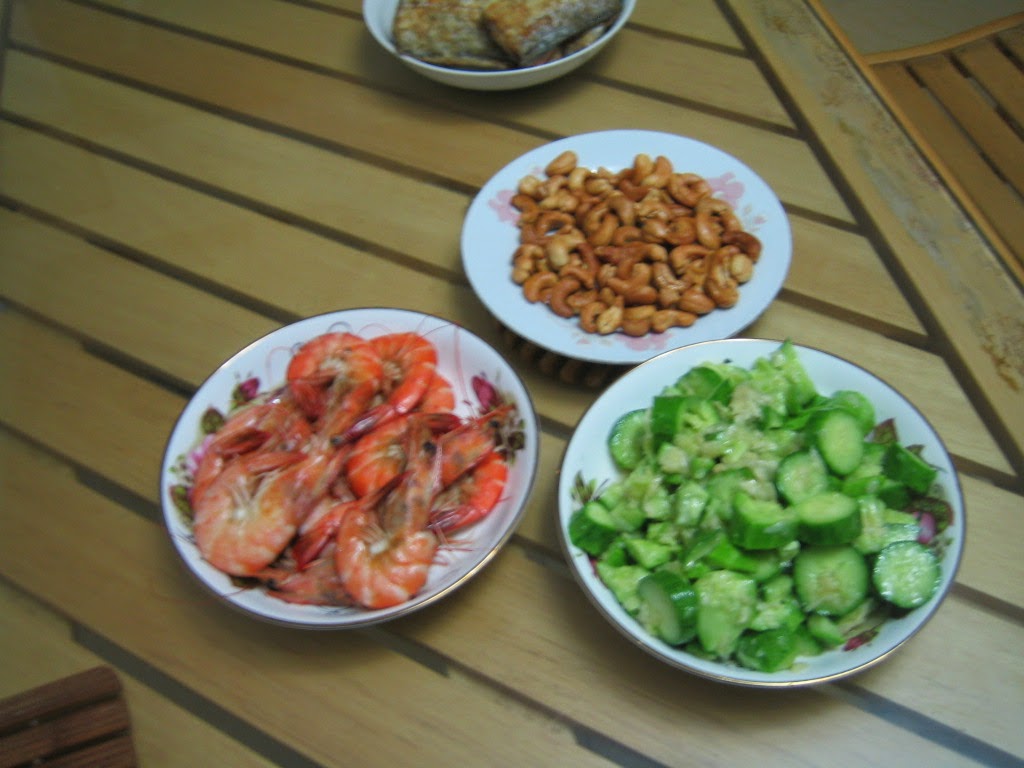 It's true that MIL cooks well for the holidays, but I was really disappointed to see such ordinary offerings. Cut off in the back is some fried fish which she has been making us A LOT lately for regular non-holiday dinners. We also have steamed shrimp, cucumbers with crushed garlic and a plate of cashews. To see why I find this meal so ho-hum and lackluster, click here to see last year's Small Chinese New Year feast. 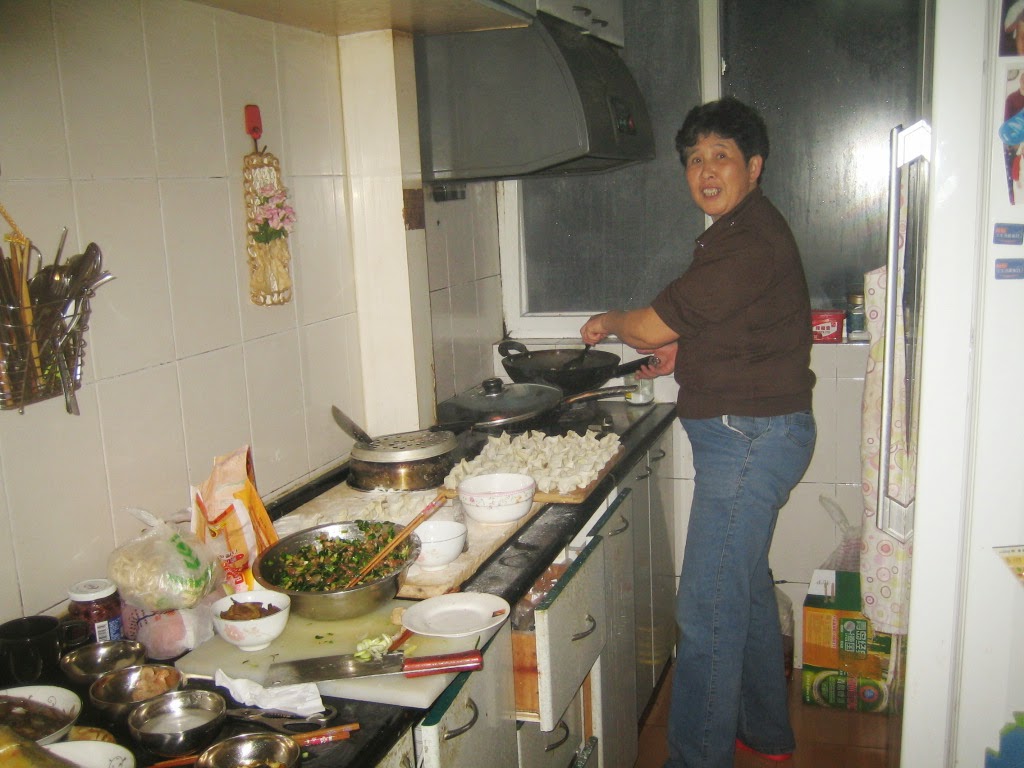 OMFG, my kitchen! Ok, calm down, calm down. She's busy cooking so I can't get mad at the mess...unless she leaves it like this when she goes home. Thankfully, she didn't. She cleaned everything up. And wow, for once, she's not wearing mismatched clothes. Amazing! 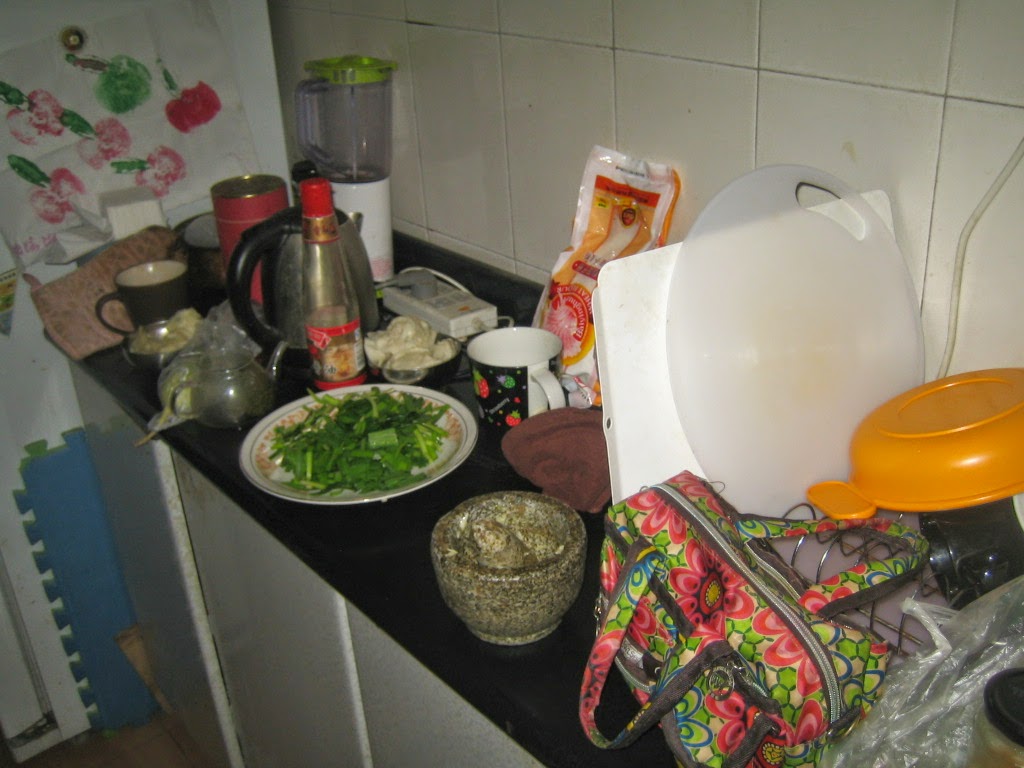 Incidentally, this is the other kitchen counter while she's in there cooking. Good grief! Even when I cooked Christmas dinner, the kitchen wasn't quite this messy! 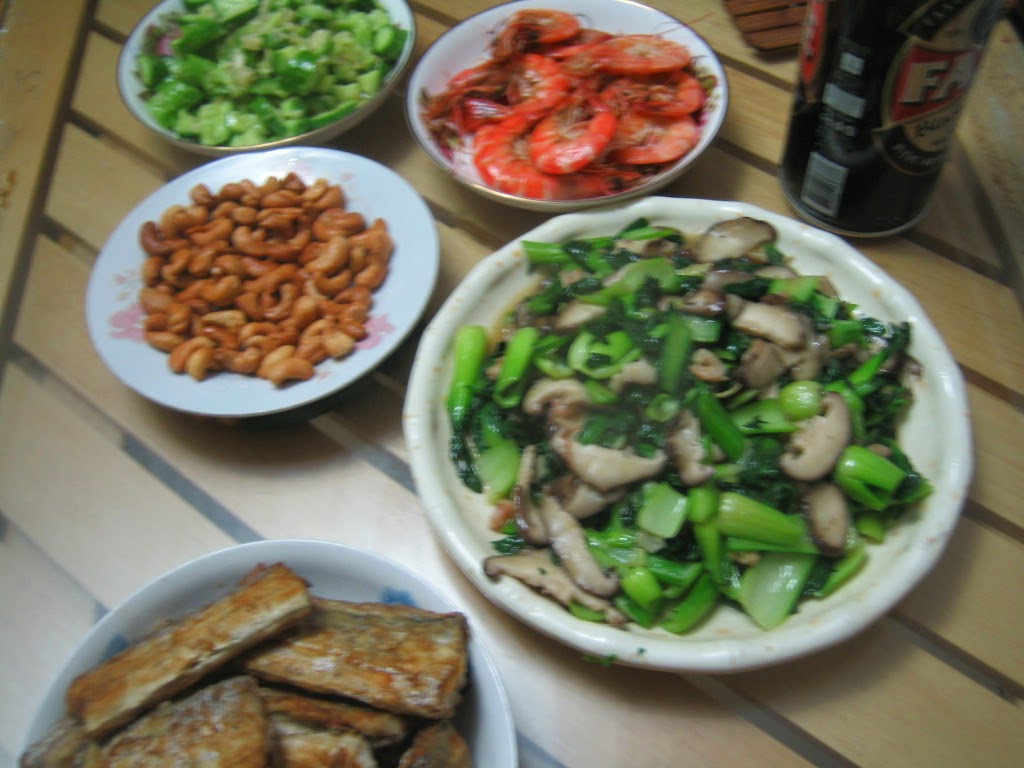 From this angle, you can see the fried fish better. You can also see this bok choy and mushroom dish. It wasn't awful, but I felt it was too salty. Sidenote: I was holding Seoul on my lap as we ate and she's such a sneaky little thing...she shot her little hand out and stuck it right into this dish. Babies are so hilarious! 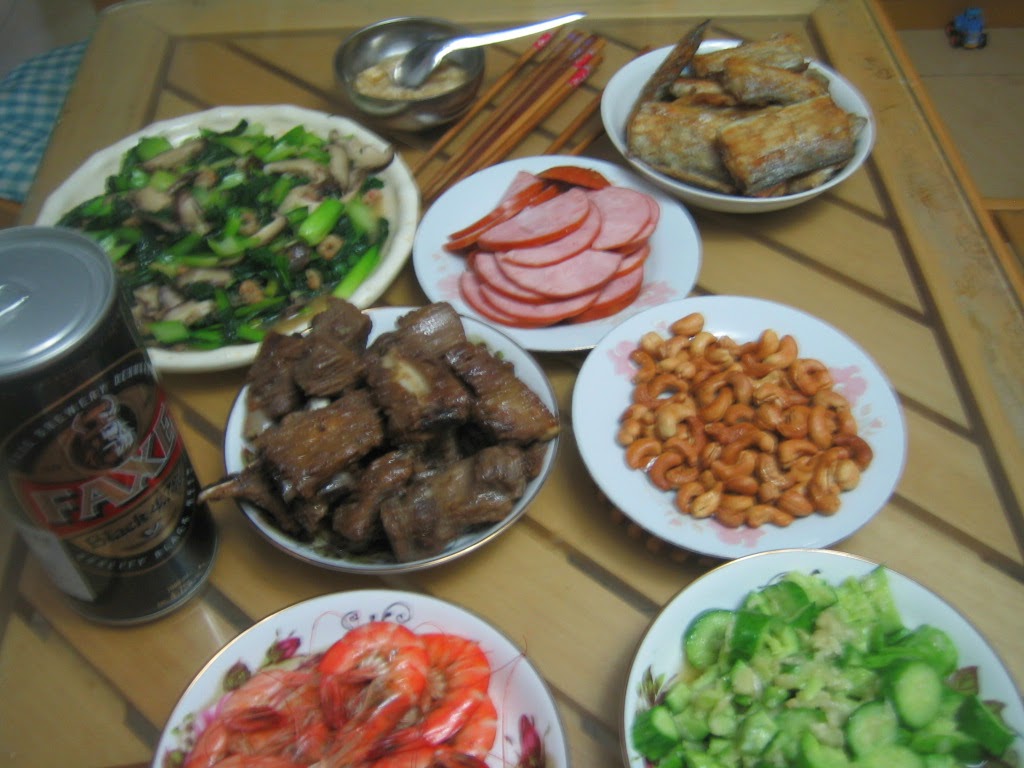 Now there's some Western-style ham slices and a bowl of crushed garlic and sesame oil that is supposed to be a sauce for that ham. Yeah. For me, it's a yes to the ham and a big fat no to the sauce. It amazes me they want to cover up the taste of the ham with something so sharp and strong as garlic.

You'll also notice the dish of ribs on the table. I was skeptical. MIL makes ribs often enough. The meat falls off the bone, which is lovely, but the flavor is just very mediocre. But not these. Oh no. These had a hint of garlic and something else I couldn't place. I had tried one to be polite. I wound up eating quite a few after that. Jeremy said she learned a new technique. I told him to tell her to always make her ribs this way. They were excellent. Good job, MIL! 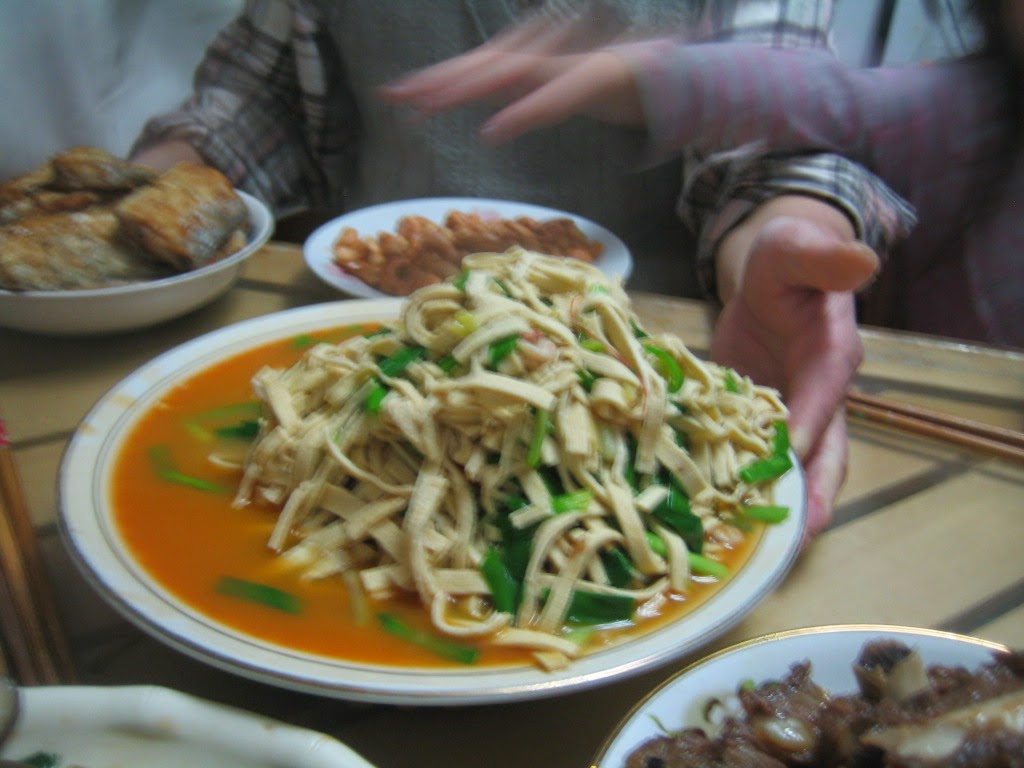 To the untrained eye, you'd think this was some noodle dish. It's not though. This is tofu cut into noodle-like ribbons. She's cooked it with leeks and shrimp. Normally, she makes this taste so bland. What she did different this time, I can't be sure but it was delicious. I'm not a fan of Chinese noodles because they always taste so mushy and floury, so having her make tofu in the style of a noodle is so much better. The tofu texture makes all the difference in this dish. 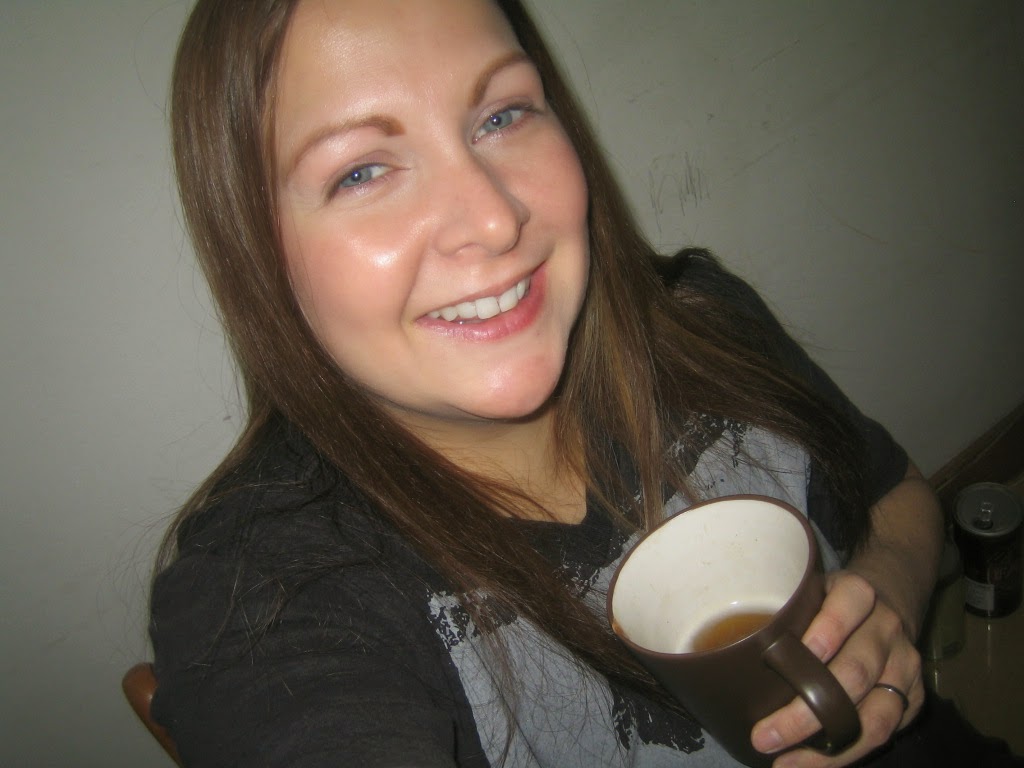 Awww yeah...I'm kickin' it with imported beer. We had a selection of Danish and German beer we bought from the wholesale market near our house. Unfortunately, my in-laws have managed to destroy all our beer mugs, leaving us coffee mugs as our only option. The look on my face says it all, doesn't it? I'm so cool I drink my beer out of a coffee mug. Try not to hate, y'all. 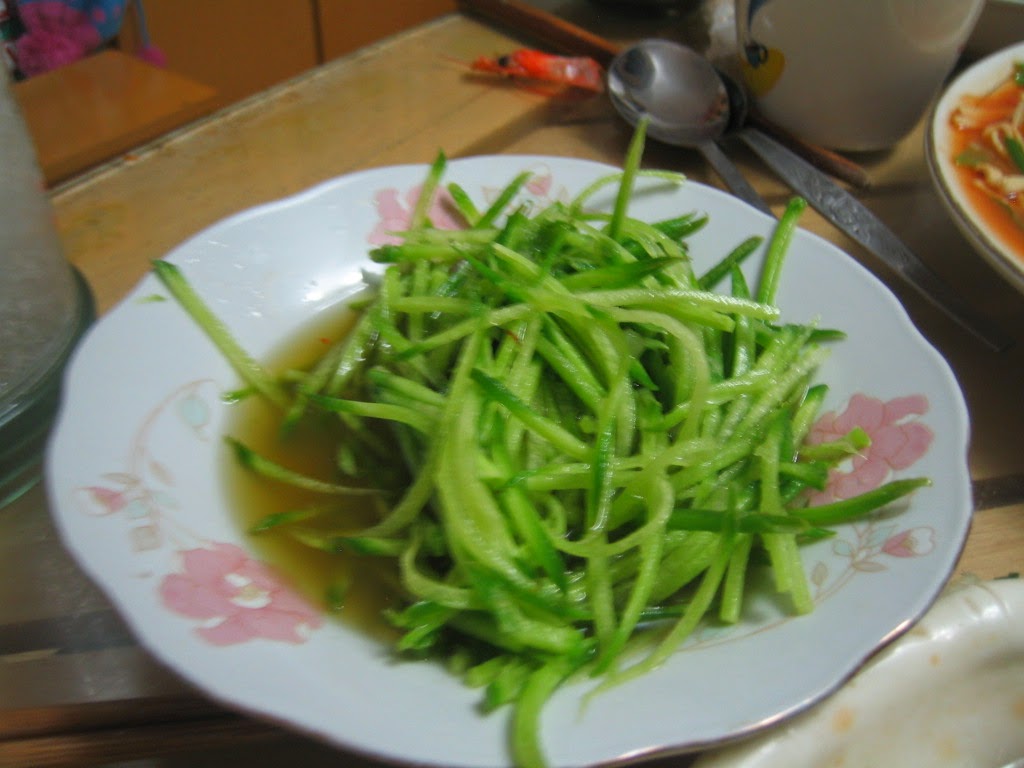 It's luo bo! Not again! But hey, she's cut it all fancy and put a really nice dressing on it. I had to leave the table for a while to put Seoul to bed (a very difficult chore indeed with all the fireworks popping outside but somehow I was successful) and when I returned, she'd put this in another bowl with orange zest. Jeremy claims it was her idea but I think he had something to do with it. I can't imagine she'd think of doing that herself. 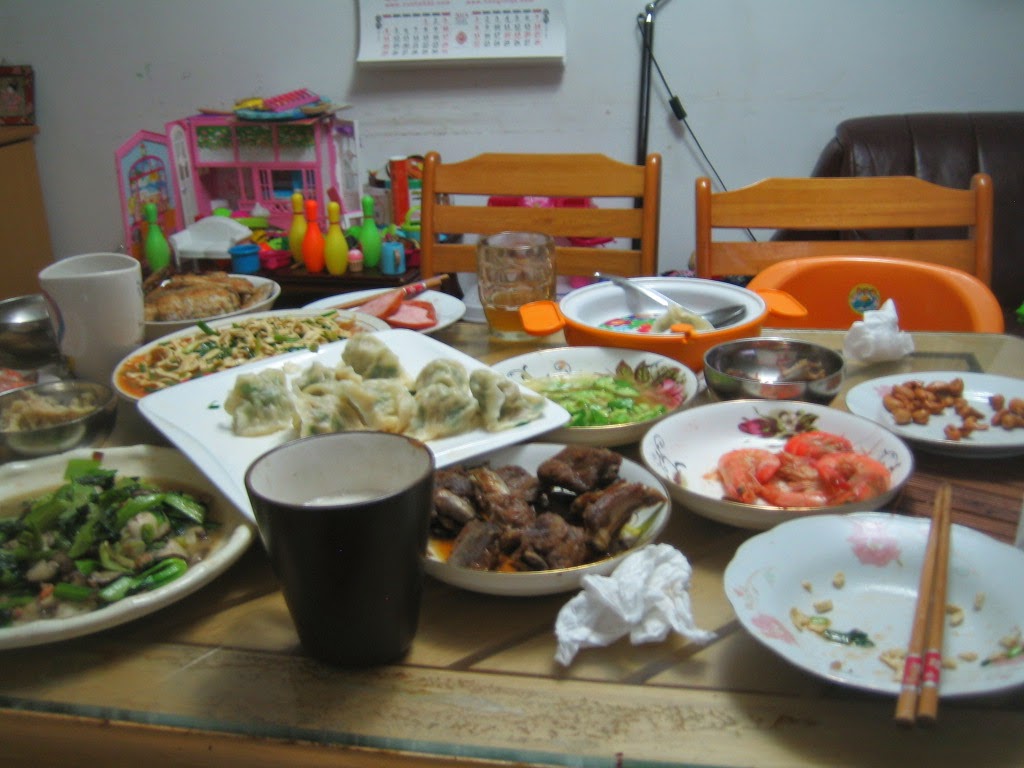 It's almost over, as you may be able to tell from the mostly picked-apart dishes. The dumplings came out after everything else. How were they? Meh, they're the same dumplings she's been making a lot recently so I'm not too excited about them. It could be that I'm sick of being served dumplings all the time. It could be that in my American brain, I feel like dumplings are something you have a few of, like an appetizer, before moving on to another dish. Or it could just be that these dumplings are just there. They're not bad but they're not amazing either. I hope the ones she makes for CNY are more exciting than these. 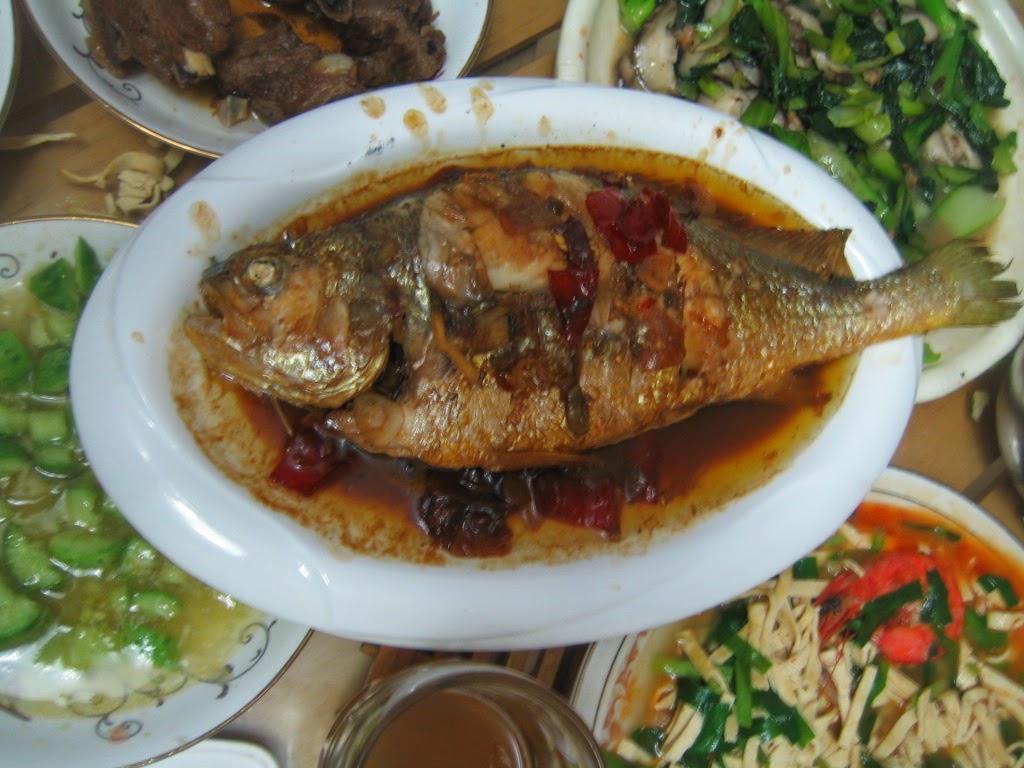 And finally, as I've said before, if you're at a big Chinese meal, you'll know when it's coming to a close when they trot out a large, whole steamed fish. This was always one of the dishes MIL cooks well but in recent months, she has changed up her sauce. She used to use a very savory and salty brown sauce. But this sauce is made with marinated red peppers. It has a bit of a kick to it, but not too much. And it's really really REALLY good. It's a great way to finish up a great meal.

She'll make this for CNY as she must for tradition's sake. Jeremy also asked her to make a few dishes I really like for next week's big celebration. I love CNY! Here's hoping that this year of the sheep (or goat) and the upcoming new year give us many wonderful things to celebrate!