Get To Your Place

When I was a little girl, we had a dachshund named Snoopy. Actually, my dad will tell you his real name was Maximallian or some crap like that but my brother, Phillip, influenced the change to Snoopy. He was a great dog. He even saved me from the neighbor's evil doberman when it'd gotten loose. But even great dogs are sometimes naughty. And when Snoopy was a bad dog, we always told him to "get to your place!" Or "GET!" for short. I need to start saying this to MIL.

If you remember the giant blowout at the end of last week, then you'll know that to avoid any further altercations, I've been requested to pick out Raelynn's outfits the night before her outings with the invalids. Which I did. But of course, MIL went back on her word. Last night, it was muggy when I picked out the clothes. I picked a Hello Kitty t-shirt and pink shorts. Well, apparently this wasn't warm enough attire for this morning. She put her in a pink polo shirt and black polka dot pants. It actually looked okay enough, I suppose, though I have always kind of despised polka dots. But these pants I didn't mind because the dots are quite small and the style of the pants is actually more akin to leggings. In colder weather, I always pair them with a red, black and white ladybug dress that's become a bit too short but with these leggings-like pants, looks fabulous.

I'm not angry with MIL because the weather changed. I'm angry because that old bag, despite changing her into this other outfit, bought Raelynn even more pants. More polka dot pants! 2 of the same pair! And they're not any thicker or better than the 20 other pairs of fucking pants this child has. 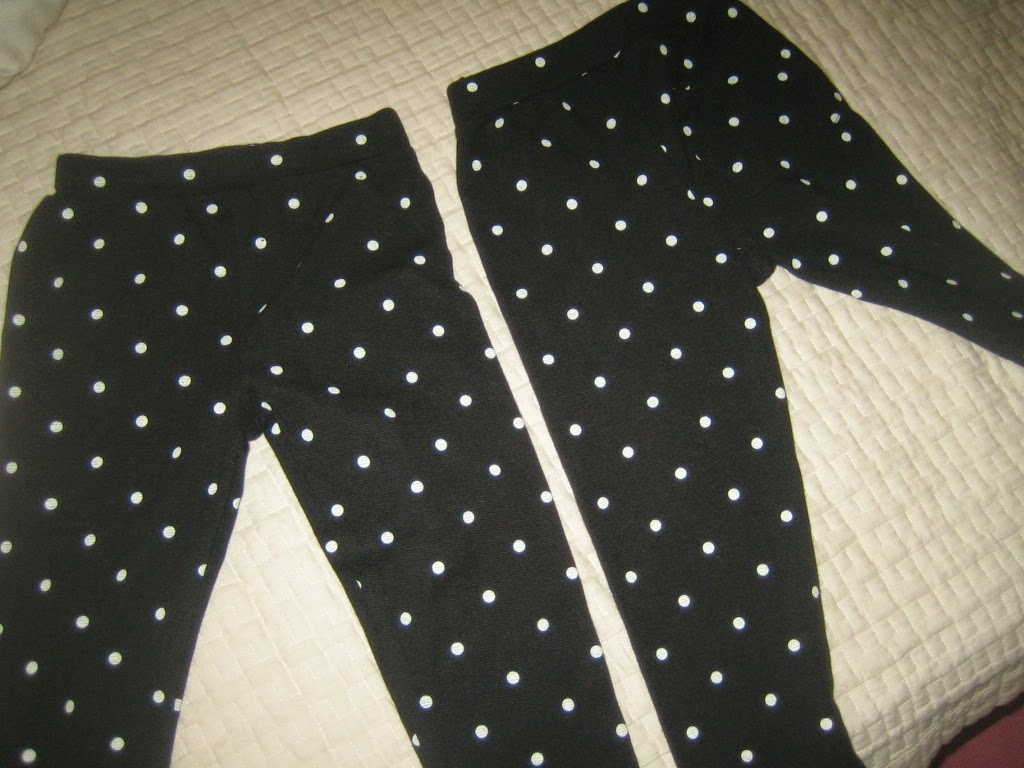 Of course MIL thinks this shit will go with everyfuckingthing. She's ALWAYS wearing her vomitous polka dot pants. I have photos of her wearing them in this post, if you want to see.

Polka dots are not my style, but when done right, or paired with the right things, they can look really smart. MIL just throws polka dots with anything she sees. Or flowers.

I complained to Jeremy who was as aggravated as I was. He actually told someone at church yesterday that he couldn't wait to move away from his parents because they interfere in everything we ever do and contribute to Raelynn's bad behavior all the time. I hope we can escape before Seoul gets too big to be influenced by those neanderthals.

Speaking of Seoul, all her clothes are hand-me-downs (except for one thing my friend Natalie sent - thanks again, girl! xoxo) and all the pants she has available to her as the weather starts cooling down are bigger. Why didn't MIL buy her some pants? No, she HAS TO buy more pants for Raelynn because a closet full of them is just not enough. She has to constantly butt in and push our limits. You're not the boss of us, bitch. Watch your fat, old ass.

I'm angry that my husband specifically told his parents not to do something and they deliberately disregarded it. And that we came to an agreement about having me pick out Raelynn's outfits in advance and she just pushes and manipulates until she gets her way. I asked Jeremy if he could help me make a sign in Chinese that says "Get the fuck out of this closet and go fuck yourself," but he wouldn't let me. He didn't get mad like he usually does when I suggest these things though so I'm thinking he was quite tempted to put the sign up himself. He DID do that to a big refrigerator box someone left in our stairwell for a week though. Like the bike that took up space, it sat there on the landing between our floor (6th) and the 5th floor. A closer look at the box would reveal it had been for apartment 801. So those lazy assholes just dragged it down a few floors and left it. I can't be sure exactly what he wrote on there but I hope he dropped a few Chinese f-bombs in there. When the box still hadn't moved, he kicked the crap out of it and launched it down to the 5th floor landing, spilling out packing foam all over the stairs. That finally did the trick because when we came back, the box, the foam and the angry Chinese note from my husband were all gone.

I was really agitated by all this earlier this morning, but Jeremy reminded me that soon, Raelynn and I will go back to school and MIL won't be able to dress her like a street person anymore. We'll just have to worry about Seoul. And he's given his word that if his parents do not keep things sanitary and put her in any danger, that he will do something about it. I hope so because if not, I'll have to maim them with my bare hands. Or use these pants and the other fugly shit she's ever bought to tie them up and kick them down the stairs as I yell "GET!!!!"