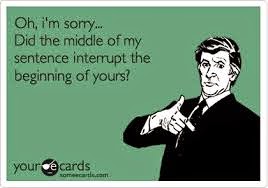 If you've been reading my blog for a while, then you are fully aware of how annoying my in-laws can be. But if you're new around here, perhaps you think I might be a little too harsh. I'll concede that I'm sometimes a bit of a bitch, but in my defense, I really do try to be nice. I mean, why can't I be nice to someone who comes over to help me with the children and cook us some meals? Shouldn't I be grateful?

Largely, I am. Even if she continues to cook vomitous bowls of things that perhaps once resembled food but now would be considered partially digested (you be the judge...click here). I try to smile, remembering that she just wants to help. And that soon enough, I'll be freed from her cooking catastrophes.

That being said though, there are just some things she does that take me from zero to stabby in .0001 seconds. Try as I might to conceal my rage, it just boils over. I'm hoping that by typing out what really gets my goat about the old goat right here, that maybe it will keep me from completely blowing my top.

Soap.
After we had Raelynn, Jeremy trained MIL on how to use soap. Watching him stand in the doorway to ensure she used soap and scrubbed her hands properly made me so happy. Perhaps it's not entirely her fault. In many places in China, you will be hard-pressed to find soap in the bathrooms. Unless you're at an upscale establishment, don't be surprised when you go to wash your hands and find there is no soap. And only cold water. My husband once explained to me that Chinese people falsely believe that running your hands quickly under cold water is good enough for cleaning them. Um, no, China. No, no, no. Get some soap. So MIL uses soap, which is great, but every single time she reaches for the bar of soap. The one Jeremy uses in the shower (I use a shower gel). We have a big soap pump of anti-bacterial soap right next to the sink. It's by Walch and it's in Chinese even! Yet, she pushes it out of the way and grabs the bar soap. I have no idea why. Remember, we have a typical Asian bathroom where there is no shower stall but still, on our counters, I have moved the soap tray all the way by the shampoo and conditioner in hopes that she gets the hint. Jeremy can't change her but he did put in an anti-bacterial bar of soap which makes me less annoyed but only slightly. JUST USE THE PUMP SOAP!

Cold Water.
The other day, I was quite thirsty. I made some green tea and so I could drink it right away, I added cold water from our filtered water tap. She began squawking loudly about how that cold water was bad and hot water is better. I just gave her my patented bitchface and told her she's crazy. I'm thirsty. I need to drink something now and scalding hot beverages are not refreshing when you are parched. Of course, we already know how she feels about cold things though, don't we? Ugh.

The Refrigerator.
Our refrigerator could definitely be more organized. But when MIL comes over, trying to keep it orderly is absolutely impossible. This morning, I opened the door to get eggs out to make for our breakfast. As I did, I was greeted by a plate of uncooked fish filets, a bag of raw meat in the same bag as raw dough, and all kinds of atrocities peppered in with OUR things. She just shoves her barfy bits up in there and now there's hardly any room for real food. Oh, and for good measure, she left vegetables outside of the refrigerator. My level of stabbiness is through the roof. 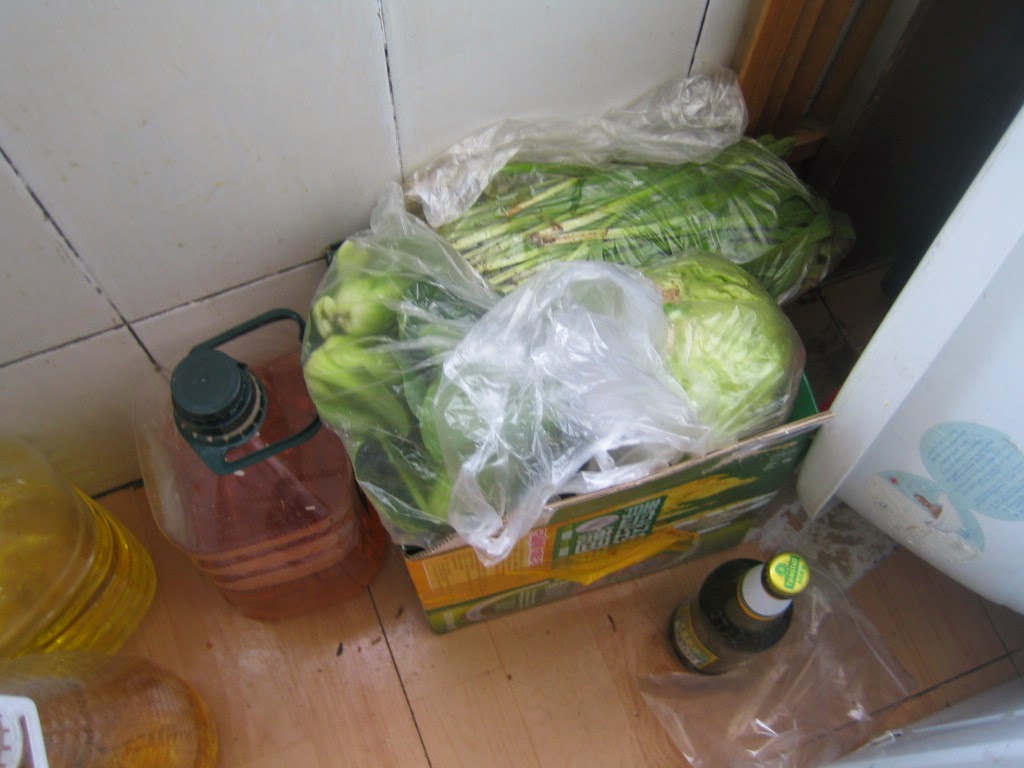 Here's her pile of vegetables. Outside of the refrigerator. On top of a box of beer with one beer removed for whatever reason. And three...THREE! Three different containers of oil. When she came over less, our oil lasted so much longer. 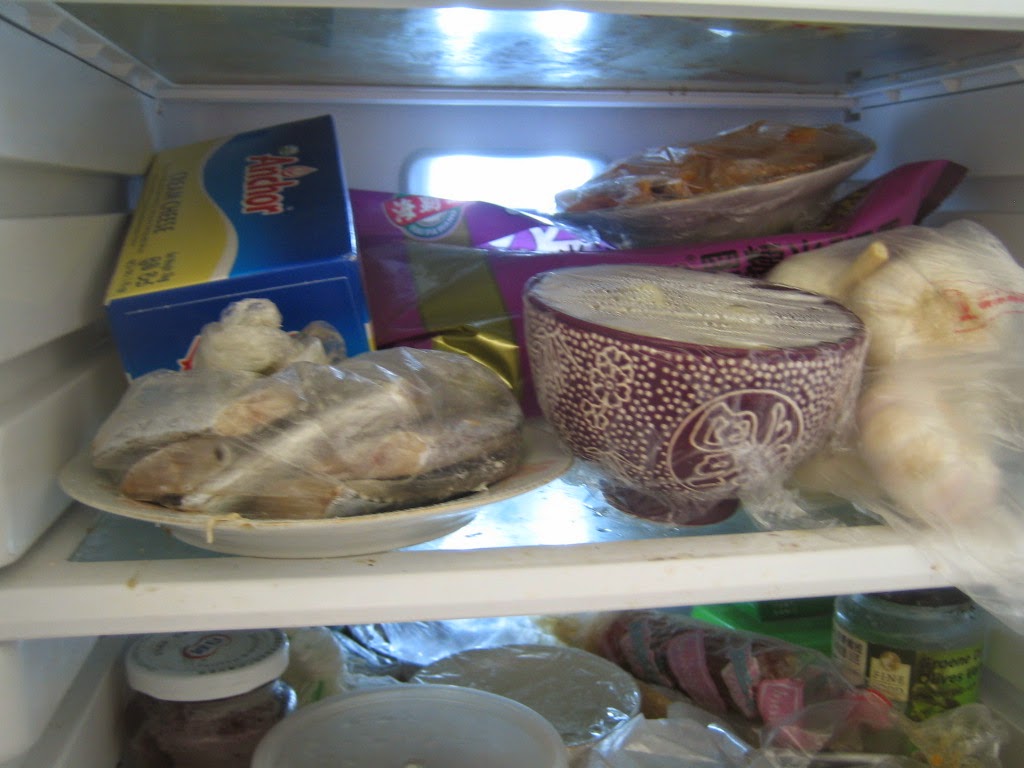 My beautiful cream cheese from Australia is shoved to the back to make room for her fish filets. She has made us fried fish for the past 2 nights and I highly suspect she will do the very same thing again tonight. Ugh. 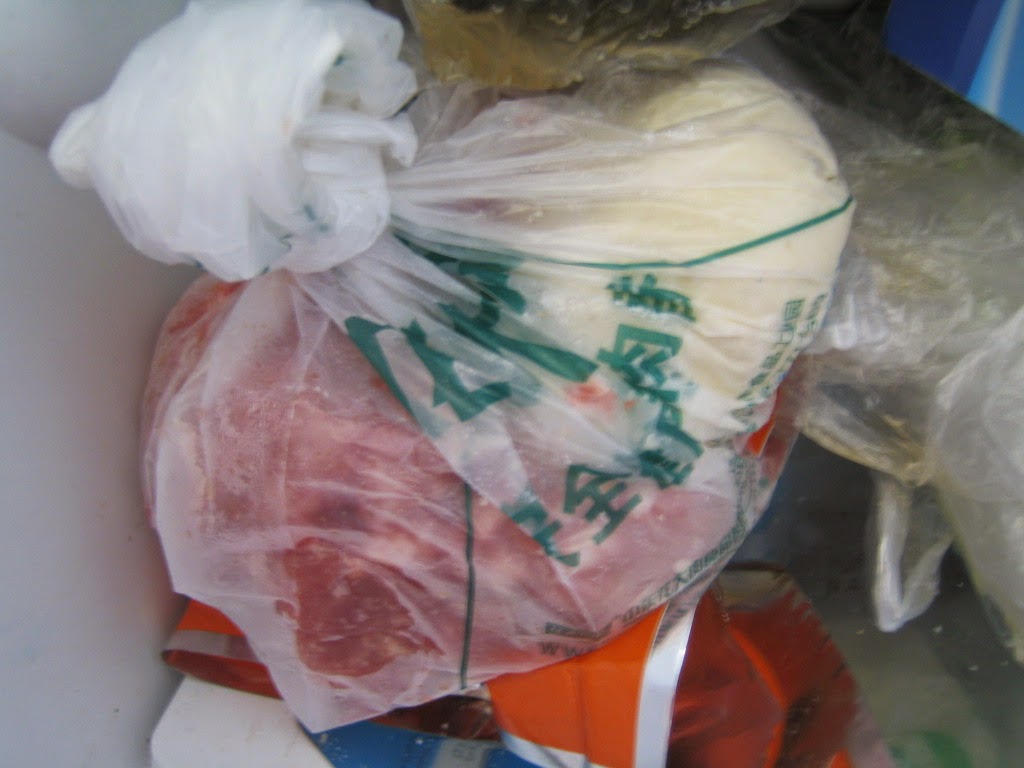 Here is the raw meat coupled with the dough. I just can't even. Looking in our refrigerator makes me so incredibly sad. The only consolation I have is that it must be way better than my in-laws' refrigerator. You do remember their kitchen, right?

Interrupting.
And this one is without a doubt THE worst. Just know that it pisses me off when ANYONE does it. Less so when it's Raelynn just because she is learning how to use "excuse me" but thinks that she should say it any time and not only when it's important. For example, she'll pester Jeremy and me while we're talking, repeatedly saying "excuse me" over and over until we acknowledge her and then she says something like, "I have a red shirt!" Annoying as that is, we're working on it with her. She is, after all, just about to turn 4, so we cut her some slack. But you know who doesn't get any slack on this? MIL.

Seriously, the woman just talks and talks and taaaaaaaaaaaaaalks. She never shuts up. It's the worst when my husband comes home from work. He and I will be talking and she will just come up and start talking in Chinese over what we're discussing. I know he's annoyed by it too but he says nothing. He just ignores her. I shoot her my patented megabitchface (even more severe than regular bitchface) and she nods and retreats. But then, seconds later, she's blabbering away again. I HATE BEING INTERRUPTED! Why can't she tell her son that she needs to talk to him when we're finished with our conversation? Or just wait for us to finish talking before she says something? She does it EVERY SINGLE DAY. No joke. I about flipped the table yesterday when she did it. Between her interruptions and Raelynn's interruptions, I'm amazed Jeremy and I actually get a chance to speak to each other.

She also just blabbers on and on from the kitchen, as if anyone is listening to her. I asked my husband if he was listening to her. No why? Because I think she's been talking to you for a good 5 minutes from the kitchen. Either that or she's completely batshit crazy now, thinking she's Belle from Beauty and the Beast and conversing with the dishware. It honestly could go either way.
Posted by JQ at 11:51 PM