On Sunday, after we left church early (much thanks to Raelynn's ultra-embarrassing behavior that caused us to scoop her and our coats up faster than Superman), we found ourselves in some truly ridiculous traffic. Trapped in the car with one bratty child and a small but sweet baby, we spent part of that time lecturing Raelynn about how she should behave and the rest trying to decide what to do once we extracted ourselves from the gridlock.

Jeremy suggested going out to eat but after the tantrum Raelynn threw, I didn't think it was a good idea to sit in a restaurant. Then he suggested we stop by the wholesale market near our home so we could buy a few cases of beer for Chinese New Year gifts for the relatives and also take home some street food. That was a good plan, perhaps the best plan of all simply because Seoul had fallen sound asleep so us gals could just wait for him in the car.

He's not gone long. He comes bounding back about 10 minutes later with a happy young guy in tow behind him, helping him carrying 2 of the 4 cases of beer. See, on the day after the big Chinese New Year celebration, you have to go around and visit the older relatives. Like we did last year.You have to bring some sort of gift or it's considered very rude, probably as rude as not going at all. All over the city now, gifts of cases of beer, baijiu (a very strong Chinese liquor), teas, fruits and all kinds of things are being bought up as quickly as they're sold for this occasion. You could wait until you venture out to visit these relatives but then you're at the mercy of whatever few stores are open and the incredible markups they put on their price tags.

As the young guy helps Jeremy put the other 2 cases in our car, he spots me. He asks if I'm Russian. No, she's American, my husband tells the guy. "Mei guo ren! Li hai! Li hai!" or "American person! Awesome! Awesome!" he shouts. Yeah, we are pretty awesome, us Americans.

It's now that I notice my husband has no street food for us. He explains all the vendors are nowhere to be found, likely because they've already taken off for the holiday. and then he says something horrible: "Hey, let's go to my parents' for lunch!"

Suddenly, I hear screaming. I realize it's coming from me. One of those long, slow "Nooooooooooooooooooooooooooooooooo" screams. The baby had already woken up when the beer guy was loading up the car. She was intrigued by this wailing of mine. "I'd rather eat out of that garbage can!" I sulk, pointing out the window at an overflowing trash receptacle. Jeremy pats my hand and tells me if we just have a casual lunch with them, he can get them to leave us alone for the rest of the holiday, excluding the big CNY dinner of course. He's off work now for the holiday so he doesn't want his parents intruding on our time together either. Knowing that I'm still sad about my parents having to cancel their trip, he also offers me the most blissful gift of all for having to endure a meal at their horrible home...he says he will take me out to Shangri-La later this week. Ok, I tell him, but if I wind up with diarrhea, you owe me 2 separate Shangri-La dinners. He laughs at this but agrees, knowing full well this might be a possibility.

I also negotiate that he immediately pour me some alcoholic beverages once we get there. I wanted to attempt to be cheerful and let's face it, being around them does NOT make me a very chipper person. As we clomped up the stairs to their stink shack, I remembered that I could at least amuse myself by taking photos for this blog.

I haven't been forced to dine at Chez Puke, also known as my in-laws' house, in a year. Not since the last CNY. They rearranged the furniture but it's still all kinds of gross. Have a look... 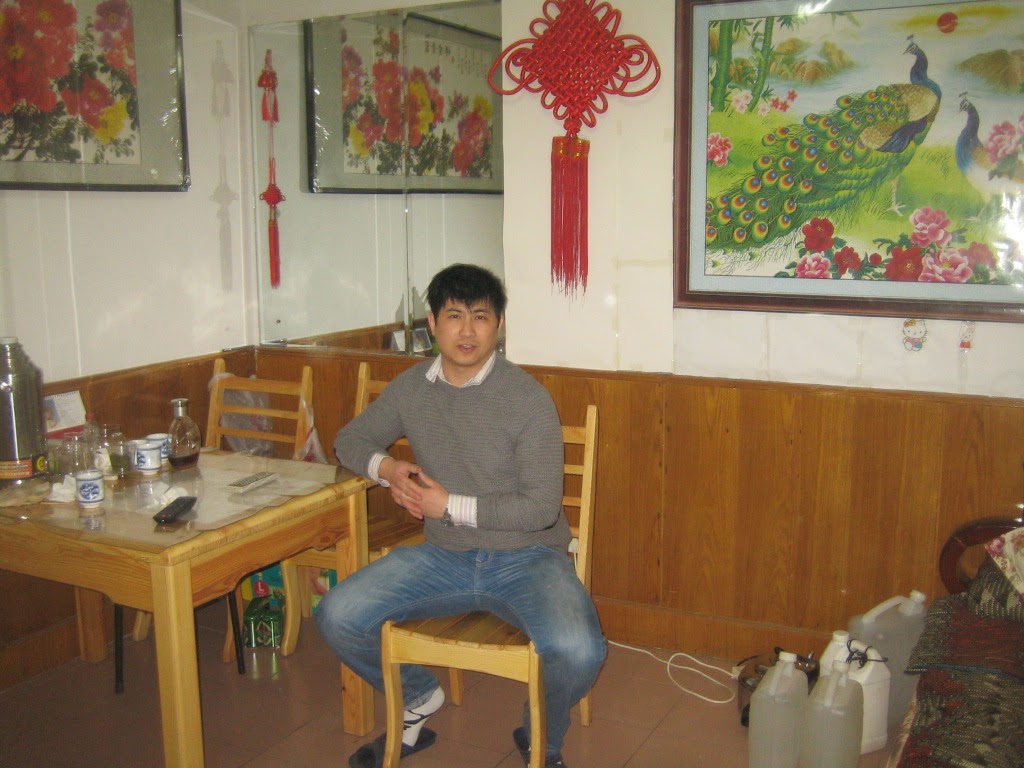 Jeremy shows me where he sat for that ill-fated haircut of his. FIL has inexplicably covered most of the mirror on the wall behind Jeremy too. It made the place look bigger. Not anymore though. 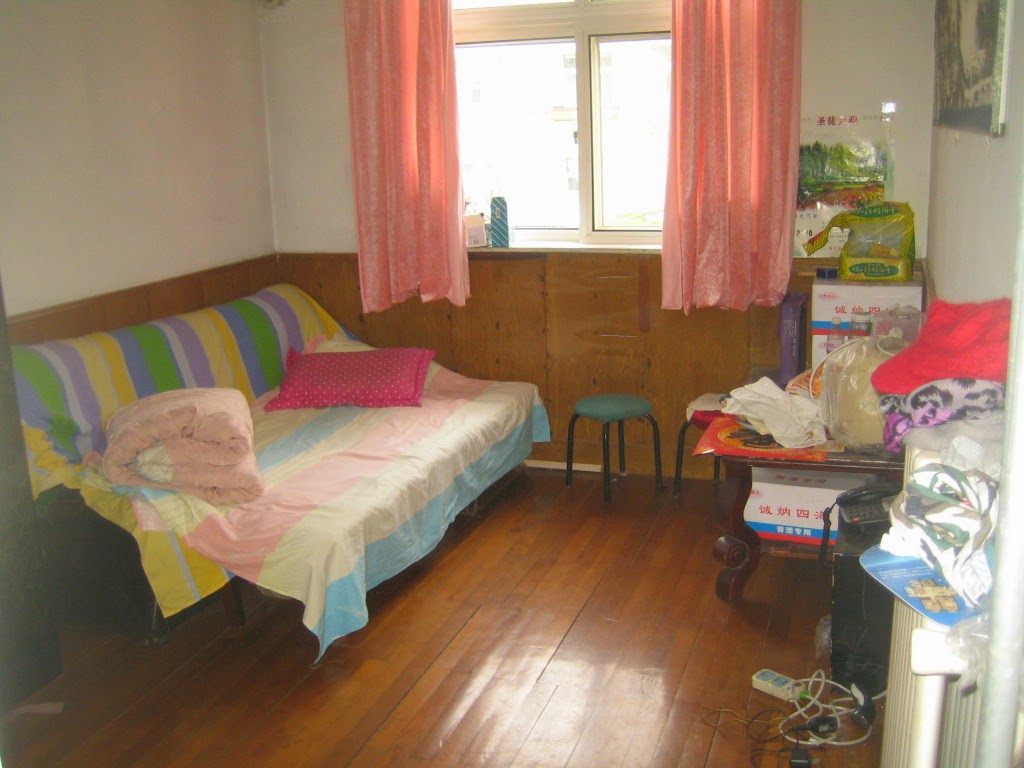 This is their 2nd bedroom where the bed they gave Raelynn once was. Don't get me started on that bed again. And it seems all Chinese people's houses I've ever been to have a ton of random stuff that no one ever uses but they pile up for some day that will never arrive. 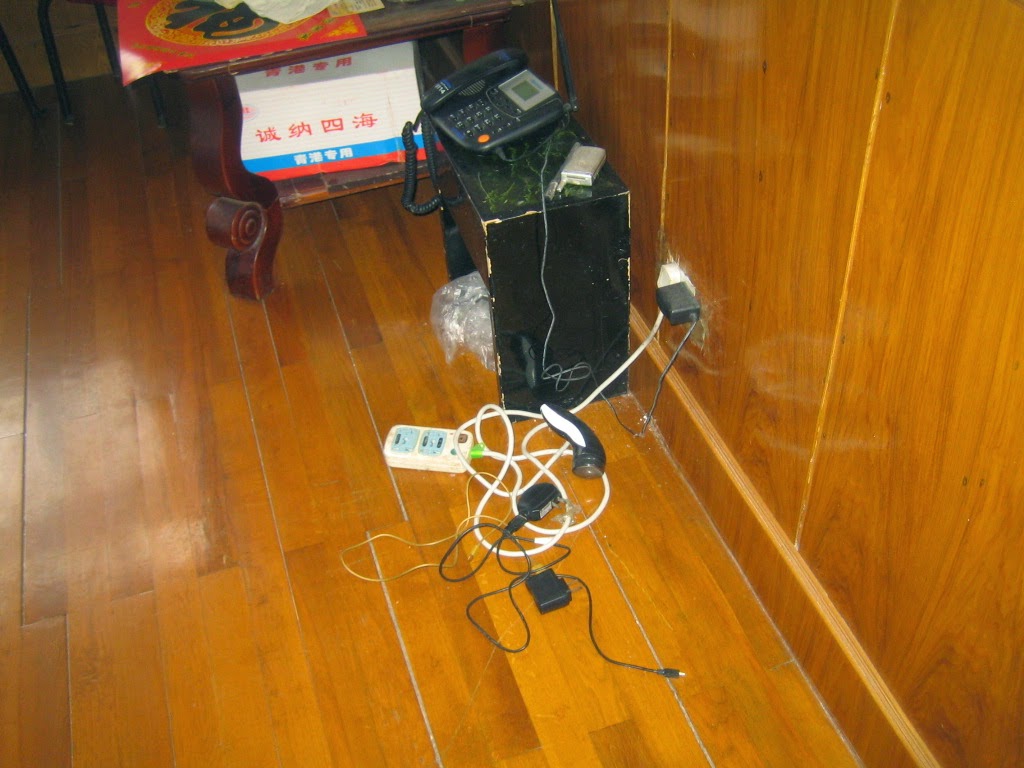 This tangle of cords on the floor is very typical style for my in-laws. 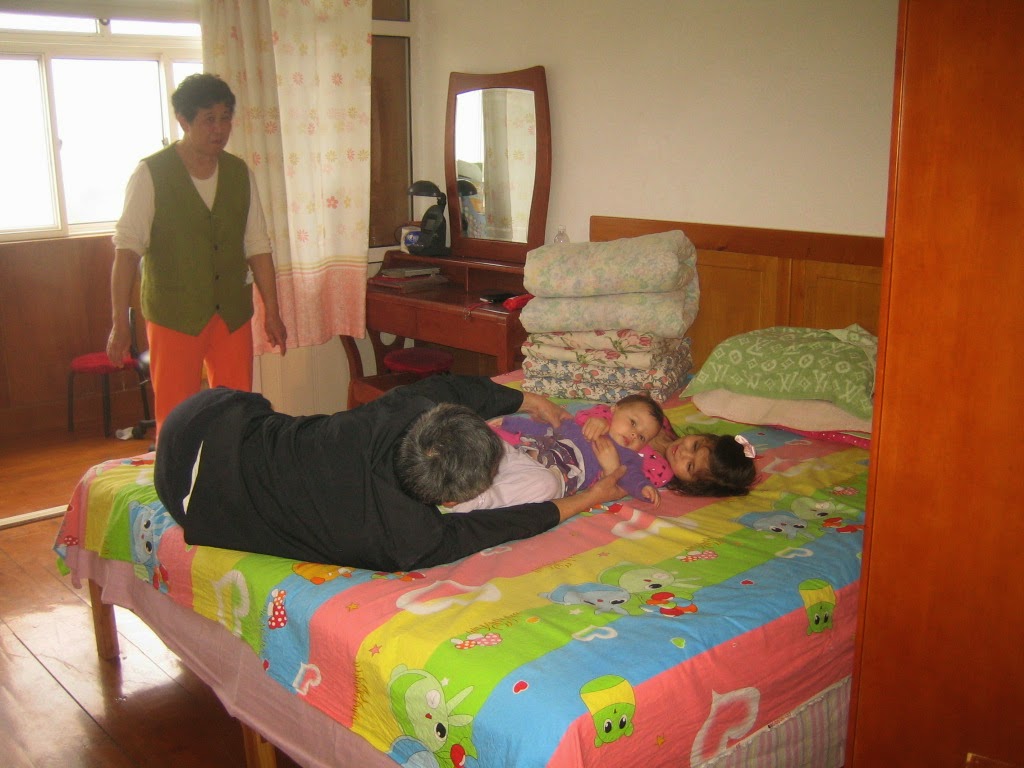 Here's MIL and FIL's bedroom. I looooooooove that they have this giant version of the insane acid trip sheets they gave both of our daughters. What, was there a special on this fabric? It feels like burlap, incidentally. I will never understand these people. Anyway, Raelynn and Seoul are playing and FIL is dutifully ensuring neither one of them falls off the bed. Their bed used to be up against the other wall but now there is space on 3 sides instead of just 2.

Oh, and check out what MIL is wearing! 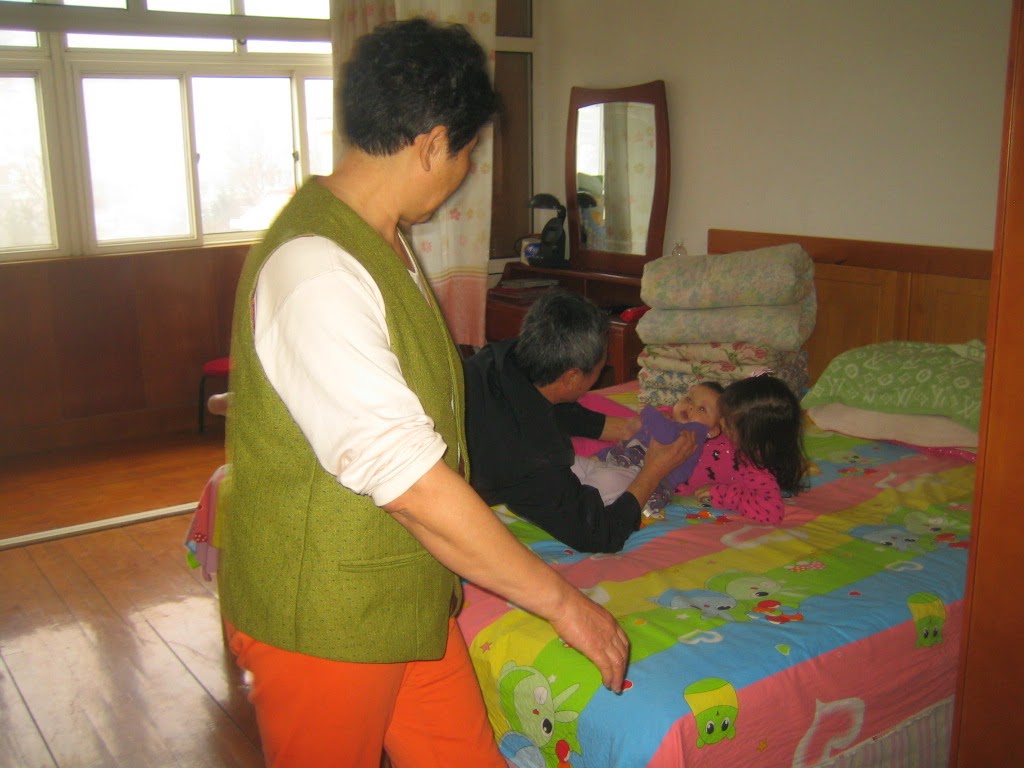 She assembles the ugliest outfits ever. That green vest and those orange pants look like they were hurled into a vortex from the 1970s and somehow landed here in China. Gah! 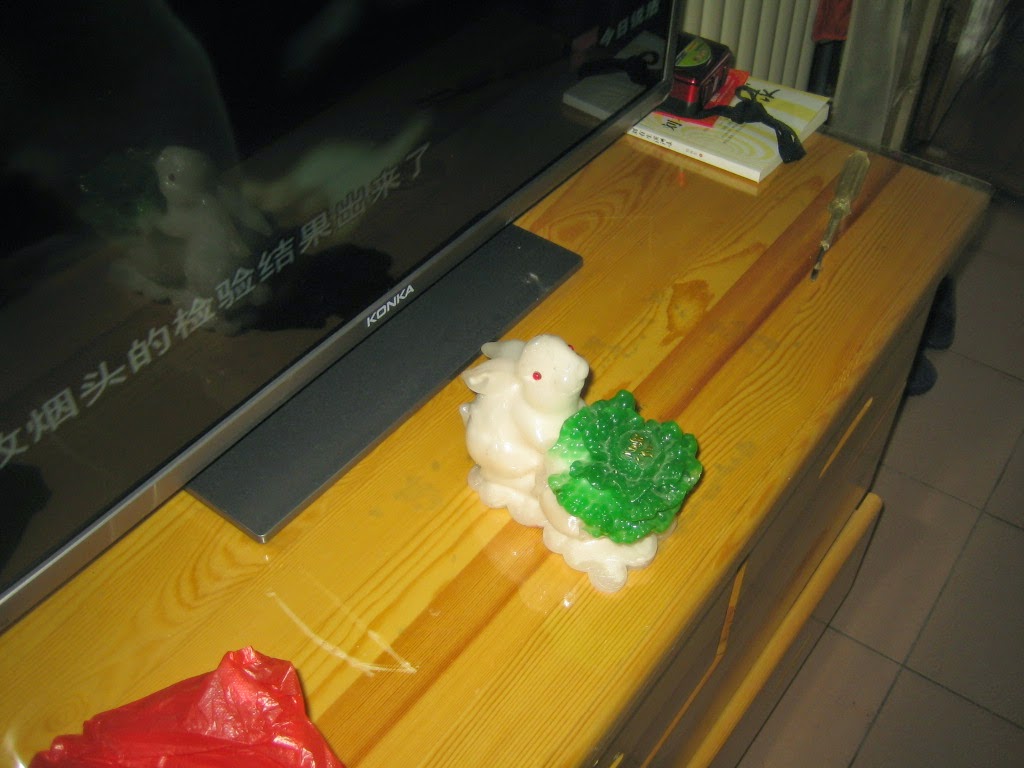 Say, this looks familiar! At first, I thought it was the one they gave us. I thought they realized that we didn't like it when I'd casually moved it into our entertainment center shelf way in the back where it can't be seen. But I checked when we came home and ours is still there. So this is their very own evil bunny rabbit! I should just make hideous things like this and sell them here. I'd make millions because people here seem to buy the most atrocious of things...like that bed sheet that causes hallucinations from the other photos I just posted! 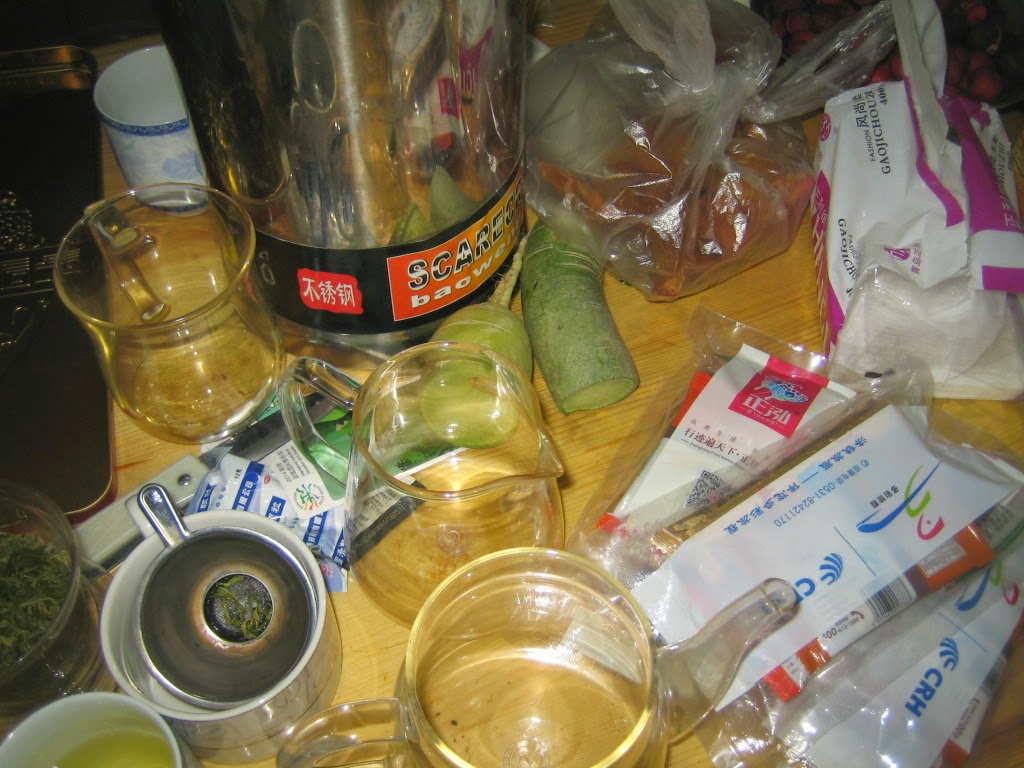 This is their table. Yes, they eat off of here and supposedly just ate before we came over. And now here is where we must eat. God. I can't even. And see the luo bo?!? Why do they cut up so many of them and strew them around?!? At least they do it in their own home too but it makes me insane that my in-laws and my own husband too will cut up several different luo bo and leave them around. JUST CUT UP ONE AND EAT IT ALL FIRST! GAH!!!!!!!! 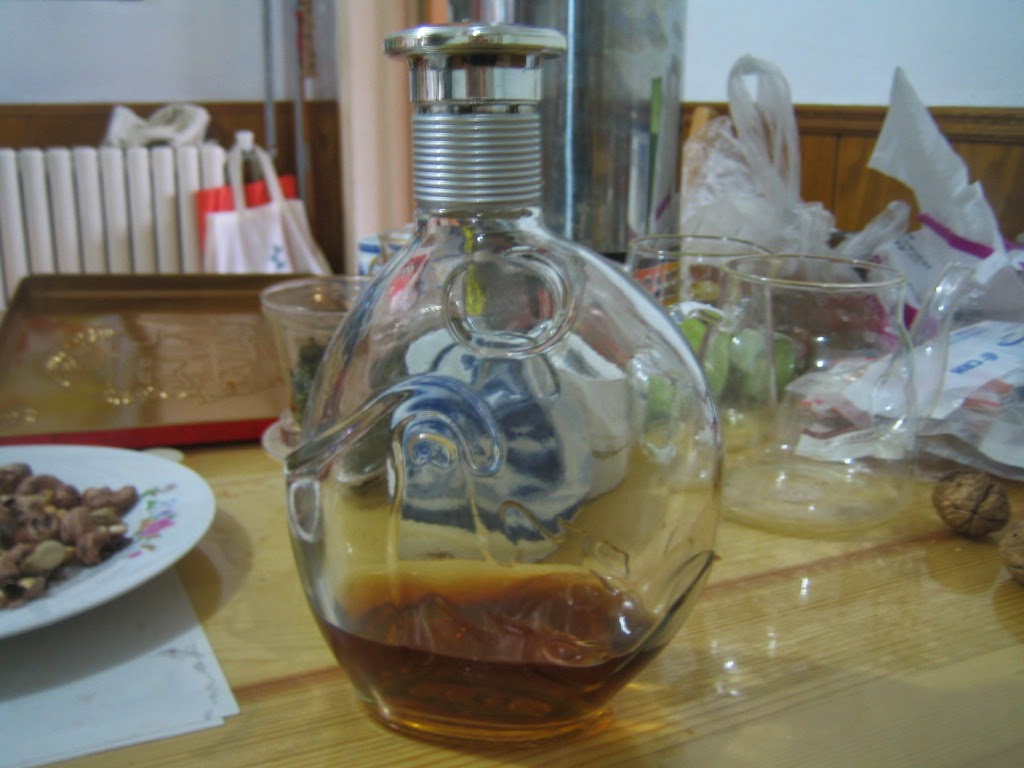 FIL gave me this to try. It's some kind of Chinese alcohol. I expected it to be gross. It wasn't too bad though and it took the edge off, making it much easier to tolerate them and their house of mess. The funniest part was I offered to pour him some and he tells me that he's already had some. I was sincerely not at all surprised as I'd already suspected that to be the case. Of course he'd already had some! Sigh. Well, at least he doesn't smoke so there's that. 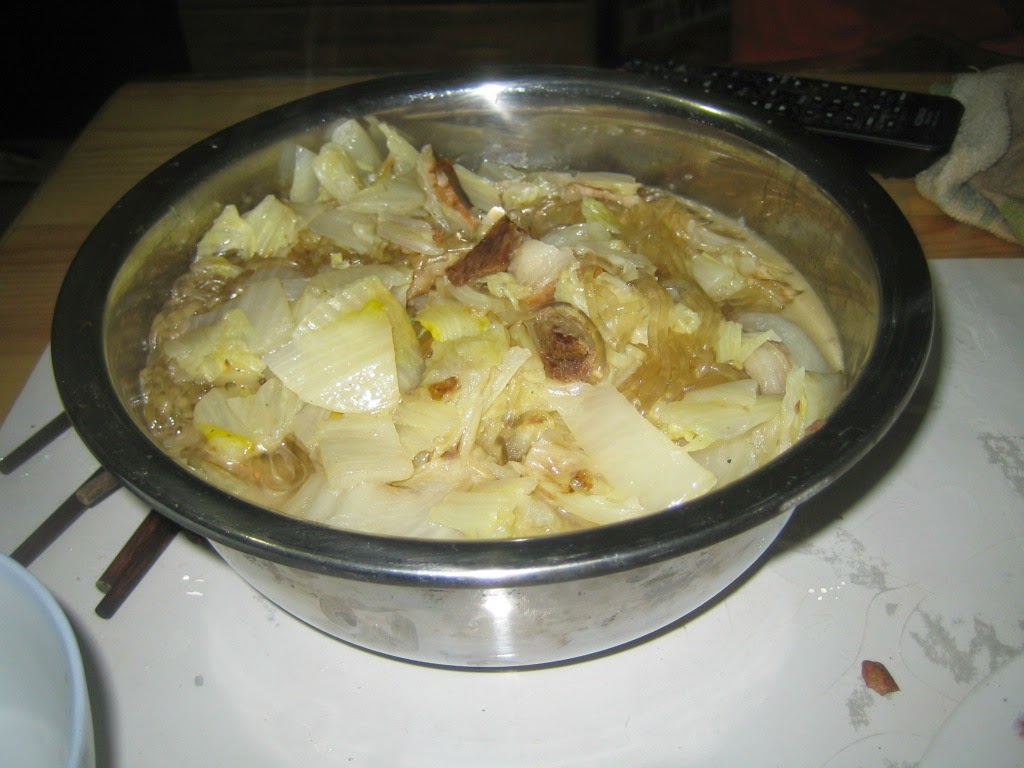 And now for the food! She plops this mess in front of us...some cellophane noodles, cabbage and unidentifiable meat. Oh good. I grimace. I don't want to eat this. My husband deftly grabs a few pinches of this with his chopsticks and drops it like a bird turding onto a car right onto my rice. Ugh. It wasn't as nasty as I was expecting but in no way can I call this good. 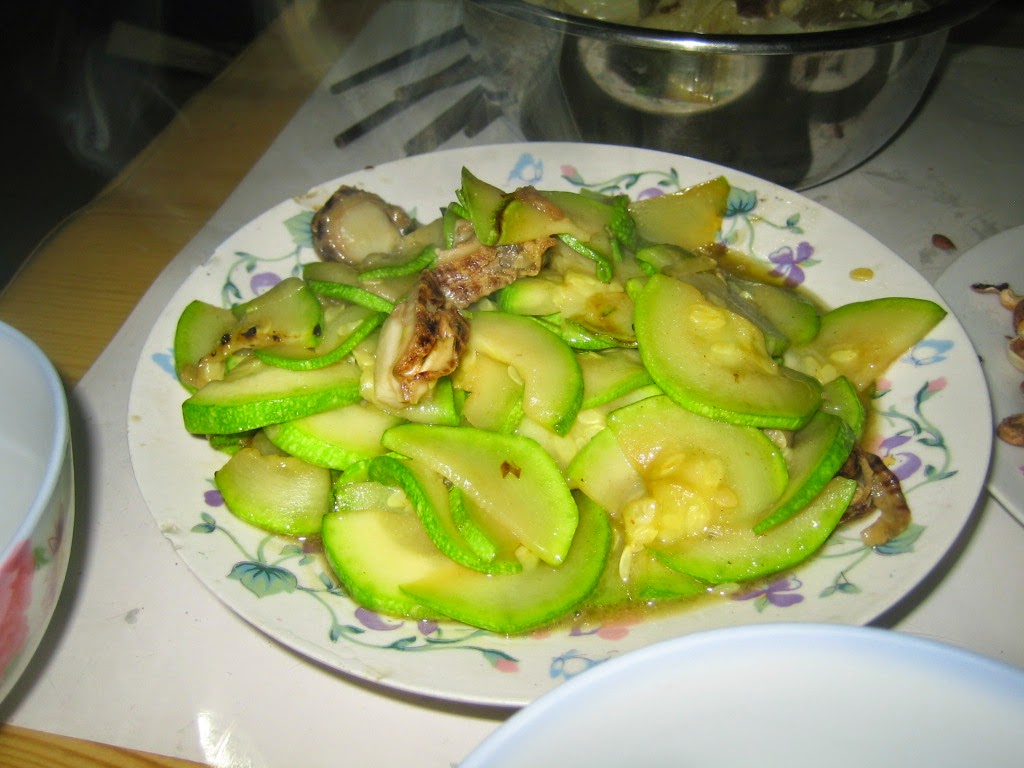 Zucchini and some sort of clam or scallop shellfish creature. This one wasn't bad. I simply feared for my stomach regarding the seafood. Had she stored it and cleaned it  properly? Well, if not, I would get another meal at the Shangri-La. 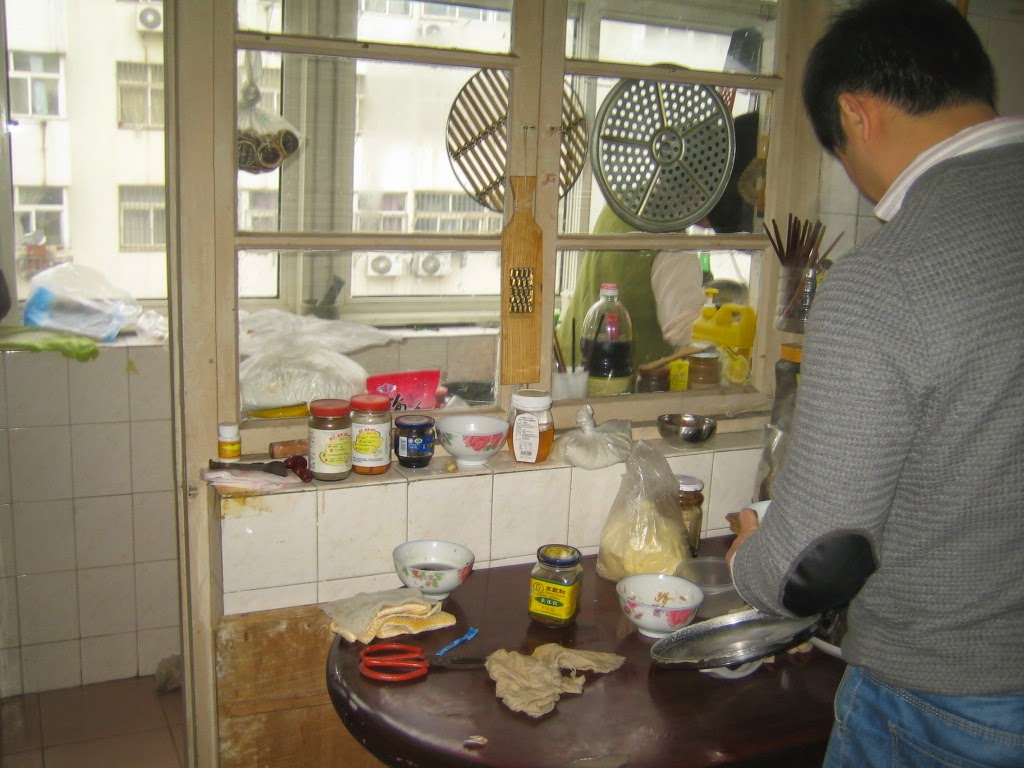 OMG...MIL cleaned her kitchen! What? This is clean, for her. 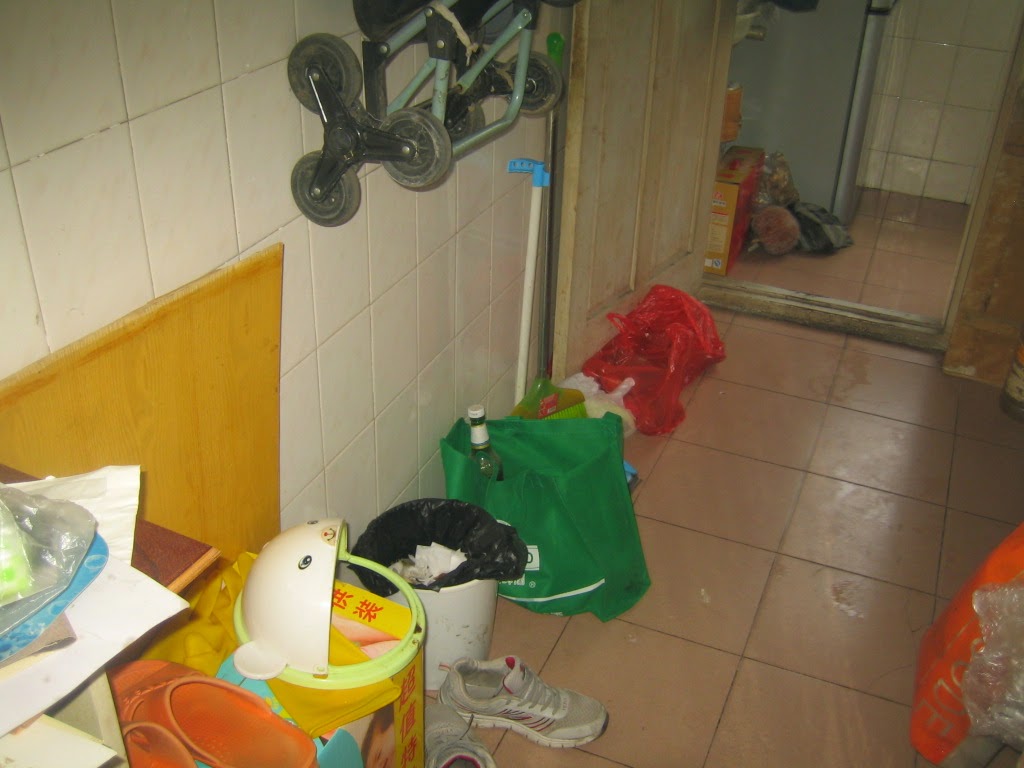 This is the floor along the kitchen wall by the way. Helppppp... 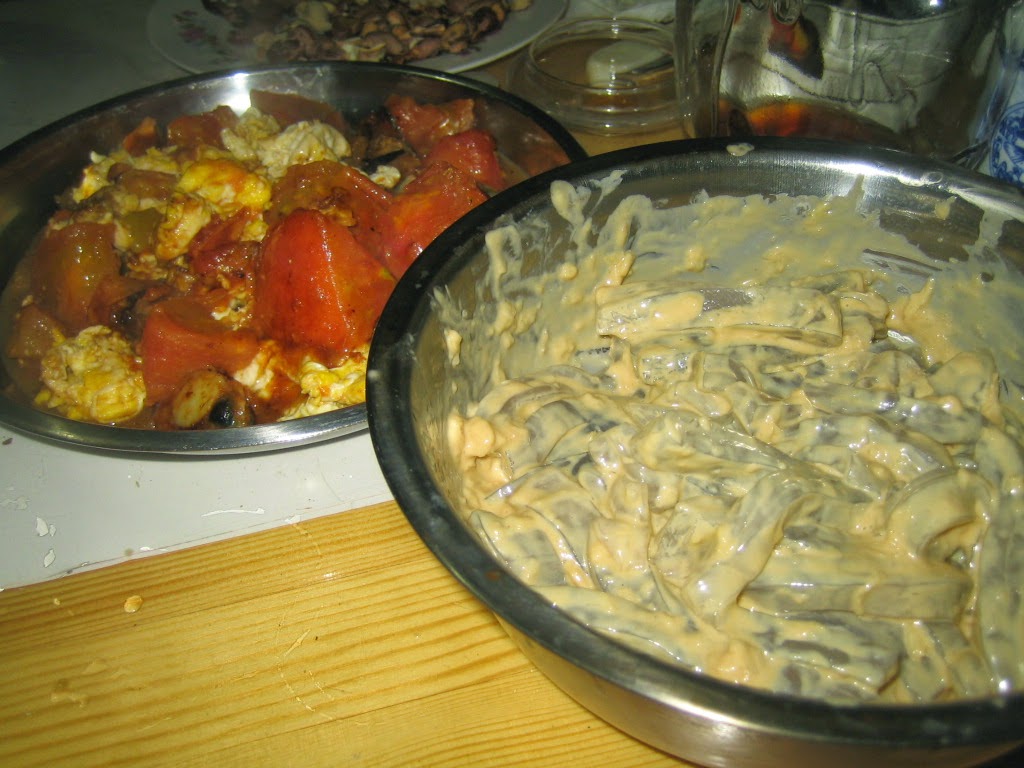 And now for some tomato, egg and shellfish. And slop! Ha! The slop is actually a primitive la pi dish. La pi is potato noodles in a garlicky, peanut-flavored sauce. It is very good. It's just very unattractive. Perhaps she's practicing for the big CNY meal because Jeremy asked her to make it for that occasion but to formally be la pi, it needs some vegetables tossed in there. The tomato and egg thing is just a typical dish Chinese people serve here. It's not a bad dish. But she has made it better than she did on this day. When I got my hair done, she made it then and that night, she made it awesome. 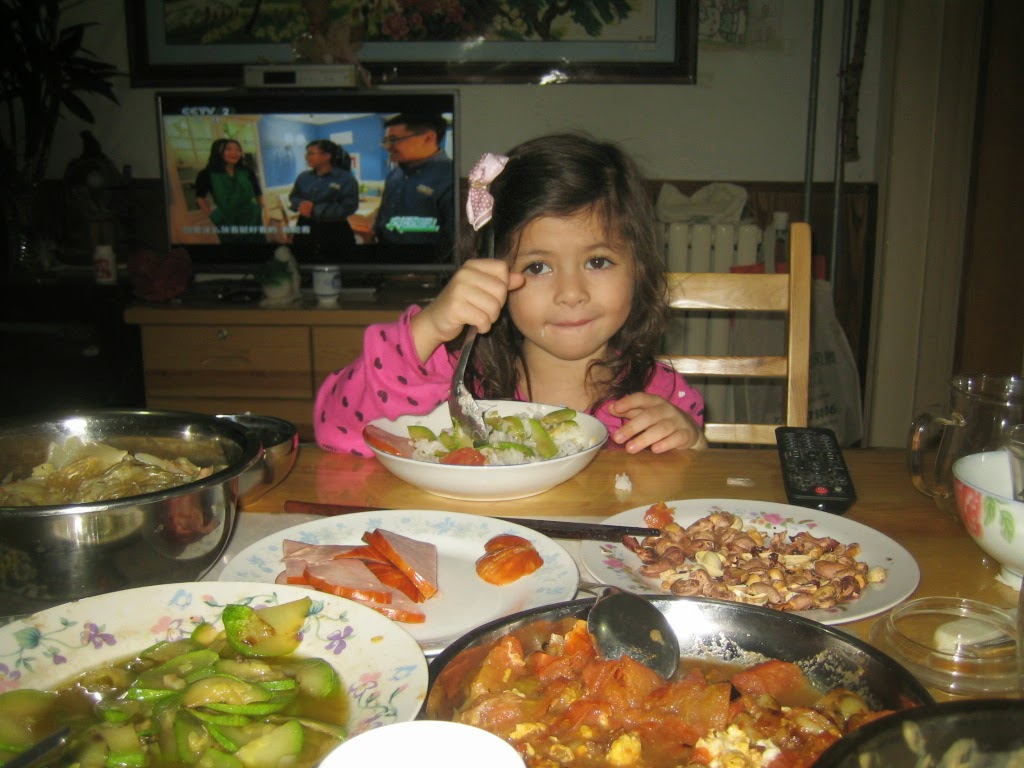 MIL also busted out a plate of that Western-style ham. Raelynn is happy. She likes this stuff. Most of the time, she eats whatever MIL serves her. You'd think maybe the kid has no idea what good food is but she really raves about Jeremy's cooking and mine too. As long as she's eating all kinds of food, I guess that's what matters.

Anyway, stay tuned for my big Chinese New Year post in the next few days. I will be documenting the whole holiday for your amusement.
Posted by JQ at 11:44 PM

Email ThisBlogThis!Share to TwitterShare to FacebookShare to Pinterest
Labels: Annoying In-Laws, Fucking Luo Bo, Kitchen Katastrophe, Someone Made Me Eat This, Yuck