Can You Feel The Love Tonight?

So, it's Valentine's Day. I should be ecstatic that my husband has made us reservations at the Shangri-La for the 3rd year in a row. I should be. But he's made our reservations for tomorrow, which is technically STILL Valentine's Day in the US, for part of the day at least. Why would he do that? Well, it's more practical and economical. Because if we go TONIGHT, then we have to pay quite a bit more than we will tomorrow. EVERYWHERE in this city, and presumably in this world, is overpriced on Valentine's Day.

I'm not upset by this. Some women would give their husbands the cold shoulder over something so tedious. We'll be enjoying our evening tomorrow. With our little Valentine too. You probably think we're insane to take her along but she's come with us the last 2 years and well, we love the kid. On our anniversary though, she stays home.

What I AM upset by is that this happens to be some small little Chinese holiday called the Lantern Festival. It's tradition to consume these glutenous rice balls that are filled with either a sweet sesame paste or a peanut butter-like filling. God, I just read that sentence over and thought, "Ewwww," but seriously, these things are quite tasty. I'm not upset that I had to eat the little rice balls either, incidentally. 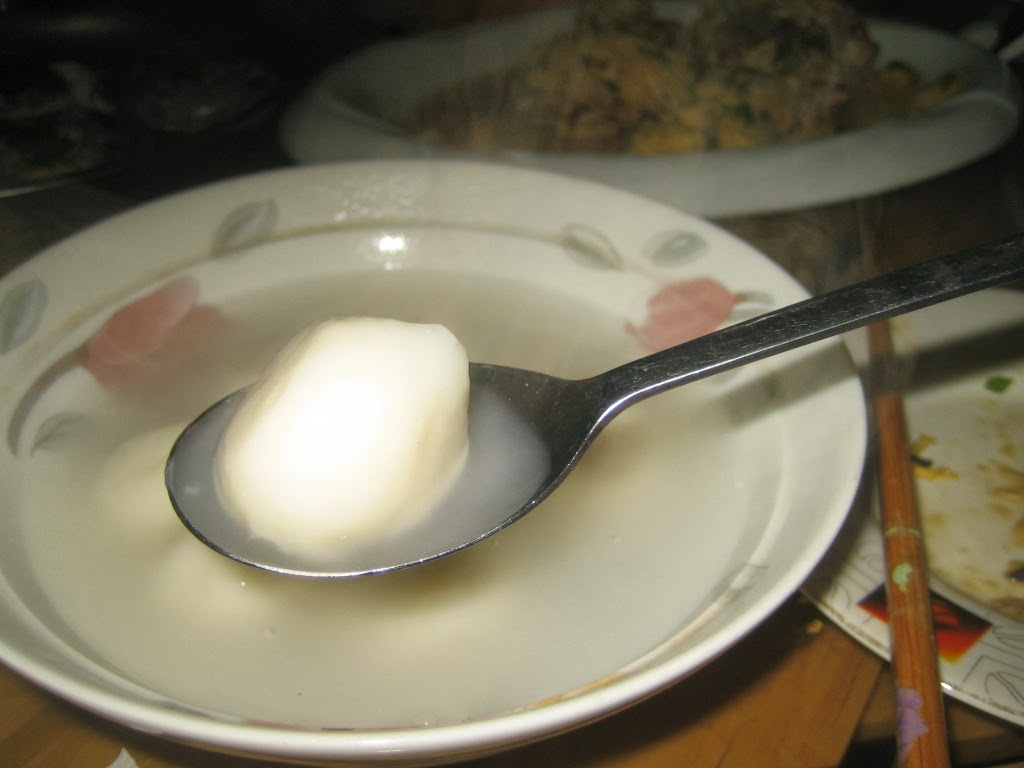 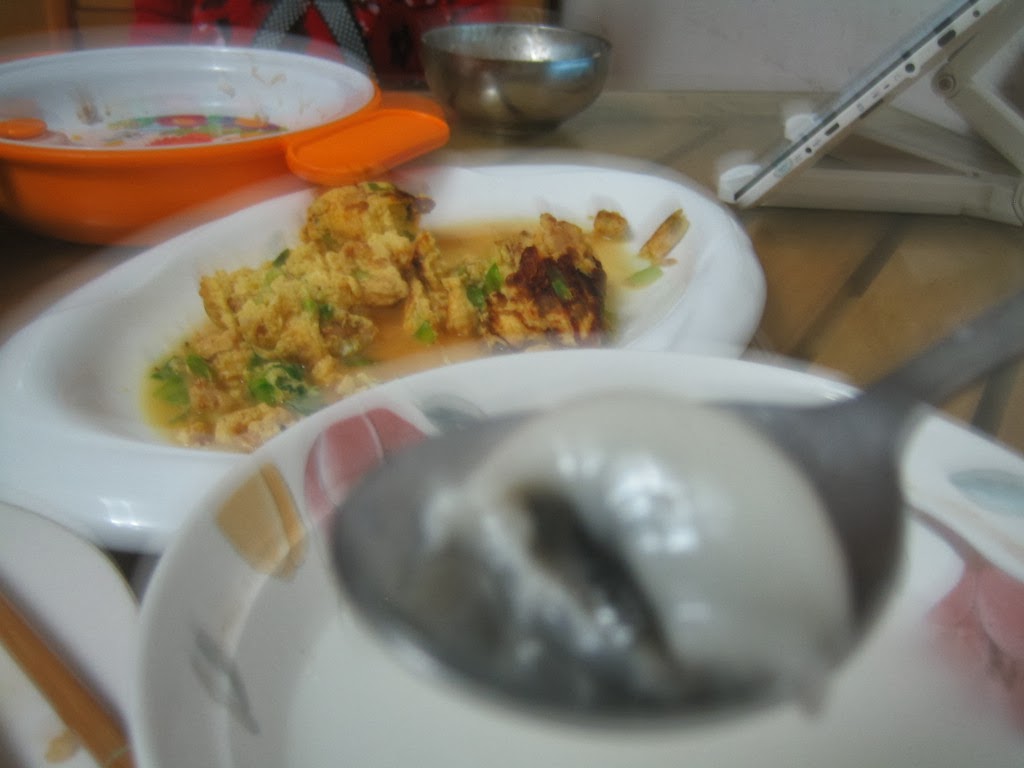 And here, I've bitten it in half to show you the filling. This one is the black sesame filled rice ball.

It's WHO I had to eat them with.

No, no, MIL is still sick. So that means it's just FIL. I didn't want Valentine's Day to be tarnished with bad Chinese food and bad Chinese cable TV. I do kind of feel bad for FIL that his wife is ill and that we'll just be celebrating with him. But still! 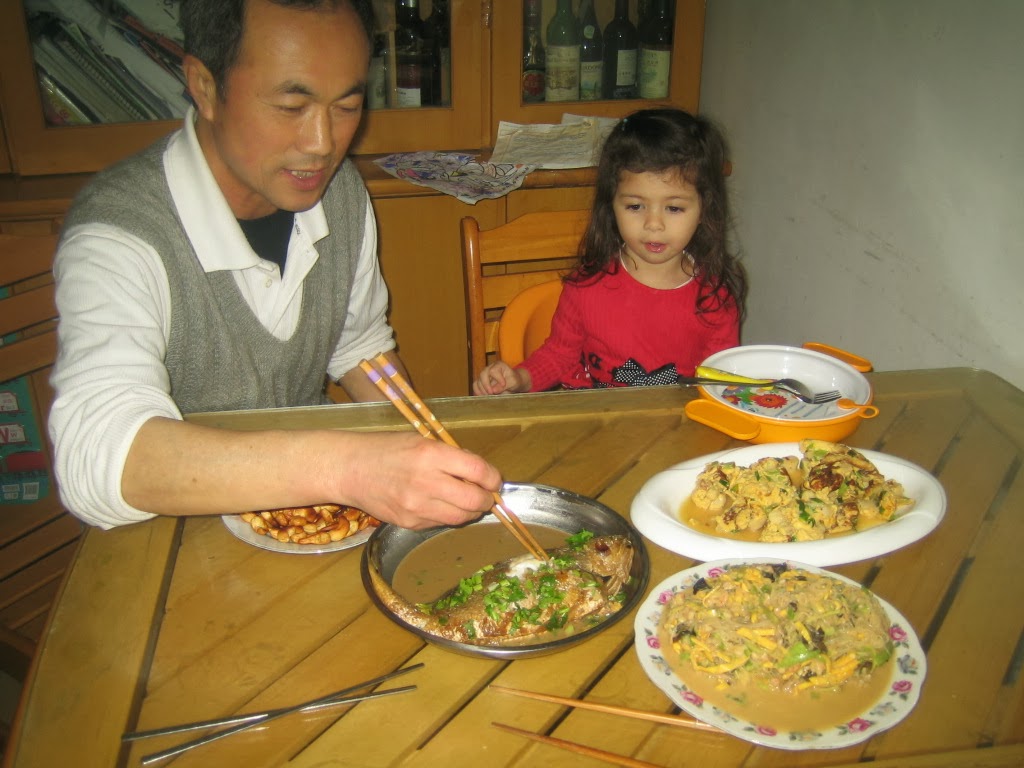 FIL brought over some food that we pray has not been contaminated with whatever illness MIL has come down with.

Jeremy will probably turn a deep shade of crimson when I tell you we were being quite affectionate. We stayed home, making a romantic meal together. We were giggly and groping like teenagers. We were just about to enjoy our sweet little dinner. And then the phone rang.

It was MIL. During this time, my in-laws were renting out the house that they currently live in now, the one that is just a 10-minute walk from our home. Instead, they were living at their house out by Laoshan Mountain (this house), which would take them about an hour and a half by bus to get here. Buses here end their run times very early. I think the latest bus in the city stops at 10pm, though they might have changed it since then. But this bus to Laoshan? The last bus into Qingdao departed at 6:30pm. And FIL was on it, MIL explained, coming to stay with us for the night because he had some meeting to attend for the factory he once worked for early the next morning. I am totally not even kidding.

I heard Jeremy trying to protest but at the time, my Chinese was horrible (and my husband will tell you that he STILL deems my Chinese just as poor but that's another story) and I didn't understand what was being said. He hangs up the phone and looks annoyed and apologetic all at once. And then he tells me. I screamed so loudly, I was shocked that our windows didn't shatter. While the younger generations of Chinese people go all out on Valentine's Day, people in my in-laws' generation do not. They don't even give birthday gifts or have birthday parties (just a simple dinner of noodles works for them). So it's no wonder they were oblivious. I could forgive that. But what I could NOT forgive was them assuming they could just stay over here whenever they felt like it.

This was before we'd fixed up Raelynn's room and made my in-laws take out their piles of extra clothes they'd shoved haphazardly into the closet along with all kinds of odds and ends, and the twin bed. I know MIL had been counting on us to leave that damn bed in there so she could stay with us and the baby and constantly be invading our space. But soon after this particular Valentine's Day, my husband gave me the best gift of all - he made them remove all of these items, especially that extra bed. And ever since, they've never been able to just impose on us like FIL did that one night.

What had angered me was that no one thought to call us beforehand and ask us if this was okay. But now that I know much more about Chinese culture, I know that no one would ask us this. The older  generation sees nothing wrong with this sort of behavior. We're family so I should just be able to show up and stay whenever I feel like it. Oh hell to the no.

As for this evening, just having my FIL around was pretty chill. And he didn't overstay his welcome. After 2 hours, he went back to his home.

By the way, you know what sucks about this Lantern Festival? All the idiots are letting off fireworks. AGAIN. God, China. Give it a fucking rest!

Here's hoping our lovely dinner goes well without tantrums or any wackiness. I'll leave you with this darling photo of Raelynn eating some rice balls. She kept calling them "snowballs." Awwww! She's just so darn cute! 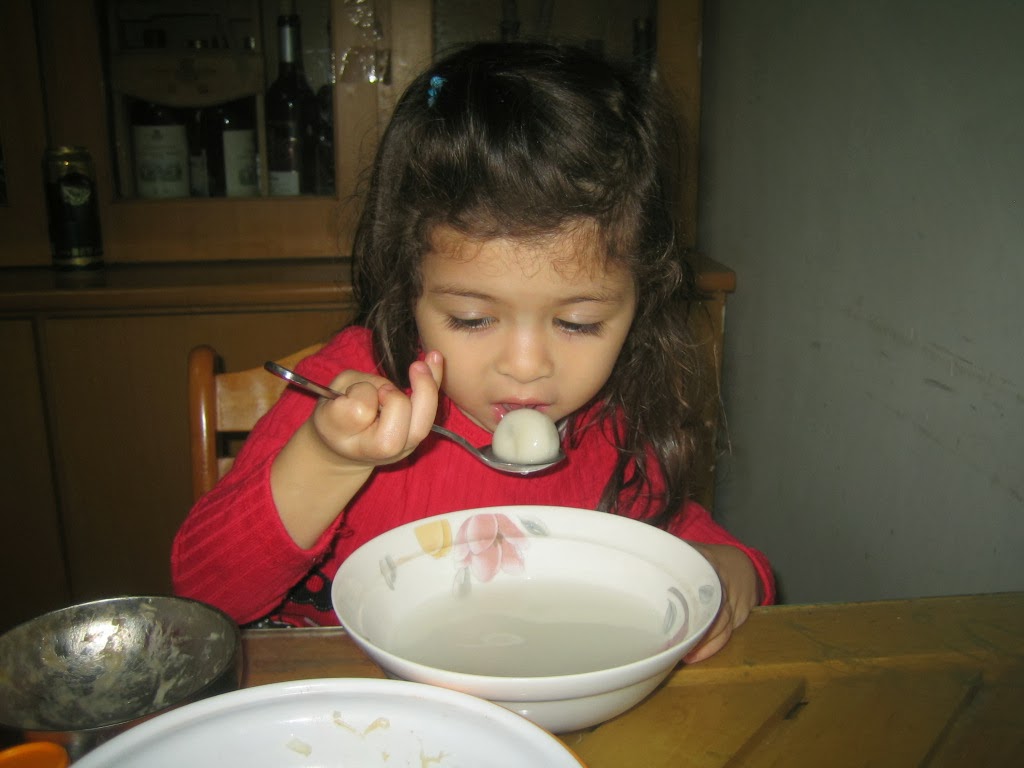