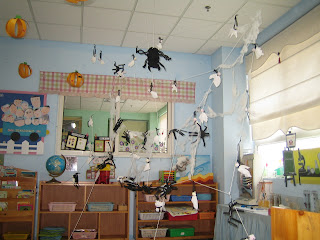 Maybe the not-so-itsy bitsy spider just thought this was a nice place to live with the big spider web and other spiders hanging out here and all. Sorry I smashed you to bits. Well, not really.

Happy Halloween to everyone back home! Here, Halloween is coming to an end. Last week, we celebrated at the school by giving the children a truly unforgettable Halloween party. We would have done so today but were told that the school is used as a church for some Korean families on Saturdays (yes, they do their church services on Saturdays) and the concern was that the children in the church group would tamper with our decorations. Not wanting to come in on Sunday to set everything up, we decided to hold it last Friday.

For 2 weeks, we had all been preparing all our activities and decorating everything in sight. My Korean assistant had made a giant spider web in our classroom. She hung a large spider in the center and I told the kids it liked to eat children that spoke too much Korean. That worked rather well actually. Anyway, we were to have 2 craft projects last week that were Halloweeny in nature. I had them make little ghosts and then we made our own spiders.

Ironically, on the day that I had planned to do our spider-making craft, some of the boys were gathered around by one of the bookcases. I told them to go sit down and write the word of the day. "But Teacherrrrrrrr," whined Ryan, who is always tattling, "there's a spider!" I look all over but I don't see a spider, or anything for that matter. I shoo them back to their seats and class proceeds as normal.

Perhaps 10 minutes go by and then suddenly, I see it. An absolutely enormous fucking spider crawls across the classroom floor. The girls see it and scream, bolting for the door. The boys see it and scream, and then crowd closer to get a better look. I scream while arming myself with bug spray and try to drown it in poisons, while corralling the children out of the way. It creeps under a large piece of furniture on the opposite side of the room and I'm forced to wait for it to emerge again. It doesn't take long. It skulks out of its hiding spot to a chorus of more shrieks. I spray it full-on and it curls up into a ball and presumably dies. All is well in the classroom again. The girls come sit down and as I'm about to continue speaking, the boys begin yelling. I look and see that this horrible creature just won't die and I scream too.

By this time, Christine, the Korean teacher, who has been setting up some Halloween stuff down the hall, has heard all the commotion and has come to see what on earth is happening. She tries to calm the girls down while I, having run out of bug spray, trade up for a broom. I clobber the massive monster to death with the broom while the boys all cheer. The girls have to be coaxed back into the room and it takes some more time to get the children focused again but alas, the spider is dead. It made for a good lead-in to our craft. I told them that the big spider in our web was lonely and it just couldn't wait for us to make it some friends, so it invited one of its own.
Posted by JQ at 2:05 AM