A Whole Bunch Of Drips 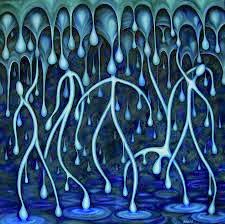 My day was filled with all things drippy. From drippy kids to drippy ceilings to drippy in-laws. Ugh.

That chihuahua kid today spent the better part of 10 minutes trying to hang his windbreaker on the coat rack. It was snack time and Christina was watching them for a moment while I ran to the bathroom. When I returned, she was standing over him quite crossly. He had apparently failed to put his windbreaker up properly. And so he continued to disappoint her while he incompetently attempted to rectify the situation. The other children watched with great amusement as they munched their snacks, as mystified as us teachers that after nearly 4 months in this class, he still couldn't use a hanger. Drip.

When I came home, after FIL carried one sleeping Raelynn into the house and left her to finish her nap on the sofa, I walked into the kitchen to get some water. That's when I noticed a giant puddle on the floor. Not like when the pipes broke and flooded the kitchen, thankfully, but it looked like someone had spilled a very large beer all over the floor. Immediately, I thought my husband must have spilled something all over the floor on his way out and didn't have time to clean it up. How hard is it to mop up a spill? I wonder to myself as I snatch the mop up and restore some order to our floor.

I left the kitchen for a moment and returned to get my water and that's when I heard a "plip" sound. I looked all around and something compelled me to look up. Those idiots upstairs and their infinite remodeling that they promised would be done weeks ago (it's not - they keep doing random things intermittently here and there) somehow caused something to leak from our ceiling.

MIL showed up a short while later and I told her about the leak. She asked me to call my husband. Um, can YOU just go up there and tell them it's leaking? You are Chinese after all, right? You can speak to them about the problem, can't you? Why should we wait until Jeremy comes home? We should tell these people now that whatever it is they are doing to their unit is now seeping down from our kitchen ceiling. Drip. Drip.

So off she went to tell the upstairs idiots. A moment later, she returns with one of them who pokes his head into the kitchen and looks up. Oh, he muses. Drip. Drip. Drip.

It's still dripping, by the way, but at a very slow pace.

And speaking of drips, there is my FIL, who, when he came to help me get sleeping Raelynn off the school bus, removed one of his 2 shirts (need I remind you that it is mid-June and he is wearing 2 shirts!!!!!) and draped it over her as he carried her down the street. I dressed her in a light-weight long-sleeve shirt today because this morning it was cool and breezy, thanks to some rain, but by afternoon, the sun was shining and it was pretty warm. She did not need another garment covering her. I kept telling him "mei shi" which basically means "don't worry about this" but he ignored me. I hate him for this. I fear leaving Raelynn with him when we're in the hospital with the baby. Drip. Drip. Drip. Drip.

But that's not all FIL did to piss me off. He goes for a walk in the evenings and MIL calls him to tell him there's food. He's been avoiding hanging out here ever since he and Jeremy argued about when Raelynn last got sick. FIL blamed us for it because he's a fuckhead. So don't come over and play with your grandchild. Moron. Well, today he actually decides to come up for dinner. At 7:30pm. When I'm trying to get Raelynn into the tub for a bath. And now she doesn't want to comply because look! Here's Grandpa in all his glory finally coming over to hang out. During her bedtime. Thanks asshole. Drip. Drip. Drip. Drip. Drip.
Posted by JQ at 6:55 AM