Why oh why can't I have a normal MIL? One who likes shopping, I mean for things besides fruits and vegetables. One who likes to go out to lunch instead of cook the same foul-stenchy, over-salted items day in and day out. And one who uses her fucking brain to have rational thoughts. No, I just HAD TO fall in love with the handsome Chinese man I met while crossing the street. But I don't regret that at all. Just thinking about him makes me giddy. Thinking about his mother however makes me want to smash everything I see to bits.

I try, I really do, but no matter how hard I do, I cannot wrap my head around how she can't use simple logic to comprehend things. I'll have you know that Jeremy explains these things carefully to her in Chinese but it goes in one ear, out the other and then shimmies down her two scary, long, silver chin hairs never to be seen again.

What has she done today to incur my wrath? Well, I came home from work a little earlier which caught her by surprise. We were supposed to have a meeting with the other teachers but it was canceled. Raelynn starts screeching for me and I'm hurrying my best to rescue her from the troll's clutches. I kick off my boots and hang my coat. I stash the milk I've pumped while at work in the refrigerator. And off I go into the bathroom to wash my hands. When I come out, MIL is trying to change Raelynn's diaper by holding her around the midsection in one arm and trying to slap the diaper on with the other. I give her a strange look and resist the urge to call her all the really horribly profane Chinese words that I've learned (much to my husband's chagrin). Instead, I tell her as politely as possible "bu yao, qing bu yao," which means "don't do that, please don't do that" and I take Raelynn AND the diaper mat from the changing bag (which she knows exists, incidentally) and change her in the crib. Now I know WHY I come home to a baby with sometimes wonky diapers. I just don't know what possesses her to be such an utter imbecile.

But the icing on the cake by far is the potential choking hazard she's given to our daughter. These barrettes: 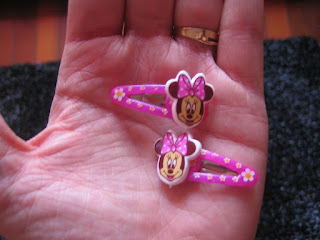 I have to applaud her for at least picking out something cute. I do like these barrettes. It sure beats all the other ugly shit she's ever picked out for Raelynn (to refresh your memory, click here, here, here and here). But even if you have just half a brain, you can see from this photo that these barrettes are very small. Which means that Raelynn could swallow them and become ill or even worse, choke to death. It makes me sick to think of either of those things happening to my daughter. At first MIL had only brought just one of these chokey barrettes over. I have to admit I thought she looked as adorable as ever when I first came home and saw her with it in her hair. As her hair is growing, it's really hard to keep it out of her face. I liked the idea of putting something in her hair to keep it out of her eyes. But when I saw how small the barrette was, I worried. And with good reason. While playing with Raelynn, she yanked that sucker out of her hair and took aim for her mouth.

I explained this all to Jeremy and he agreed we shouldn't use the small barrette until she's big enough to understand not to try eating it. Then, he told his mother how we liked the barrette but that it was too dangerous for Raelynn. She had insisted she'd watch Raelynn when she put it in her hair, but the next day when I came home, Raelynn was in her crib napping and guess what was in her hair! The barrette! One thing I've learned from being a mom is that your baby will be asleep one minute and the next you'll hear odd sounds coming from your baby monitor to find she's trying to eat the crib or standing or playing with the tabs on her diaper. So I don't doubt for a second this kid wouldn't try to eat that barrette if she woke up and found it in her hair. After that, I stuck the barrette in our room with my make-up and jewelry. I knew the troll wouldn't go through my things if she wanted to walk down the stairs (as opposed to being kicked down them of course). I also asked Jeremy to speak to his mother again and tell her not to put the barrette in her hair. I suggested that she could pick out something else that is much larger without stuff on it that Raelynn could pick off and eat. I guess this fell on deaf (or in this case, dumb) ears though because when I came home today, there was the barrette in her hair! I thought she'd taken it out of our bedroom but it turns out it is the matching one (hence why you see 2 identical barrettes in the photo). I don't know if she just brought one over at a time or what. Or if there are more! Now I have hidden this one too. I fear that she'll bring yet another one tomorrow. And the day after that. Stupid, dumb, idiot, moron!
Posted by JQ at 7:39 AM