One Drip And No Drops 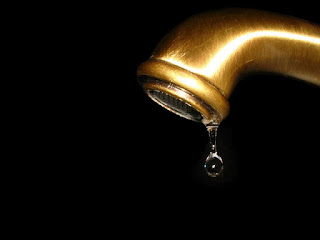 One day late last week, I'd come home from work and, as I do when I get home each day, I swooped up my my overly adorable daughter into my arms. I smiled and thanked MIL and she went on her way, which is out of my way, thankfully. I was so wrapped up with Raelynn that I initially didn't notice what MIL had done on this day.

I was busy feeding my daughter. And playing with her. And changing one stinky diaper. I didn't even have a moment to get a cup of water. So when I realized how thirsty I was, I put her down and went to the kitchen to get a drink. The electric kettle was full of water so I just poured from there. I drank quite a bit and when I went to refill the electric kettle to boil more water for my drink du jour (water with a slice of lemon as lemon helps your metabolism burn 33% faster), that is when I noticed it. That drip of an MIL of mine drank the rest of the big bottled jug of water! She left nothing! Not a drop!

This is where I go to the land of what the fuck. See, like most places, you don't drink the water here. True, you could boil the tap water and it's fine. But it just doesn't taste so great. Actually, the tap water here tastes way better than that of Shanghai, just so you know. We have a water delivery guy with a store right on our street. All you do when you need water is give him a call and he lugs a giant jug of the stuff up our 6 dusty, cigarette and spit littered flights of stairs. All this for just 8 yuan. A jug lasts us about a week in most cases. Jeremy had taught me how to call the water guy who I'd taken to referring to as "Shui Ren" which I meant as "Water Person" but my husband asked me not to call him that to his face since there is some other meaning (which I've forgotten) which wouldn't be taken as a compliment. Jeremy was busy when I called so I asked him to text me the number. But when I called Shui Ren, it was too late. He wasn't answering. No wonder because now it was almost 7pm.

What pisses me off is that MIL didn't do anything about it. And Jeremy called her out on that one. I listened to his side of the conversation while I sat in the playpen with Raelynn, hoping to hear him call her "shagua" (Chinese for "stupid") but he didn't. In the end, he softened up about it which I just couldn't understand. He relayed to me that his mother said she didn't know Shui Ren's phone number. "OK, well what about YOUR phone number then? Why didn't she call you?" I ask. "She doesn't know my number either." I should stop right here to tell you all that this is probably the only human (of the troll variety) left on the planet that does not have a cell phone.

THAT is what pissed me off the most. She doesn't know her own son's phone number?!? I made Jeremy write it nice and big on our dry-erase board. What kind of idiot doesn't know the number of her own son, let alone have it written out somewhere in case of an emergency?!? What's even more stupid is that we have a land line (which we never use) and she could have called her husband (he has a cell phone) because she knows that number and asked him for their son's number. But no. No, no, no. See, my free babysitter is a completely drippy, brainless blunderer. It would have required the mouse with broken legs that lives in her head to flop its' broken ass onto the wheel and turn it into a rational thought. But on the bright side, she put all the food back into the refrigerator, unlike last time. So, two steps forward, two steps back, kick yourself in the head and poke your eyes out and you officially have the MIL dance.
Posted by JQ at 2:26 AM