I Left My Heart In Seoul 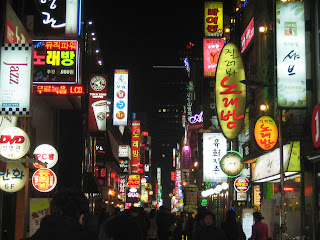 When I first visited Seoul, I absolutely fell in love with it. Everything about it made me feel alive again. It was so big, yet so small. The culture was fascinating. And everything was so modern. During my first stay, we did typical tourist things, like tour the palaces and museums. We ate traditional Korean meals. And less traditional meals at the fanciest of restaurants. We went shopping. We drank A LOT. We had a wonderful time. 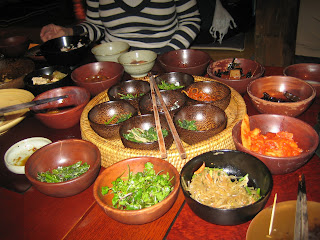 To save our parents some money, my brother had me stay with him in his fantastic apartment on the 37th floor of the Brownstone building.  It gave us siblings a chance to spend more time together plus, I got a chance to meet more of my brother’s friends, which further solidified my decision to move there permanently.

It was during this trip I met my husband, though at the time I didn’t know it. When I met my husband, I had already made my decision to move to Seoul. On December 26, 2009, Phillip, Mom, Dad and I happily bounced along the snowy sidewalks near my brother’s apartment. We’d just seen the play Nanta which we’d all really enjoyed. Maybe I should thank Dad for wanting to walk to Phillip’s apartment rather than take a taxi. Because as we waited to cross the intersection, I looked over and saw an incredibly handsome Asian man waiting to cross the street with us. I smiled at him, and he smiled back at me. Boy was he cute! I looked away briefly but when I turned back, the handsome man was still smiling at me. My mom then teased, “Oooh, I think someone likes you!” And still, he smiled. The light changed and we were now able to cross. The handsome man began to speak to me.  And we walked across the street together while my family scrambled ahead to leave us be.

Two things about him I noticed right away were what a great smile he had and how sweet his demeanor was. His English wasn’t the best but at least he spoke it enough and understood me when I spoke. But soon, my family got very far ahead and I had to catch up to them. Not before I’d told my new friend that I’d be moving to Seoul quite soon. He asked for my email address and I jotted it down with icy fingers. As I ran off to my family, I turned and blew him a kiss.

My decision to move to Seoul had been final in my mind before this. Despite there was something about this handsome stranger, who I learned was a foreigner like me, having left his home of China behind to go to graduate school, I had no idea at the time I would marry him. For the moment, I was happy that I’d made a new friend.

Once back in America, after starting the process of cleaning up my mess in Miami and moving in with my parents a bit north in Stuart, I finally checked my email. And after hours of cleaning out hundreds of new messages, I found one from an address I didn’t know. It was the adorable Chinese man I’d met in Seoul. And thus, we began corresponding every single day. Toward the end of my time in Florida, our emails became a bit flirty. And when I saw him again, I knew that we were so much more than friends. And that I was so much more in love with just Seoul. I was in love with him.

Over the next few months, I busily applied for teaching positions. And Xiaolong and I moved in together. My brother had to change jobs and soon became even busier getting ready to move to Singapore with his wonderful girlfriend.  Soon, I was taking the subway like an old pro. I was learning the language. I was making more and more friends and I was loving my life. I discovered that I loved teaching English more than I’d ever loved doing anything work-wise. I was finally happy about my life again.

After nearly 6 months working at my job, my schedule changed with the new semester and I suddenly felt exhausted all the time despite I didn’t really teach many hours. Soon after, we discovered we were pregnant. And with that, waiting to marry seemed silly, and Xiaolong and I went to the US Embassy in Seoul just days later to get married. That was on September 8, 2010. We were so happy. We had it all. But something had to give. And it was our ability to keep living in Seoul. We had to leave the place we both loved most on this earth behind. 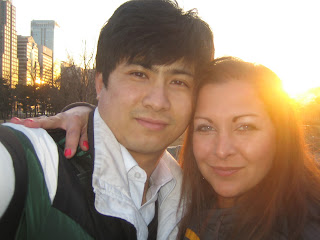 In November 2010, Xiaolong and I moved to his hometown of Qingdao in China. We brought everything we could with us. Except a piece of our hearts, which will always be right there just across the Yellow Sea in Seoul.
Posted by JQ at 10:56 PM