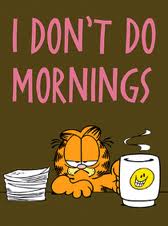 Good ol' Garfield. I can always count on him to be my company in the hatred of mornings.

Ever since the school decided that for this semester, even kindergarten teachers had to start the day at 7:30am, Jeremy has taken it upon himself to ensure I have a good breakfast each morning. With his new job, he has to be at work at 8:30am, so he has plenty of time to get ready himself. I have to be out the door at 7am so I hugely appreciate having a husband who makes me healthy and delicious breakfasts every morning. We sit together and enjoy some time as a family before we have to hustle out to our jobs. It's a great way to start the day. It's always so nice and peaceful.

That is unless a certain troll-faced woman comes over earlier than she is supposed to and crashes our breakfast. During the last 2 weeks, Jeremy has had to take the remaining parts of his driving test and on 2 separate days, he had to leave before me. For those days specifically, he'd asked his mother to be here earlier so that I could leave for work on time.

If you know me well, then you know how much I despise mornings. Truly I do. My mom is a total morning person, up at dawn and smiling away. Not me. Though after having Raelynn, I learned to function somewhat during them. For me, mornings need to be kept simple. And since I'm rushing off to work during 5 of them a week, I just want to see the faces of the two people I love. What I DON'T want to see is MIL in her mismatched wardrobe of dirty rags with her lopsided man-style haircut, ever-growing chin hairs and rat-like false teeth barging through the door. But on those mornings where my husband had to leave first, I had no choice but to endure her voice of 1,000 chickens being slaughtered so early in the morning.

Jeremy had told her that she only needed to come earlier on those 2 days. After his first extra early day, she showed up while I was still eating breakfast. Jeremy and I were talking and Raelynn was sitting on his lap, babbling away as if to be contributing to the conversation. I nearly hit the roof. It's bad enough having to see her at any time of day. But to see her on a morning when my coffee has yet to kick in and when there is no fucking reason for her to be in my home at that time pisses me right off. How dare she! She gets to spend all this time with my daughter who will, God-willing, never ever be as dense as her grandmother. She is such a manipulative cow. Seriously. I work my fucking ass off and this bitch is trying to steal one of the few precious moments we have together as a family. I hope and pray we can find someone who isn't a complete asshat to watch the baby sometime. I'm not saying Raelynn shouldn't know her grandma (though for her sake and my husband's, I sure wish I could trade her in) but I just wish she didn't have to spend so much time with that witless wonder.

After MIL did it again today, I openly let it be known that I did not want her trolling around my house right then. I scowl at her and I clank my silverware loudly. Then she goes to pick up Raelynn and that's when I really thought about inquiring to see if I could find a rocket bound for the center of the sun that I could buy her a ticket to ride on.

Jeremy promises it won't happen again as he said he's spoken to her once more about this problem. It's funny. I never thought I could ever hate anything more than mornings. Until she came along. Here's hoping I can enjoy my eggs and baby snuggles tomorrow morning without having them ruined with the sight of that yeti.
Posted by JQ at 6:25 AM