I'm Not Deaf...I'm Just Ignoring You

Back when I was an angst-filled teenager, I had one of those snarky door hangers. Instead of "do not disturb," it said, "I'm not deaf...I'm just ignoring you." Apparently, they must have such a sentiment in Chinese because dear ol' MIL yet again has purposely disregarded my wishes. And the wishes of her own son!

Remember the barrettes she bought for Raelynn? They posed a major danger to my daughter should she attempt to eat or swallow them whole. Jeremy was also alarmed by this and had spoken to his mother about it. He told her to never put anything small like that in her hair, no matter how cute, because Raelynn could easily take it out and try to gobble it up. She told him he shouldn't worry because she was watching Raelynn the whole time. Bitch, please. I'd come home from work and Raelynn was napping. MIL went on her clueless way and when Raelynn awoke, I discovered another barrette in there! I'll have you know MIL wasn't sitting in Raelynn's room watching her as she slept. Which is kind of good because that's just fucking creepy. But it's also scary for the fact that this woman blatantly ignored our wishes and put Raelynn in danger.

And she did it AGAIN. Yes, even after my husband told her not to. Even after he told her that if she bought really large hair clips, we would love to use those instead. THIS is what I find in my daughter's hair when she woke up from her nap yesterday: 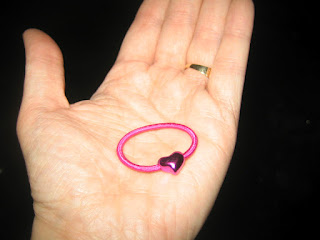 Last night, when Jeremy returned home, I showed him this as calmly as I possibly could. And I watched the terror and anger combine on his face. And then, he promised me he would make sure she never pulls this shit again. I secretly wondered if that meant he would finally ship her off to a glue factory somewhere. I know she's not a horse, but she's certainly acted like a horse's ass enough times that surely they wouldn't notice if a troll got shuffled into the mix. Oh but of course I'm not that lucky.

All this makes it quite difficult for me to try not to hate her. But in moments like this, I can't mask my rage. I mean what the fuck?!? Jeremy and I are Raelynn's parents. Not her. What we decide is best for our daughter should be respected, plain and simple. Especially when it comes to keeping our baby out of harm's way. Perhaps my husband survived in her care as an infant because boys don't wear barrettes. He's lucky to be alive after enduring years of her cooking and improper food storage techniques, not to mention listening to her screeching howl of a voice all the while. Somehow, he's managed to turn out to be a bright and incredible person. One who doesn't need to be told how dangerous small items can be for babies. That's how I know that whatever he said to her today must have done the trick because she was noticeably different. Like she'd had the shit smacked into her with words. Good. She deserves much worse than that. Now I'm not sure who's worse: this horribly inept and unkempt troll or the crazy bitch from the library.
Posted by JQ at 5:18 AM