It wasn't enough for my in-laws to annoy and agitate my very last nerve on New Year's Day when my husband forced me to go with him to their home to celebrate FIL's birthday. Oh no. Because they had even more torture planned for us! Who knew?!

Lane and I had spent my first official weekday of vacation (and my last day before starting my diet so I can blast away this last blob of baby weight before the next semester) by going out for REAL pizza with lots of cheese and no corn on top. The waitress even asked my husband if I was sure this was the type of pizza I wanted. I gave her the "bitch, please" side eye. It's MY pizza. The restaurant you work for SERVES a scrumptious cheese pizza. It is on the menu like that for a reason. BECAUSE FOREIGNERS LIKE ME LIKE OUR PIZZA LIKE THAT! We even ordered a chocolate lava cake for dessert which was just heavenly. It seemed a fitting way to bid adieu to foods that will only keep me at the same plateau of weight I've been hanging out on for a couple months now.

How to top that? Let's see...by petting a random dog in the park that looks EXACTLY like the family dog, Tasha (or, as my parents refer to her, my sister) and then hitting up an amazing furniture and home goods market. Seriously, this place was bliss. Lane and I played around picking out things we wish we had room for and discussing how, if we had a larger home and were starting to decorate from scratch, we would adorn it. Our mission was to get a medium-sized area rug for in front of the couch (we got rid of the crappy red rug with the line drawn on it) and we were quite successful with that. We even found a new wicker laundry basket.

We also found something else we didn't expect. Or even want. My in-laws decided they wanted to play another round of let's-over-pay-for-something-ridiculous-and-continue-to-use-sub-par-bathroom-facilities-in-our-own-home-and-complain-about-the-cost-of-that-instead. And for this round, they bought some clothing for Raelynn. Oh poor Raelynn! You remember what kind of garments MIL picks out, don't you? Click here to refresh your memory.

The next thing I know, Lane agrees to let them come over for just a few minutes to give Raelynn whatever tacky-ass crap they've picked out. Manipulative assholes. Of course he's not going to kick them out after just a few minutes. And of course that demented trollitard of a woman is now snatching Raelynn from my arms as though she belongs to her. I make a sour face and my husband shoots me a nasty look. I have to bite my tongue or further upset Lane. So I dig my nails into my own flesh and paste one of those big, fake smiles on my face that I keep stashed in a bag of pretend just for when I have to deal with these two clowns and I watch to see what kind of junk they claim to have spent all day and lots of money shopping for.

They bought three things. Of those three things, I didn't mind one item: a pink ski cap. She needed a new winter hat since it seems that overnight, she outgrew her old one. It doesn't exactly match her coat but it is cute on her and keeps her little head and face warm. But as is typical with my in-laws, one step forward, 10 steps back. Exhibit #637: the miniature grandma sweater. Check it out: 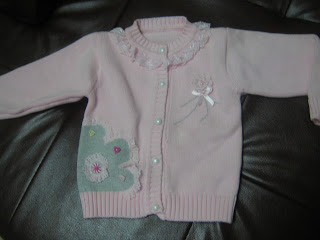 Here it is sans flash and below is with flash. 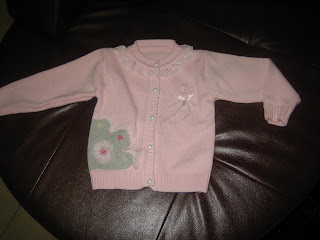 Let's pretend for just a moment that it is indeed the 1950s. Keeping that in mind, THIS IS FOR A BABY! Good Lord! What is wrong with this woman? Must she try to make everything around her as dated and lame-looking as she is? My friend, Frances, came over today and I can tell you she's a much nicer person than I. And even she had to say this sweater was absolutely dreadful. I showed Frances where I shove hideous garments that MIL brings for the baby. I do hope it swirls off into some vortex of its' very own and materializes in some alternate universe where it could be woven together to make tents or something. As long as it isn't on my beautiful daughter when I get home. Ah, but this is too recent a purchase. I am going to have to put Raelynn in this ghastly thing at least once before she outgrows it, or ideally, when MIL forgets all about it.

But even worse than that, Frances and I agreed, by far was this pair of red shoes: 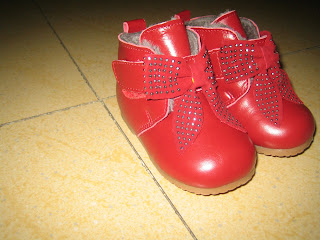 With flash, above, and below without. 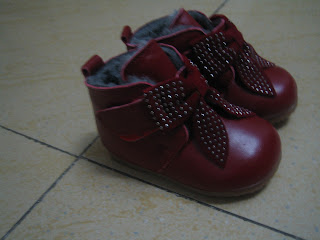 My brother will likely take this opportunity to point out that I once had red Reebok high-tops. Which I loved. IT WAS THE 1980s! I was a tween, which back then, we weren't called "tweens." No. We were called pre-teens which sounds decidedly so much uncooler. Anyway, back then and at my age, my red Reebok high-tops were the shit.

But these...these are SO not cool. On first glance, I thought she'd discovered Ronald McDonald's long-lost baby shoes. Upon closer inspection though, I can tell you they look just like a mini version of something MIL would wear herself. She probably thinks these match that stupid fucking sweater too. They look tacky and cheap, the same as everything she buys that she wants to show off with. Frances said they reminded her of the special kind of shoes you would wear if you had one leg shorter than the other. She hit the nail right on the head with that one. Yes, what troubles me most about these is that they look like some odd orthopedic shoes. And they are hard-soled which she doesn't even need BECAUSE SHE CAN'T WALK YET. They are also a little big but that is something I will not fault her for since she'll grow into them quite quickly. And I pray she grows out of them even more quickly because I am embarrassed to be seen in public with a baby wearing THESE HIDEOUSLY FUCKING UGLY OCTOGENARIAN-STYLE SHOES!

At least Lane promised that we'd only put these awful things on Raelynn when we go to his parents' house. And those visits are relegated to once a week for dinner, when it is dark out and no one can see how unsightly these shoes are at least. Shoe shopping for tasteful footwear like cute black shoes or little baby boots for Raelynn has now become a high priority for my husband and me. While we might not always see eye to eye on issues with his parents, when we look at these eyesores, we both see red.
Posted by JQ at 5:39 AM