The Importance Of Being Stupid

If ignorance is bliss, then what is stupidity? Well, in Chinese, "stupid" is "shagua." And yes, it happens to be my favorite word. It's just so fun to say. Try it. See? It's SO fun. And now you all back home can go around shouting "shagua" at the stupid people you encounter daily.

As you may have already guessed if you are an avid reader of this blog, I encounter many stupid people around these parts. Lucky for me, my driver enjoys my half-baked Chinese commentary. I don't even think I ever mentioned that I got a new driver, did I? I'm looking back and all I can find is my mention of Xiao Shi and his rickety pickup truck. Well, Xiao Shi and his wife moved away to some backwoods place back in October. So we had to find a new driver. Fortunately, when Jeremy and I had taken Raelynn out one day, we wound up in a taxi driven by a man who lived right in our neighborhood. His name is Hao Shufu and he totally rules. I like practicing my Chinese with him each morning, plus it is also nice having a waiting driver who doesn't drive like the rest of the maniacs here. And on that subject, Jeremy, now that he has his driver's license, wants to buy a car. But I'll have to bitch about that hot mess another time because my head fucking hurts and it exhausts me just thinking about it.

Anyhoodle, today, after some total idiot nearly ran into Hao Shufu's taxi, I'd declared, "Ta shi shagua!" which means "he is stupid." Hao Shufu agrees and then he asks me what the word for "shagua" is in English. Of course, I was delighted to share this with him. "Stupid," I tell him. "Soopid?" he asks. I sound it out for him very slowly, just like I do for my kindergarteners. "Ah! STUPID!" he proudly shouts. And the rest of my ride to school became absolutely hilarious, like watching children after they've ingested sugar for the first time. Everyone was now "stupid," and that was fine by me.

Incidentally, speaking of all things stupid, I'll leave you with this photo of a building we always pass on the drive to school. For months, we had watched this building go up and now it's just about finished. It's nice and all but nothing impressed me more than the sign. Or, should I say "imperssed?" Oh, Qingdao. How hard is to hire someone who can use a spellchecker? 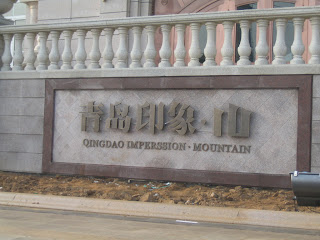