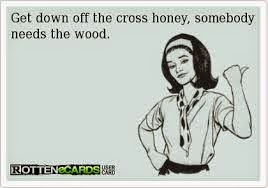 One of my best friends/former co-workers always said this and I think it applies perfectly to MIL. And FIL too.

This morning, I officially had it. And I think my husband has too.

Last night after dinner, while I was busy nursing Seoul and putting her to bed, Jeremy was cleaning up in the kitchen with his mother. As they cleaned, he spoke to her about doing a better job cleaning up and not leaving such a mess. He also asked her to not make so much food and to please use the meats and vegetables we have in our kitchen instead of bringing all of her stuff. It was Thursday night and on Fridays, she doesn't come to cook her barfy slop for us. My husband said he was simply speaking to her and not yelling about this. She brings over all this food we never asked her to bring and he likes to keep his promise to me about us eating my kinds of foods on the weekend.

You'd think in a mixed family like ours, his parents would at least try to eat some Western food or learn some American customs and traditions. But no. It all has to be me trying to fit into their culture. And my husband now sees how terribly unfair it is to me, and our children who are now both US citizens as well. He sees that I'm always the one to make a compromise while his parents push and push and push, crossing over any line of boundaries we ever set.

MIL must be forgetting that if she fucks with us, she won't see her grandkids because she pulled some big bullshit today after my husband had spoken to her about his concerns. Instead of listening to him, you know what she does? She refuses to come up in the morning to get Raelynn for the mountain park and instead, sends FIL. Oh goodie.

That's how I found out about Jeremy's conversation with his mother. Because as I lay there nursing Seoul at about 8:30 this morning, Jeremy comes into our bedroom and sits down in my desk chair with a huff. He looks annoyed and very sad. After 4 years of marriage, I know his faces. All of them. And I hate to see this one.

He doesn't even want to leave for work yet because he doesn't want to speak to his father anymore. Apparently, FIL came in and instantly gave Jeremy a hard time about his talk with his mother. Let me clarify that he TALKED to her. There was no shouting. I would have certainly heard that in our bedroom while I got the baby to go to sleep. Yes, he talked to her about not making so much food, please use our meats and vegetables and to help clean up better and she got upset about THAT. She chooses THAT to flip out about instead of when I shrieked at her the other day.

I told you she's a manipulative cow. She's sulking until she gets her way and my husband now sees it all very clearly. Instead of having the effect she wants it to have, he just can't wait for us to move away. You know, those 2 idiots better be nicer to Jeremy. He doesn't have to take care of them as they age even further. In fact, after this, I hope he lets them rot. I hate when they treat him badly. My husband somehow turned out well despite having them as parents. Perhaps because he spent 10 years of his life living away from them, between going to college in China and traveling around on his soccer team to living in Korea. He always tells me he was so happy during that time because he was away from them. Jeremy is a smart and wonderful person but his parents never see this. Maybe it's the Asian way, but they are constantly pushing him down even when he has success. His insurance job? Oh that's worse than being a beggar, they tell him. They never praise him for the things he's accomplished in his life. And of course, when he has a failure, as all of us do from time to time, they shove that right in his face.

Now my husband feels bad about himself and is sitting in my chair, staring out the window. He needs to get going and start his day but he doesn't want to encounter his father again, who is inexplicably taking his sweet fucking time getting Raelynn off to the park. I tell Jeremy I'll shoo him away. FIL doesn't like to talk to me too much.

When I emerge from our room, I see he's already taken out ALL of her toys and now we've got blocks all over the fucking living room floor like some sort of obstacle course. He knows I hate this so I bet he's done this on purpose. Asshole. I see Raelynn's got her shoes on so I try to focus on getting her excited to leave so he'll follow suit. But he keeps insisting she needs to drink tea. She has a thermos full of water. Give that to her. No, no. He treats me like I'm some horrible mother because I won't give my daughter tea to drink. He then takes forever to make tea and pour it into 2 different metal rice bowls. Because why give her a cup to drink out of like a person? No, let's drink out of bowls like dogs. How Chinese. He then decides she needs to eat another egg. OH. MY. GOD. Just take my kid out to the park and go. We agreed on this arrangement so you could spend time with Raelynn and so that I could have a break in the morning and now I have to clean up after this jackass instead of relax. I'm ready to kill him. Finally, he leaves and Jeremy is happy again. He can leave without having to endure more bullshit from his dad.

I'm seriously sick of these 2 idiots. Some might argue they help us. Yes, they do. But then they jump in and help with things we didn't ask them to help with and then they try to control everything and yell at my husband when he nicely asks them to please stop. It's insane. I would love it if they never came over anymore. Seriously. LOVE IT. Hire a nanny to watch Seoul and take Raelynn to school with me and watch her behavior problems that they caused disappear again. It would be so lovely.

But of course, we're stuck enduring these nimrods for a little while longer at least. Hopefully not too much longer. My husband will forgive this incident but he won't forget it. He's got one foot out the door with me and our 2 beautiful daughters on his arm.
Posted by JQ at 11:33 PM