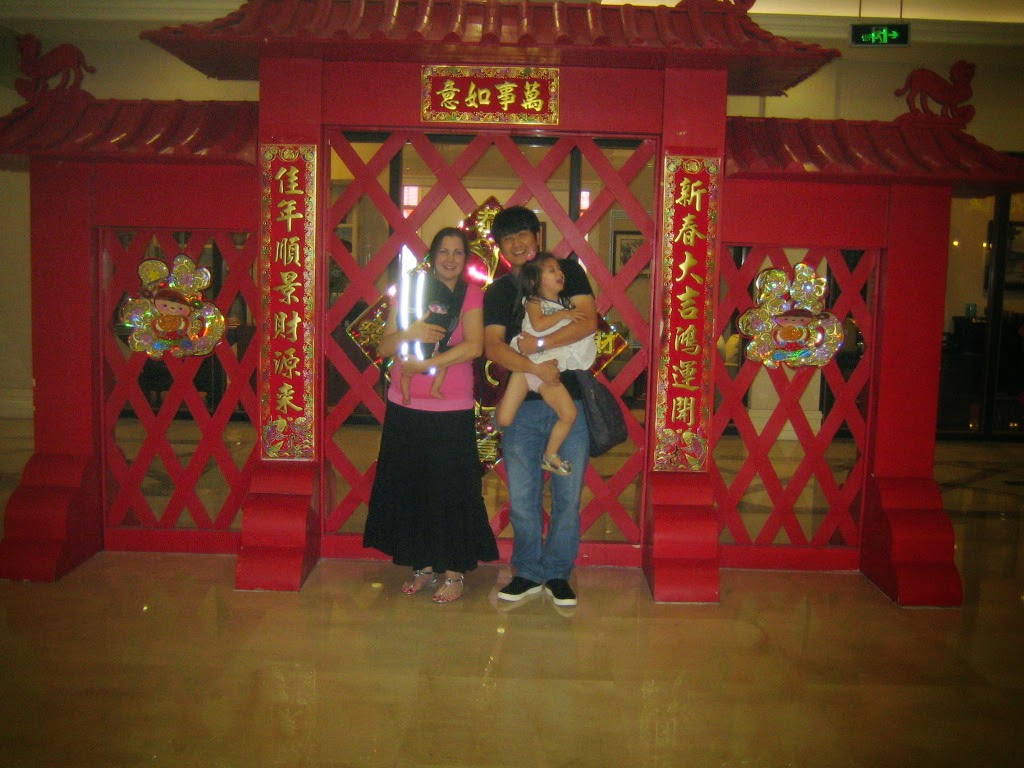 This year, Jeremy and I are celebrating 4 years of marriage. It's really gone by so quickly. It seems like just yesterday, we walked into the US Embassy in Seoul on September 8, 2010 and got married. And now, we suddenly have 2 precious daughters. Wasn't it Ferris Bueller who said, "Life moves pretty fast? If you don't stop and look around once in a while, you could miss it." I just Googled it. I was right. Yeah. It moves pretty fucking fast all right.

Anyway, for our previous anniversaries, Jeremy and I would usually go out sans Raelynn, much like we did last year. But this year, my husband had some bad news for me...the Mid-Autumn Festival holiday, the one with all the mooncakes, fell right smack on top of our anniversary this year. You know what that means, don't you? Because it was a Chinese holiday, it meant we HAD TO spend it with his parents. Sigh. My worst nightmare and there was nothing either of us could do. Stupid harvest moon! Damn you!

So to make it up to me, Jeremy made sure we enjoyed Saturday and Sunday. On Saturday, we uncorked a bottle of wine from Spain that we'd been waiting to drink since the beginning of my pregnancy with Seoul. God, it was good. I also cooked for us, using stuff we'd just bought at the supermarket. We actually went back to Metro, if you can believe it. They've opened it back up to family memberships again. Plus, Jeremy hates going to the Aeon now. We like the Aeon itself just fine but it's a pain in the ass to go on weekends, which is usually when my husband has the time to take us, because the parking garage is for the supermarket AND the adjoining mall. It's a zoo in there and trying to park the car is an ordeal. Metro changed their bathroom too. Did they read my post about their nasty bathroom? Or did enough people complain?

Well, as it turns out, they fixed up the whole store. From the bathroom, which no longer stunk of rotting sewage, to all the aisles of food. They'd even added lights behind the shelving to make the aisles seem less drab. There were also tons more imports to choose from and they already had one of the best import selections here. And they were having sales on EVERYTHING. The cereal we like was only 13 rmb at Metro compared with 22 rmb at Aeon.

As unromantic as it sounds to go to the supermarket, we made it more so by picking out even more nice bottles of wine to enjoy together. And Raelynn gave us the gift of good behavior as she sat in the cart and didn't cause any problems. Seoul, ever the good baby, just slept through the whole shopping adventure.

On Sunday after church, we were trying to decide where to eat for our anniversary. It didn't seem fair for me to pick - it is OUR day, not MY day only like my birthday. So we sat in the car, each suggesting places. Neither one of us was thrilled with anything either of us came up with until we thought about Teppanyaki, an all-you-can-eat Japanese hibachi place that we could actually walk to from where our car was already parked.

We hadn't been in a while...not since my parents had visited the year before last. The food was good but the service was lackluster as usual. One thing that they always do to you there is when you order something, they don't bring it. This happens every single time we go and it's really annoying. Sure, you're paying one amount for an all-inclusive meal (including the alcohol of your choice and as much of it as you want) but it still sucks when you order tempura shrimp and they NEVER bring it no matter how many times you ask about it. They just keep bringing you everything else, hoping you forget about it. Why? I've no earthly clue, especially since they'd bring the peel and eat shrimp faster than you can actually say "peel and eat shrimp."

My parents will come in February and my dad has expressed interest in going there. I'm not sure we can because of the Chinese New Year. It may actually be closed. But I'm also not sure if we SHOULD go as Jeremy got the runs after that. Somehow, I was spared. Maybe because I was drinking all-you-can-drink sake. Jeremy couldn't drink because he drove so I didn't even drink that much so he wouldn't feel left out. Maybe the bit that I did drink helped kill any germs.

Once home, I made a grisly discovery. My computer just randomly decided to lock me out of my desktop. It was fine the night before when I shutdown. I tried and tried to get my computer going but it just wouldn't work. My husband dropped everything to try to fix it. When he couldn't, he called his computer friend who was able to fix it quite quickly and easily the next morning. What a wonderful anniversary present - a husband who will move mountains to help his wife.

On our actual anniversary, we enjoyed the beginning of our day without my husband's parents, but at 3:30pm, they came over. I used it as an opportunity to nap while FIL played with Raelynn and the baby slept soundly. When I awoke, MIL had crabs steamed up for us. No one had to tell me that - I could smell them in our room. Yum! 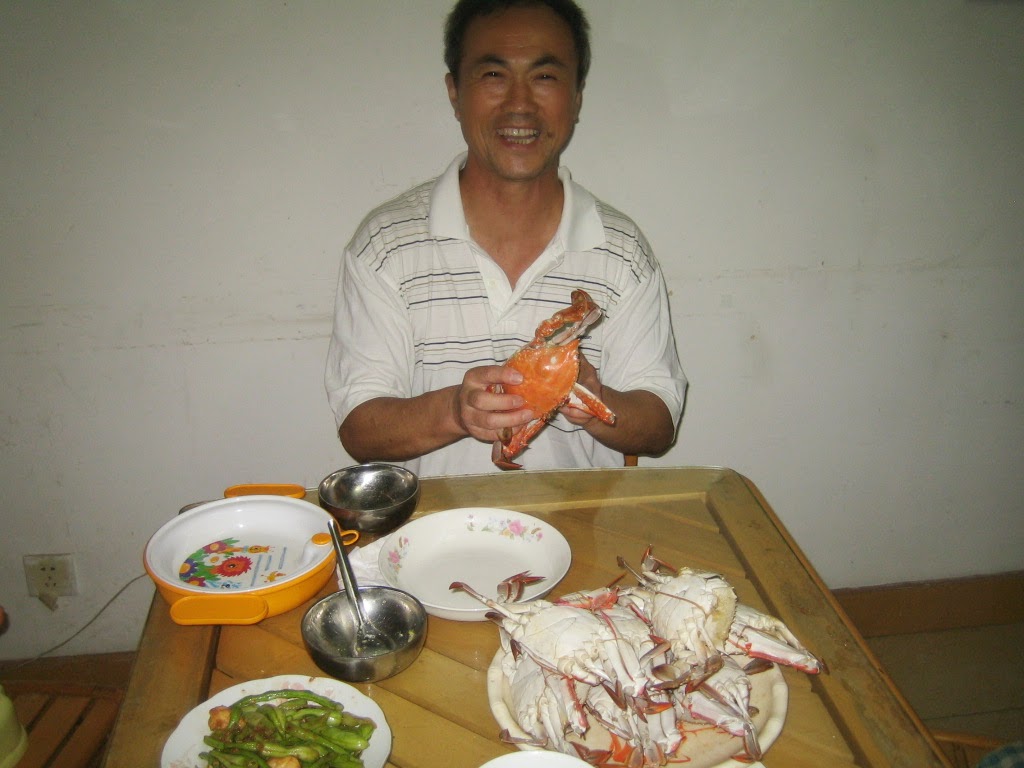 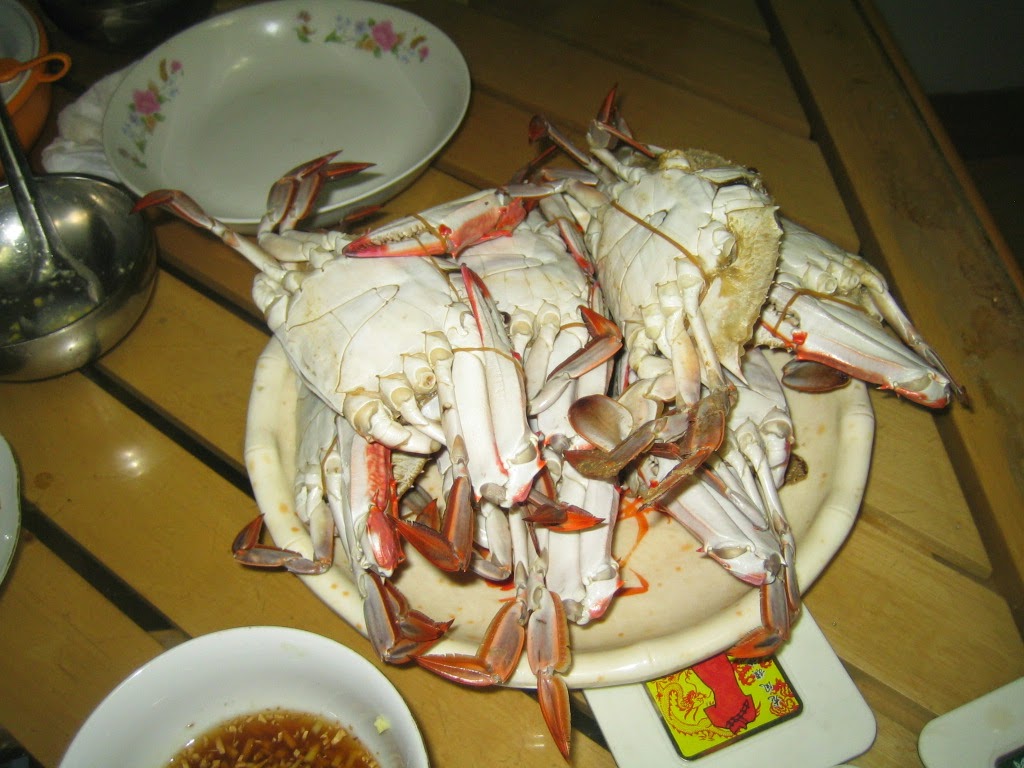 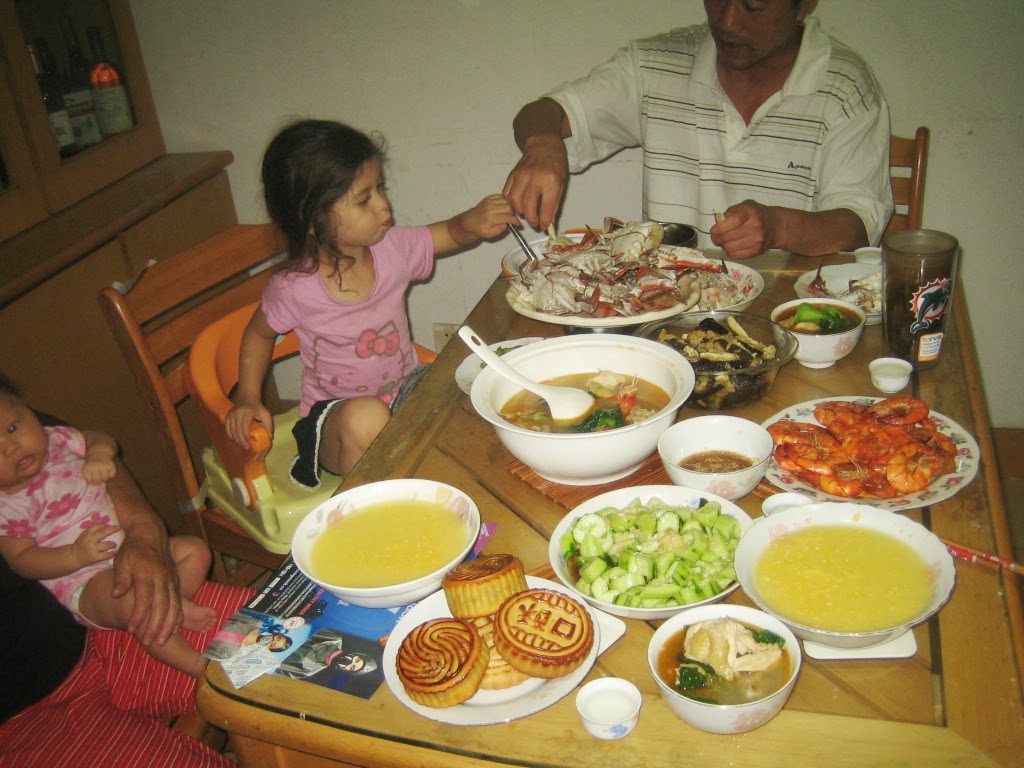 You can also see there's a corn xifan AND a big bowl of soup with scary chicken pieces in it. I swear there is no art to butchering animals for food over here. They chop it into the most unpleasant pieces. Rubbery skin, anyone? She put bok choy and some shrimp in it though so it wasn't too bad but I was so not eating that chicken in there. There's also cucumbers with garlic sauce AND there's a bowl next to the giant soup bowl filled with eggplant with garlic sauce. And of course, you can't celebrate this holiday without mooncakes. There they are at the front of the table. She got the weirdest flavors this year. One was filled with hard spheres of sugar and the other had sunflower seeds in it. So random. Oh yes, and on holidays, you simply MUST imbibe! Of course I didn't need anyone to talk me into it. I was ready to drink. I MUST drink in their company for it makes me want to strangle them much less. Those small cups you see are filled with baijiu. This particular one was very potent. I felt like I could set my breath on fire after drinking it.

And of course, with a Chinese holiday, you simply MUST serve up a side of horrible Chinese music shows. At quick glance, you might think this was Kelly Osbourne. I did for like a teensy second. Love the hair. 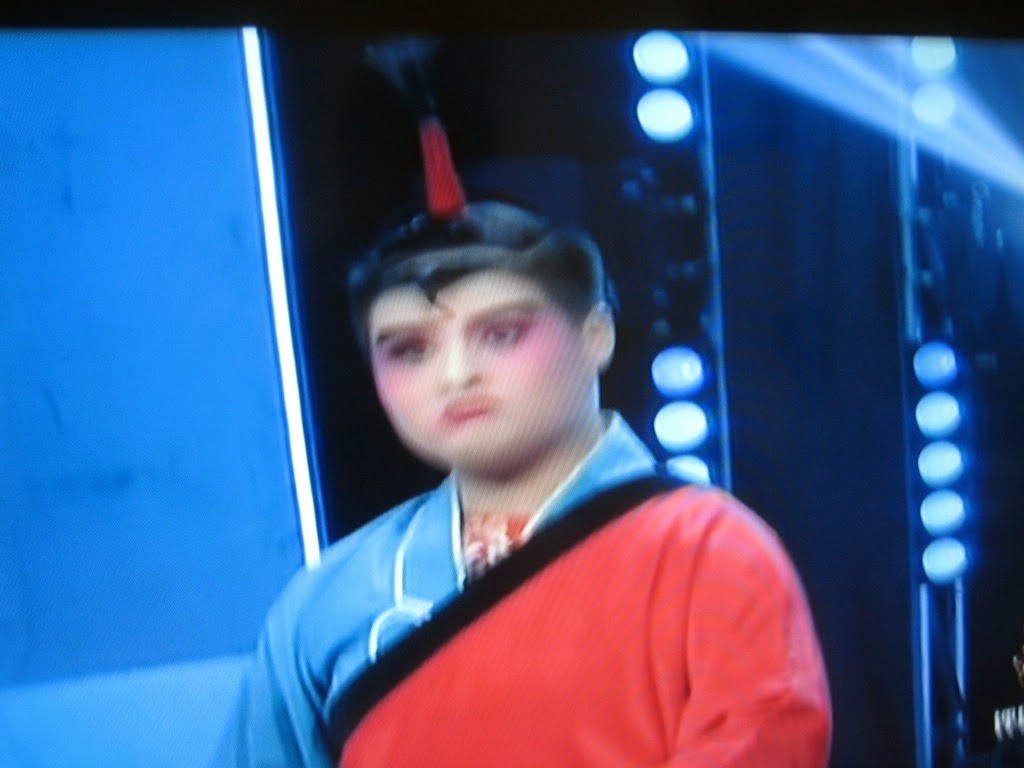 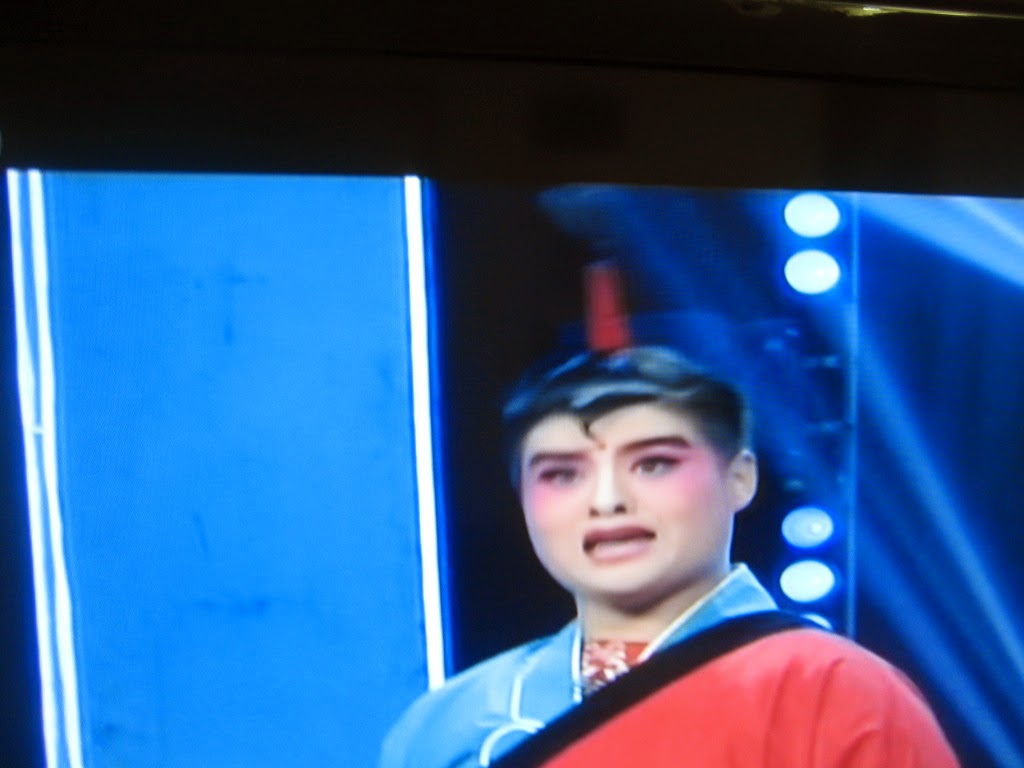 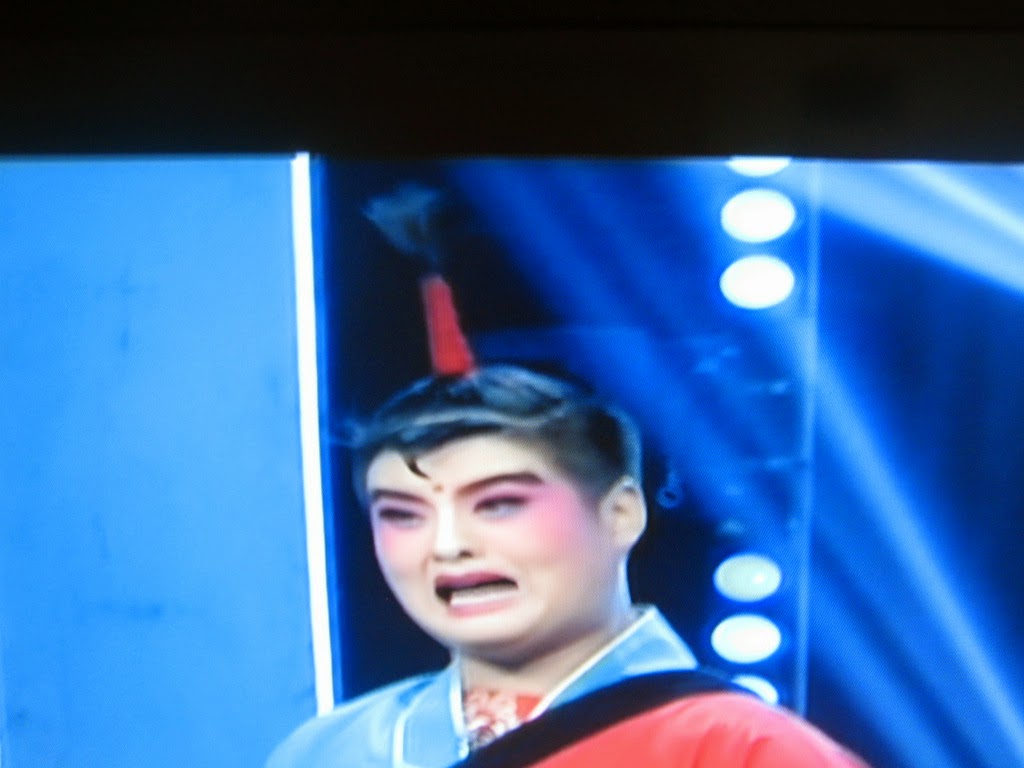 Ah, crappy Chinese TV specials! No Chinese holiday is complete without them!

And now, I'll end on a sweet note...Happy 4th Anniversary to my sweet Jeremy. I love you so very much and I cannot wait to see what each year into our future brings!
Posted by JQ at 11:53 PM

Email ThisBlogThis!Share to TwitterShare to FacebookShare to Pinterest
Labels: Crazy Chinese TV, Family, Good Husband, Holidays, Love, Metro, Someone Made Me Eat This