The Loneliest Bike In The World

It might surprise you to know that I actually do not know how to ride a bicycle. Yes, really. I had a bike with training wheels but to make a long story very short, by the time anyone had a chance to devote time to helping me ride it without the training wheels, I was old enough to drive a car. And had my own car. And I was so totally NOT going to be caught dead pedaling around on a bicycle for God's sake.

But this post isn't about me or my lack of bicycling skills. It's about the bicycle that has been chained up to the stairwell in our building since the beginning of time. 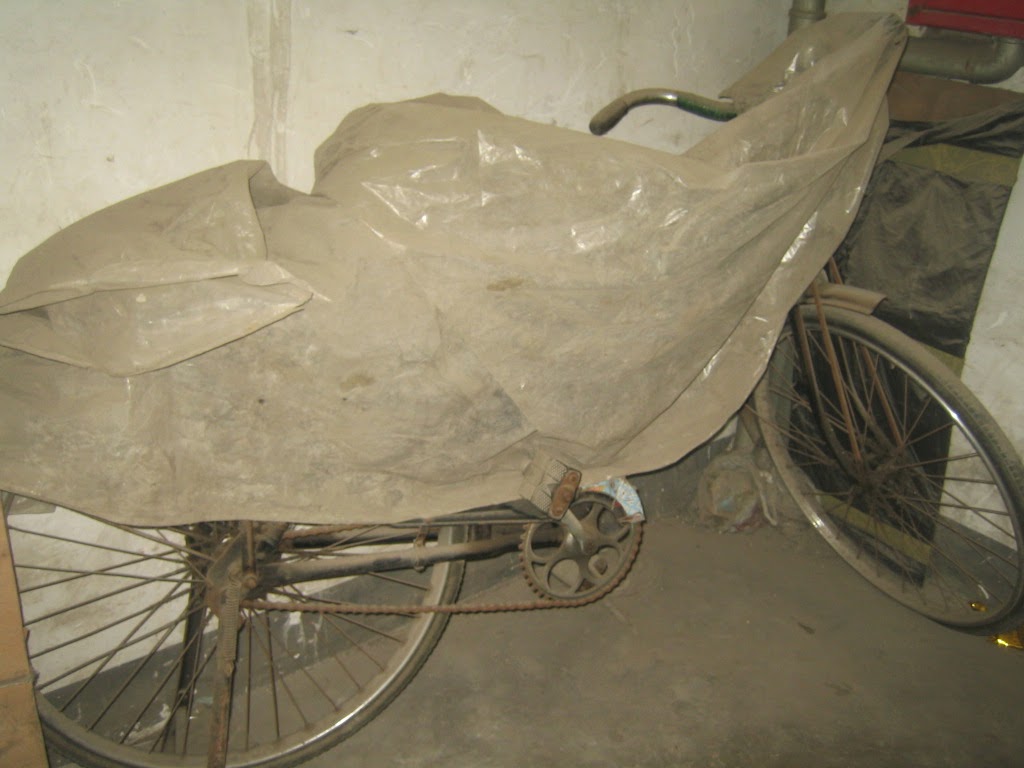 Ok, so maybe it hasn't been around since life began existing, but close enough. Our building was built in 2001. It is hard to believe it's just 13 years old (you'd think it had been around for at least 20 years the way it looks, but that's China for you). What's even harder to believe is that this bike has been tethered here since the building was first built. My in-laws bought this apartment when this building was brand new and in they moved. And, according to my husband, they had to struggle to maneuver their things up the stairs (this is an 8-story building and in China, buildings under 10 stories do not get to have elevators) past this bicycle on the 4th floor up to the house that is now ours on the 6th floor.

It has been here all this time and I've often glared at it and wondered why in the hell someone would chain up a bike inside a narrow stairwell, yet I've always forgotten to write about it.

It totally wouldn't bother me if the person who owned this bicycle would, you know, RIDE it from time to time. But it has NEVER moved. Not even an inch. EVER. Since this building was built. 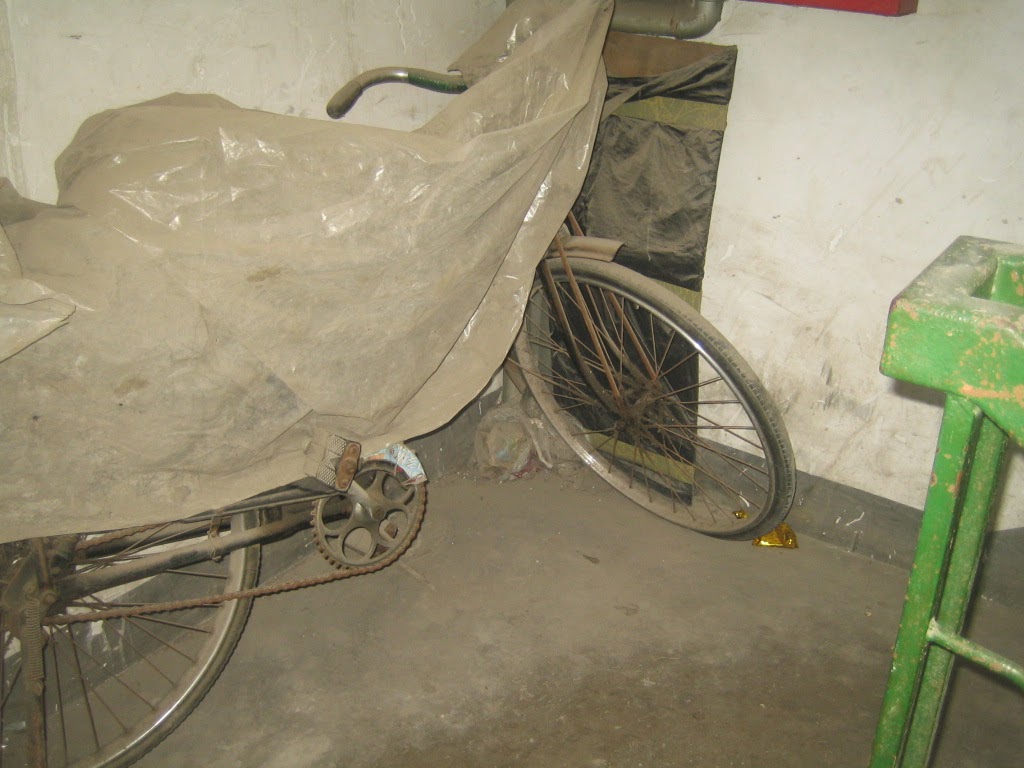 I asked my husband about it today and he told me something interesting. A couple years ago when we bought our new, giant refrigerator, those poor guys moving it up 6 flights of stairs were ready to kill when they had to try to get that thing past this dusty, ancient bicycle. Jeremy had knocked on the door of the home he suspected it belonged to. A woman answered and said that the bike was her father's, but he didn't live there.

Of course! Why keep a bike at your own house when you can keep it at your daughter's house! AND NEVER USE IT! Because this makes perfect sense to all Chinese people apparently, except for my own husband who is a bit of an anomaly (thankfully!). She went on to say that her father had the key for the bike lock so she couldn't move it. ARE YOU KIDDING ME?!? How could I possibly be surprised by this after living here for over 3 years? People here are so beyond illogical with these kinds of things. Let's chain up a bicycle we will NEVER use in the path of a bunch of other residents and not even have a key to unlock it when someone might, say, have to move a large refrigerator or other furniture up or down the stairs. Brilliant! 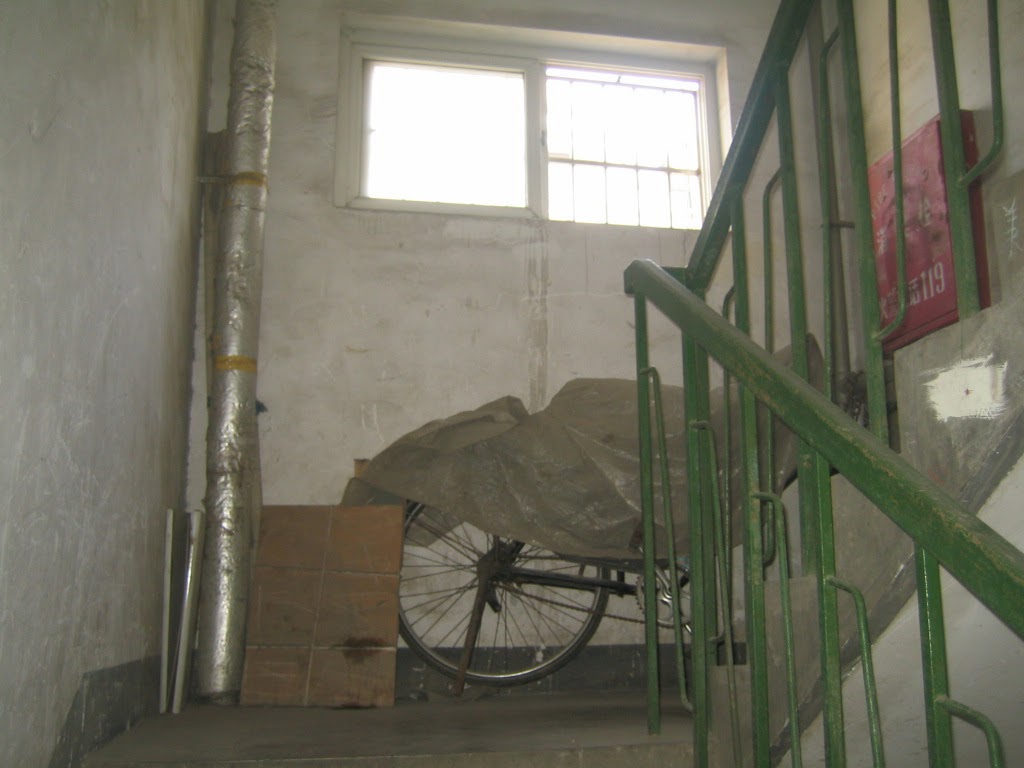 Why no one else has taken bolt cutters to this relic and set it free, I will never know. And why this stupid woman hasn't sold it is also a mystery to me. Maybe she likes that everyone in the building absolutely hates her. Here, people are extremely selfish, not giving any thought about how their placement of bikes or even cars causes obstacles and inconveniences for everyone else. Ultimately, this is the result of generations of people having only one child and not ever teaching accountability to every resulting generation. But this, my husband explained, is the Chinese way. Of course!
Posted by JQ at 1:20 AM