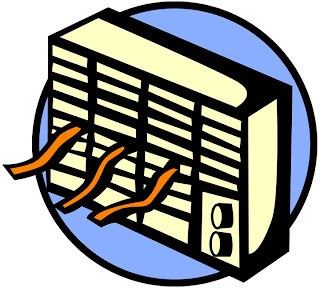 Have you heard about those power outages, affecting millions of Americans? Maybe you're one of those poor folks, and if you are, I'm sorry and I hope your electricity returns soon. I'm sure those people would have their air conditioning units running full-blast right now if they had a way to power it.

Here in China, I appreciate every air-conditioned moment I've got, for they don't come easy. Even in my own home. We have 2 wall units: one is in our bedroom and the other is in Raelynn's room. I have to admit that we actually didn't even need to turn on our A/C until the last few days of June. It was truly breezy and nice outside, especially at night. But in a matter of days, it turned into that brutally hot summer weather and air conditioning became a necessity, in my eyes at least.

Before taking a much-deserved shower at the end of my day, I turned on our air. Jeremy, ever the penny-pincher, tells me I should wait until I get out of the shower to turn it on. Which to me makes no sense because I'm taking a shower because I feel hot, sweaty and sticky. Why would I take a shower and then walk back into hot, sweaty and sticky conditions? I won that war but very late that same night, I awoke. Not to my daughter's screams, thankfully. But to an overwhelming feeling of hot. I was sweating as though I'd had a nightmare. Why was I so fucking hot? And then, as Jeremy snored away, I noticed that he, at some point, had turned off the air while I slept in my mock-arctic bliss.

So why does he do stupid shit like that? Because his parents (and every other Chinese person ever) think the cost electricity generated from an air unit is akin to the astronomical national debt. Seriously. It does not cost THAT much to cool down our house. And it would stay cooler too IF YOU AND YOUR CRAZY PARENTS WOULDN'T OPEN THE FUCKING WINDOWS WHILE RUNNING THE A/C! Sweet merciful crap!

I can't stay cool at school either. There, I have to share an office with 4 Korean teachers, our director (also Korean) and the other English teacher (who happens to be French). And I like all of them until it comes to concerns about turning on the air conditioner. Well, the other English teacher had no right to complain the other day because she showed up to work dressed like she was going to a kegger on the beach. She had on a tank top that gaped at her underarm, revealing her bra, and way-too-short jean shorts. She has the figure for it but it was absolutely inappropriate to wear to work. She whined that she was cold and I shot her a look that would have frozen anything solid in its tracks. PUT ON SOME FUCKING CLOTHES! What cracks me up most about that is every other day, she dresses like it's winter outside. Long sleeves and jeans, sometimes long sleeves and capri pants. I think her icy personality probably contributes to her constant chilliness but that's a whole 'nother story.

And speaking of different stories, the Koreans are a whole different genre. ALL of them get cold quickly. But at least none of them show up wearing skimpy tank tops and daisy dukes. My boss, Lesley, is always dressed immaculately. The woman has incredible style. She's very classy. But she's always cold too, despite dressing in clothes that cover her quite well. As for the other Korean teachers, in Korean culture, they do not speak up to someone in authority if they disagree. So, for example, if Lesley changes the schedule on us, they just smile and nod and go along with it. If she turns off the air and it's hot, they smile and nod too. But an American like me will speak up. And for that, my Korean teacher, Christina, is grateful. I think even Kelly and Eunice, two of the other Korean teachers, don't want to be trapped in a room with humid air occasionally wafting in from one window that Lesley has opened just a slit.

Then, there's Eun Ah. I've mentioned her before. She complains when I turn on the air in our office. And in her classroom - where I have to go each afternoon to teach the four year olds for 30 minutes - she NEVER turns on the air. NEVER! She just opens the fucking windows even if it is hot and humid and there's no breeze and her poor little students are drenched in sweat. I'm sorry, but I shouldn't have to fucking sweat at my job. I can't take off my clothes. I don't understand what is so fucking hard about bringing a sweater or jacket with you in case you get cold. At least the semester is almost over (2 days left - yay!) and I get a month of vacation. A vacation where I can play at home with Raelynn, who also hates being hot, with the A/C units cranked to full blast.
Posted by JQ at 6:58 AM