I Walk Among Them 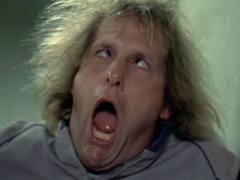 I thought this picture of Jeff Daniels in "Dumb and Dumber" made for a good visual. That movie so totally rules!


You know those "they walk among us" jokes? I don't know who is originally responsible for them, but here's a link to some. The premise is that there are more of us intelligent folks ambling about in this world and for us to watch out for the stupid people out there. Well, here in China, it seems the reverse: smart people with common sense are in the minority and the vast unwashed masses of morons are who I walk among.

The man who lives directly beneath us is no exception. Actually, he makes MIL look like a valedictorian. Yes, he is truly that stupid. I always claim MIL is so stupid it is frightening. Not after today. This man is without a doubt the scariest kind of stupid there is. Here is why...

This morning, as I left for work, I smelled gasoline in our stairwell. I remarked about it to Jeremy as I was saying goodbye to him and Raelynn. He thought the smell was wafting in from outside. But when I got downstairs and outside, I didn't smell it anymore. I sent him a message while in Hao Shufu's taxi asking him to check it out. It had smelled very strong to me and I worried that one of the scumbag migrant workers from upstairs would smoke and start a massive explosion. When I got to work, Jeremy had texted back saying that our neighbor beneath us was the cause of the smell. Get ready for this: he said that the people up on floor 8 have a dog that keeps peeing on his door so instead of *gasp* talking to them about it like a normal person, he DOUSED HIS OWN DOOR AND THE LANDING WITH GASOLINE to attempt to deter the creature. I so wish that I was kidding but sadly, I am not. This guy is a fucking moron. A dangerous moron!

I get that it must be annoying to have a dog piss on your door every day. Why it pees on just his door, I don't know. We have never had this problem and the dog has to walk past our door too. Maybe those people let the dog do it on purpose since this guy is obviously seriously unhinged. In any event, this guy is a total fuckwad. He could have killed everyone in the building. I was shaking in fear at work until Jeremy had called me back to let me know the neighbor had cleaned it up. FIL had gone to check and make sure of it. The thought of a horrible explosion taking my daughter away from me, and yes, even MIL too, made me absolutely sick. I don't like MIL and sometimes I do hate her a little but I would never want something like that to happen to her.

My husband says this guy is a few wontons short of some soup since his wife left him some years ago. If he uses gasoline to attempt to stop pesky dogs from pissing on his door, I can see why she left him. Why couldn't he put chili powder there? It would have sent the dog a strong message without harming it or anyone in our building. I am beyond grateful that everything worked out okay though. We will just have to keep walking among them until we move back to the states. Are people this stupid in America? I've forgotten if they are this stupid, less stupid or more stupid. Of course, my old state of Florida seems to be the winner in all things stupid. But you tell me - do the people of China sound stupider (see all my MIL posts in addition to this one describing the neighbor), or are the people of the US stupider? Or is it a tie? Or is Florida still the champ? Discuss!
Posted by JQ at 6:48 AM

Email ThisBlogThis!Share to TwitterShare to FacebookShare to Pinterest
Labels: Only In China, Stupid People, Weirdos