How Metro Lost Our Business 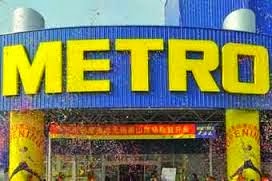 I've talked about Metro many times before. It's a German-owned Costco-like store. I've complained about how stupid the employees are there. Actually, I also complained about them in this post too. And let's not forget that Metro came in at number 3 on my countdown of Qingdao's worst bathrooms. Well today, we can forget all about ever shopping at Metro again. Because they don't want our business.

Like Costco back home, you need to have a membership to Metro. Which we have. When we first moved to Qingdao in late 2010, my husband's family included us in the membership. I was so happy because it is just a few minutes from our home and has tons of imported items. But as I've mentioned in previous posts, the employees tend to suck and the bathrooms are heinous. Still, we've been shopping there regularly since we've been living here. Until today that is.

Today is Duanwu's Holiday. Which has something to do with dragon boats and zong zi. So we had off work. 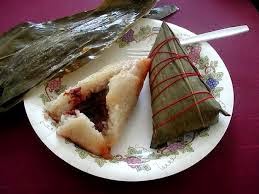 That's a zong zi, by the way. I don't care for them but my husband and Raelynn love them. It's rice with assorted fillings steamed inside of banana leaves. Sometimes they use jujubes inside with the rice and other times it's meat. I've tried both and I'm just not a fan.

We had wanted to go to Metro yesterday but after going to the doctor to check on the baby and discovering my salt intake was off the charts, we were caught in a torrential downpour. Plus Raelynn had fallen asleep in the car. We decided to just go home and head to Metro later. Of course, everyone else decided to go to Metro today too. But now as we entered, we were made to line up and write down our membership number. The guy in front of us, incidentally, was shaving with an electric razor. Jeremy and I were so stunned we couldn't even figure how to nonchalantly photograph him. Now I've DEFINITELY seen it all.

The line was being held up by an incredibly stupid family. And the line backed up more. And more. And we thought, fuck this. We left and decided to go to another supermarket. We sat in the car for about 10 minutes, trying to decide which one. Carrefour would also be crowded, particularly the location we like on Hong Kong Road. It's so much more foreigner-friendly over there and has a much better selection of imports than the Carrefour that's closest to our home. We discussed this back and forth, trying to figure out what option was the least aggravating. Jeremy then decided to run into the Metro one last time to see if that daunting line had finally cleared away. A few minutes later, he came back to the car.

He tells us there's no more Metro for us. Metro, quite stupidly I might add, has decided to only keep memberships for businesses. They don't want to allow any more family memberships. They offered us the chance to shop one last time today, but we were so angry, we refused. Fine, Metro. You don't want our money? We'll shop elsewhere. We were not the only family turned away today and I suspect those families were rather pissed as well. Some of them, Jeremy had said, were complaining that they'd come from much further away than us only to be turned away. How absolutely infuriating for those people.

My husband says Metro came to Qingdao about 10 years ago. They had only opened up to sell to businesses. Only problem was that they built it and no one came. They had so few customers so they decided to expand their business by granting memberships to families as well. And thus, Metro became successful in Qingdao. But now for whatever idiotic reason, they've decided to go back to only hosting business memberships. Be that way then, Metro. You won't last another 10 years in this town without those family memberships.

Even though we were bummed out, we decided to go to the Aeon, a Japanese-owned supermarket formerly known as Jusco, in the Wanda Plaza mall. There are several Aeon locations in Qingdao, but if you've lived here for a few years like us, you can't help but refer to it as Jusco. It's just what all of us know it as.

We were pleasantly surprised to discover how uncrowded it was. And the staff was friendly and helpful! Imagine that! The prices were mostly fair there too. And there were so many more things to choose from. The bakery was hands-down 100 times better than Metro's. They actually had real frosted donuts. Metro would occasionally have unfrosted donuts that tasted like crap. These donuts, I must admit, I did not have high hopes for but we decided to try them out. And they were great! While in the bakery, I saw a woman with what looked like a spinach tortilla wrap sandwich. I had to find it. As we ventured back into the ready-made deli area, there it was by a huge selection of sushi (which I had to ignore because, hello, pregnant here...no sushi for this girl). The wrap was filled with vegetables and chicken. I never could have found anything like that at Metro.

The verdict? My wrap rocked! Jeremy got some Chinese potato bread thing that I normally find just so-so. Here it was incredibly delicious. We were so pleased with the outcome of our supermarket adventure that, sorry Metro, we just won't be needing you anymore. Go ahead and beg for us back but honestly, as someone who majored in marketing, that was the absolute stupidest business move you could possibly make, even after 10 years of establishing yourself in this market. Congratulations on your impeding failure.
Posted by JQ at 6:47 AM

Email ThisBlogThis!Share to TwitterShare to FacebookShare to Pinterest
Labels: Annoying Chinese Things, Metro, Thanks For Nothing