I once wrote how Qingdao is famed for plastic bags, in addition to its' famous beer. But it seems to be making a name for itself with how many stupid people there are per square meter here. And perhaps with that in mind, it should consider renaming itself "Stupidopolis."

My MIL alone is cause to rename this place "Stupidopolis." Hell, they should make her some high-ranking stupid official of stupidity. Since I last posted, she's done a number of things to be considered for world's spokesperson for what happens when common sense is completely lacking. But she's not the only one. Oh man! The stupid things I see here every day! Some days, I just shrug my shoulders. Other days, I can't stop laughing. But on days like today, I've got to let it out before I go on stupid overload.

First, I'll begin with everyone's favorite bovine-brained spaz, MIL. For Lord knows what reason, she decided to change Raelynn into a different t-shirt while I was at work one day. And then, changed her back into whatever I'd put her in. How do I know this? Because today, after taking Raelynn to the church play group, I changed her into lighter clothing because with the radiators on in our home, it's really quite toasty in here. I put Raelynn in her new Bubba Gump shirt that my parents had brought her. She had only worn it once, in my presence, on the day my parents flew back out. She did not get anything on it then. So why, then, would it have stains on it when I put her in it today?!? I realized that far-sighted oaf had something to do with it. Angrily, I fumed off to the bathroom to scrub oily Chinese food stains out of Raelynn's shirt, muttering strings of curse words so foul, even I was surprised at myself. How hard is it for her to put a bib on the baby?!? How hard is it for her to clean up stains on clothing if she makes them?!? Does she need glasses?!? How she could miss those stains is a mystery to me! And then to put it back in the closet like it was fresh and clean!!!! AUGH!!!! Even with all my laborious efforts, I can still see the stains though they are fainter now. My folks bought the shirt a little bigger so that Raelynn could grow into it and wear it for a while. I purposely dress Raelynn in things I don't give a damn about when I go to work just so shit like this doesn't happen and look at what fucking happened! Sweet fuckity fuck!

Also, all week, she has been leaving luo bo all over the house. What's a luo bo, you ask? It's a green Chinese radish. A picture is worth 1,000 words: 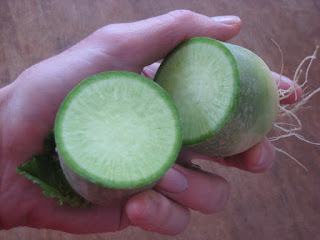 It has a really sharp taste. It's not too bad but people here are convinced that it has all these benefits for your health. My husband is one of them and claims it will help with digestion. Yes, it helps you burp out the most disgusting smells known to man and causes frequent farting. Lovely. He slices a piece of it for me and then stands over me, like an austere parent who knows their child, when left unattended, will hurl that slice of luo bo out the window or stuff it into the couch, never to be seen again.

Anyway, MIL cuts some of one luo bo up and leaves it on the kitchen counters. And in the dish drying rack. And then she cuts up a whole different one even though there's still plenty in the kitchen and leaves it on our dining table. And in our refrigerator. In the cabinets. And on the window sills. It's taking over my home! ARGH!!!!

Next candidate for mayor of "Stupidopolis" goes to the man that walked into our car while my husband was parking. I mentioned this on Facebook the other day but didn't go into great detail. Which I probably should have because I left my friend Chrystal with the impression that my husband is horrendously slow at parking. He's come a long way since his first days of driving. One day after picking me up from work, Jeremy began the process of parking in front of our apartment. He attempts to parallel park, which he's become quite good at. But the problem on this day is that he's selected a spot that is too small, much thanks to the two chowderheads in front and behind this vacant almost-space. I tell him this but he pays me no regard and lines our car up with the front one, then slowly starts rolling into position. It's at this time that I notice a man of about 45 or 50 walking way-too-close to the passenger side of the car. He practically rubbed up against us. "Watch out for the moron, Dear," I tell my husband but before he can figure out which moron (to be fair, there are just too many of them here) this man walks into our car as it is reversing. Now, we were not moving fast at all. The car was just rolling backward gently. As soon as he ran into us, our reverse sensor went berserk. The man didn't even stumble. He just kept on walking and dusted himself off and he went about his business.

Moments later, Jeremy concluded that I was right about the spot being too small and decided to park on the opposite side of the street where he would back into a spot up on the sidewalk, which I've mentioned is totally normal here. He's now perpendicular to the sidewalk and is in the street and just before he punches it to roll up onto the curb, I tell him to watch out. Cluelessly, a mom and daughter keep walking BEHIND our car. Not even on the sidewalk. In the street. Oblivious that we are reversing. These our are next candidates for officials in "Stupidopolis." There are so many people like this here that it boggles my mind as to HOW this population is so insanely high. Seriously. NO ONE has any common sense here, hence no one looks both ways to cross a street. I cannot even understand why anyone would walk into oncoming traffic without a death wish, but here they all are, walking among us.

And finally, a whole slew of candidates for official positions in the town of "Stupidopolis" can be found at Metro, the German-owned Costco-esque store here. We went this weekend to grab a few things. One of the things we needed was conditioner. In the aisle for hair care, there is a huge section of shampoos. And then there is a really small area of conditioner. They even have box sets which you would suppose would be one shampoo and one conditioner, but no. It's 2 shampoos! How utterly stupid! The only conditioner they carry at Metro is of the upper echelon. Stuff like L'Oreal, which is what I wound up buying. But as my husband and I were having a conversation about this, the 3 Metro employees just standing about uselessly in the aisle, began doing that idiotic clicking noise I fucking hate that all people seem to think is just fine to make to a baby. Most people do this here, so it's nothing new. But what pissed me off is that Jeremy and I are talking about something and instead of just clicking a few times, these women went clicking on and on and on and on and on and FUCKING ON until I turned and glared at them, and snapped in English, "Would you mind stopping that now please? Geez!" Thankfully, they understood me enough to cease and desist or I would have lobbed some bottles of shampoo and conditioner at their empty heads.

Really, everyone here deserves a position in office in "Stupidopolis." The people who block traffic and cause it to jam should be highly considered for something such as this. Or how could I ever forget the woman who took our order for the cake we had made for our vow renewal? I can't believe I almost forgot about her.

First, a look at the cake: 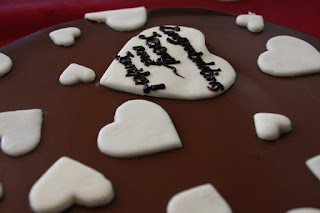 It was a cheesecake from the German bakery in the Hisense mall, which for those of you not in the know, it is the fanciest mall here what with Tiffany's, Prada and Chanel, just to name a few. I had asked her to top it with chocolate which took Jeremy forever to get her to understand. Chocolate shavings? No, chocolate sauce. Chocolate cocoa powder? Nooooo, chocolate sauce. And on and on until finally it was comprehended. When she asked us what we'd like to decorate it with, I asked my husband to ask her if she could just put some hearts on top. He asks and she brightens, and even I understand that this is no problem to have done. She runs off for a moment, and returns with what looks like fondant in the shape of hearts. Yes, that's perfect, I'd said. And my husband conveys to her that this is just what I'm looking for. Then she starts saying something else and I'm not sure what it is but she seems concerned about something. And that is when Jeremy told me one of the funniest things I have ever heard. I am so surprised that I didn't write this before. Are you ready? Presenting one of the stupidest things I have ever heard:
She had said that of course she could do the hearts but we shouldn't eat them. I was quite confused because I'd thought they were made of fondant, which is not just edible but tasty. "Oh, you can't eat them?" I asked my husband. And he then told me that you CAN eat them. They are purely edible but, and I quote: "She said we shouldn't eat them because they have too much sugar in them."

Did you see that? Yes. I'm not even joking. I wouldn't ever joke about cake. I laughed. Hard. Right there while writing out "Congratulations Jeremy and Jennifer" on a paper to ensure they would spell our names correctly. Is it any wonder why Chinese desserts are horrible? I can just see them now, withholding the sugar. But they'll dive right into a greasy plate of fried crap, cooked in way too much peanut oil. No, that can't possibly be even worse for you. THIS is why I went to the German bakery. At least the cake turned out beautifully. And deliciously. And we ate every single heart on it too.
Posted by JQ at 6:32 AM