The Morons Of Metro 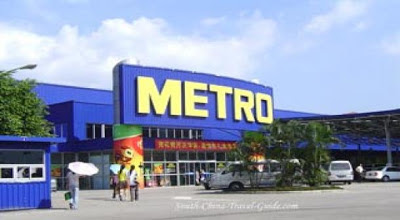 I think I mention Metro a lot on here. We certainly shop there a lot. If you're not familiar with it, it's a German-owned store that is a little like a Costco but not quite. The above picture looks just like the one we go to. Except for those green trees. And the cars seem to be parked in actual parking spaces and not just left all willy-nilly wherever the driver felt like leaving it before entering the store.

We go there a lot because it is literally a two-minute drive from our home and it has a lot of the things we use at reasonable prices. With the exception of major Chinese holidays, it's never horribly crowded either.

One thing we tend to overlook is how inept and/or rude the staff can be. A while back, when I was still pregnant with Raelynn, my husband was looking at some shoes there. He asked a saleswoman for a larger size and she started YELLING at him. Yes, that's right. He asked a woman who worked there in that shoe section if she could do her job and she was a total cunt. We never saw her there again after that episode and it's quite likely that bitch was fired. I mean geez! That was the worst of all.

Another time, I mentioned in this post about one of the employees repeatedly making those annoying clicking sounds I hate at the baby while Jeremy and I were discussing which hair care product to buy. If you're wondering what that's all about, don't be lazy like a Metro employee. Go read it and come back. I'll wait.

All caught up? Good. Now, on to the most recent annoying experience...

On Sunday, we went to Metro for a few items. I figured while we were there, I should pick up more razor blade refills for my Gillette. I know it's freezing and all but I simply CANNOT go without shaving my legs or armpits or regions in between. Even though my husband doesn't care if I don't shave, I CARE. Women here have a different attitude toward shaving (and grooming in general...YUCK!) but I am so not going to look like a yeti. In any event, I tell my husband I want to pick up more blades and on command, he steers the cart expertly into the aisle with the shaving items while I follow immediately behind with a snoring and adorable toddler in the stroller. It takes me just a second to pick the package of blades from the rack, at only 14.50 yuan. That's quite cheap. I toss them into the cart and off we start to go when one of the useless employees in that aisle says something to my husband. Wait, what the hell is going on?

I listen and suddenly begin to seethe. She is putting them back onto the rack and giving us a slip of paper. She tells us we HAVE TO present this paper when we are paying for our things at the checkout and THEN they will bring us these blades. These 14.50 yuan blades. Seriously? Do I look like I'm going to jack them? Holy hell!

I angrily and loudly complain to Jeremy about how moronic this is as we continue shopping. But as we move about the store, I actually forget about the razor blade refills. Until we get to the checkout. And I only remembered because Jeremy presented the cashier with the slip of paper the dolt in the aisle where the shaving items are located had given us. The cashier looks at us sympathetically and eyes the paper with annoyance. Perhaps she thinks this is as idiotic as I do. She picks up her little phone at the register and makes a call. I can't understand everything that's going on, but from her expression and my own husband's face, I knew something was up. The line began to back up behind us and the other customers on our line were becoming impatient. I was too. I mean, come the fuck on! If they had just let us put the blades in our cart to begin with, we would have paid for them and been on our way already and so would half of that line. But no! Store policy! I don't understand when they implemented this insipid policy because all of the other times I've purchased these blade refills there, we have never been asked to do this.

There was more waiting and more commotion because - get this - the stupid lady from the aisle wrote down the wrong product number on the paper she gave us! Dear Lord! They must have something on their job applications that says the equivalent of "you must be this stupid to work here" in Chinese. At this point, I'm telling Jeremy to fuck the blades and let's just pay for our other shit and go. No, no, he insists. The cashier had asked us what the price on this item was and hey, what was this item anyway. When we told her, her eyes glazed over. I could tell she found this whole thing as pointless as we did.

Shortly after she curtly snaps at someone on the phone, our sluggish and chunky friend from the aisle of shaving items heads toward our checkout line. Seeing the massive accumulation of people tapping their feet behind us, she picks up the pace. The cashier gave her a nice bitchy look. I like that cashier. She's quite possibly the only non-deficient person in the whole place. Next time we're at Carrefour, I'll look for my refills there. I don't want to deal with some half-assed full-ass attempting shrinkage control. Dear Metro, if you're so worried about people jacking your items, then put sensors on them that have to be removed at the checkout line. Derrrrrrrrrrrrr!
Posted by JQ at 6:40 AM