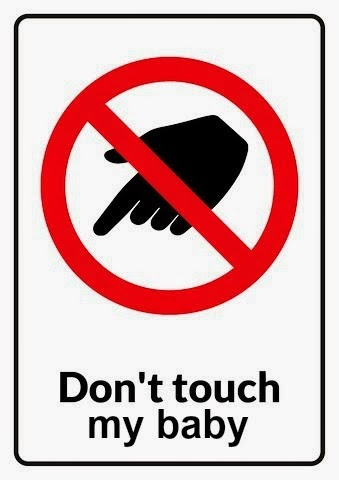 Image is from thechillmom.com who apparently has the same problem as me. I guess it is universal after all.

I didn't think I'd have to deal with this again until we had Baby Qu #2 and were out somewhere in the world with her. When Raelynn was a tiny baby, we had a difficult time trying to keep people from bothering us. Chinese people are incredibly well-meaning, but surrounding me while I'm out trying to buy groceries and holding an infant, then trying to touch that infant with dirty hands, made me very irritated as well as concerned. I wrote about all this here, so take a look. I've also written a much more culturally-friendly piece that is coming out in the next issue of Redstar Family Guide so stay tuned for that (the new issue is not currently linked up online just yet).

As Raelynn's grown bigger, that problem shrank away for us. Most people we meet in public will talk to us first or are perhaps waiting on us in a store and we feel comfortable letting them look at her and even hug her. It's much easier now to keep her hands clean and let her mingle.

This weekend though, for the first time in about 2 years, we encountered one of those idiots that just bothers your kid. We were at the Aeon supermarket nearest us, our new supermarket hangout since Metro decided to be a bunch of assholes. Our frying pan had fried it's last meal earlier in the week and was beyond repair so we were checking out our options in the home goods section. A very kind and helpful saleswoman was helping us with that. Or should I say she was helping Jeremy because, by default, I had to tend to Raelynn who was tired and hot (because it is mid-June and none of the stores turn on the A/C yet because everyone here is absolutely insane when it comes to indoor cooling) and therefore very prone to misbehaving.

All 3 of us were wearing baseball caps on this journey. Me, because my hair looked like total ass and I hate it right now since I can't go have it straightened while pregnant. Jeremy just wanted to wear his Miami Heat hat that Natalie sent. And Raelynn wanted to be like Mommy and Daddy. As I'm talking to Raelynn, some other saleswoman comes up and doesn't even say anything to me but just takes Raelynn's hat off her head. Raelynn screams and gets even more agitated than she already was. I just stare. "What the FUCK is wrong with you?" I yell at the woman. "You've upset my kid! Who the hell do you think you are taking her hat like that?" Understanding that I was now a very angry customer, she backpedaled and said in Chinese that she just wanted to get a look at my daughter. Then why didn't you come up and say hello to us first and ASK me? If you'd only approached us properly, I wouldn't have been angry and my child wouldn't have been upset with someone taking her hat off.

Jeremy didn't realize exactly what was going on because he was in the middle of choosing a new pan. After being shouted at, the idiot saleswoman retreated to her aisle. After Jeremy chose a pan, I gave him the thumbs up. Then he bought me a new whisk (I STILL have not been able to find mine, which is more proof that MIL either ate it or broke it) and a garlic press and as we chose those items, I began to explain what had happened while he was talking to the helpful saleswoman. It angered him too. People here are so socially awkward that it's frightening. THAT is what I hate about having kids here. Some people here are so wonderfully kind and friendly and they will talk to you first and ask your permission to either photograph your child or touch/hold your child. We like those kind of people. But what we don't like are moronic people who come up and pull some kind of shit like this. I guess it is just a fresh reminder for what is about to come our way once we have the baby. Bring it on, unwashed masses! I'm ready to kick your asses!
Posted by JQ at 6:51 AM