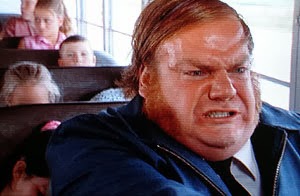 I don't have an actual photo of the bus driver in question, but I think this classic Chris Farley image will do just nicely.

Since I've been teaching at my school, I have always taken taxis home. For about 25 yuan, I'm back home in 20 minutes. Which was great because it gave me more time to spend with Raelynn. But recently, due to taxi drivers and their fares alike taking to using apps on their phones so that they may order a taxi to their location, it's made flagging one down so much more difficult. Now that I'm entering my 5th month of pregnancy AND I have my small child to cart home with me every day, I signed up to take the school bus.

In the mornings, I still have my driver of the last 3 years, Hao Shufu. But in the afternoons, there's no telling what part of town he'll be in so he can't pick me up. Last year, I started taking the school bus in August when there are absolutely no taxis, thanks to the beer festival and all the mutant tourists. It's air-conditioned and it sure beat sweating my ass off on the city buses.

The city buses aren't a good option for me now either. I have to change buses downtown and then when the second bus takes me to my stop, I've got to cross a huge intersection. This was no bother before I was pregnant. And it would be no bother if I weren't hauling around Raelynn. In August when I started taking the school bus, the driver would drop me off at a city bus stop that was still a bit away from my home. Meaning I could not walk there. I either had to hop on a city bus or have the good fortune to catch a taxi. This was when Gargoyle was the driver.

I called him Gargoyle because he was an old, bald Chinese guy that very much resembled a gargoyle you'd see perched outside on the ledge of a library, courthouse or other city building. He had little regard for traffic laws, swore loudly into his phone and just barely rolled to a stop to let you off before zooming away again. Gargoyle's bus was this ancient thing that smelled like rotting cheese and wheezed as much as he himself did as it climbed up hills. The brakes always felt like they were going to give out at any second too. I think all of us were relieved when Gargoyle's bus broke down and they commissioned a nicer bus for our route.

But this bus is driven by Surly. I only rode the bus with Surly in charge a few times last year. And then I resumed taking taxis. Now I have no choice but to be a passenger on the Surly Bus.

I asked the school if the bus could perhaps drop me closer to home so I wouldn't have to cross a dangerous intersection with a small child while pregnant. The bus coordinator at school talked to Surly the Bus Driver and told me it was no problem. On Monday, however, Surly gave me problems. Lucky for me, one of the Chinese teachers that takes that bus gets off just before me. She speaks English well too. She happens to be 8 months pregnant and had asked if she could be taken closer to her home, also on Harbin Road like me. Surly, despite agreeing to this with the bus coordinator, started to turn right on the road that comes just before Harbin Road, telling us this was the end of the line. She explained to him that we were pregnant, plus I had a now-sleeping child on my lap and it was only a short distance away for him to drive us. He begrudgingly agreed and swung the bus back north to Harbin Road, made the left turn around the roundabout and sped along. It took 2 whole minutes from the point where we had to coax him to do his job to drop us off. Yes, 2 minutes. God! How out of the way Pregnant Chinese Teacher and I are! How inconvenient for Surly!

Incidentally, this was the only time I have EVER been happy to see my MIL. She was waiting by the city bus stop where Surly let us off. I was grateful for her help because trying to get down the steep bus stairs with my bag, Raelynn's bag AND a now-waking-up Raelynn, all while pregnant is much harder than I expected. I was worried I'd fall or drop her, or both, so it was nice to have MIL's help.

On Tuesday, I spoke to the school again about Surly. I told them what the pregnant Chinese teacher had said that Surly had said. They told me again to take this same bus, that this was his route and not to worry. So on Tuesday, Raelynn and I again boarded bus #6. As we sat there before the bus departed, Surly got on and he said something to the pregnant Chinese teacher, who turned to me and said that Surly wanted us to get off his bus and take a different bus. My friend and colleague, Patrick, piped up from a few rows back and told me not to get off the bus otherwise I'd wind up with another driver who didn't know where to drop me. I yelled that the school told me to take this bus and if he had a problem with that, he better consult the school. Pregnant Chinese Teacher politely translated that and Surly shut the fuck up and drove the bus, telling Pregnant Chinese Teacher that we had to take a different bus tomorrow. Oh really, fuckmunch?

Today, Wednesday, I marched upstairs and spoke to the bus coordinator via a translator at school. I detailed Surly's stupid comments and told them if I am to take another bus to please tell me which bus so I can stop having these annoying arguments with Surly in a language that I speak so poorly everyfuckingday.  I'm not getting off a bus my school tells me to take because he, a bus driver, tells me to take a different one. You are NOT the bus route coordinator! I'm sorry it is your lot in life to drive a bus. I don't think anyone truly grows up and WANTS to become a bus driver, do they? And this is no offense to all bus drivers, but all offense to Surly. If you don't want to drive a bus full of Korean children and their teachers to their bus stops around town then FIND ANOTHER FUCKING JOB!

Incidentally, Surly the Bus Driver left some students sleeping on his bus last year and drove past their stop. At the end of the line (likely where he tried to boot me off), he kicked them off the bus. They were new to China and didn't speak any Chinese and had no idea where they were. The children called their parents in tears. Understandably, the parents complained. Who wouldn't? I would have gone in with a lead pipe to the guy's kneecaps but that's just me. Yet, he is STILL driving a bus for our school. If this happened in the US, this guy would never be allowed to drive a bus full of children ever again. It amazes me that this kind of crap is tolerated here. When I told my husband about the Surly situation, he said that with Chinese people, when they tell you no about something they have to do, you have to be pushy and argue with them until they agree. *facepalm* Yes, really. This is among the many things that are severely wrong here. What Surly and those like him don't realize is that I will go to war on your ass. Which is precisely what I did.

The bus coordinator and the translator tell me to check back in the afternoon as they would check out if I needed to take a different bus or stay on the same bus. In the afternoon, I was promised that bus #6 was still my bus, and Surly's boss had said so. They said Surly would not give me any more problems. I told them he better not or he'd be the first bus driver ever to get a black eye from a pregnant woman holding a toddler.

And what a pleasant surprise...Surly shut the fuck up and drove the bus without so much as a huff. Finally, I can enjoy the silence of no bitching from Surly AND a sleeping angel on my lap.
Posted by JQ at 2:03 AM