Give Me A Break!

Yesterday, I saw this article on the Shanghaiist. In case you're too lazy to click, it's about a bunch of dancing aunties (sometimes known as dancing grannies) who refused to dance somewhere else and are annoying the animals and patrons of the Shanghai Zoo. Dancing aunties have become somewhat of an issue here in China. My friend over at Crazy Chinese Family has written about his own Chinese MIL and her dancing. It's a thing, one I wish my MIL would get into and dance far away from here. For now, she just sings annoying ancient Chinese songs out of tune.

Anyway, the article pissed me off enough for me to bitch briefly about it on my Facebook (both my personal page as well as my blog page) and so I knew I had to devote a blog post to it.

First, here's a photo of a typical dancing auntie ensemble, from The Australian: 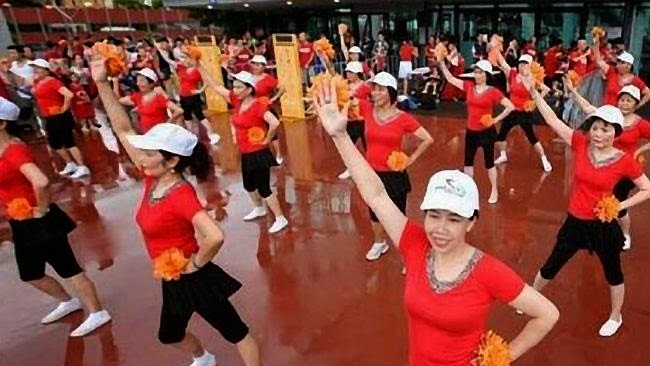 Dancing aunties aren't really that old. Look at these women in this photo. And look at the women in the Shanghaiist link I provided at the beginning of this article. Do these women look frail and decrepit to you? No? Yeah, not to me either. So why then are police afraid to tell them that they should find another place to dance?

Here's the end of the article:
The women, who've chosen the amphibian and reptile area as their disco arena, have been told repeatedly by staff to obey the rules, as their noisy music disturbs the animals.“Other visitors have also complained about the loud music. It affects the animals and disturbs their reproduction activity," a zoo official surnamed Ye said in a Shanghai Daily report. One of the ladies, however, reasoned that “the animals enjoy the music and watch us dance.” Ye said the zoo had reached an agreement with the dancers a while back to stay 10 meters away from the reptiles, but that's all gone out the window.
He said that because of their age and because "some of them have high blood pressure and other diseases," all they can do is try to persuade.

Yes, really. Check out that Shanghai Daily link too. No offense to Shanghaiist but the Shanghai Daily article is better written and additionally provides more details. I discussed this with Jeremy who of course defended these "old" people. He said they pay taxes and there's not many places to find where they can dance. He says America is a larger country with less people. That may be so, but what does that have to do with following rules? That is China's problem, I tell him. That no one here obeys the rules that are set up.

In America, if there were groups of dancing grannies, if they happened to congregate in an area that they weren't supposed to, someone in authority would likely come along and tell them politely that they were violating an ordinance and would need to find another place to go. The grannies would likely obey that and find another place to do their dancing. If anyone got surly, they'd likely be hit with fines. And if they took it to an extreme level, they'd likely be ushered off to jail. But I don't see that happening. But here? Oh, but I'm old and frail! You'll make me die by talking to me like an adult and telling me, even kindly, that I cannot dance here.

I don't know about other parts of the US, but in Florida, when I worked mall jobs I always noticed that as soon as the mall was opened up by the security guards, swarms of old people would come in to get their exercise. They would walk all over together to get their exercise in the chillingly refreshing air-conditioned mall. Not once do I ever remember these people making too much noise, impeding the walkways or causing any other problems. They did their thing and were usually gone before the stores opened and the shoppers came. And these people - now these people were old! Definitely older than 50 and 60.

And guess what? I pay my taxes back in the US. If I were breaking some sort of public rule and someone confronted me about it, I would stop immediately. I would go dance elsewhere. There are plenty of other places to go. Here, it's all about making laws and no one obeys them. Jeremy tried to tell me that wasn't true but then I brought up something that disgusts him - smoking. They made a law about smoking in certain places. Go anywhere in any city in China and you will see "No Smoking" signs posted in many places. And right by them, you'll see some loser puffing away. I can't even begin to tell you how many times we've gone into a restaurant with "No Smoking" signs posted on every wall and then someone will light up right there. Jeremy will usually smile politely and point at our children and ask them to please not smoke. Everyone cooperates then, thankfully, but my point to him about all this was that no one follows the laws here and THAT is the problem with China. Things will always be behind here because people think that the rules don't apply to them. How very sad.

I hope those dancing aunties realize that not everyone wants to hear or see their dancing, there are plenty of other places to dance and that no, the animals do not want very loud, bad music and stomping near their habitats. And I wish everyone else would realize that older people here are not going to just drop dead when you ask them to obey the rules - whether you are polite about it or you call them all sea hags and chase them away with a broom. Additionally, I wish the alligators would come out of the habitat and enjoy the slow-footed ones for lunch. I'm always rooting for the animals.
Posted by JQ at 10:51 PM

Email ThisBlogThis!Share to TwitterShare to FacebookShare to Pinterest
Labels: Annoying Chinese Things, Current Events, Major Rant, Only In China, Society Down The Tubes