Don't Stand So Close To Me 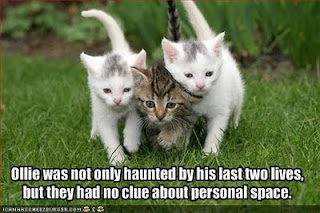 There are a number of things I miss about America, which I'll get into another time. One of those things, which is blatantly missing from China (and Asia as a whole), is personal space. Yes, my American friends back home. Enjoy your personal space. Because here, it is non-existent. It's been annoying to me since I moved out here but I've learned to deal with it the best I can. The problem now of course is that I have Raelynn. Fuck my personal space...hers is much more important. 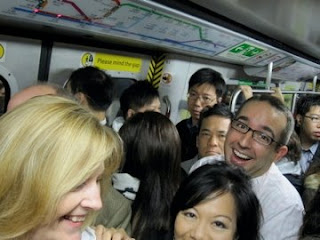 Actual photo of lack of personal space in Asia, courtesy of Picasa Web Albums. I should add that once in Korea, my husband and I got on a very crowded train during morning rush hour and the man behind him was so determined to read the morning paper he had it shoved up onto my poor husband's shoulder. Also, I've been on trains more crowded than this one. Yeah...ugh.

In the states, I never once tried to touch the hands or feet (or any part) of a newborn or any baby. On several occasions, I was invited to do so but was reluctant. It would never occur to me to be out in a public place, see a stranger with an infant, approach that person and their baby and then attempt to touch the baby without being invited to by the parent. I've been abroad for a year and a half and sincerely cannot recall anything like this happening at home to any of my friends with children.

But here, it happens ALL the time! We all know from my previous posts how I constantly have to remind my own MIL to wash her damn hands every time she goes to pick up Raelynn. Imagine a bunch of unwashed strangers surrounding you at the store, like zombies going in for the kill, mouths gaping, dirty hands extended. I can't believe the balls these people have, though more likely, it is lack of education. Most of these people don't think about germs and how they can be transferred. They're not intending to hurt my baby but what they don't see could make her very sick. To them, they are being kind and friendly and likely, a smidge curious too. To me, unless I see them sterilizing their grimy hands, I go on high alert.

At Gymboree, I actually had to smack an older woman's hand as she reached out suddenly to touch Raelynn, who I had sleeping peacefully in her carrier. I was there for a breastfeeding meeting and was actually speaking with the leader of the group who told the woman in Chinese not to touch my newborn. Before this, a well-meaning husband of one of the wives came up, speaking English to me. As he asked questions about Raelynn, he started to reach his hand out and I had to stop him too.

It sucks, really. All I want is to go out and show my baby the world. But I can't just enjoy my time outside with her. I'm constantly watching everyone around us, making sure no one sneaks up and touches her. And man are they sneaky here! Xiaolong and I went out to dinner on Raelynn's one month birthday and afterwards, wandered about through some shops. He lead us into a glasses store, where he finally found a case adequate for his sunglasses. He handed money over to the clerk and she went to make change. She brought it back and then counted it out for my husband. And then, she stuck her hand out in one swift move and touched Raelynn's hand! AFTER TOUCHING MONEY! AUGH! Money is one of the dirtiest things there is. Just think of how many hands it goes through. Maybe some of it falls on a dirty bathroom floor. Much of it handled by people who DON'T WASH THEIR HANDS AFTER USING THE BATHROOM! It's not just money here that is dirty...it's everywhere folks. So wash your hands after you touch it. My husband and I became quite angry and I feverishly dug into the diaper bag for the wipes and began disinfecting my baby's hand while he told her how rude she was, not to mention, careless, for potentially spreading germs to a newborn.

Just yesterday, we were swarmed at a little convenience store in our neighborhood. A simple run for chocolate and other snacktacular items turned into a complex situation as well-meaning Chinese folks surrounded us, ooohing and ahhhing about Raelynn. They assaulted my husband with a barrage of questions...is it a boy or girl? How old? What's her name? I cradled Raelynn even closer to me and starting shooing hands away from her as my husband told them all not to stand so close to me and not to touch the baby. We had the same problem in the evening when we went to take our nightly family walk. We'd found a fruit stand we really liked and stopped by on our route to pick up some bananas. A woman was there with her young son. They immediately stared at Raelynn and as my husband was speaking to the owner of the fruit stand, the woman reached her hand out to touch Raelynn. I was on it though. I darted out of the way, yelling, "Bu you!" (pronounced like "boo yo") which is Chinese for "Don't!" Xiaolong explained to her the story of germs and then she offered her apology in English. I swear people out this way don't speak much English but when they do it is one of these phrases for sure:
"Hello!"
"Hi!"
"How are you?"
"I am fine."
"Sorry!"

While I appreciate the apology (in my native tongue no less), I'd appreciate it much more if people here just kept their fucking hands to themselves.
Posted by JQ at 10:29 PM