Beware! New Driver On Board!

Believe it or not, I've been brave enough to get back into the car with Jeremy driving several more times since my last post. He's getting better. Really! Well, these things take time. It's not like he's the best driver ever suddenly over night. But the more practice he gets, the more confident he seems.

Raelynn and I braved a ride to the Metro with him. Metro is like a German-owned Costco-eque store. You can buy some things in bulk but mostly, you can buy a variety of foreign products, especially groceries, at really great prices. If my husband really wants to make me happy, he can take me to Metro and plant me right in front of the Betty Crocker section. Of course, when I pointed at a can of artichokes that I wanted to bake onto a pizza, he refused, citing the 35 yuan per can as too pricey. Meanwhile, he didn't bat an eye at the cost of his Chinese-style sausage. But I digress.

The ride to Metro was just fine, if a bit slow. Jeremy drives really slowly. But it's okay because he's put a sticker on the back of the car. It says "shi xi" which he says translates to "practice driver." This is supposed to serve as a warning to the billions of other drivers here to lookout for him because, as I said, he drives really slowly. That and he stalls a lot. A LOT. Like when we left the Metro. First, he had trouble backing out of our parking space. He kept stalling out. He must have stalled out nearly 15 times on a simple reverse. I myself could never master the art of driving manual transmission but I will tell you this: the only thing I never did fuck up was driving in reverse! Oh Jeremy!

Perhaps even more amusing was when we got to our house shortly after that. Jeremy attempted to parallel park. If you know me personally, then you know I have got to be THE worst parallel parker. EVER. Until now. Yes, Jeremy has swooped in and stolen the title from me. How can I be so harsh? Very simply. Jeremy was trying to parallel park into a spot that had a spot open behind it AND HE KEPT STALLING OUT AND STICKING OUT INTO THE STREET. He must have restarted the car 30 times and I am seriously not exaggerating here. I had a hard time not laughing at him. He asked me to get out and guide him yet he ignored every instruction I gave him. Miraculously, he finally got the little Aveo into the spot properly.

Today, I took another ride with Jeremy. It's pay day and I had to go out to my school to pick up my money. I told him not to worry; that I would just sweat my ass off on the bus. After all, he is busy with work. But insurance agents don't have to sit about at a desk all day and he's got quite a bit of freedom. He insisted upon driving me so what was I to do? Well, for starters, I was to try not to go crazy as we crept along geriatrically down the streets of Qingdao. And I was to try to amuse myself with my own banter. My husband is so new to driving that talking during the drive is difficult for him at this time. I wanted to flick on the stereo but I didn't dare. I did take note that it has a CD player and plotted to bring along some music the next time.

Despite my telling him my driver Hao Shufu's shortcut to school, Jeremy took the long way. And he didn't put the A/C on which sucked big time. If you don't know how I feel about people being too cheap to turn on the air conditioning, please see this post. As we came to a stop at a traffic light closer to my school though, I heard an odd noise. Whir-eet...whir-eet...whir-eet...whir-eet...whir-eet...whir-eet. "What IS that noise?" I say almost rhetorically and as I turn around I have the answer. Somehow, my husband has managed to accidentally turn on the rear wiper. Which is waving energetically on this bright and sunny, rain-free day, at all the other drivers. That coupled with the sight of the "shi xi" sticker made me burst into hysterical laughter. It was only made worse by Jeremy's attempts at trying to shut the damn thing off. A passing motorist called over to us to tell us it was on. "Ta zhe dao!" (which translates to "he knows") I sing out and continue giggling away. Even Jeremy began laughing now.

While I ran inside the school to get my pay, he managed to make it stop so at least we didn't have to endure that whir-eet...whir-eet...whirt-eet sound the whole way back. And he did put the A/C on for the ride back home. Hopefully he'll have the whole car figured out soon. I mean, now he at least knows how to unlock the trunk all by himself. Here he is, posing with the "shi xi" sign on the back: 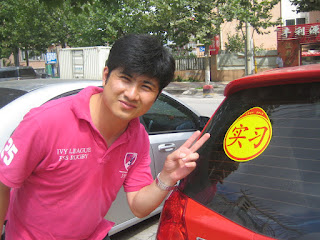