Remember the old Sunday comic strip The Family Circus? I was never really a fan but I'd still find myself reading it and consequently rolling my eyes afterward. With one exception: when Not Me was featured. Even then, I thought the concept of Not Me as a mischievous apparition was extremely amusing. And fitting. Who has never tried to deflect the blame from themselves when something went wrong? Or when you were indeed the cause of said wrongdoing?

Here's one of The Family Circus cartoons with Not Me...

In this one, Not Me seems to have brought some friends along to cause some trouble at the dinner table. So what is Not Me up to these days? Well, he seems to be alive and well here in China because that is who MIL blamed when we asked her about that missing cardboard panel with the roasting chicken picture on it from Raelynn's toy kitchen. I nearly choked to death on the last bits of my breakfast as I heard her tell my husband that Raelynn did it. While I'll concede that if pigs happened to be flying at that moment, then perhaps it could have happened. But this piece of cardboard needed to be wedged into the back of the oven portion of the toy kitchen, fitted into a groove. In other words, taking it out would take some work. In the month that we've had this toy kitchen. it's never been a problem. Sure, Raelynn breaks lots of things and causes lots of trouble (arguably more trouble than Not Me himself). But supervised or not, she has never even come close to dislodging that piece from the toy kitchen.

However this piece came to be removed (which I can almost guaranfuckingtee was not by the hands of Raelynn), my in-laws then let Raelynn run around and play with it. And watched her as she dropped it behind the couch. I just don't understand their thinking, perhaps in large part because I can't fathom being quite that stupid. Let's say for argument's sake that Raelynn, and not Not Me, somehow knocked out that piece of cardboard. Why in the fuck wouldn't you put it back together? And supposing you really are that fucking lazy to neglect taking 30 seconds to fix it, for fuck's sake, WHY in the hell would you let the baby run off with it and WATCH her drop it behind the couch and LEAVE IT THERE?!?!? Our couch is an "L" shape and is very easy to push around. These people cart fruits, vegetables and large containers of water up our 6 flights of stairs and also their 5 flights of stairs in their own building. In other words, they are not feeble (physically at least...mentally is a whole different story). Why didn't they just push the couch over and retrieve it?!? They are so, so, sooooooooooooooooooooooooo dumb.

Here is a picture of that missing piece, just before I took 30 whole seconds to install it in the back of her toy oven: 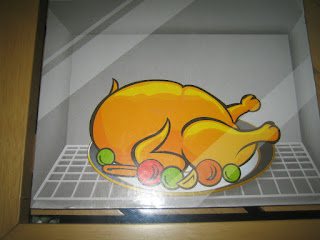 We can only hope that Not Me keeps from destroying this toy, or any of the other ones. Or any of Raelynn's clothes. Or any of our things. Grrrr...

Oh, and MIL (or maybe it was Not Me) left a lovely present for us in the kitchen: 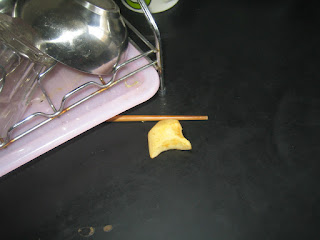 What is this, you ask? Why, it's a half-eaten piece of an apple that has apparently been sitting out for quite a while due to the browning. The chopstick under the drying rack just adds more irk to my jangled nerves. Here is a closer look at the apple piece: 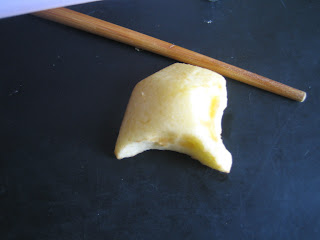 Yes, let's take some bites out of a slice of apple and leave it on the counter. Because someone else will want to eat it. Not! Ok, maybe Not Me would. But not ME. Ewwwww. Oh MIL! Why can't you go back to that one week when you were actually helpful and didn't break or ruin anything? When you made us wontons and surprised me by cleaning the kitchen (not in the way I'd have cleaned it but it was shockingly clean for someone like her). How in the world did my husband come from you? I'll add all this to the list of things that make you go hmmm...
Posted by JQ at 4:59 AM