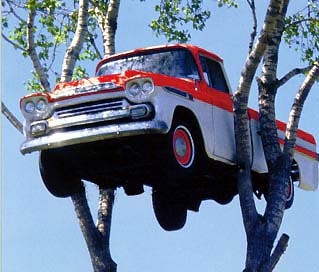 This picture is for illustration purposes only. While my husband definitely needs more practice operating a motor vehicle, this is not his doing, thankfully.


He did it. Jeremy bought us a car. He had been talking about it and despite my myriad reasons for why we shouldn't have one, he felt they paled in comparison to why we SHOULD have one. So here we are, the proud owners of a 2008 Chevy Aveo. Yes, he bought American, which is kind of cute actually. It's not bad though it is small. And somehow, the previous owner saw fit to remove the buckle part of the rear seatbelts so there is nothing to connect them and secure you into the vehicle. Jeremy also can't unlock the trunk with the key and if it wasn't for me, he wouldn't have figured out why the A/C wasn't blowing cold (he simply needed to push the big button that said "A/C" on it). But that's not the worst of our problems.

Raelynn was almost out of diapers, which meant it was time for us to head over to the Carrefour. It's only 2 bus stops away and has the best prices on diapers. In colder weather, it's actually a nice walk there. But this is summer and it sucks right now. It is so hot and humid and most people and businesses are too fucking cheap to turn on the A/C enough to make a difference. Almost every single bus in the whole city is without A/C as well. And yes, that means the buses are even smellier than usual because the concept of using soap is lost among the masses. During July and August, getting a taxi is damn near impossible because of all the tourists. But why walk, take the slow and stinky bus or stand on the side of the road flailing our arms about in attempt to hail a cab when all we have to do is take our own car?

To be honest, I was terrified of riding in the car with Jeremy. I think back to how brave my mom was when I first learned how to drive. I bet she will laugh when she reads this, as riding with my new-driver husband is payback tenfold. Oh yes.

It's not so much my fear for my own safety, which indeed I am fearful. It's more so my fears for Raelynn and keeping her safe. We don't have a child safety seat yet. Over here, no one uses them. You see kids crawling about in the back of cars all day long. Worse, you see people on motorcycles with no helmets and their infants and toddlers hanging on for the ride. Whenever I take a taxi, I have to hold her in my lap. It's not something I like doing but I keep praying these slowpokes will finish building the damn subway already. I think they have about a year and a half left on the construction of that thing.

Add my fears to Jeremy's own lack of confidence with driving and it was a very tense drive indeed. Getting to the Carrefour should take about 6 minutes. But it felt like 100 years. I did my best to keep Raelynn calm and quiet. From the start, she was screeching due to how hot it was. I had to show Jeremy how to make the A/C cold in the car. Once that happened, things were a little smoother though not much. I could see in his eyes reflecting from the rear view mirror just how nervous he was. I could feel the tension too. He drove slowly and doubtfully. I wished I'd told him to buy one of the automatic transmission vehicles he'd looked at. I just wanted to shove him into the passenger seat and take over. But I can't drive stick and in grand Jeremy-style, he wanted to save some money and buy the manual transmission which is always cheaper.

I tell him to turn after the buses in front of the Carrefour because it seems the parking is there and he coasts past it. Then he slows and grazes the curb, confused about how to get in there. He backs up (here, that is a normal move) and makes the oddest, most awkward turn into the Carrefour. There are big signs everywhere pointing to a parking garage. They are in English AND Chinese. So I can read them and I know he can too. Yet, he seems awfully perplexed by all this. Inside the garage, he is making the other drivers crazy by hovering in the way so no one can get around him. I try to patiently guide him but he's getting testy with me which is further stressing me out on this excursion. He doesn't seem to understand me when I tell him that the parking garage has many levels and he needs to turn around to get to the ramp. But by some incredible luck, the car in the first spot by the entrance leaves and we are able to take that spot.

Shopping at the Carrefour is uneventful. Unless you count Raelynn screaming bloody murder and wailing as we wheel her down the aisles or the stupid, ugly woman with bad man-style hair trying to cut in front of us in the line as exciting. Then it was back to the car. Jeremy was busy again in this devilish heat trying to unlock the trunk with the key. In the time he was monkeying around with it, I pulled down the backseats and loaded the big box of diapers and our bag of sundries into it, folded up the stroller and had Raelynn ready to go. He still couldn't manage to get it open, despite asking some older gentleman who apparently worked at the Carrefour. I love my husband but I get so annoyed when he does that - asks someone who also has not one teensy clue in their heads about something they can't help him with.

Now we're on the road again, leaving the Carrefour. Jeremy is driving even more slowly and the merry attitude he'd just had while inside the store has completely dissolved into nervous wreck again. I keep praying we make it home unscathed. He takes the longest way possible there, which makes me think he's afraid to make the left turn near the store where there is no traffic light and I can't say I blame him for that one. On this return trip, he stalls out the car no less than 10 times. Each time, I can feel him getting even more frustrated. I try to coach him along and tell him not to worry, even when a line of cars begins honking at us. "Take your time. Panicking and rushing are not going to start the car up. They will wait. Don't listen to them," I instruct him. He silently broods and keeps attempting to get us rolling again. And finally, we're off. He comes quite close to some other cars and I find myself holding my breath, then breathing a sigh of relief when we've passed them safely.

Finally, we make it to our building. Jeremy tells me to take Raelynn and the stroller and get out while he parks. I oblige, being delighted to be alive and home in one piece. My husband proceeds to attempt to park while I watch in silent embarrassment. He is backing up so slowly that it seems time has stood still as I stand there, rolling the stroller back and forth, quite sure that tortoises or even MIL could have walked back and forth across the street at least 10 times in this duration. And as he is backing up, cars keep coming and going, all of them honking angrily at him for being in the way. Even I'm getting bothered by how long he's taking to navigate this little car out of the road. Here, you park on the sidewalk. Of course, Jeremy chose the highest curb and was now bouncing the car's tires into it repeatedly with no success. Again, we got lucky. A man in a car across the street from the spot my husband was attempting to make his own pulled out. I holler to Jeremy to just take it since there is no enormous curb to roll up. All he has to do is roll into this one. Now Raelynn, the car and I all breathe a collective sigh of relief. That is until my husband began fiddling with the lock on the trunk again. I ran back over to him, nearly ramming him in the ankles with Raelynn's stroller and fished our stuff out of the trunk by dropping the back seats once again. I was in no mood to wait around while he cluelessly fiddled around with the car some more.

I am proud of him for trying, I really am. But I don't want to ride in the car with him again until he gets more practice. I think if he has a few more lessons, he will relax more and have the confidence he needs to become a good driver. Until you ride around with that driving coach again though, this is for you, my darling: 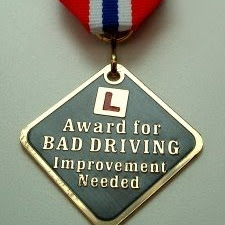