MIL is just on a roll lately with her path of destruction and mayhem. She tried to blame the baby for the missing cardboard chicken from the back of the toy kitchen. She keeps putting that same fucking knife either pointy-end up or into the tray of silverware with the forks, spoons and butter knifes. She even unplugged the refrigerator for no reason other than her complete and total lack of anything remotely resembling a brain in her dusty old head.

And she kept right on rolling with it this week too. She took Raelynn outside to play on Friday while we were at work. Which I've come to accept that now the troll will take my daughter places. We've at least come to an understanding that she dress her the way I want her to look, which means her clothing should be clean and MATCH. She should never attempt to dress Raelynn in something that she herself would wear. Oh no no. In summer, at least I don't have to worry about MIL putting too many clothes on Raelynn. But the woman clearly has no sense as she took Raelynn outside without putting the mosquito repellent on her. Or her sunscreen. Thankfully, she's not burned, but she DOES have tan lines on her feet from her little sandals. What kills me is there is a shelf in Raelynn's room that is filled with lotions, baby powder, diaper rash cream, nail clippers, mosquito repellent for babies and sunscreen for babies. Jeremy has shown his mother this shelf and further, shown her that the last 2 items (the repellent and sunscreen) are in English AND Chinese. So it's not like she couldn't figure it out because it was a foreign product or something. But I'm less mad about this now as when I showed Jeremy the big bug bite on Raelynn's hand and her new tan lines, he made a concerned face and nodded seriously. He'll make sure she follows that one. Raelynn's health and safety must come first.

Then, after the unplugging of the refrigerator, there have been some odd problems with it. It's a big double-door thing, very atypical of what most Asians, especially Chinese people, would own. A rich Chinese person would SO own this thing. The guys who brought this monster up our 6 flights of stairs really deserved double their earnings that day. We bought it a year ago when I first started my job at the kindergarten. The one my in-laws had in this house previously was much smaller. Too small really. People here like a small refrigerator portion and a larger freezer portion. I think I wrote about that thing already but I'm not sure which post it's in. Basically, the freezer portion was stuffed to the gills with frost-bitten meats of undetermined origins. There was no room to put any new food we bought, and it had begun leaking out the bottom. And that's how we came to buy this magnificently gigantic thing. Here's a photo (which I used in this blog at some point): 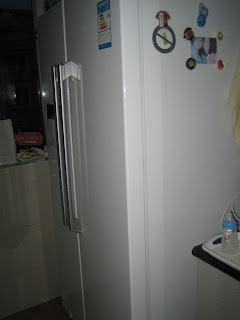 Anyway, on the left door, perhaps you can see a little screen. If you can't, take a look at a closer shot, from one of my posts regarding MIL leaving food out on the window sill instead of placing it into the massive confines of the refrigerator: 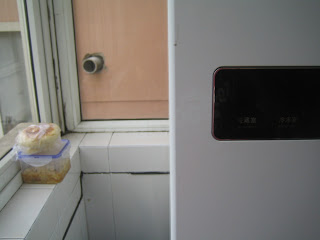 The screen tells you the temperature inside the refrigerator and freezer. It will blink on when you open it or if you bump into it. It locks so you can't accidentally change it. Ever since MIL unplugged this thing, it first FROZE all of the food on the refrigerator side. ALL OF IT. We're talking all the vegetables (try cooking with a giant block of frozen fucking mushrooms or just try to slice open a frozen-solid lotus root...go ahead...I triple dog dare you!). All the fruits. All the leftovers from the night before. Even my precious few remaining slices of Gouda cheese. Not just slightly frozen either. Jeremy was talking to his mother about this problem before I left for work the next morning. As I ate my breakfast, I heard him tell her he was looking for the phone number for the manufacturer (Hisense, very helpful folks incidentally) and he explained to her why. I heard her, no joke, say: "That's bad?" In Chinese: "Bu hao le?" OF COURSE THAT'S BAD YOU MORON! Not everything needs to be kept THAT cold!

Thankfully, while we were working, someone from Hisense came over and fixed the problem on the fridge. And it was fine. Until this morning. I noticed it said 19 Celcius for the refrigerator part. We had to call Hisense again and once again, they were great. This time, they were able to tell Jeremy how to handle the problem. Now we're hoping this is the last of the refrigerator's shenanigans.

And then last night, there was the discovery that something else had been broken by good ol' MIL. Our water pump on our giant water jug. Before you see the photo, I should explain that Chinese people think those upright water dispensers that you invert your giant jug of water onto are dirty. This cracks me up for so many fucking reasons, you just don't even know. One of them being that EVERYFUCKINGTHING ELSE AROUND HERE IS DIRTY and they don't seem to mind that. Public bathrooms with piss and shit all about and no soap? No problem. But water out of a dispenser? Oh now that's just filthy.

Anyway, they are also 'expensive,' according to my husband, but sometimes we vastly disagree on what is expensive and what's not. So he bought this thing for our water jug, which I actually don't mind. It gets the job done (though I fail to see how this stays any cleaner than a big water dispenser): 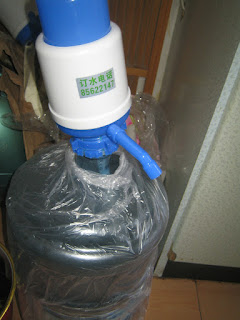 This is actually the new one that our water guy brought today. We'd called last night but of course, since it was after 8pm, we didn't expect him to be bringing it then. The old one is already in the garbage and just looking at it, you couldn't tell it was broken. Do you see the big blue part at the top? You push on that to pump the water out. Pretty simple. Well, somehow Dumbo broke that part because it wasn't working. My husband, determined to show me I was somehow using it wrong, gave it a try and realized the same thing: his insipid mother was the last person to use it, broke it and said NOTHING to anyone. Now, I know my Chinese isn't the best, but I would have understood her if she'd pointed at it and told me the Chinese word for 'broken.' She didn't tell me that. All she told me when she left yesterday was that my husband had given her money and blah blah blah blah blah blah (the blah blah blahs are for the Chinese I did not understand at all, which later, when I told my husband, he explained that those blah blah blahs I'd heard were her telling me he'd given her money to go to the market to buy us shrimp and some other items). BUT she didn't even call my husband to tell him about breaking our pump! I'm sure she didn't mean to. Plus, things that are made in China always break (just like they do in the states). But still, it just pisses me off that she has no sense whatsoever to call her son and say, "Hey, I'm so sorry but when I was pumping some water from the jug, the pump broke and you need a new one. Do you want me to have your father go pick one up for you now, or can you deal with it later?" She could have called her own husband too. Or the water guy himself! She knows the number! The pump is only 15 yuan, which is extremely cheap. It's not like we wouldn't have given it back to her. Sigh. I just don't think I will ever understand what goes through her head. Maybe it's an endless swirl of dust and tumbleweeds. I once hypothesized that it was 2 monkeys picking fleas off each other but that might be one step up from her.

And one last thing: she opened the window yesterday WHILE the A/C was on! I should mention it was so disgustingly hot out that it was nauseating. The humidity was atrocious. UGH! Ok, ok, ok...now I'll say something nice: at least she did make the most delicious wontons ever when I was sick with a bad stomach flu earlier in the week so that I didn't have to cook when I came home from work. She should totally make more of those. That would help me be less annoyed with her. She better get right on that then.
Posted by JQ at 9:08 PM