OMG! It's Another Jeremy!

Early this evening, after Jeremy had returned from his one-day/one-night seminar in Jinan, he'd promised to take us anywhere. I'd been feeling like having Thai food for so long and since he said we could do anything I wanted after having been subjected to a squealing toddler for over 24 straight hours with no reprieve, I suggested a Thai restaurant we'd seen a few months ago but hadn't yet tried. "The Thai restaurant by Carnegie's," I say. Fortunately, he knows what I'm talking about. He damn well should. A month or so ago, we were having lunch with my friend Andrea when, I shit you not, the following conversation took place:

It was at that point that Andrea burst into laughter because she thought he had to be joking around. But he wasn't. I know, I know...English is my husband's 3rd language but he does this a lot with words and things that I know for a fact he knows well. So we teased him about it until he laughed so hard he cried.

So yeah, Jeremy knows what Carnegie's is. But now he protests the cost of this Thai restaurant before he even knows what is on the menu. "Why don't we just go and if it's too expensive, we can eat at one of the other restaurants there?" I say, growing annoyed. After all, he's the one who told me I could pick whatever I wanted. Fucker's lucky I didn't demand he take me to the Shangri-La! He makes up a dozen excuses and then finally, when he's run out of them, decides it's not a half-bad idea and off we go.

It's our first time driving there though. Jeremy does a super job on the way there. Until he turns into the parking plaza for this restaurant and bar courtyard. Parking? Despite my telling him to stay to the right, he goes to the left where there is a BIG sign on the arm that blocks the path out indicating that it is the exit. Above, there are signs IN CHINESE that further elaborate on the pictures. Signs? The parking guard though is quite amiable and amused and instructs my husband to please back up and proceed through the entrance.

This courtyard is filled with restaurants, bars, billiards clubs and spas. It's really quite lovely and with the exception of Chinese signs all about, it makes you forget you're even in China. The weather was a little cooler too. A nice summer breeze was blowing through and for the first time in weeks, the air wasn't humid and sticky. Raelynn was certainly enjoying her ride in the stroller. We get to the Thai restaurant with an entrance that's flanked by two golden elephants. I tell Jeremy we should take a quick look at the menu to see if it's too expensive but he just allows them to lead us to a table. It was so pretty in there! But I soon felt a wave of disappointment. I should have just let Jeremy take me to the more Malaysian-than-Thai-style restaurant we've been to a bunch of times. The food is really good there though it's not wholly Thai. But no. I wanted to try this other place out. The menu looked like an overpriced offering of Chinese-ified Thai dishes. Where was the Pad Thai? Curry? There was some sashimi on there which was incredibly puzzling to me. We politely got up and left.

Next, we poked into the Spanish tapas restaurant which had also looked interesting. Despite a really lovely-looking menu, it too was overpriced. That's when we decided to go to Carnegie's, the place Jeremy will never, ever forget now. It was a great decision. We got mounds of food for a great price. And we got this adorable photo of Raelynn eating a french fry: 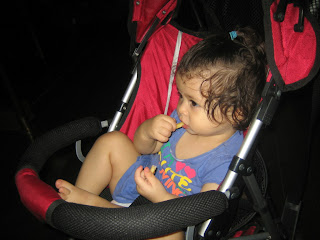 After our meal, we headed back to the car. And that's when I spotted it. Just 3 spots away from our car, there was another Jeremy-driver. The car had the same 'shi xi' practice driver sticker on it as our car. Take a look: 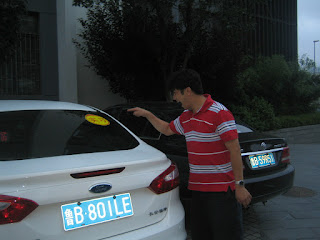 Jeremy shouldn't really be laughing since he still has much to learn but I found it quite amusing that there was another newbie driver just a few cars down. Here's a closer look at the sticker on the other car: 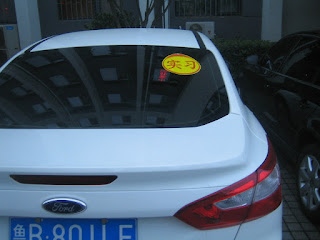 So, this of course means Jeremy is not the only beginner out there. Not that it's shocking news or anything. It's just amusing to see it advertised openly. I should add that here, they use "Baby On Board" stickers. It boggles my mind since not very many people speak English here, let alone READ it. And every "Baby On Board" or even "Baby In Car" sign is in ENGLISH. Just like this sign wouldn't mean shit to you until you read my explanation about what it means, I bet the baby signs mean nothing to the other drivers. Hell, they'll probably take aim. But a shi xi sticker? Better back the fuck off, bitches!
Posted by JQ at 6:30 AM