Last week was really hectic. Our new English teacher started, taking over for Jon, my old work BFF, who taught the 6 year-old class. Cedric, the new guy, was a splendid choice. Not only is he doing an awesome job with the children but he's also totally cool. Plus, his wife is due with their first baby in early June and she might actually be the one who will take over for me. It would be ideal.

Anyway, in addition to helping guide Cedric with the weekly teacherly tasks and such, we also had Science Week. For all previous years, we had a Science Day. This year, Christina wanted to make it a week of science. It sounds like much more work but it wasn't. Each day, I had developed a new topic for the teachers to discuss with their students. Every teacher had the freedom to choose HOW they would teach the topic to their students.

The one thing that stayed the same was having the children create some sort of science-related display. Even Raelynn had to do one. 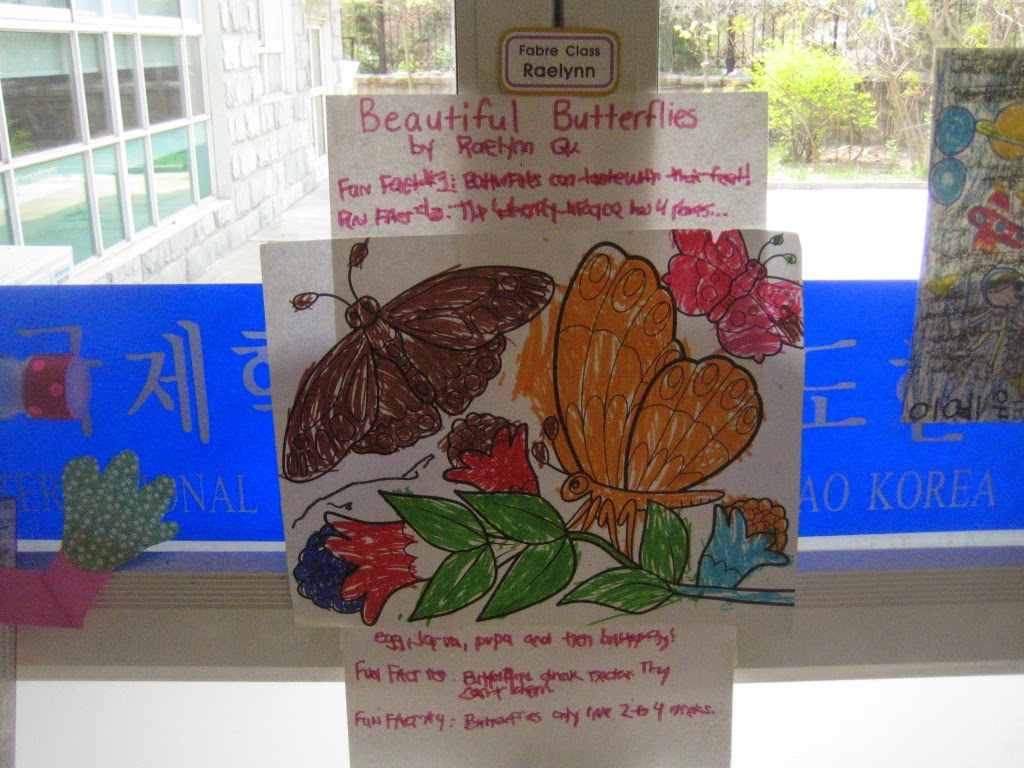 Well of course I helped her! She can't write by herself. But she chose butterflies as the topic. She colored the picture and then I sat her down in front of the computer and Googled butterflies for her. I read to her some cool stuff about butterflies. Then, I picked a few of the cool things we learned and wrote them out for her. After that, I traced the title and turned her loose on tracing everything else. She really loved doing it and wants to do more science projects. 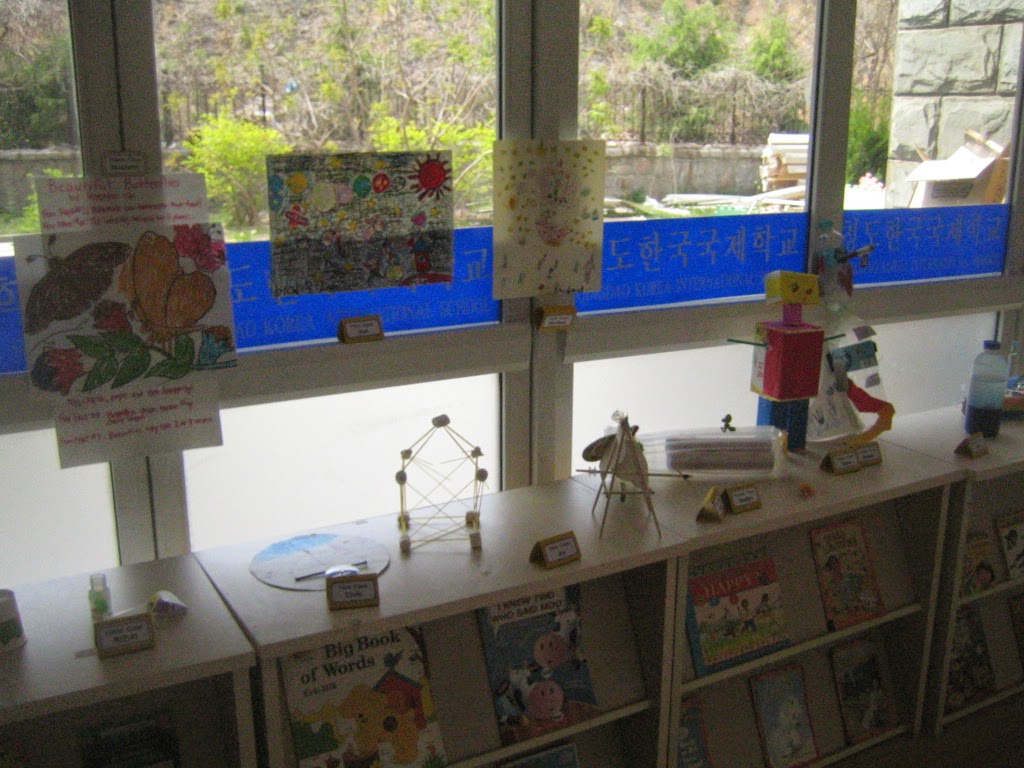 Here's some of the other ones. It's not as exciting as last year, but I attribute that to less kindergarten students this year. Also, we had some students that didn't make anything. Bums! Ha!

There were some odd things this year too. One of them was created by a girl in Raelynn's class. It is just a box with snacks taped to it. Have a look see... 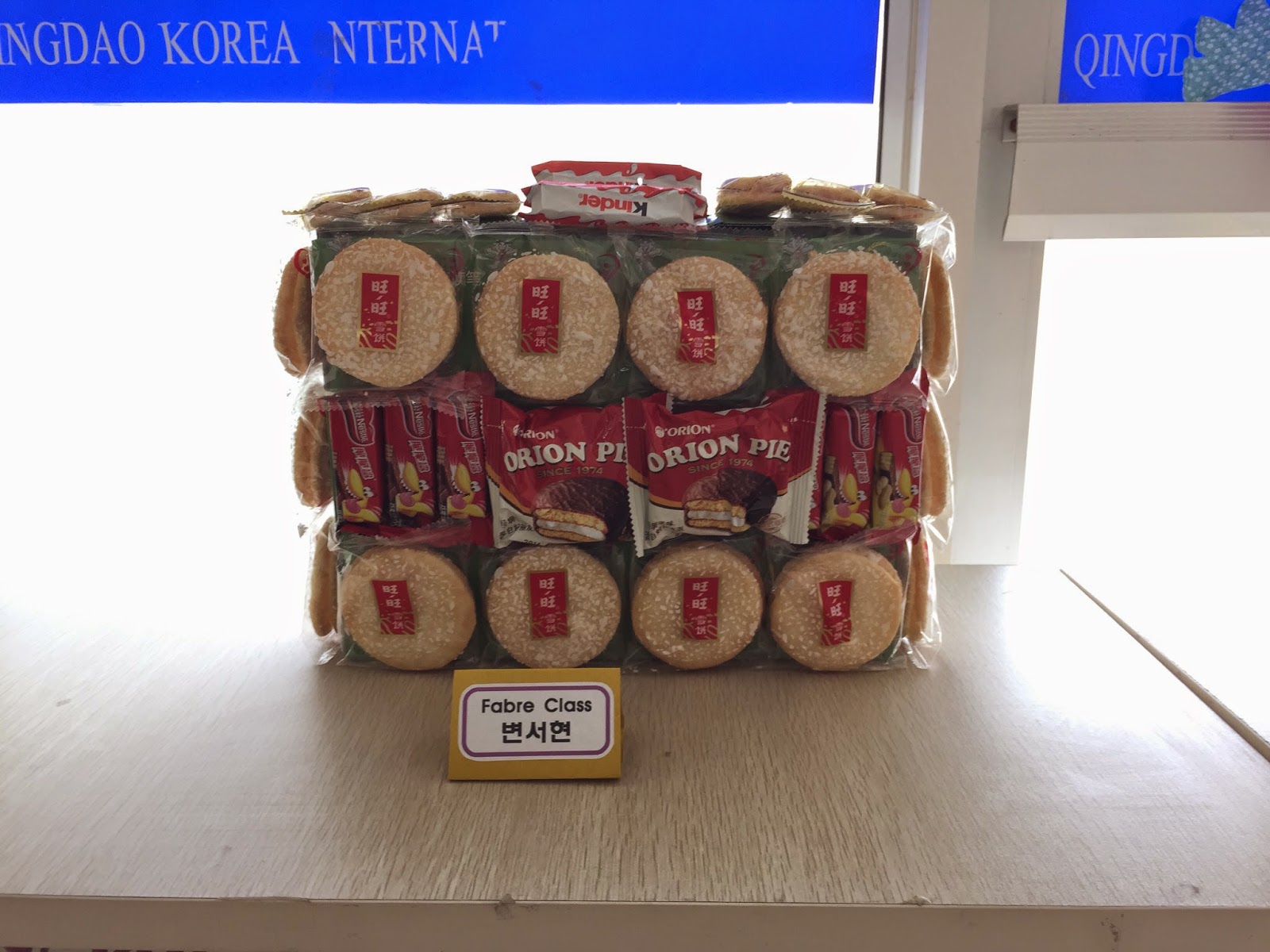 A big thanks to Cedric for taking this photo and the next ones that follow. What is up with this so-called science project? Snacks taped to a box. With no explanation. We theorize that perhaps wee Elin wanted to see how long it would take before 1) mice came to eat it, or 2) one of the other children ate it. It turned out to be the latter, for we found some of Cedric's students had creeped off the chocolate that was on the top.

Being punished for that didn't stop them from continuing to do so. Or from attacking another not-so-scientific science project. 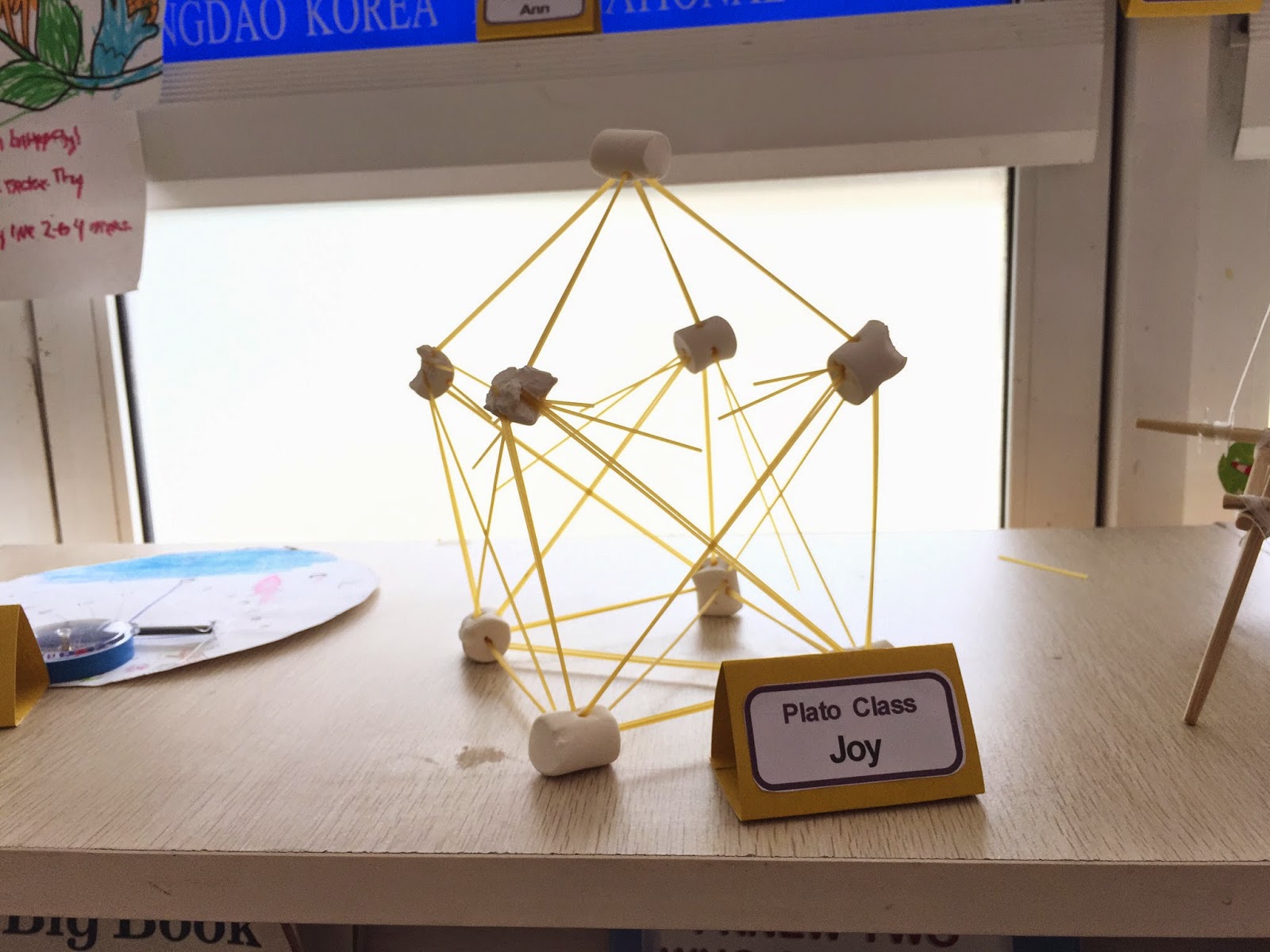 Joy, who is a lovely girl in my class, made this structure out of uncooked spaghetti and marshmallows. I have no idea why. I cringed when she gave it to me though. Do you know why? Because my first thought when I saw it was "bugs." I wondered just how long it would take before bugs would begin to tuck into this. My second thought? "How long will it take until one of the children pilfers the marshmallows?" Well, if that was her intended experiment, then I'd like to report that it took precisely 1 week. It would have been sooner if not for Elin's snack shack. 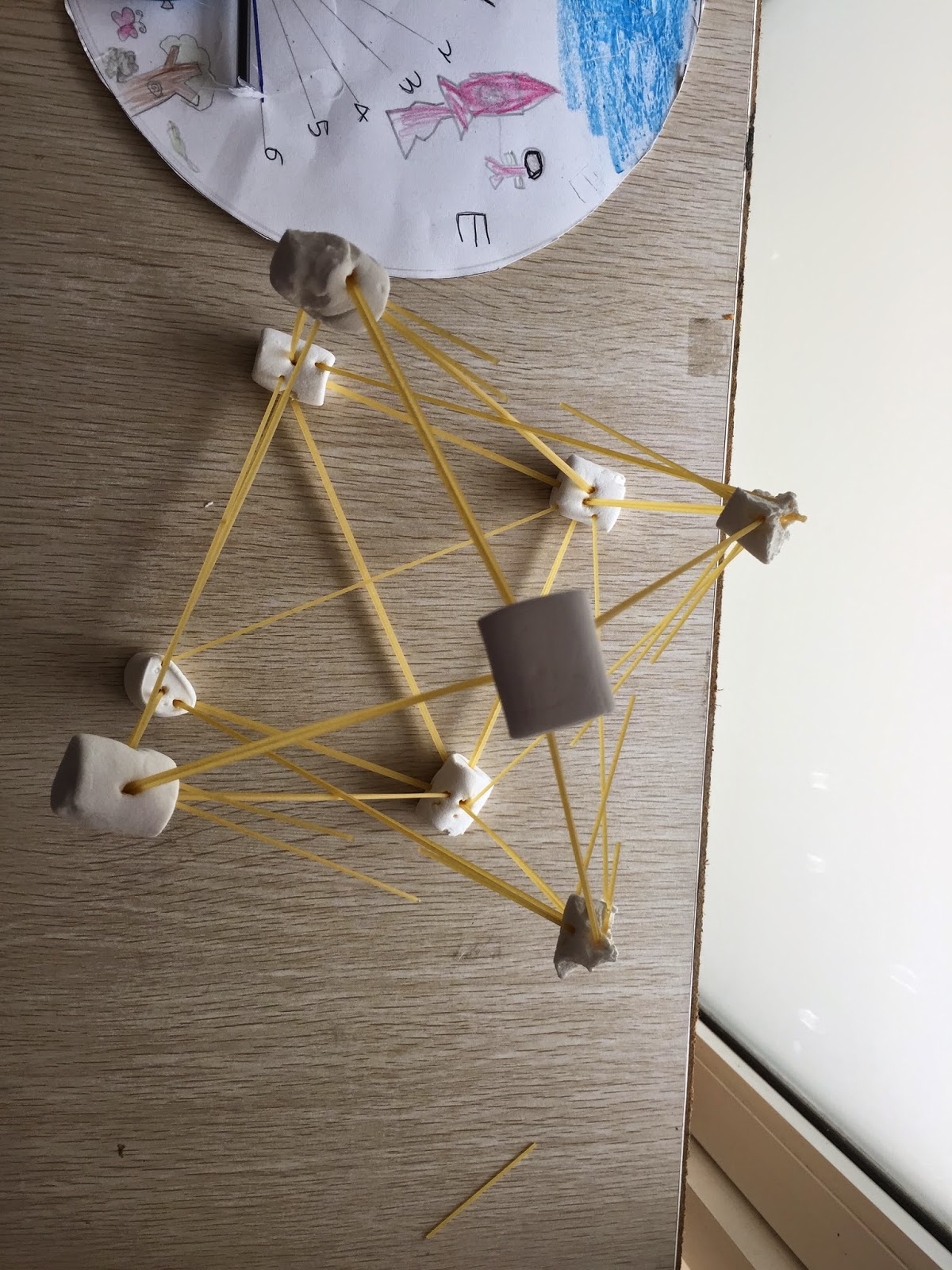 If you look more closely, you can see someone has taken bites out of the marshmallows. That someone was Alex. Boy did he get in trouble for that! 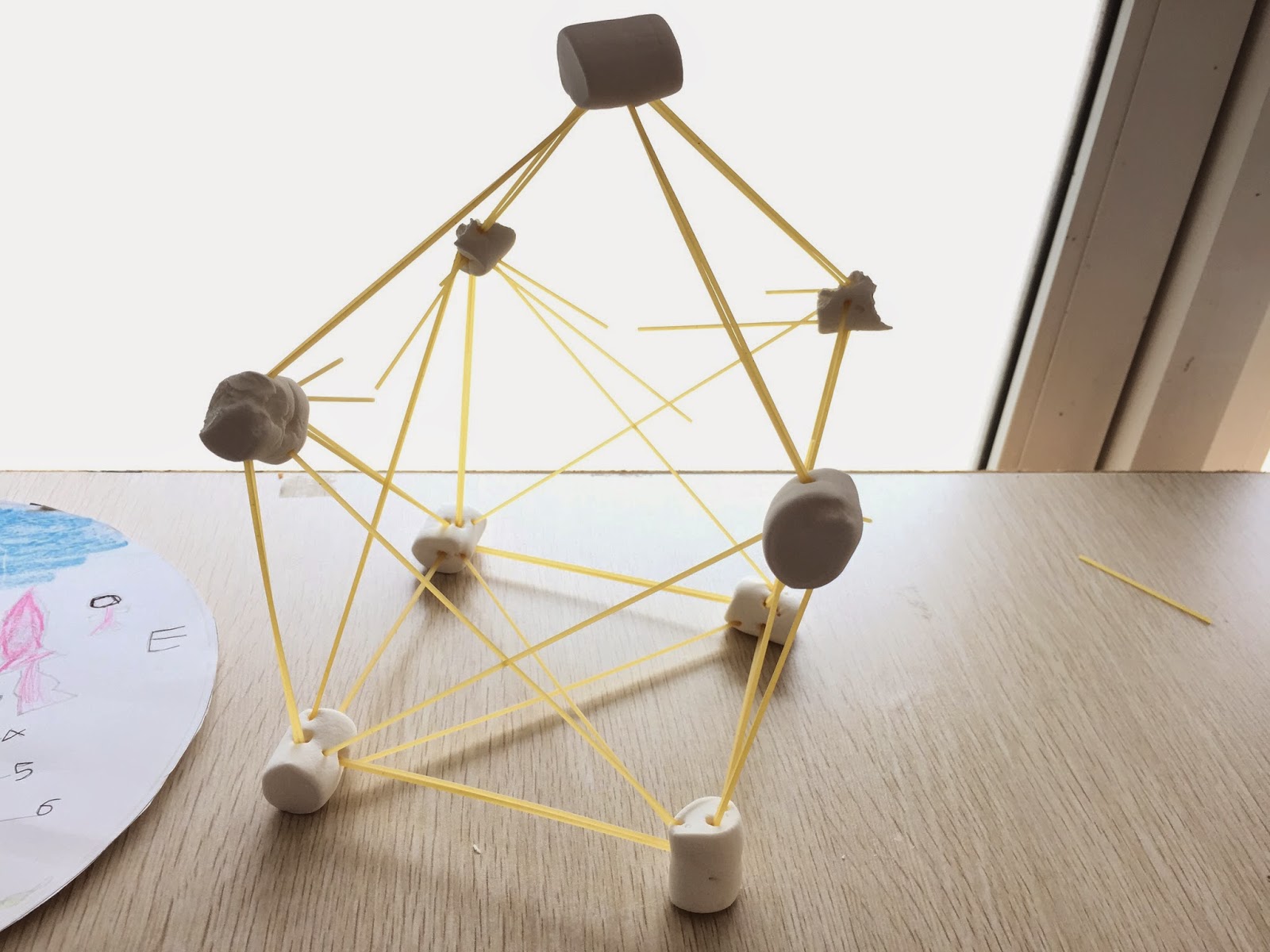 I already warned Cedric that next year when Science Week rolls around again to gently remind the parents not to use anything edible or else I'm sure he'll be emailing me more photos like this.
Posted by JQ at 3:48 AM