How Hard Is It? 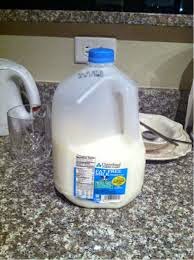 Image comes from here, a Chinese Roommates tumblr which is cracking me right up though sadly doesn't seem to have had a new post in a while.

The same stupid thing happened in our house in the same week. The first time this idiotic incidence occurred, it severely irked me. But twice in one freaking week? I'm mega-irked now.

We buy imported milk here. Always have. Even Jeremy doesn't want to drink the Chinese milk since you never can be sure what's up with it. Plus, imported just tastes better. Of the imports, we purchase what is on sale. Sometimes it's from Australia. Other times, it's from Germany. And sometimes, like this time, it's from Italy. The milk is shelf-stable until opened, at which point, it must be refrigerated. We usually keep unopened ones in the fridge too so that they are nice and cold when needed.

The first time this happened this week, we left the milk on the table for Jeremy, as he usually requests us to. He uses it shortly after we leave since he doesn't have to go to work until after we've gone. Normally, Jeremy is good about putting the milk back. Annoying as it is, I can forgive one slip of the brain in forgetting to return the milk to the fridge. What reignites the rage inside of me though is that MIL is here ALL day with the baby. And she leaves it out on the table. Because. Because she's a fucking halfwit. I mean, really!

But still, I tried to forgive her too. I sent Jeremy a stern message via WeChat and he promised he'd be more careful. And as for MIL? I snarled at her in Chinese to put milk in the refrigerator. I figured they'd both pay more attention after that.

You'd think so, wouldn't you?

But of course, men are idiots who do stupid things so it is no surprise my husband found himself in a rush and forgot to put the milk away when he was done with it. And MIL is a total moron, so should I be surprised that when I came home today, our lovely Italian milk was STILL sitting on the table? No, I shouldn't be. Just like she shouldn't be surprised when I get angry at her lack of attention to detail. Or anything, really.

At least I can find solace in the fact that we're leaving in 2 months and after that, it will be a long while before MIL can ruin our dairy products. WOOHOO!
Posted by JQ at 4:36 AM

Email ThisBlogThis!Share to TwitterShare to FacebookShare to Pinterest
Labels: Major Rant, Oh Come On!, Stupid People, Thanks For Nothing, This Is Why We Can't Have Nice Things, Yuck