Please Don't Give My Kid Candy 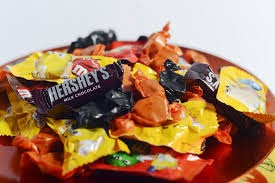 It's not that I'm opposed to candy. Hell, I love the stuff. Especially chocolate stuff. Oh man. And I surely don't mind Raelynn having some of it here and there. But if you read my post from yesterday, you know I don't want Raelynn getting any kind of treat when her behavior is bad. Unfortunately, other people are just as clueless as my FIL on this matter.

It never ceases to amaze me how many Chinese people can try to butt into something that doesn't concern them in the slightest. People on the street will come running up to us to tell us something idiotic about our children. When Raelynn was a tiny baby that couldn't even walk, a man ran across the street to tell me she wasn't wearing shoes. Yeah, no shit dumbfuck. I dressed her. She's A BABY. She can't walk yet. She doesn't need shoes. She's got thick socks on her feet to keep them warm and toasty.

But it doesn't end there with people telling you how to dress your kid. And by the way, no matter HOW you dress your kid in China, some fuckface will come up to you and tell you your kid is too hot or too cold. Yes, because YOU know what MY kid needs. Hey, I know what you need...a throat chop. Get lost! Yeah, people here are beyond nosy. I'm sure they're trying to be helpful so maybe I should cut them some slack but I am soooooooooooooooooo sick and tired of the stupidity here. I find myself shouting "Serenity now!" like George Costanza's crazy father in Seinfeld.

As promised, FIL didn't come to wait at the bus drop-off today. I tried to keep Raelynn from falling asleep on the bus but my efforts were all in vain. She was cranky when I woke her up, willingly flopping herself on the floor of the bus aisle and crying like a baby. I shout at her to move it or she's in for it and she miraculously obeys, though continues the crying. We're the second-to-last stop. A Chinese teacher gets dropped off last. I forget her name but she's wonderfully nice. She's helped me out before when Surly was, well, surly.

She and I were also pregnant at the same time. She had her first child, a daughter, 3 months before my Seoul was born. When I came back to work, we happily showed each other gobs of photos of our tiny babies. I generally like this woman. But today, I did not like her. Not one bit.

As we make our way to the front of the bus, Raelynn wailing away like the drama queen she often is, the Chinese teacher says, "Oh no! Don't cry! Have a piece of candy!" And I stop her. "Uh, no thanks. She doesn't need candy right now. She's not being very good," I explain. And I keep moving with Raelynn toward the exit and the Chinese teacher, who has understood exactly what I've said (her English is very good) tries again to give her the candy. "No," I say even more firmly this time, "She doesn't deserve candy for acting like this," and I physically have to push the candy away from my daughter before we get off the bus. Raelynn cries for about 2 more seconds and then promptly stops. We walk home and she behaves. She walks all by herself without me carrying her. She even carries a bag of sweet potatoes from our field trip to the ultra-lame potato farm (please don't ask, but if you're a friend of mine on Facebook, you can see the photos there).

I'm furious that people try to undermine my parenting here. FIL. People I know from work. Strangers even. Is everyone here really truly that socially awkward? Maybe I'm the one that's crazy but if a child's parent told me their child shouldn't have any candy, I wouldn't press the issue. I would stay out of it. Jeremy's even had enough of it. Not too long ago, Raelynn threw a fit at church and he took her out of there while I was outside the auditorium with Seoul. As I followed them, a Chinese lady and her small son followed, all the while the woman is telling her son to tell Raelynn not to cry. Seriously. People here just don't get it. It's no wonder children here are terrible. Why wouldn't they be? No one stops them from behaving like monsters. Oh she's crying, and not because she's hurt. She's crying because she didn't get her way. Here, let's give her a treat so we can reinforce that rotten behavior so she always acts like a jerk and cries for more candy. I'm sure she'll be a well-balanced adult. Yessssssssss!

I seriously think everyone needs to read this article about raising a generation of helpless children. Because it's true. Especially in China. I want to stay in touch with this Chinese teacher when we move. I want to see how her daughter behaves when she's Raelynn's age. It doesn't take a genius to predict that the girl will be a total brat thanks to her grandparents spoiling her and her own mother awarding her candies when she fails to obey her requests. Get ready for it!
Posted by JQ at 8:34 AM