I was so excited for today. Jeremy had told his mother to leave us be for the Chinese National Holiday. Of course, she refused to take the hint and sent her husband over with roasted chicken later this evening, long after dinner, but that's a whole other story.

This story is about how we decided to go out for a picnic today. We packed up a bag filled with sausages, cheese, bananas, cookies, water, Cracker Jacks, marshmallows, and some mini candy bars (those last 3 things courtesy of the amazing package my folks just sent). We grabbed a big mat and a frisbee and hit the road. Before we left, we discussed where we should go. I'd suggested the vineyard out by the mountain as well as Sculpture Park, which is on the beach right near my school. Jeremy thought the vineyard was better because it's really pretty there and he was worried the beach park would be too windy.

So off we went. Our GPS on Jeremy's phone kept shutting off. So each time, Jeremy pulled over to get it fixed. Finally, it was talking again and as we were driving down one road gabbing away, BAM!

The glass on the window next to Raelynn shattered and the car spun in a circle. Raelynn screamed and I did too, once I heard her screaming. I was terrified she was hurt. I knew what had happened. I'd been hit by a drunk driver 13 years ago and remembered the scary feeling that car accidents tend to bring. I was lucky then and today, I was even luckier. Because my beautiful children were with me and they were both fine. THANK GOD.

Jeremy and I were fine too.

But before we knew that, Raelynn was now screaming and crying. She was scared to death, reaching for me. I unbuckled her and held her in my arms along with Seoul, who had been sleeping until this all happened. Now she was crying too. It's then I notice Raelynn has a small mark on her face. We get out of the car and I see the other car. Two young women are inside. I shout angrily at the driver and she cowers. She looks even more ashamed when she sees our 2 children. She should be ashamed. She t-boned our car. We definitely have a guardian angel. 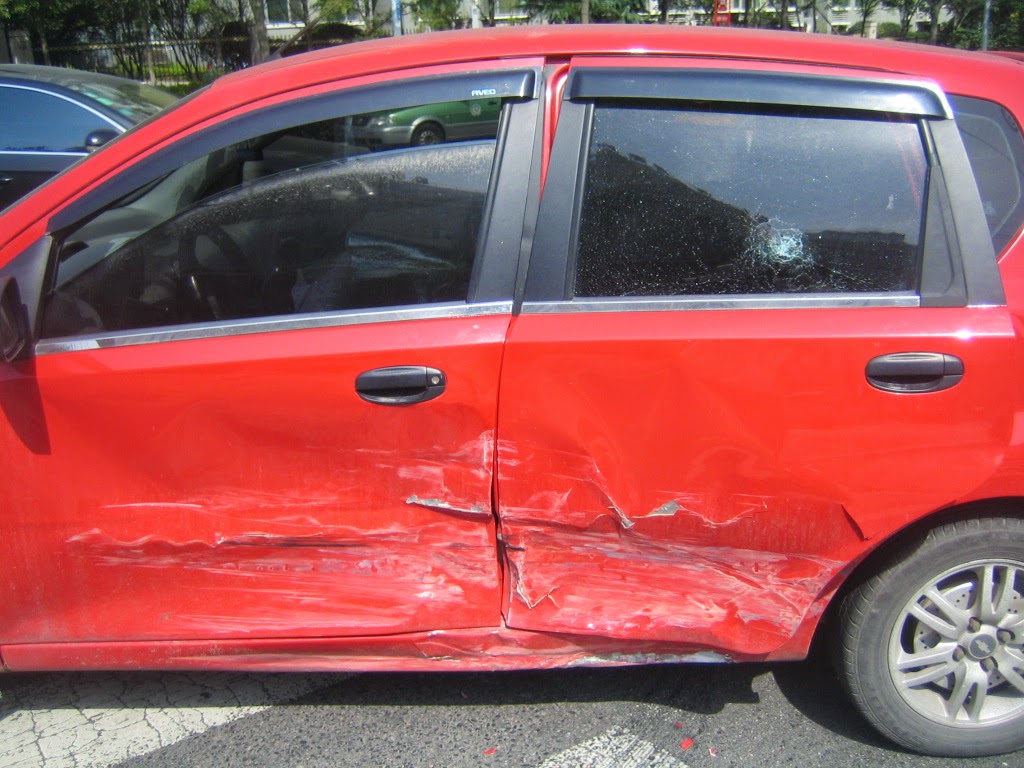 Here's our car after the accident. 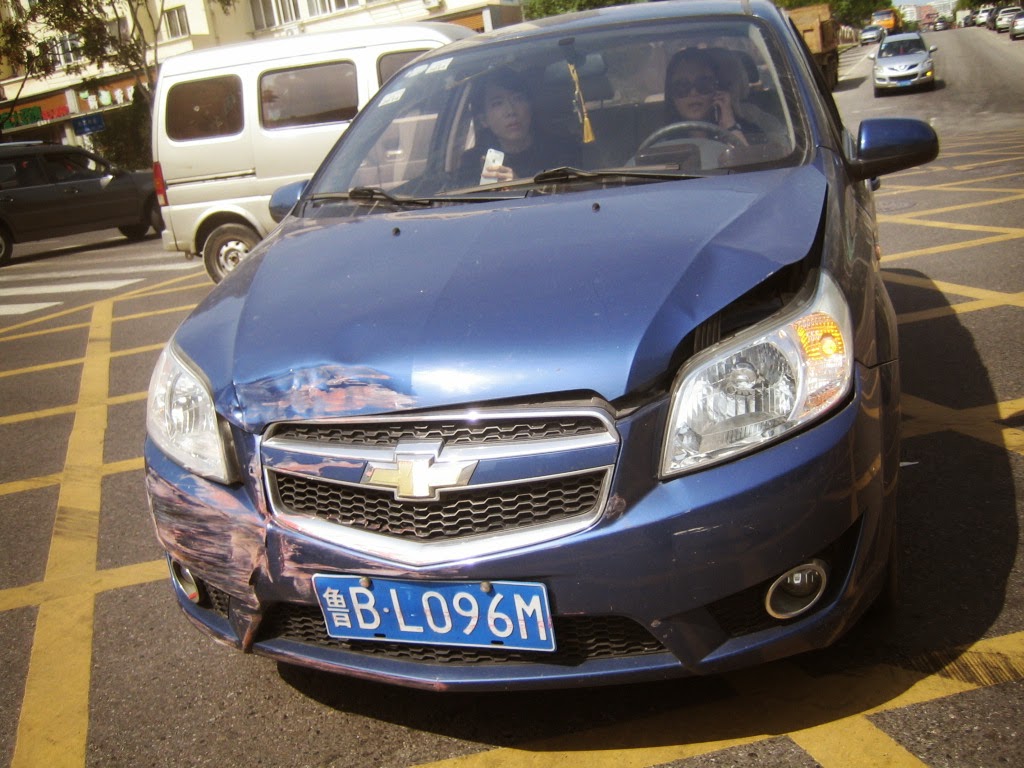 Here is the other driver's car. Jeremy took this right after it happened so she's sitting in the car with her friend calling the police.

Speaking of the police, it took them 40 minutes to come check out the accident. Seriously. 40 minutes. Only in China. 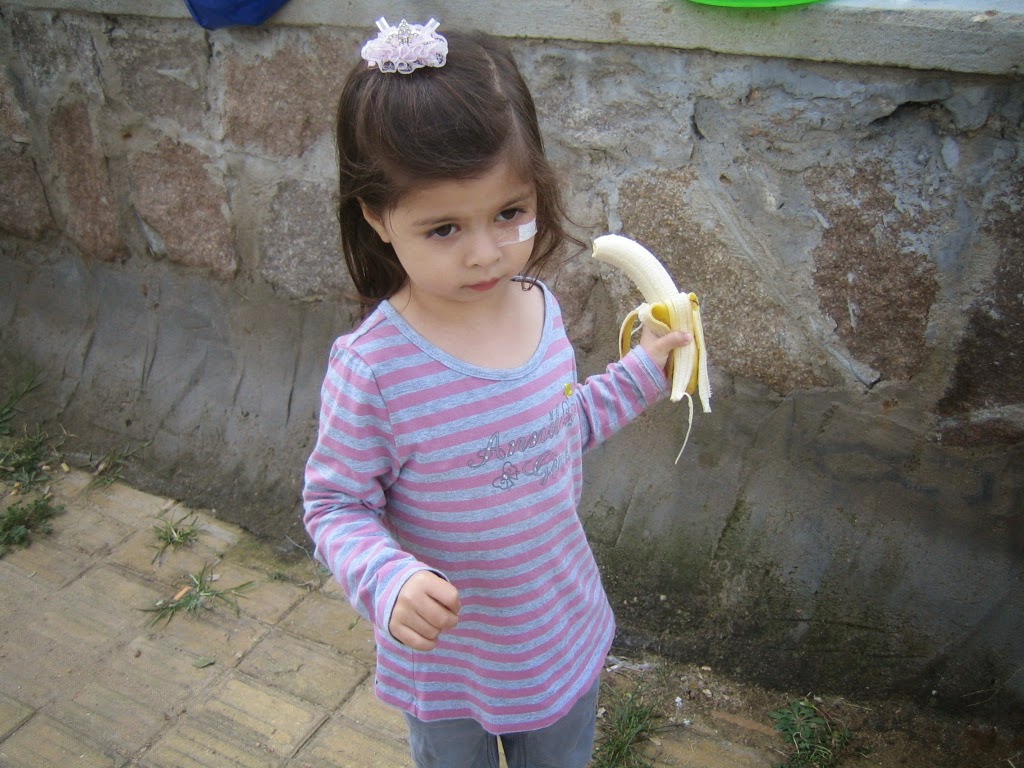 It was a good thing we'd packed for a picnic. Because as we waited on the side of the road, Raelynn became hungry. You can see her booboo as she eats this banana. Jeremy had run to a nearby store to get her a band-aid. Poor Raelynn! 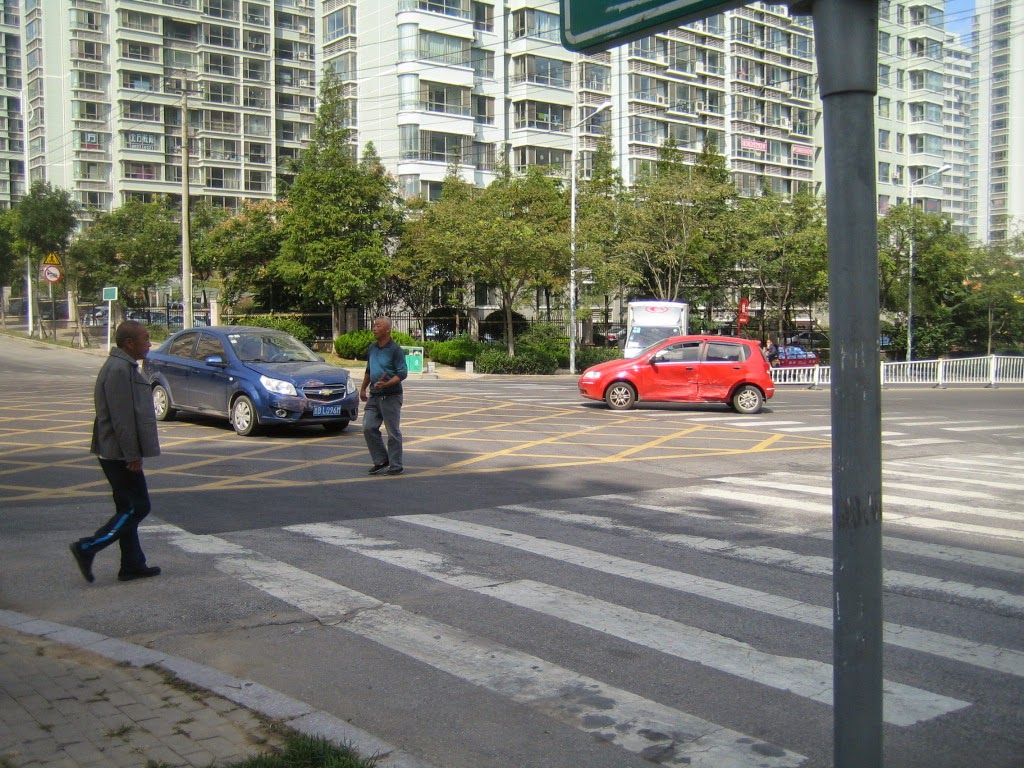 Here is the intersection where the accident took place. This is how our cars wound up. She hit us so hard we spun all the way over there. She was looking for a street and not paying any attention. She was also going over the speed limit.

While we stood there, a man who happened upon us shortly after the accident offered his vehicle to us so Raelynn could sit down and so I could breastfeed comfortably. We were sitting on a wall. We politely refused. He bought us water and a small toy for Raelynn and he stayed until we were leaving to make sure we were ok. It's nice when you meet people who are that kind. I was beginning to think there weren't any of them left.

Raelynn cried a lot but mostly because of the car. "My precious red car got smushed!" she shrieked. She was more worried about the car than herself.

The good news is we're all ok, though we're keeping an eye on the children just to be certain. The woman who ran into us and her friend came with us to the hospital and took care of the fees for checking out both Raelynn and Seoul. She'll also be covering the costs of repair to our poor Aveo. At least it is fixable though.

It was a lousy day, but it could have been a whole lot lousier. We're just thankful it all worked out and we hope tomorrow is a better day. We'll take the bus.
Posted by JQ at 6:58 AM