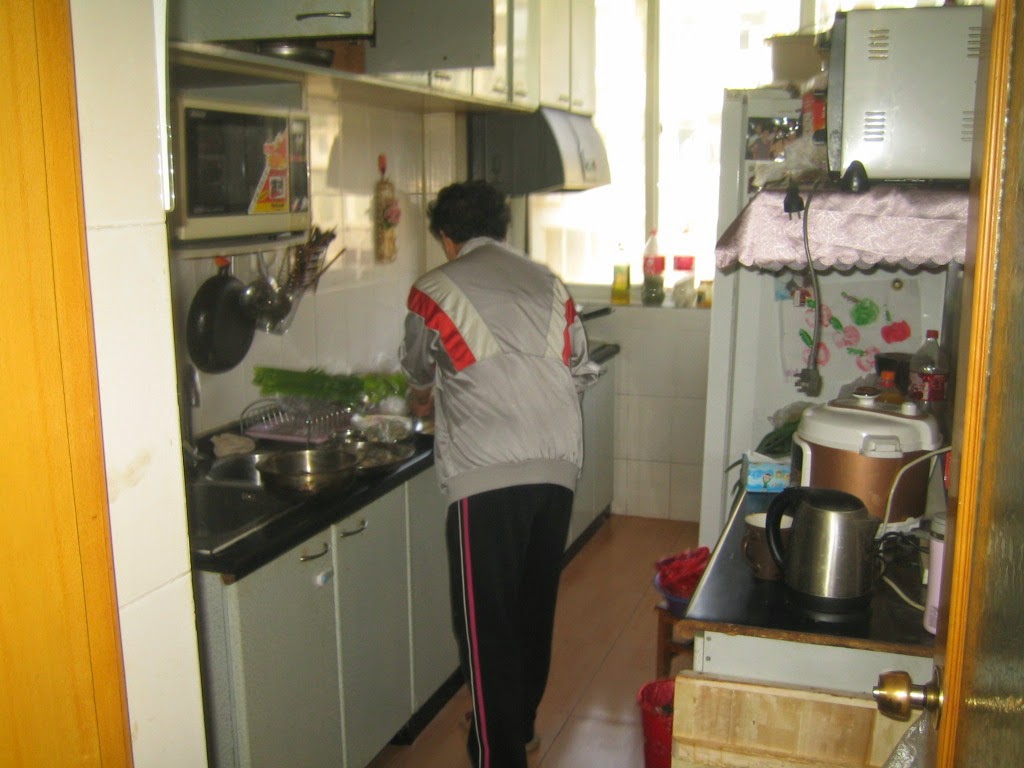 Though no one is quite as strange as MIL. Here she is destroying the harmony in my kitchen, yet again.

Some days, I feel like I'm finally getting used to China. Other days, I feel like it's still as weird as ever. Yesterday was one of those days that showed me though that it's just as strange and as normal as I perceive it to be, all at the very same time.

We went for our 24-week check-up and left Raelynn at home with MIL and FIL. Usually, we have a great experience at our hospital. Our doctor is great but she's not the one who does the ultrasounds. We saw her and she checked me out first, telling me I'm looking good and baby seems to be growing just fine in there. Then we went and got on line for our ultrasound. When she left for lunch, she was surprised to see us still sitting there. My husband actually got up and screamed at the doctors in the ultrasound room because they were taking so long. I had turned in my slip to hold my place well before one woman who just walked right in and that set him off. Rightfully so. Across from us in the waiting area was a couple that consisted of a very fat man and his very skinny wife. I figured she must have been in the early stages of pregnancy. Or a child bride. There were some other women that looked genuinely pregnant but a couple were as tiny as this woman. What bothered me about this couple though was that, unlike all the other wives and husbands waiting their turn, these two were whispering constantly. Maybe it was all innocent flirtation between the two of them. Or maybe they were talking about the foreigner sitting across from them. That's happened to me more times than I can count. But whatever they were talking about, I found their behavior quite rude. I wasn't the only one. The other people waiting there shot them dirty looks as well.

Finally, it was our turn and when we went into the room, there were 2 doctors there I'd never seen before. Maybe this is why they were slow. The one doing my scan was very nice but the other one was really rude. My husband got her name from her name tag and made sure to tell our doctor how impolite she was to us. We were stuck in the room with the crappiest equipment. It doesn't have a TV on the wall where you can see what's going on inside your uterus. The doctor said after she checked out the development of our baby, she'd be happy to turn the monitor toward us. When she did, we were in for a treat. Our little angel was sucking her thumb! It was so cute, and it reminded me of when Raelynn did the same thing at one of her scans.

After our ordeal at the hospital, we hurried off to Carrefour on Hong Kong Road. Which I should add has much nicer bathrooms than the one on Shandong Road. I say this because in this post where I wrote about the worst bathrooms in Qingdao, I had wondered how the bathrooms were in this Carrefour location. I'd never had to use the bathroom while in there and now, hitting my 6th month of pregnancy, I had to pee as soon as we got there. Sure, it still smelled like most Chinese public restrooms but it was actually somewhat tidy and there was soap - a novelty in public bathrooms here, as my husband says because most Chinese people feel that rinsing your hands quickly under cold water is sufficient. Gag.

On our drive there, we'd marveled at all the tourists walking along the boardwalk by the sea. Already, they've come to invade the city. GO HOME! I asked Jeremy to teach me how to say "go back to your hometown" in Chinese which made us crack up the whole way to the Carrefour. I yelled it out the window a few times for good laughs though I had to just ask Jeremy what the phrase was again because I couldn't remember (incidentally, if you feel like shouting that out your car window, it's "hui nimen lao jia ba").What I could remember though is my husband's suggestion of having his parents come with us so we could all go to the beach after the ultrasound. Oh yes. Because all I want on my 3-day weekend is to spend one of those days with those clowns. I'm so glad they didn't come with us, not just because I don't want to hang out with them, much less be seen with them in public, but also because it was so windy. And crowded. The thought of being stuck on a windy beach while it is still a bit cold out, being pregnant, no clean bathrooms for miles and having my in-laws along sounded like a recipe for disaster.

But our day got weirder.

At Carrefour, we grabbed a few food items. We were hungry because it was well into lunchtime. Jeremy got some noodle dish and some Chinese sausages. He promised we could go see the kebab place on our way out. For those of you that live here, just a few doors down from the Subway in the Hong Kong Road Carrefour is a kebab place. I've no idea how new it is, but it smelled great, looked clean and had me salivating. We rushed off to shop first though. Jeremy put our shopping basket down in the aisle with the toys to catch a break. As I chose from the dolls, I noticed someone had taken our basket. Both of us figured an employee had thought it was abandoned and moved it away. We circled the area and finally found it in a cart next to a store employee. But she wasn't the one who took it! She pointed down the electric ramp leading back down to the supermarket area of the store at a couple that had put it down just a moment before. Jeremy chased after them. So did I, clutching our basket of ice cream, sprinkles (for Raelynn's birthday cake), ,shampoo, soap, toothpaste, noodles and already-paid-for sausages. I couldn't understand the conversation my husband was having with them at all and that is probably because, my husband explained, that these people were just plain strange. He said they offered no reason why they picked up a basket full of food and added one drinking glass to it (random!) and one of those mesh sponges you used in the shower and then decided to ditch it again elsewhere. I just stared at them and then loudly used every profane word in the English language. Perhaps "fuck" rang a bell with them because they hurried away from us after that. I was so relieved we didn't have to retrace our steps through the store to find all the things we'd picked up prior to them taking our basket though. Or lose the sausages we already paid for at the sausage counter.

By this point, we were starving. Jeremy was really grumpy and being pregnant, I just cried. Realizing he wasn't the only one who was hungry and tired, he led us back to the kebab place. The prices were great and the food was absolutely amazing. I had a chicken gyro and it was such bliss. The baby thought so too because I had a whole series of kicks and bumps from that kid. She really loves trying out different foods, just like her mom. Jeremy ate his noodles and sausages. I gave him a taste of my food and he had to agree this place was awesome. He promised to take me again soon. I don't have any photos because I was too hungry to stop eating and take pictures, but trust me, if you're in that Carrefour, go there instead of the Subway. It rocked, it was clean and the employees were actually friendly and polite, which is really unusual for China.

Once home, I was subjected to the mess that my in-laws had left. Sigh. At least my house was clean all week. This weekend, it is Qing Ming's holiday, which is a holiday to honor ancestors and relatives who have passed on. So although we've got a 3-day weekend, my husband said we had to have dinner with his parents. He said this when the beach plan was scrapped, and I said fine. Dinner at our house was better than being stuck with them and their collective smelliness in our small car for a day.

She made fresh seafood and it was pretty good, but I was still full from my delicious lunch. 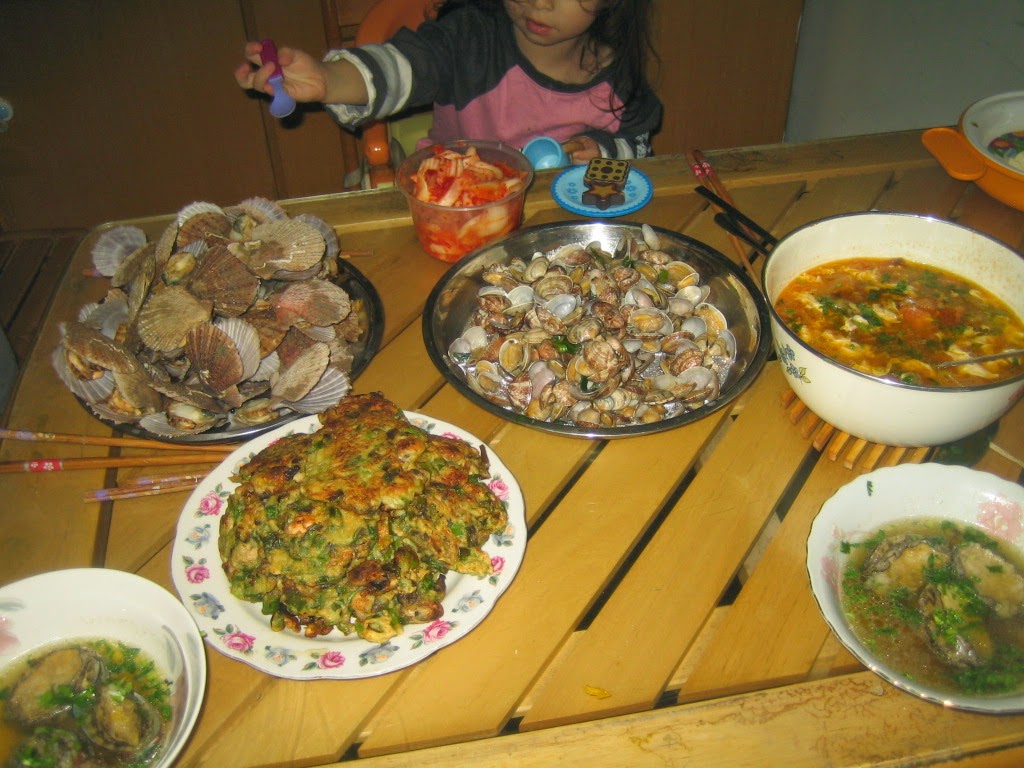 Scallops, clams and abalone. And some weird oyster pancake that I always enjoyed before this pregnancy. There's also some kimchi, thanks to Jeremy's boss. He was given a giant box of the stuff to take home. I love kimchi and this one made our whole refrigerator smell delicious but I couldn't eat more than one bite. It was just too spicy for me. 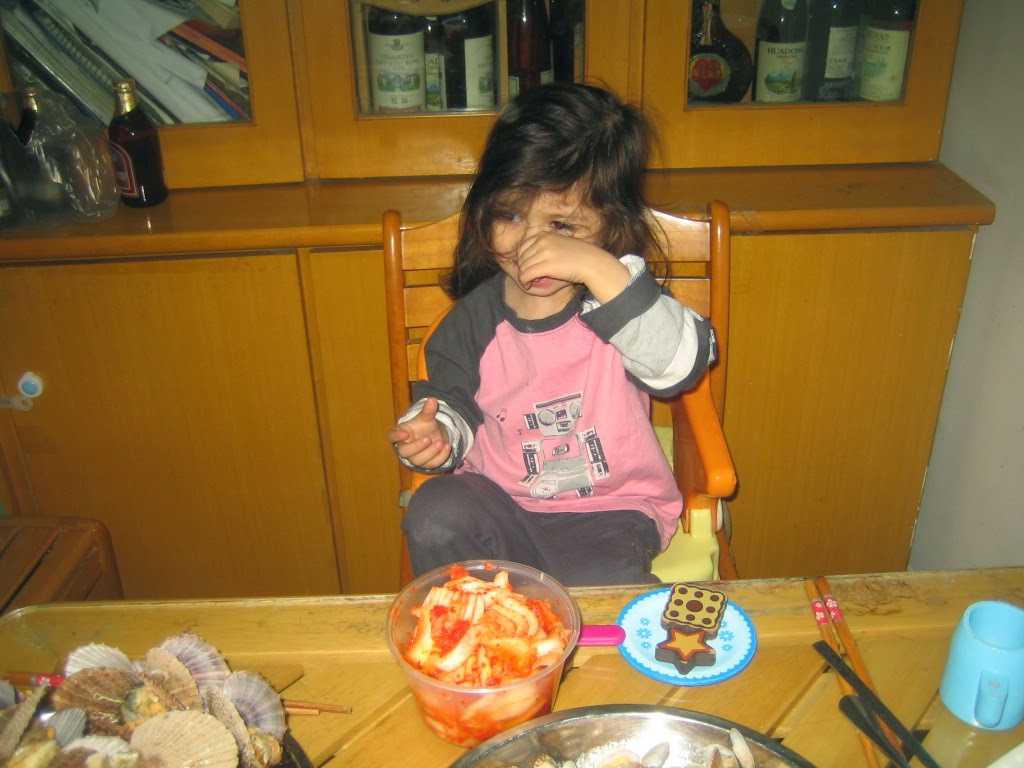 Raelynn ate lots of clams too. She loves them! 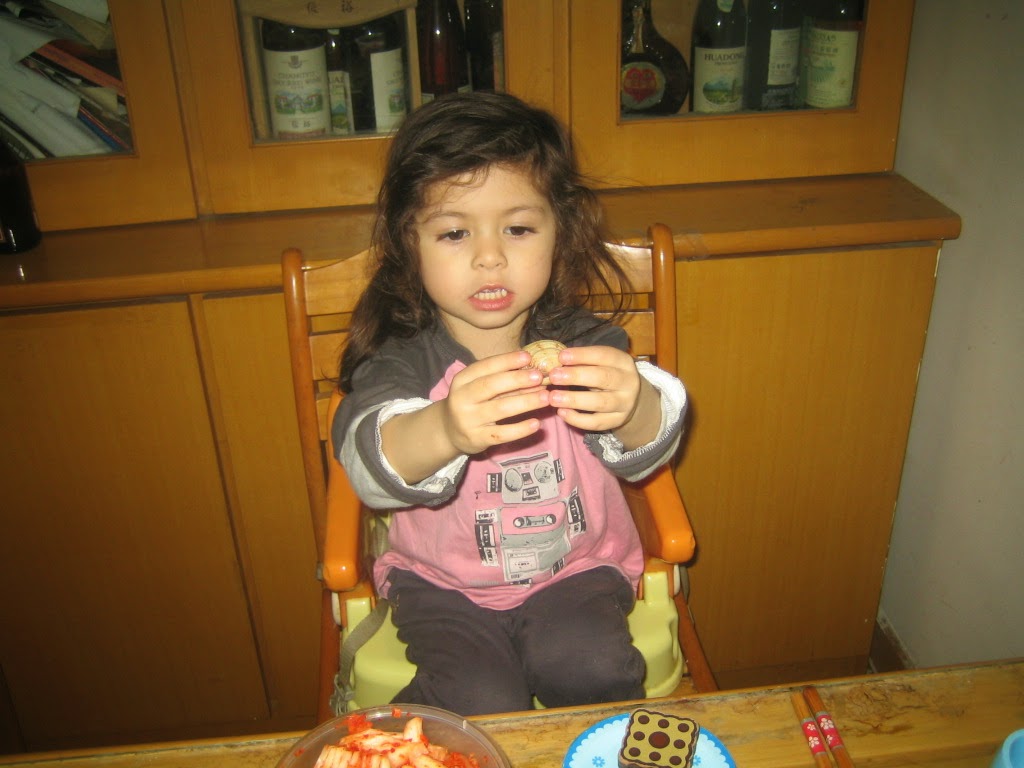 Here she is getting ready to eat another one. I think she probably ate 20 of them herself.

All in all, our day worked out well. But it really did make me think about all the strangeness constantly surrounding me here. There is always something strange happening around me, but of course, my in-laws take the cake on strange indeed!