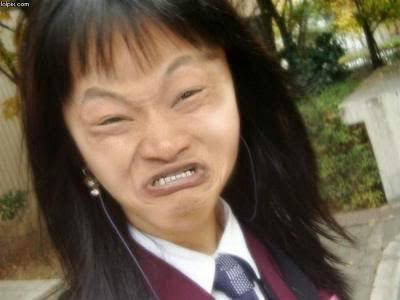 This photo is NOT of the crazy woman described in the post. Much thanks to Google for turning up this ge.

Just when I think I can't possibly be more aggravated with being in China, we had an encounter with a truly insane person on Sunday. Remember the crazy lady in the library? This next one just might be even more certifiable.

Church services are now held at the Crowne Plaza. We're still getting used to that but they sell cupcakes there for 10 rmb, which is a pretty sweet deal. In any event, we'd gone to the first floor so I could use the bathroom. It's a long wait if you ever try to use the bathrooms on the same floor as the services. As I went into the bathroom, I asked Raelynn if she needed to go. She said no and stood with Jeremy outside the door. But as the door closed behind me, she shouted to me that she needed to go.

So in she came. I let her go first and then I had her stand outside the stall, which I now regret, so I could go. The stalls are small and I had Seoul strapped to me. The stall doors were wooden with slats in them so I could still keep an eye on her. If I hadn't known Jeremy was right outside, I'd never have just had her stand in front of my door by the sinks. But I had a misplaced sense of safety. As I peed, I heard a woman come in. She began asking Raelynn lots of questions, like how old she was for example. I could tell from her accent that she was Asian even though she spoke English. I called to the woman and told her to please leave my daughter alone. "I'm her mother," I shout but she ignores everything I say. I whip out of the door and the woman is trying to coax Raelynn to go out the door. She's holding the door open and I can see Jeremy outside.

"What is wrong with you?" I shout at the woman. Now I'm furious. She ignores everything I say to her in English and obviously speaks English rather well and she turns to me and speaks in Chinese! What the hell?!? She tells me she was just taking the girl to her father. "That's not your business! I told you to stop bothering my daughter and you kept talking to her!" The woman begins pleading to Jeremy that she was just trying to be nice and this is the thanks she gets.

Jeremy is trying to make her go away. And he tells me it's because she IS crazy. He explains that when he was working at the nearby bank branch selling financial insurance, she came in a lot and she was totally crazy. Well, damn! No duh!

Mental illness is a huge problem in the world, especially here where no one wants to admit anything is wrong. Add to that the hierarchy-style society and you have a lot of messed up people walking around here with no one doing anything to help them because "it would be insulting to them." Yeah. It's sad, but hopefully people here will start catching on that this is a real problem and these are real illnesses that shouldn't be just swept under the rug and ignored.

I learned my lesson though...even if Jeremy IS indeed standing right outside the bathroom door, I will keep Raelynn and Seoul in the stall with me until I'm done. Especially next time we go to the Crowne Plaza. Eek!
Posted by JQ at 5:14 AM