Well, I didn't have to wait very long for my in-laws to come intrude upon my lovely winter vacation. We all could have predicted that as easily as the sun will rise in the morning, couldn't we? Despite being forced to endure their dreadfully boring company, I made the best of it. How, you ask? By taking photographic evidence for this blog of course!

Recently, I posted about how my husband kindly added an ugly but useful shelf in our kitchen, thus freeing up more counter space. I vowed to capture the destruction of my kitchen. I was actually quite curious just how much more of a mess she would make now that she had extra space to make it in. The results are kind of surprising. 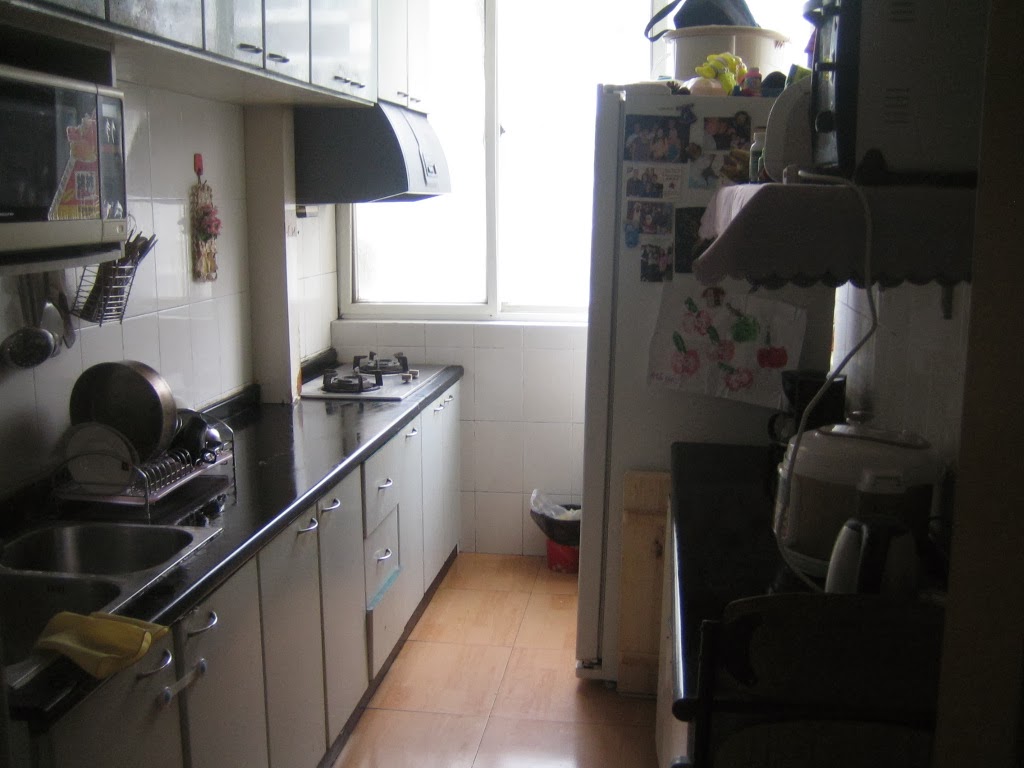 First, here is what my kitchen looked like yesterday afternoon, before the trolls arrived. It's clean and tidy and smell-free (though you can't see smells, good or bad). 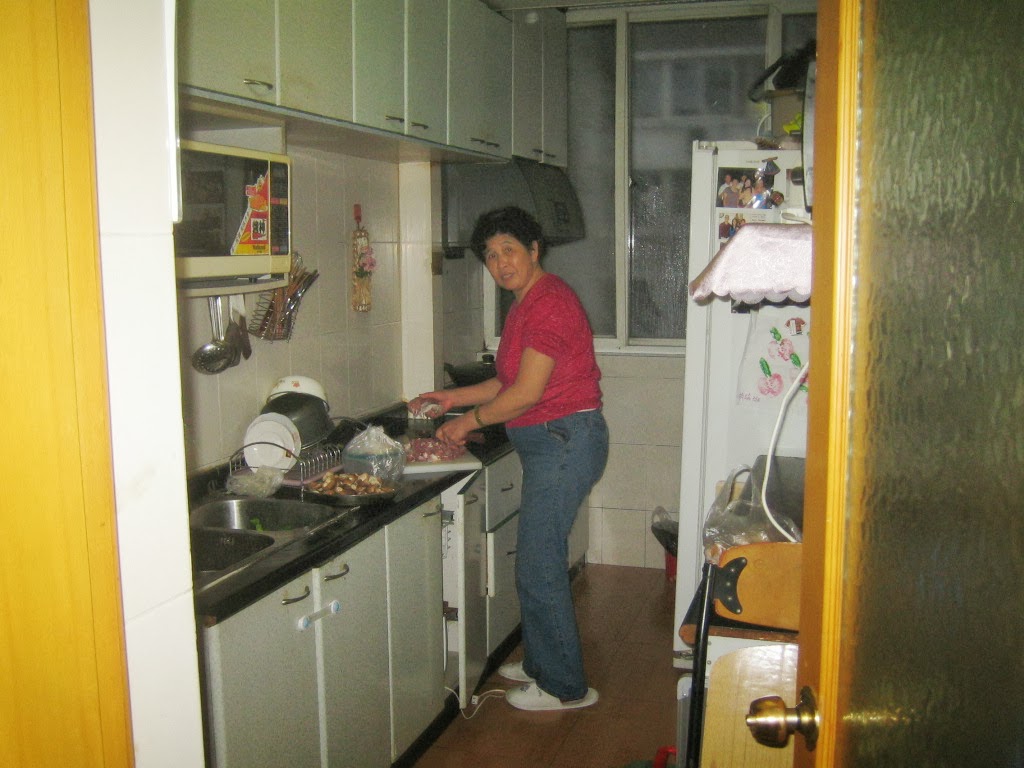 Fast forward to yesterday evening and here is the queen troll herself preparing lamb meat. She claimed it was lamb anyway. But my kitchen smelled like a wet dog on a hot day. Surprisingly though, she hasn't made too much of a mess at this point. The counters are relatively uncluttered. 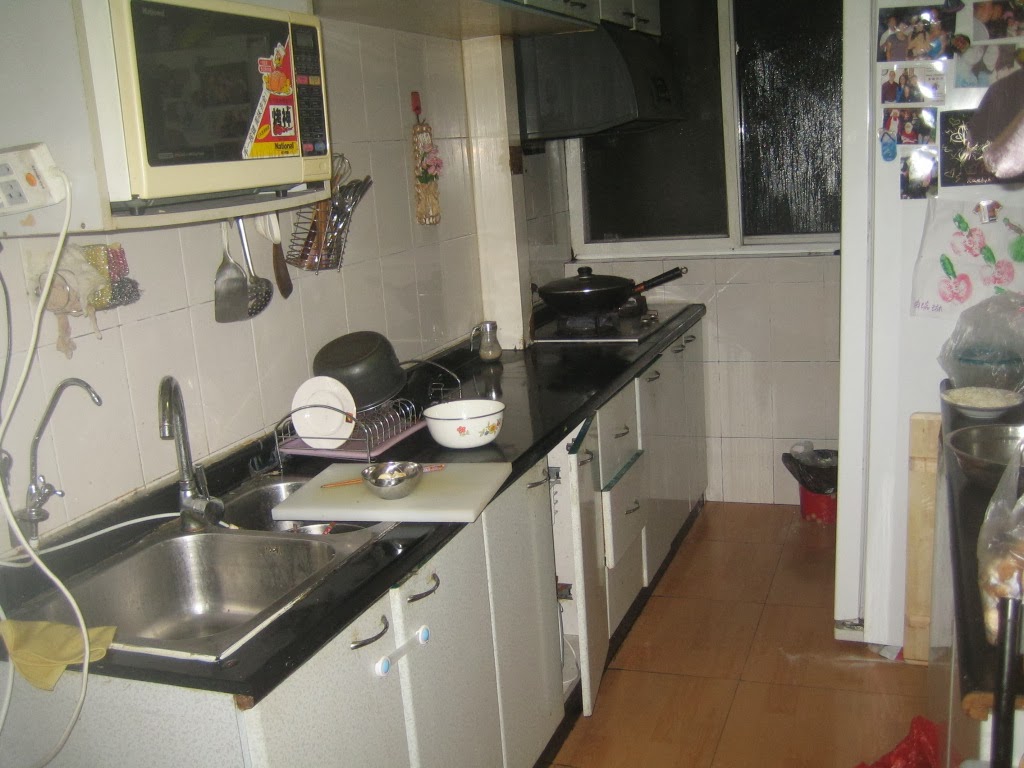 She called us all to the table. The food was ready. My husband had called to say he'd be stuck with a dinner meeting but moments later, it was canceled. Still, I was stuck hanging out with my in-laws alone until he made it through the rush hour traffic. Gross food and lame company. Hooray! Anyway, here's my kitchen aftermath. I honestly expected way worse. Could she be mending her ways? There's some things on the counters and a bag on the floor but this is clean for her.

So what did she make anyway? 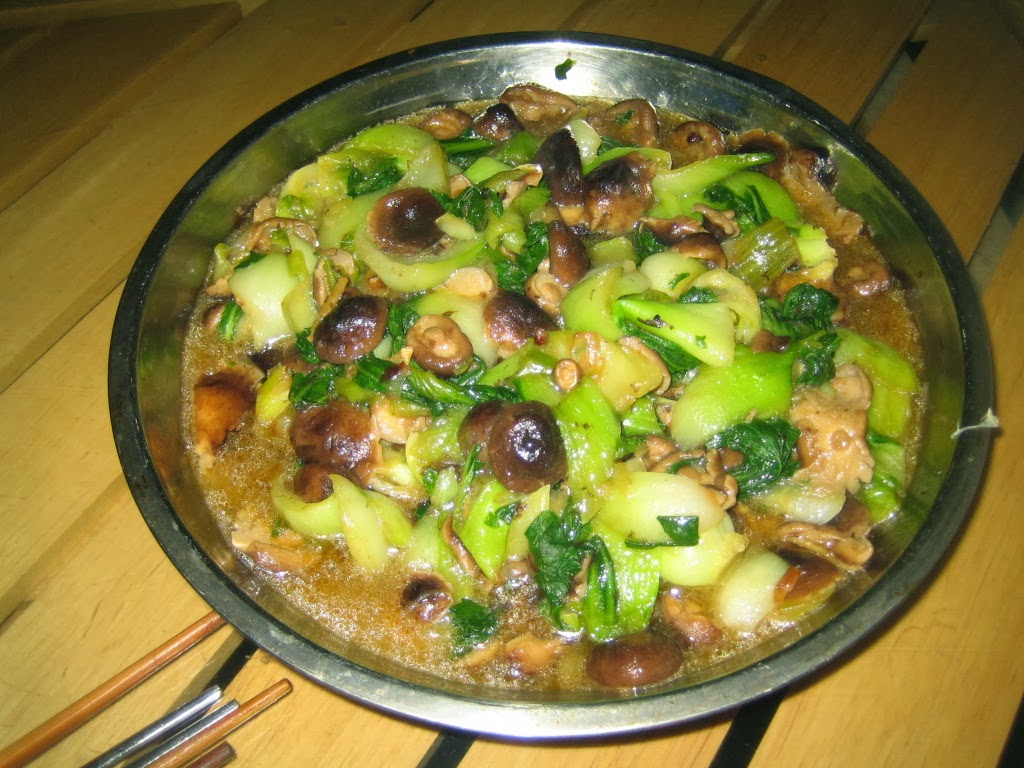 This is some sort of bok choy with mushrooms and I *think* pork in there too. It wasn't horrible, but like all her dishes, brown. And soy saucy. And salty. 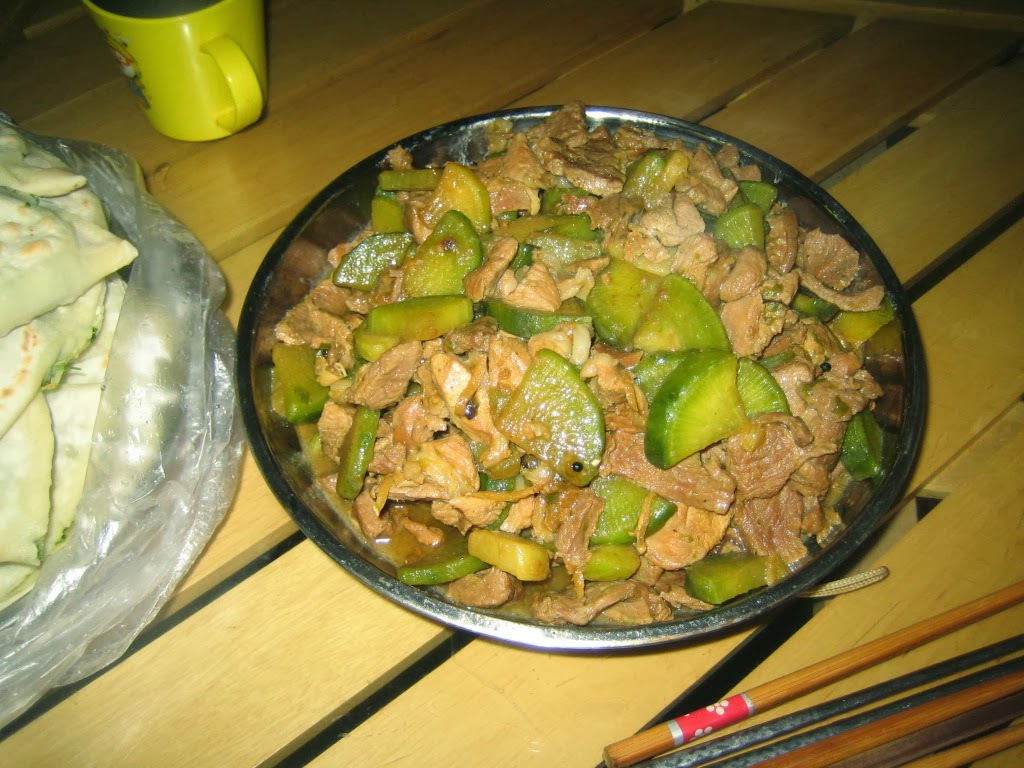 Next up, she's cooked the lamb with luo bo. LUO BO! That's that horrid Chinese radish. It smells HORRIBLE when you cook it. Like farts and death from one thousand years before. No wonder my kitchen stunk like high hell! How did it taste? Well, the meat was okay, but a bit too salty for my taste. I refused to taste the luo bo. I'll eat it raw, but usually only when my husband forces me to. 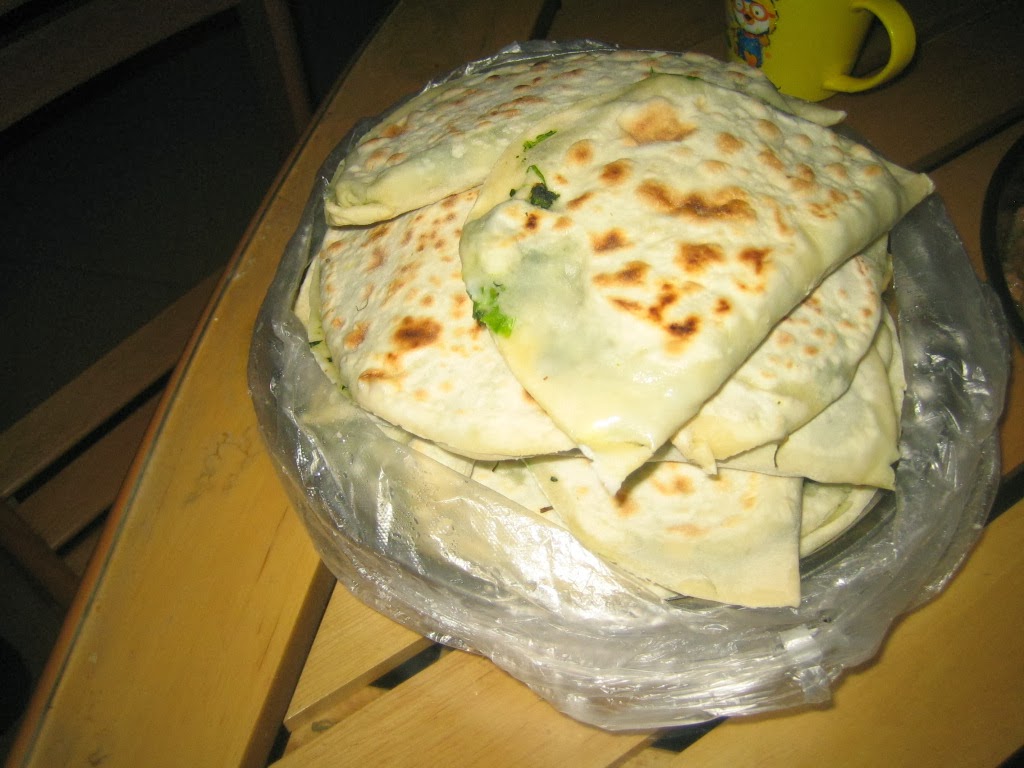 Then thank the good Lord above for this. It was the only thing that saved me. It's a flour tortilla filled with some spinach, a little egg and very tiny shrimp. These things are delicious. Well, when she doesn't overdo it with the krill-like shrimp. This time, she did a great job with these. 4 of these comprised my entire dinner.

I was beyond shocked that my kitchen escaped with so little damage. Perhaps she's improving, I'd thought to myself.

Of course, at 6am this morning, MIL called us to tell us she was bringing us a rice soup. See, it's some very minor Chinese holiday according to their lunar calendar. And according to annoying old Chinese people, they should intrude on your morning with this rice soup. And on your evening with dumplings. I just can't get rid of these people, can I? All I wanted was a peaceful vacation. Maybe I should have told Jeremy that YES! Let's go up to polluted and freezing Harbin for the ice festival. With a potty-training toddler, it will be even more fun peeling frozen-peed-on-pants off her ass. Way more fun than the in-laws. But no. Stupid me.

In any event, the soup came and MIL promptly left (I wasn't as lucky for dinner as my in-laws hung around like a bad fart on a humid day). I went into our cabinet to get some bowls to ladle the soup into. And that's when I discovered that MIL had indeed left us something oddball. She didn't turn over a new, improved and cleaner leaf. Oh no. She just hid it. 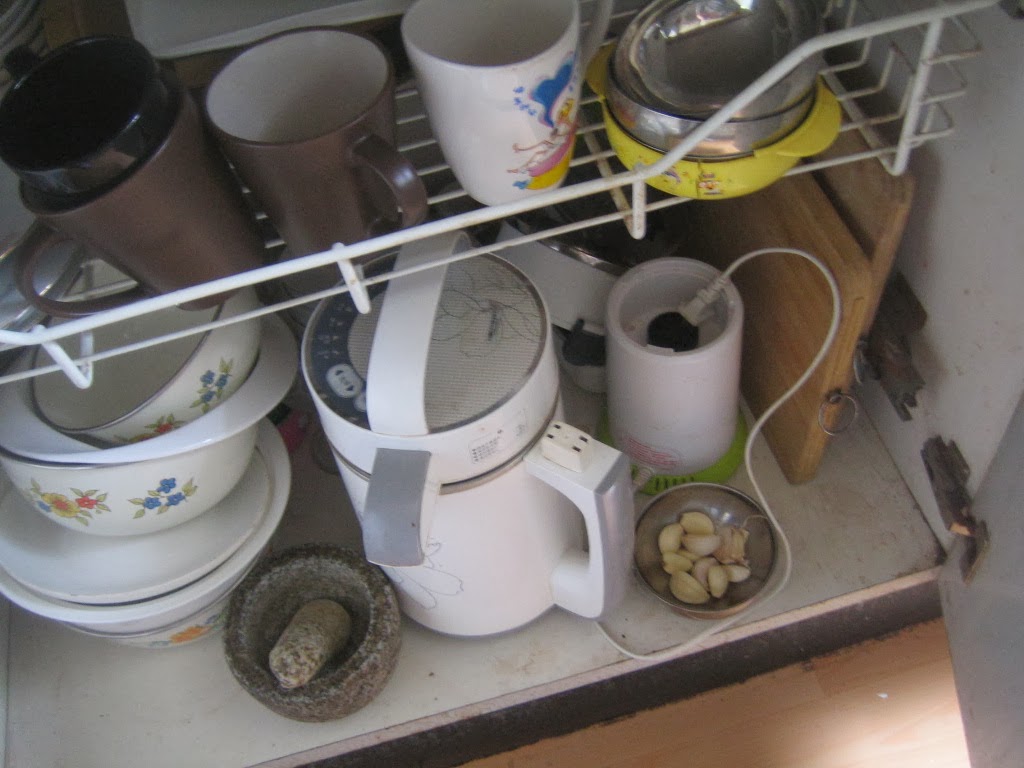 Hey, there's something in this bowl already. What is it? 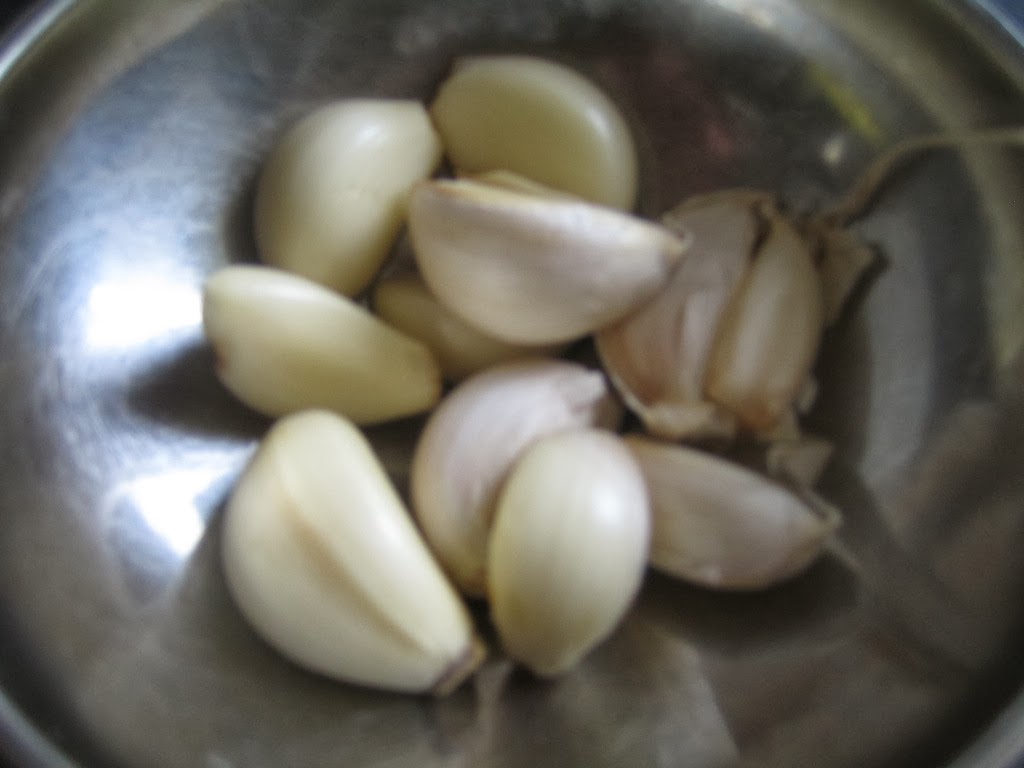 Far less gross than other things she's left for us in our cabinets, this time it was peeled raw garlic. Why? I have no idea. If she didn't gobble raw garlic up faster than Jeremy, Raelynn or I eat a bag of Doritos, I would wear it to thwart her from coming. But no. That would just attract her. So what WOULD repel her then? Soap? Suggestions are welcome!
Posted by JQ at 6:00 AM

Email ThisBlogThis!Share to TwitterShare to FacebookShare to Pinterest
Labels: Annoying Chinese Things, Annoying In-Laws, Holidays, Someone Made Me Eat This, WTF, Yuck